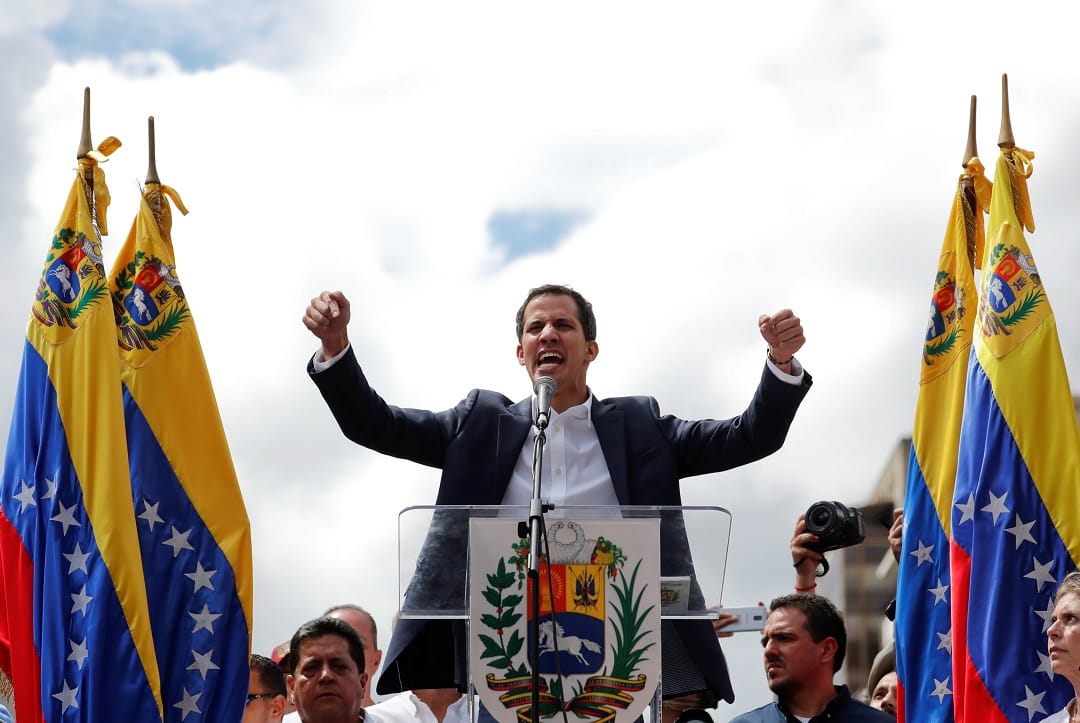 In Venezuela, a High-stakes Gambit

The Venezuelan National Assembly’s chairman, Juan Guaidó, has declared himself interim president, with the support of several foreign governments. Unless the Venezuelan military backs his move, it is unlikely to topple incumbent President Nicolás Maduro and could unleash greater repression and even outside military intervention.

What is happening in Venezuela?

On 23 January, amid a mass opposition demonstration that brought hundreds of thousands onto the streets of the Venezuelan capital, Caracas, opposition politician Juan Guaidó, chairman of the National Assembly – now the institution with the most democratic legitimacy in the country, given it was elected in Venezuela’s last free and fair elections in 2015 – announced that he was assuming the presidency of the republic, in defiance of President Nicolás Maduro, who was sworn in for a second term only two weeks earlier. Following several days marked by public assemblies, wildcat protests and a small military uprising against Maduro, opposition parties in the Assembly backed Guaidó’s move. He was immediately recognised as president by the U.S., Canada and a dozen other western hemisphere nations, including Brazil and Colombia, leaving Venezuela with two men claiming to be president.

Who is Juan Guaidó and why has he proclaimed himself president?

Juan Guaidó is a 35-year-old member of parliament from the opposition Voluntad Popular party. He was elected chairman of the National Assembly on 5 January, in accordance with an opposition agreement to rotate this position among the different political parties. His name and face were unfamiliar to most Venezuelans because he was a relatively low-ranking member of Voluntad Popular. This party’s leader, Leopoldo López, is under house arrest; number two Carlos Vecchio was forced into exile; and number three Freddy Guevara, fearing arrest, recently sought asylum at the Chilean embassy, leaving the party in the hands of more junior politicians unknown to the public. But this has proven an asset to the opposition, whose jaded supporters welcomed a fresh face and flocked to public meetings in support of his plan for a transitional government. A variety of governments across the Americas view elections on 20 May 2018 that saw Maduro win a second term in office as fundamentally flawed, and support the opposition’s claim that he is now usurping the presidency. Guaidó has asserted the right to assume an interim presidency, under Article 233 of the Constitution, which determines that if the National Assembly rules the president is failing to meet his or her basic duties or has vacated the post, the chair of the Assembly is entitled to assume power temporarily and declare elections within 30 days.

What is the likely impact on the Venezuelan crisis?

The calculation of the opposition and its foreign allies appears to be that by claiming the interim presidency, demonstrating massive popular support across the country and among all sectors of society – including from former government loyalists enraged by hyper-inflation and food scarcity – and obtaining powerful international backing, Guaidó will force a split in either the Maduro government or, perhaps more critically, the armed forces. If elements of the military with sufficient firepower were to break with Maduro, they could force him from power or oblige him to negotiate his departure from office. In theory, this development would enable Guaidó to take the reins of government and call fresh general elections.

If Maduro retains the armed forces’ support, he will almost certainly seek to stay in power and violently crush those who are challenging him.

While it is still early, thus far no senior military official or leader of military units has announced support for Guaidó’s interim government. Indeed, the high command pledged its continuing loyalty to Maduro. For now at least, the split the opposition hoped for has not materialised. If Maduro retains the armed forces’ support, he will almost certainly seek to stay in power and violently crush those who are challenging him.

The question is whether the opposition or its foreign backers have a back-up plan. If not – and there is no overt sign that they do – and if their current plan does not succeed soon, their position could become extremely precarious, as they will be vulnerable to a Maduro crackdown. At that point, the ball will return to Guaidó’s foreign backers’ court. They could then face the uncomfortable dilemma of doing little and appearing impotent, or courting disaster by intervening militarily.

What role do foreign governments play?

President Trump has said he will hold Maduro “directly responsible for any threats it may pose to the safety of the Venezuelan people”. Soon after Washington recognised Guaidó as president, Maduro broke diplomatic relations with the U.S. and ordered its diplomats to leave within 72 hours. Washington has refused to pull them out, saying it would only recognise the actions of the new government.

The European Union and some other Latin American governments are still calling for a negotiated solution leading to free elections.

The standoff raises the prospect of several dangerous scenarios. Supporters of Maduro or the security forces could organise a siege of the U.S. embassy in Caracas. Maduro could also call Washington’s bluff, and crack down on his detractors anyway, assuming that threatened actions will be limited to more sanctions, perhaps including an oil embargo, and that he can withstand the pressure. Though President Trump over the past year has occasionally hinted that a foreign military intervention could oust Maduro, there are no signs such an intervention is imminent. That could change depending on the way U.S. diplomats are treated or should the sitting government decide to arrest or persecute the presumptive president or dissolve the National Assembly.

Other governments in the hemisphere that have recognised Guaidó are likely to follow the U.S. lead in applying more sanctions. But the international community is far from united. Russia, China, Turkey, Iran and several Latin American nations, including Bolivia, Cuba and Nicaragua, have given their backing to Maduro. For their part, the European Union and some other Latin American governments, notably Mexico and Uruguay, are still calling for a negotiated solution leading to free elections, even as the EU in particular has been vocal in its support for the Assembly’s campaign to restore democracy in Venezuela.

This latter course still seems the least dangerous path out of the crisis. But success will depend in part on firm international support to create conditions for meaningful talks. The EU has proposed establishing a Contact Group, aimed at bringing together opponents and allies of Maduro. Such a group, which should be broad and include countries viewed as neutral, would represent an important step in this direction. Whether Maduro is toppled or not, reaching a workable political settlement between his supporters and those of Guaidó will be crucial to achieving a peaceful and sustainable transition. This is all the more important in light of the presence of numerous state and non-state armed factions on Venezuelan soil and the urgent need to stabilise the collapsing economy.