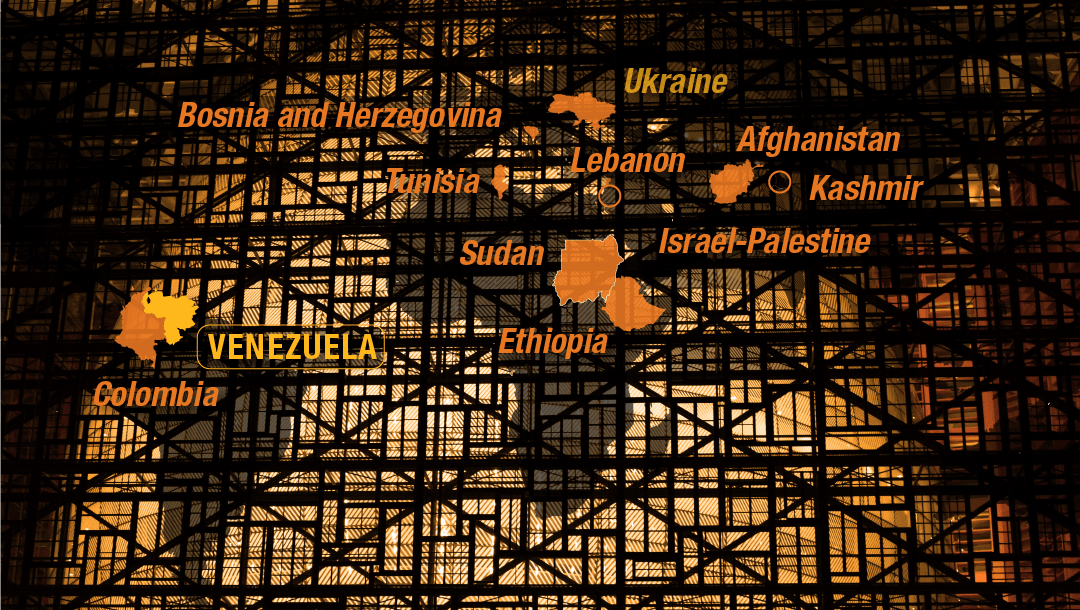 The deadlock between President Maduro's government and the opposition is generating a humanitarian emergency in Venezuela. In this excerpt from the Watch List 2022, Crisis Group urges the EU and its member states to maintain contact with all opposition groups, engage with the government to restore representative politics and the rule of law, support international efforts for negotiations and increase aid.

Venezuela remains immersed in a complex humanitarian emergency whose principal component is political deadlock between President Nicolás Maduro’s government and an increasingly fragmented opposition. The U.S. and a handful of its close allies continue to recognise Juan Guaidó, former president of the National Assembly, as the country’s legitimate acting head of state. But Guaidó’s authority over the multiparty Unitary Platform alliance he nominally leads has waned since controversial legislative elections in December 2020 – boycotted by the main opposition parties – restored control of parliament to Maduro. The failure of Guaidó’s strategy of forcing Maduro from power through external (primarily U.S.) pressure has reduced his popularity to a level similar to that of the president. The Platform’s decision to participate in the 21 November 2021 local and regional elections, over Guaidó’s objections, increased his isolation, especially after he refused to campaign for its candidates. Bitter accusations of corruption in the handling of foreign assets by his “interim government” have further damaged opposition unity.

Over the past year, Maduro’s authoritarian government has created a narrow political and economic opening, offering a slightly more level electoral playing field (in particular an electoral authority with two officials from the opposition side) and liberalising economic policy by relaxing state controls, quietly allowing de facto privatisation of many state-owned businesses and permitting large-scale dollarisation. In August 2021, it returned to Norwegian-facilitated negotiations the two sides abandoned in 2019, signing a memorandum of understanding in Mexico City with a delegation representing the Unitary Platform. But little was agreed in the ensuing talks, and the Maduro government suspended its participation in October, after businessman Alex Saab, a key ally of the president, was extradited from Cape Verde to the U.S. to face money-laundering charges.

In these circumstances, the European Union (EU) and its member states should:

The Venezuelan economy has shrunk by around four fifths since President Maduro took office in 2013, provoking a mass exodus of around one in five Venezuelans. A combination of corruption, mismanagement and economic collapse has wrecked the country’s infrastructure, leading to frequent large-scale blackouts, chronic energy and water supply problems, a breakdown of public and private transport, and a critical lack of medical services. U.S. economic sanctions, particularly on the oil industry, have exacerbated the situation. Under Maduro, the statistics the Venezuelan state makes public are sporadic and unverifiable, hindering efforts to ascertain the true extent of everything from economic damage to crime to the impact of the COVID-19 pandemic. An annual survey by major universities estimates the poverty level at 94 per cent.

In recent years, the government has begun to allow in foreign humanitarian aid, notably through a 2021 agreement with the World Food Programme. But hunger, disease and malnutrition remain widespread and available welfare programs – whether run by the state, by local and foreign NGOs, or by multilateral agencies – fall far short of what is required. Poverty has left large segments of the population, in particular women and girls, highly vulnerable to human trafficking, especially for the sex trade in neighbouring countries.

A last-minute agreement among the main opposition parties permitted Guaidó to renew his controversial mandate as “interim president” just before it ran out on 5 January. His claim to the office is based on the contention that the democratically elected 2016-2021 National Assembly remains the country’s true parliament, despite the election of a new legislature in December 2020 in a poll the mainstream opposition boycotted and dismissed as a sham. But the opposition is deeply divided and dysfunctional. Its leadership, including Guaidó, has come under severe internal criticism over allegations of corruption and incompetence regarding the management of Venezuela’s overseas assets.

The more fundamental split is, however, over strategy. The failure of the U.S.-led “maximum pressure” campaign to oust Maduro – centred on foreign (and especially Washington’s) backing for the Guaidó “presidency”, economic and individual sanctions, and an election boycott – persuaded the Unitary Platform to take part in regional and local elections in November 2021. Yet Guaidó and his hardline allies declined to join the campaign. The result is a paradox: a movement whose leaders do not share its ideas about how to proceed. The disagreement is due in part to the perverse incentives created by external recognition of the interim government, which has impeded efforts to renew the opposition’s political leadership on the basis of popular support in Venezuela. Moreover, opposition parties outside the Platform now represent a significant body of voters.

Obliged to adapt to economic collapse and U.S. sanctions, the Maduro government has embarked upon somewhat chaotic economic reforms, partially dollarising the economy and returning many state-owned businesses to the private sector in opaque transactions. It has also achieved a modest increase in oil production. Without resolving the country’s severe economic crisis, these changes have halted the decline in GDP and made life easier for a minority of the population – particularly those who are able to earn dollars.

Reform has also allowed a modicum of democracy within the ruling United Socialist Party of Venezuela, raising the possibility that political as well as economic change might come first from within the ruling party rather than from its adversaries’ activity outside. In turn, this development strengthens the hand of those in the mainstream opposition movement who argue for a less confrontational stance toward the Maduro government.

Even so, the opposition leadership rejected moves in 2020, led by former opposition presidential candidate Henrique Capriles and others, to negotiate partial, ad hoc agreements with Maduro, insisting that only a comprehensive, all-or-nothing settlement including free and fair presidential polls was acceptable. Talks in Mexico City on such a deal, facilitated by Norway, began in August 2021, but little progress was made and the government suspended its participation two months later, after Cape Verde extradited its ally Alex Saab to the U.S. At the time of publication, the talks remain on hold.

A solution to Venezuela’s political and economic crises is not likely in the short to medium term, and when it eventually emerges it is likely to be in the form of a process rather than an event. Along with the armed forces, the Maduro government – or at least a faction of it – is set to play an important (and probably guiding) role in any move toward a settlement. Progress will require complex and lengthy negotiations, preferably building on the suspended Norwegian-facilitated process but bolstered by additional external support. In order for talks to succeed, however, the opposition coalition must resolve its decision-making and strategy disputes; restore its credibility with the electorate, crucially (but not exclusively) by ensuring that party leadership’s choices respect internal democratic preferences; and broaden its base by reaching agreements with those non-Platform sectors that are not mere appendages of the government.

The EU and its member states ... [should emphasise] gradual change and engagement with the Maduro government.

One task of the EU and its member states, along with other external parties seeking an end to Venezuela’s crisis, is to encourage the various opposition factions to take this route, emphasising gradual change and engagement with the Maduro government and its foreign allies. As far as possible, they should encourage moves toward greater opposition unity and avoid laying emphasis on support for the “interim government”, whose authority over the opposition as a whole and role as an agent mobilising political loyalty is likely to diminish further. They should also seek closer policy alignment among the opposition’s main external backers, especially by urging Washington to back renewed negotiations with an explicit roadmap that lays out how sanctions can be first eased and then lifted in return for progress toward a settlement involving free and fair elections and restoration of constitutional rule. Plans for electoral reform should draw on the findings of the EU observation mission for the November 2021 local and regional polls, while an agreement should include guarantees that the losing side in a future vote will not suffer persecution. An ideal settlement would also include transitional justice arrangements that would rectify the prevailing impunity for crimes against humanity allegedly carried out during the political conflict, to the satisfaction of the International Criminal Court and with the government’s consent.

A second task is to keep close contact with the Maduro government as well as the Venezuelan armed forces. The EU and its member states should press these interlocutors to specify what incentives they might accept in exchange for allowing the revival of peaceful political competition as part of a deal like that outlined above. In tandem, European diplomats should also urge the Maduro government’s outside partners, including China and Russia, to put their weight behind the search for a negotiated solution that restores economic growth and stability, as well as addressing both their own concerns and those of the government.

Should negotiations to resolve Venezuela’s crisis start once more, a third job for the EU and its member states is to offer incentives and targeted material support to encourage both sides to agree on the difficult compromises required to restore peace, democracy and security. Meanwhile, the EU should urge the opposition to establish a non-partisan model for management of the external assets that are in its power as well as provide guidance as to how the dispute over these assets might be settled in a final agreement.

In parallel with these diplomatic efforts, the EU should significantly increase financial support (to a level much closer to what it grants to countries closer to its borders) to attend to both the Venezuelan migrant crisis in the region and – through negotiations with government officials at various levels – problems of malnutrition and disease inside the country. Of concern is the disproportionate impact of poverty and migration on women and girls, who are especially vulnerable to the increasingly prevalent phenomenon of human trafficking. The EU and its member states should use their influence on regional governments to persuade them to fully implement provisions of the many international laws and treaties that prohibit human trafficking and sex slavery, especially the Palermo Protocol to the UN Convention Against Transnational Organised Crime.