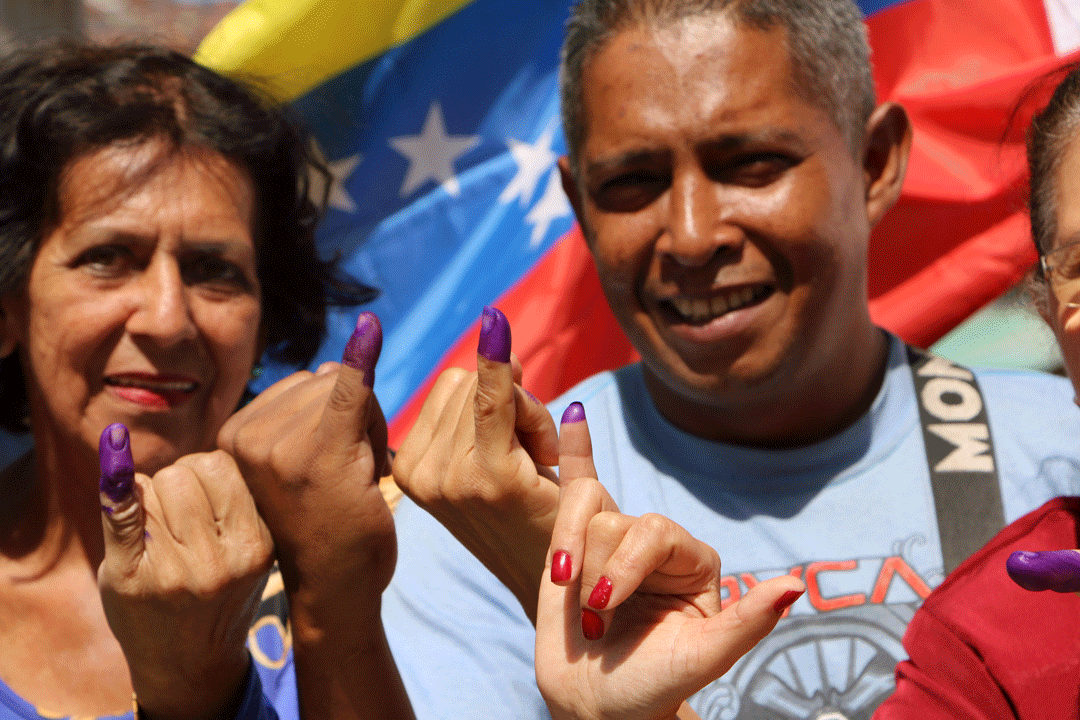 Venezuela’s opposition Democratic Unity coalition (MUD) won more than twice as many National Assembly seats as the Socialists in 6 December elections to the country’s parliament, a huge reversal for President Nicolás Maduro, heir of the late President Hugo Chávez.

Maduro has conceded the defeat of his party in the parliamentary elections, but he remains president. What does this mean for the way Venezuela is run?

This is an absolutely stunning victory for the opposition. With almost all of the votes counted, on 7 December the opposition had 99 of the 167 parliamentary seats to the government’s 46, virtually guaranteeing a 3/5 majority, with 22 seats yet to be called. This result is beyond the opposition’s most optimistic projections. It will make it very much more difficult for the government to defy parliament or go back to business as usual. It also vindicates the opposition moderates, who have always said that an electoral solution was the best way forward, and that if enough opposition votes were cast, the government would be forced to recognise the result.

It’s very difficult to predict how this will work out within the government. Quite possibly there will be an implosion in its ranks: up until now, losing was inconceivable. The scale of this popular rejection is enormous. If the government were to plough on regardless, social and political upheaval would be inevitable. They now have to wake up, smell the coffee and start behaving like politicians in a normal competitive, democratic system. That means negotiating, which they have always refused to do, point-blank.

The cause of future compromise will be helped by the fact that some radicals in the government lost their seats. It would be an understatement to say that in the past the party was tightly disciplined. There are already a number of figures manoeuvering behind the scenes, so far quietly and not showing their hand. From now on they may have more freedom either to desert the government side, or to start quiet talks with the opposition, within parliament, which is where moves towards some kind of negotiated transition might well begin. We will need to wait until the dust settles to see the lay of the land on both sides. It’s still early days.

How will the power of President Maduro’s government be affected?

Maduro has been severely weakened, as has Diosdado Cabello, the head of parliament. These two men have for the past couple of years been the two most powerful people in the country. But Maduro is still serving out the term he inherited from the late Hugo Chávez, who won the 2012 election, and in normal circumstances would only leave office at the beginning of 2019.

There is a possibility of a recall referendum in the course of 2016, which would lead to fresh elections; however, if that happens any later than next year, the vice president, an appointed figure, would serve out Maduro’s term. If the MUD does obtain a two-thirds majority, convening such a referendum would be easier, though it’s not clear whether they would want to go that route or perhaps merely use it as a threat.

The presidency is still very powerful, and it’s important to remember that the executive controls all other organs of state, especially the Supreme Court. A lot of attention is going to focus on the court’s constitutional branch. This is the government’s trump card: basically anything that anybody does can be ruled unconstitutional by these Supreme Court justices.

The terms of a dozen of the 32 Supreme Court judges will be over at the end of 2016, however. It’s worth remembering that the government, worried that the opposition would win this election, had already set in train a process for changing the composition of the Supreme Court during the term of the outgoing parliament. The justices were forced to resign, but the process got stuck. The new parliament could now accelerate those changes again but bring in new, pro-opposition names. Or the existing Supreme Court justices could conceivably simply switch sides now that they see which way the wind is blowing, which is not unprecedented in Venezuela. Either way, there is the possibility of quick, significant change in the balance of power in the judiciary, which might assist the transition.

What does the opposition stand for, who is its main leader and does it have a coherent strategy?

The opposition is a coalition of a couple of dozen parties, among whom the biggest four or five have the controlling voice. Broadly speaking they are divided into moderates and radicals. The moderates have been strengthened by this election. Their plan for dealing with this crisis – securing transition through the ballot box – seems to have been vindicated. But the result might still tempt the maximalists to go all out for a change of government.

The MUD is coordinated by Jesús “Chúo” Torrealba and he might play a part in any negotiations, but he is not really a professional politician and is not somebody we’d expect to take much political power in the coalition. Justice First party leader Julio Borges looked very happy on election night. He’ll probably have a big slice of the MUD’s parliamentary contingent. But we need the final results before we’ll know who will be the key factional leaders.

One of the issues that will have to be settled very early on is the issue of political prisoners. There are about 70 of them. It’s very hard to imagine the opposition negotiating seriously with the government while these people are in prison. The most important of these is Leopoldo López of the Popular Will party, who is serving a fourteen year jail sentence. 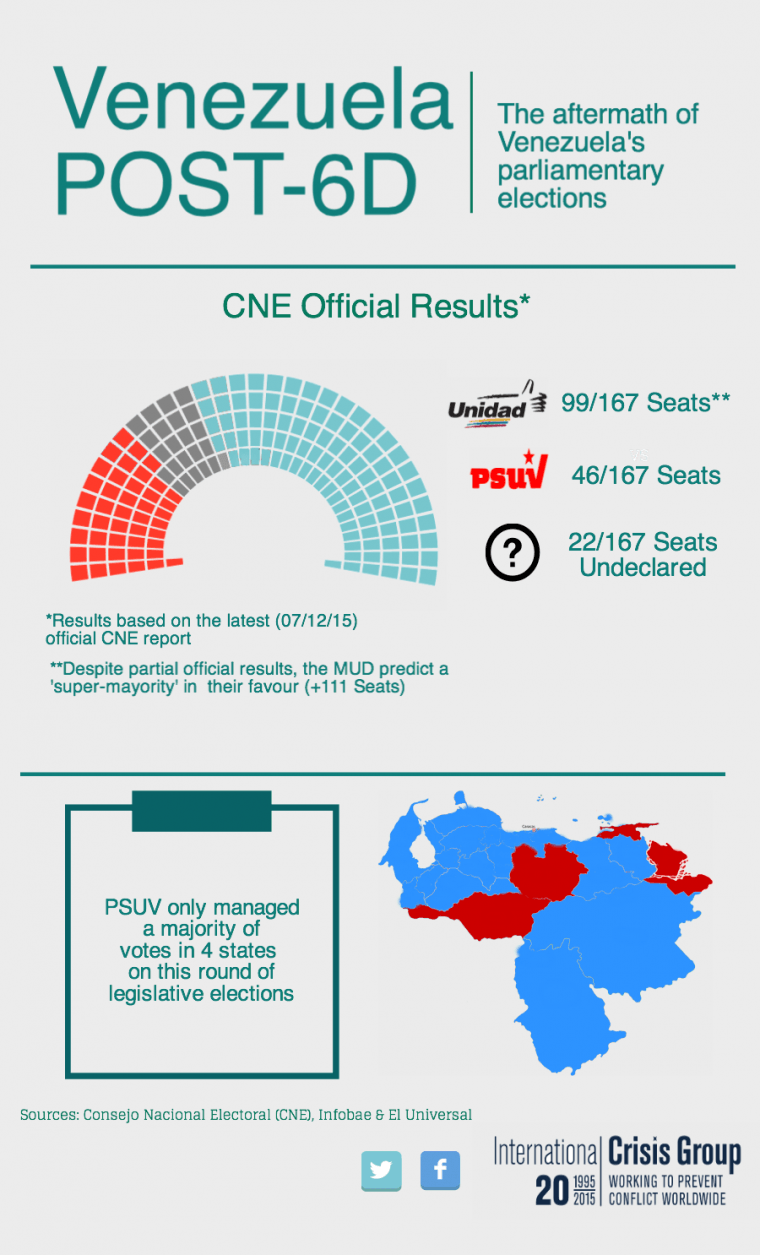 What is the reaction of the Chavistas and how will this play out? Is there any possibility of violence?

The election result was all the more extraordinary for the fact that the opposition wasn’t just facing a political party, it was facing the entire apparatus of the state. The government had no scruples in using enormous state resources – buildings, assets, media – in a bid to just wipe the opposition from the political map. It failed dismally.

There were armed pro-Chavista motorcycle gangs waiting for orders to be sent out. In fact, some did go out. But they retreated very quickly. Maybe orders weren’t given; or maybe they were stood down. The implication is that the regime understands the extent of its defeat.

Even people in the government unwilling to accept how much things have changed must recognise that there is an enormous majority of the country calling for change. The international community was focused, and even some of Maduro’s closest allies told him that he must accept this result.

What has been the role during the election of outside countries, especially those from the region?

The only official observers allowed were from the regional body UNASUR, the Union of South American Nations. Their mission was hamstrung by tight rules and was rather ineffective. But its weakness also reflected divisions within UNASUR. Some powerful UNASUR members including Brazil and Argentina would likely not accept anything but a democratic solution. Even though UNASUR as a whole has been reluctant to show a yellow card to Venezuela, they all have domestic voices critical of the Venezuelan government’s record, and they are worried that Venezuela could destabilise the region with its economic, social and political crisis. There will now be an even greater consensus that Venezuela must be steered back to more democratic government.

In the last days of the election campaign there was also a noticeable increase in attention to the election from outside the region as well, which would have made it even harder for the government to ignore the result.

How do you explain the fact that Venezuela was able to stage such an apparently honest election?

It was a very dirty campaign. The government pulled out all the stops. It violated the constitution, the election law and corruption laws. However most observers believe that the votes that go into one end of Venezuela’s electronic voting system come out of the other end. The government may be able to force some people to vote against their will, but that strategy has now been shown to be of limited usefulness.

Elections under the system installed since 1999 have not been conceived by the government as a means to ensure a peaceful handover of power. They saw elections as plebiscites that they would automatically win because they represented “the people”. The idea of losing is not part of the revolutionary DNA.

In the long run, is the opposition inheriting the whirlwind, with a bad economic outlook, low oil prices, social polarisation?

If they were really inheriting the whole government at this point, yes, it would be bad news for the opposition. The country is in terrible shape: since the fall of oil prices, budget income is down by one third, because Venezuela depends almost entirely on oil earnings.

The opposition doesn’t want to inherit the mess, take the blame, and have to carry out a reform package on its own. So there’s potentially considerable interest in a negotiated solution on the part of the opposition, even among the maximalists. Nobody can afford to take the political hit of carrying out alone what will be a vital but potentially painful economic reform package.

After this election, there’s probably much more realism on both sides. That’s one reason why there’s a better chance now than there was yesterday for a negotiated, peaceful solution to the Venezuelan crisis. But there may still be a long way to go before we get there.