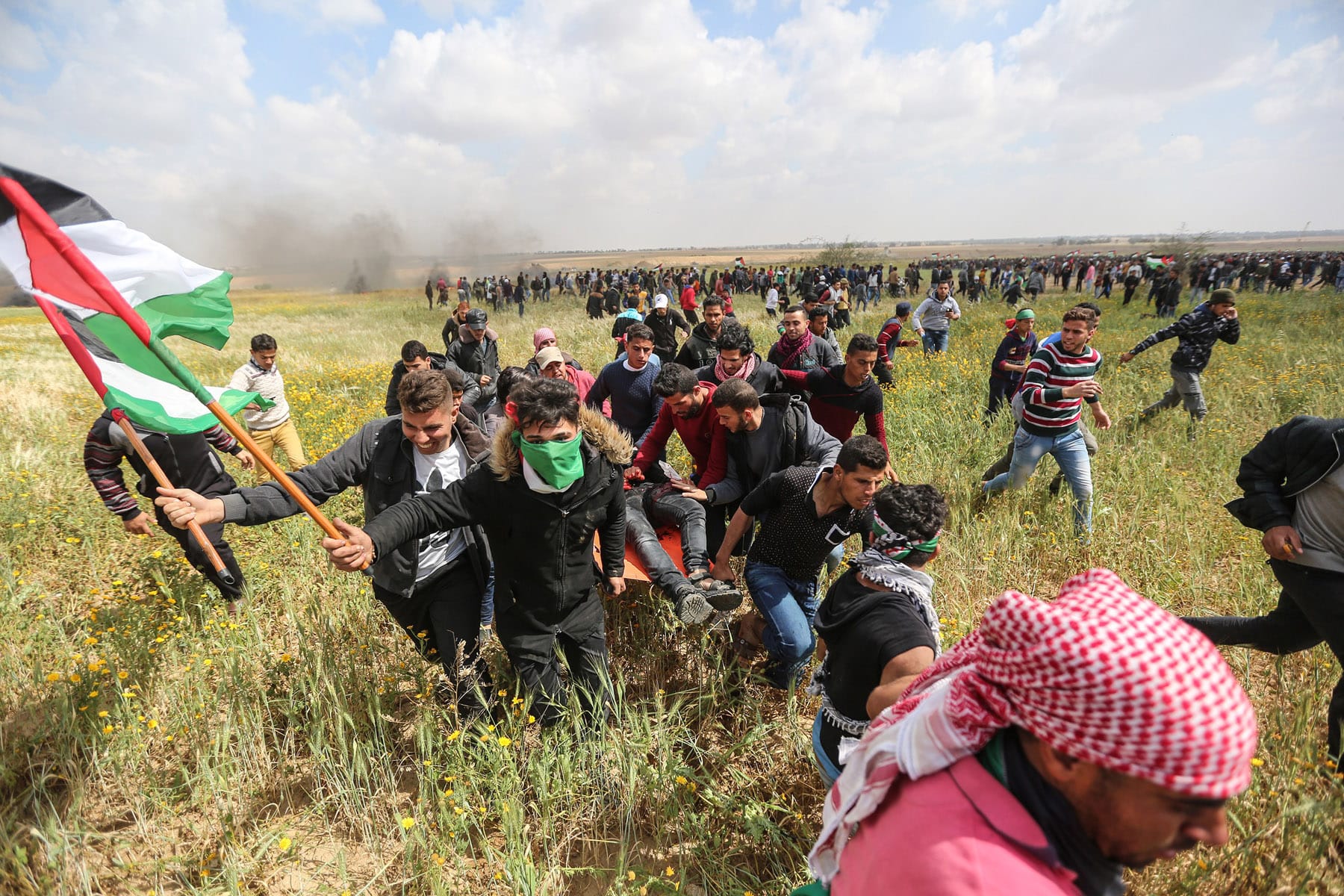 A wounded demonstrator is being moved away from clashes with Israeli forces during the demonstration under the name of the "Great Return March" at Israeli border in eastern part of Khan Yunis, Gaza on March 30, 2018. Mustafa Hassona / Anadolu Agency
Commentary / Middle East & North Africa 02 April 2018

Protests in Gaza on Friday 30 March, at which Israeli forces killed more than a dozen Palestinians, were the largest of their kind in several years and are likely to grow over the coming weeks. In this Q&A, Nathan Thrall, Director of Crisis Group’s Arab-Israeli Project, says the series of planned marches reflect the Palestinians’ determination to take matters into their own hands after losing faith in outside mediation.

Friday was 30 March, Land Day, the annual commemoration of protests by Palestinian citizens of Israel against government appropriation of their lands in 1976. Tens of thousands of Palestinians in Gaza marched toward the border with Israel in what is to be the first of several weekly marches leading up to 15 May. On that day, Palestinians commemorate what they refer to as the nakba, the forced displacement of some 750,000 Palestinians during the 1948 war. Over two thirds of Gazans are refugees from villages in Israel, and this year organisers named the series of events – of which last Friday’s was the largest of its kind in several years – the “Great March of Return”, reflecting the marchers’ demand to return to their original homes. Seventeen Palestinians were killed (two of them near the border but not part of the protests) and over 1,400 were wounded by Israeli live fire, rubber-coated bullets and tear gas. On the 70th anniversary of the nakba this year, Palestinians in Gaza, the West Bank, Lebanon, Jordan, and Syria plan to march on Israel’s borders and may try to cross them.

Last Friday, marchers converged on the Gaza-Israel border fence in five locations. The two largest protests took place east of Gaza City and east of Beit Hanoun, in northern Gaza. The other three were east of the Bureij refugee camp, in central Gaza, and east of Khan Younis and Rafah, both in southern Gaza. The majority of the protests were peaceful and remained at a distance of some seven hundred metres from the security fence, though several hundred younger men approached the fence at various points, including within the three hundred metres limit set by Israeli authorities, throwing stones or attempting to plant a Palestinian flag on it. In the days prior to the march, several Gazans, some of them armed, had penetrated the fence and entered Israel. Close to the end of the day, two armed Hamas gunmen, separate from the protesting crowds, tried to approach the fence and were killed by Israeli forces, which took their bodies into Israel.

The number killed on Friday is large for a single day, but it follows numerous deaths during unarmed protests along Gaza’s border in recent years. In the three weeks following President Donald Trump’s December 2017 declaration extending U.S. recognition of Jerusalem as Israel’s capital and his intention to move the U.S. embassy to Jerusalem, eight unarmed Palestinians, including a double amputee, were killed by Israeli forces during protests at the Gaza border, according to the Israeli human rights organisation B’Tselem; similar killings took place during protests last summer over Israel’s decision to place metal detectors at the gates of the al-Aqsa Mosque compound in occupied East Jerusalem. For the Israeli army – as opposed to the police – confronting unarmed protesters with military weapons rather than riot-control gear is a well-established pattern since the founding of the state seventy years ago.

Who organised the protests?

Participants of all ages and genders responded en masse to a call by the Higher National Commission for the March of Return and Breaking the Siege, an entity formed by an array of national and Islamist factions and organisations from the occupied territories and the diaspora. They seek to expose and confront Israel’s occupation and draw world attention to their plight. Hamas views the protests as a means to confront Israel’s blockade by peaceful means, without starting a new war. Preparations for the march began months ago. All major Palestinian factions agreed to participate and keep the demonstrations unarmed. Hamas instructed its followers and security forces to ensure that no arms were displayed among the protesters and no weapons were fired at Israeli forces.

All major Palestinian factions agreed to participate and keep the demonstrations unarmed.

The organisers established several large tent encampments along the fence. They encouraged male Gaza residents to stay overnight, providing the camps with bathrooms, water, medical posts, prayer areas and Wi-Fi. In some areas, the organisers paved the ground and created soccer fields to encourage younger participants to stay. Hamas and other factions provided free transportation, with buses shuttling congregants from mosques all over Gaza to the borders just after Friday prayers. Hamas and Islamic Jihad asked imams affiliated with their organisations to deliver Friday sermons encouraging worshippers to participate, reminding them of their duties to the Palestinian struggle. Women were called upon to bring their entire families during the day, but leave their sons, husbands and brothers at the tent camps overnight.

Why are these protests happening now?

Protest organisers describe them as reflecting a shift in Palestinian national consciousness, stemming from Trump’s decision to, in his words, take “Jerusalem off the table”. They say that, to Palestinians, it is now indisputable that they cannot achieve their national aims through mediation by the U.S. or the international community. The march is an attempt by Palestinians to take matters into their own hands and shape their fate, as they attempted to do during the first and second intifadas.

On 15 May, the national day of mourning for the flight and expulsion of three quarters of a million Palestinian refugees, Palestinians in Gaza plan to break through the border fence and march toward their erstwhile villages, destroyed since 1948. The protest will take place at a tense moment: the day after Israel will celebrate the 70th anniversary of its declaration of independence and the U.S. will hold a ceremony to open its embassy in Jerusalem.

The march is taking place at a time of unprecedented suffering in Gaza.

The march is taking place at a time of unprecedented suffering in Gaza. Gazans have endured a more than a decade-old closure, with severe restrictions on imports, exports and travel to and from Gaza, which has turned the territory into a virtual prison. Youth unemployment stands at roughly 60 per cent, and overall unemployment is over 40 per cent. In March 2017, conditions worsened considerably, when the Palestine Liberation Organisation (PLO)-controlled Palestinian Authority (PA) in the West Bank began taking a series of punitive measures against Gaza, hoping to press Hamas to fully relinquish control of the territory. The PA cut salaries of its employees in Gaza, most of whom had been paid to stay home since Hamas won the elections and took over Gaza’s administration in 2007. It also prevented Gaza patients from obtaining the insurance needed for medical treatment outside of Gaza, held up the supply of medicine and reduced the electricity supply, causing worsening blackouts, increased flows of untreated sewage and the closure of several hospitals and clinics.

Following several months of such pressure, Hamas and the PLO forged a new reconciliation agreement on 12 October 2017, but little progress has been made in implementing it. Israeli officials now complain openly of the PA seeking to drag Hamas into a new war with Israel as a way of crippling its political rival. Israeli officials interpret the current march as an attempt by Hamas to respond to PA pressure by directing the anger of Gaza residents toward Israel. But Gazans view it as a rare moment of unity following eleven years of conflict and stalemate among their political leaders.

What can be done?

There is a great deal that can and must be done for Gaza, regardless of the marches, not least by providing it with drinkable water, electricity and sewage treatment. The PA should rescind its punitive measures against Gaza. Egypt should open the Rafah crossing regularly. Israel should increase exports and exit permits from Gaza and use Gaza tax revenues to provide Gaza with additional electricity, regardless of any intended cuts by the PA.

While such steps are urgently needed to alleviate a man-made humanitarian crisis, they are almost certainly insufficient to stop the marches that are set to take place from now until 15 May, or to restrain the protesters if they decide to push toward and across the fence. The issues driving the marchers are much larger than the collapsing Gaza infrastructure, and resolving them is not something Israel, the U.S. or the international community appear inclined to tackle in a serious way.

Nevertheless, steps can be taken to reduce the risks of escalation, which will increase substantially if more protesters are killed and Hamas and other factions respond with violence. The protest organisers should do their utmost to keep the marches peaceful and Israel must cease responding to unarmed demonstrations with deadly and disproportionate force. And the EU and the international community should take two simultaneous steps: press Israel not to use disproportionate force, and engage Hamas in order to encourage it to eschew violence and continue to embrace peaceful protest.