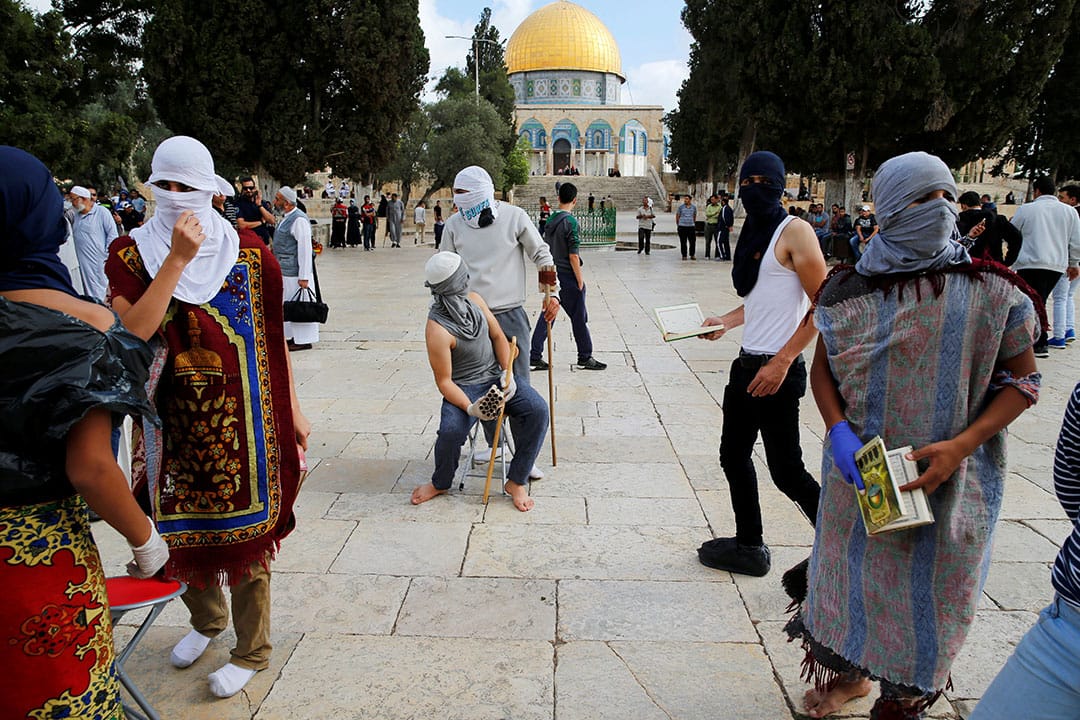 Masked Palestinians gather during clashes with Israeli police during the holy month of Ramadan near The Dome of the Rock in Jerusalem's Old City on 28 June 2016. REUTERS/Ammar
Commentary / Middle East & North Africa 30 June 2016

For the first twenty days of the Muslim holy month of Ramadan, an unusual calm prevailed on Jerusalem’s Holy Esplanade – known to Jews as the Temple Mount and to Muslims as the Noble Sanctuary or the Al-Aqsa Mosque. This was largely a result of Israel and Jordan implementing four commitments agreed eighteen months ago to keep the peace through mutual limits on access.

Yet on 26 June, the beginning of the most sacred and sensitive part of Ramadan, Israel changed an informal, recent additional restriction on access to the site. Violence broke out. It exposed once again the root of the controversy: diverging perceptions between Israelis, Jordanians (whose Waqf charitable foundation administers the Esplanade) and Palestinians over who should be able to visit the site and when.

In the last five years Israel had prevented the entry of Jews and other non-Muslims during precisely the last ten days of Ramadan. This was in order to reduce the risk of escalation when Muslims worshippers often number many tens of thousands. This year, however, Israel’s Internal Security Minister Gilad Erdan allowed non-Muslim entry on the 10th day before the end of Ramadan.

Erdan was not just facing pressures to reverse the ban on access after a quiet start to the month. Israeli decision-makers also saw it as correcting of a temporary and self-imposed constraint. They feared that the de facto ban would become part of the informal status quo. Jordanians and Palestinians, for their part, saw it as a violation of what had become an established norm.

The first group of Jewish Temple activists had barely entered the compound through the Mughrabi Gate at 7:30 AM on Sunday 26 June when clashes began. Shouting by young Palestinians soon turned into fisticuffs, stones and firecrackers. By the end of the day five Palestinians had been wounded; three Muslim British citizens who joined the protests and two Palestinians were arrested. The Palestinian Authority’s Mufti of Jerusalem, Muhammad Hussein, called on all Palestinians to rally at the al-Aqsa Mosque to defend it.

Not wanting to appear weak or to cave into the violence, Israel again permitted non-Muslims to enter the following day, 27 June. The outcome was worse. Israeli police clashed for hours with masked young Palestinians who attacked from within the mosque, ultimately locking them inside to allow non-Muslims to make a shortened, rapid visit of the Esplanade. Live on broadcast and social media, Palestinian Muslims and Israeli Jews saw the holy site turn into a battle zone. Rocks and fire crackers flew in one direction, stun and smoke grenades in the other.

On the morning of Tuesday 28 June, Israeli police backtracked and announced that the site would be closed to non-Muslims until the end of Ramadan. But with the atmosphere so tense, the situation continued to deteriorate. By the end of another day of violent clashes at the Esplanade the Israeli police had arrested seventeen Muslims, including a Waqf official. A few stones reached the Western Wall prayer plaza and injured a 73 year-old Jewish worshipper.

The violence showed how Ramadan complicates not only the established access regime but also the range of responses available to the Israeli and Jordanian authorities. Because the Western Wall plaza, located just below the Esplanade, is Israel’s most significant place of prayer, often occupied by thousands of Jewish worshippers, the Israel Police typically take no chance with stone-throwing: they storm the Esplanade as soon as a risk manifests itself. However, given the dense crowds in the compound during the holy month, it is difficult to identify potential stone-throwers quickly.

The four commitments were reached in 2014 between Israel’s Prime Minister Benjamin Netanyahu and Jordan’s King Abdullah. Netanyahu committed to keep all Knesset members, some of whom had made incendiary statements about Israeli sovereignty and replacing the Dome of the Rock with a Jewish Temple, off the Esplanade; to refrain from categorical age or gender limitations on Muslim access, as the police frequently had imposed as a security measure, that backfired; and to keep provocative activists from the site and limit religious Jewish groups permitted to enter. Abdullah’s single, crucial commitment was to keep the young Palestinians who became the next day’s stone-throwers from surreptitiously entering the compound at night.

Since then, the Jordanian Waqf successfully prevented young Palestinians from spending the night inside the Mosque – purportedly for conducting the night prayer, but then throwing stones in the morning in order to prevent the entry of Jewish groups. But during Ramadan, this is almost impossible for the Waqf, given the deeply rooted religious custom of performing the night prayer during the last ten days of Ramadan.

So long as Temple activists do not enter during the remaining days of Ramadan, the chances are better, though by no means guaranteed, that calm will prevail. Some young Palestinians at the site seem encouraged by the way the violent protest persuaded Israel to back down. They may seek further achievements like forcing the Israeli police to withdraw its presence from the Mughrabi Gate. If this happens, and particularly in the event of injuries, clashes may spill over into the Old City and beyond. Moreover, if the violent attacks over the last nine months are any indication, vivid images of clashes at the al-Aqsa Mosque could lead a West Banker or Arab Palestinian citizen of Israel to perpetrate an attack against Israel civilians.

Any change imposed by Israel that appears to endanger core Palestinian interests at the Esplanade – especially the division of the Esplanade between Jews and Muslims through different visiting hours or segregated areas – will likely encounter a spontaneous violent reaction from non-organised Palestinians. The recent absence of violence was the result of sticking to past access-related commitments and exercising restraint in a manner that alleviated Palestinian threat perceptions while allowing regular access to non-Muslims.

Discipline and restraint, again and again, have proven to be the best way to keep the calm. Israel and Jordan should honour their promises to each other. Above all, Israel should avoid reinstating categorical age-based restrictions on Muslim entry and instead target stone throwers on an individual basis. Jordan and the Palestinian Authority (PA) should criticise violent protestors for turning a holy site into a battle ground.

Doing any of this will be hard. Israeli leaders would have to overcome growing criticism from right-wing politicians regarding their U-turn on the Temple Mount – while they are simultaneously criticised for an unpopular, purportedly overly dovish new reconciliation deal with Turkey. Jordan and the Palestinian Authority would need to overcome the passions of tens of thousands of worshippers collecting at the Mosque during the most portentous days of Ramadan.

To head off conflict and further escalation after Ramadan ends, Israel and Jordan need to find ways to negotiate the modus vivendi based on dialogue, not unilateral deeds. Israeli decision makers should withdraw their initiative to reinstate Esplanade access to Knesset members, both Arab and Jewish, since the latest escalation shows the dramatic risks of such mediatised visits.

Any change to the established norms exposes, usually violently, the tremendous sensitivities and tensions about this sacred site that are always present, even at times of relative calm. It may be helpful for allies of both countries, first and foremost the U.S., to prod the various sides to cooperate and coordinate, entirely avoiding surprise moves, notably in advance of religious holidays.

Israeli and Jordanian officials had hoped a calm Ramadan would allow them to improve management of the site, including by renewing tourist entry to the buildings to those purchasing tickets from the Waqf – a move which would simultaneously decrease tensions by rendering the site more touristic, and strengthen the Waqf and its capacity to handle violent protests. The current crisis only proves how necessary and urgent exploring such improvements has truly become.