This week’s stabbing attack at the Lion’s Gate of Jerusalem’s Old City, in which two Israeli border police officers were injured and their assailant was killed, is an ominous signal of growing strains around the city’s Holy Esplanade (Temple Mount / Haram al-Sharif). Tensions and clashes in and around the Esplanade are common during Muslim and Jewish holidays, at times leading to violence far from the site itself. It is worrying that two months before Passover and the holy month of Ramadan, there are already signs of escalation at the site, after a considerable period of relative calm.

The weeklong Jewish Passover holiday, during which many Temple activists will seek to enter the Esplanade, begins on 10 April; Ramadan commences slightly more than a month afterward, on 26 May. If past is precedent, some Temple activists will attempt to demonstrably defy the ban on non-Muslim prayer, part of the historic status quo that has kept calm at the site, more or less, for over a century.

Moreover, the current six-month waiver of US legislation requiring the relocation of its embassy to Jerusalem will expire on June 1, within days of Ramadan’s start. Even if US President Donald Trump ultimately decides to renew the waiver, as previous presidents have done regularly citing US national security interests, his previous stated support for moving the US embassy from Tel Aviv may well catalyze protests. Moving the US embassy to Jerusalem would be understood by Palestinians, and in Jordan, as support for full Israeli sovereignty over the entire city, including its Arab parts and the al-Aqsa Mosque.

An additional source of tension is the so-called muezzin law, banning the night-time use of loudspeakers from houses of prayer, which has already passed a preliminary Knesset vote. Like the possible US embassy move, it could provoke demonstrations even if it never comes into effect. Jordan has already condemned Israel over this for limiting mosque and church worship in East Jerusalem, and even more strenuously denounced restrictions at the al-Aqsa Mosque and other Waqf-run sites.

The “Jerusalem Intifada” of 2014 and 2015 shows that in such an incendiary atmosphere, in which Muslims sense al-Aqsa’s integrity is threatened, an increase in Palestinian protest, including violent attacks, is likely.  But the mood in 2017 will be much more combustible because the first week of June also marks the 50th anniversary of the start of the Israeli occupation.

Moving the US embassy to Jerusalem would be understood by Palestinians, and in Jordan, as support for full Israeli sovereignty over the entire city, including its Arab parts and the al-Aqsa Mosque.

The past two years of fragile calm at the Esplanade were largely the product of quiet understandings in 2014 and 2015 between Jordan’s King Abdullah and Israel’s Prime Minister Benjamin Netanyahu. The understandings comprise four commitments, three by Netanyahu, one by Abdullah. Netanyahu committed to prevent entry to the Esplanade by all Knesset members, including those who have made inflammatory statements about extending Israeli sovereignty over the site and the replacing of the Dome of the Rock with a Jewish Temple; to refrain from imposing, as a security measure, categorical age or gender limitations on Muslim access, which in the past often had backfired; and to keep provocative activists from the site and to limit the size of religious Jewish groups permitted to enter, reinforcing the notion that the status quo provides for non-Muslim access only for touristic purposes not religious ones. Abdullah’s single, crucial commitment was to prevent young Palestinians, who might become the next day’s stone-throwers, from entering the compound at night, ostensibly for night-time prayer (itikafh).

There are initial indications that the valuable pact may unravel. Palestinian and Jordanian leaders have renewed their claims that Israel is “harming the al-Aqsa Mosque”. This stems primarily from one key shortcoming of the understandings themselves: they did not bridge the divergence between Israel and Jordan over whether the Esplanade’s immediate environs are part of the site, as Jordan argues, and whether Israeli archeological excavations held there without coordination with Jordan violate the status quo.

On 1 February, the Knesset Ethics Committee decided, on the basis of the police recommendations and due to pressures from both Jewish right-wing and Arab Knesset members, that Israeli ministers and Knesset members will again be permitted to visit the site as long as they observe the criteria set by the Israeli police (particularly advance coordination of visits and not bringing cameras). Prime Minister Netanyahu quickly reaffirmed the ban publicly in an attempt to smother potentially inflammatory Palestinian media reports that suggested Knesset members were already on their way to the Esplanade. Still, it is likely that before Passover, religious Jewish Knesset members will use the Ethics Committee decision to justify a public push to end the ban.

Moreover, a series of unrelated events late last month led Palestinian and Jordanian ministers to protest that Israel was attacking the holy site. On 26 February, the Palestinian Authority Minister of Waqf and Religious Affairs warned of “Israeli attempts to destroy Al-Aqsa Mosque”. His statement was a reaction to a claim by the Islamic-Christian Committee to Defend Jerusalem and Holy Sites stating that sinkholes in the neighborhood of Silwan, a few hundred meters south of the mosque, had resulted from officially sanctioned excavations conducted by a pro-settler organization.

Tensions caused by the entry of controversial figures [to the Holy Esplanade] will grow – in part because Jordan and Israel themselves do not agree as to whether the historic status quo allows for non-Muslim entry [during Ramadan.]

Coincidentally, this was the same day that the Israeli Magistrate Court in Jerusalem reiterated its position that Israel’s [Jewish] Holy Places Law applies to the Esplanade, as part of its conviction of a Palestinian woman who attacked a Knesset member when she visited the upper plateau of the Esplanade, near the Dome of Rock, in November 2014. Jordan’s spokesperson and the PA cabinet characterised the case as providing for Jewish worship rights at the al-Aqsa Mosque. In fact, there was nothing new in the judgment: the court has held since the 1980s that Jews have the right to pray at the site, but that the police can temporarily abrogate that right when necessary to preserve public order; the resulting “temporary” ban on Jewish prayer has now been in effect for over three decades. To claim in this tense environment there was anything novel in the court’s ruling was imprecise and dangerous, though Jordan of course would like to see the original decision granting Jews the right to pray at the site overturned.

A few days later, on March 1, Jordan protested the completion of an Israel Antiquities Authority project immediately south of Al-Aqsa Mosque, where the ancient Umayyad Palaces are buried below the plateau. The construction of wooden and concrete walkways included the installation of a sign with the following text: “purity pools used by Jewish pilgrims in the Second Temple period.” The path ends at Hulda’s Gates, the entry to the compound that Jews used in ancient times. Jordan sent a letter of protest to Israel’s ambassador in Amman, arguing that the works ignore the Waqf’s authority over the site, change the historical status quo and denigrate its Muslim character.

Pressures are likely to build in the run-up to the month of Ramadan, which begins on 26 May. Internal Security Minister Gilad Erdan already has declared that he will likely continue with his policy of allowing regular visits to the site, including by Temple activists, subject to the limitations imposed on them by the understandings with Jordan. However, toward the end of Ramadan, especially during the month’s last ten days, the tensions caused by the entry of controversial figures will grow – in part because Jordan and Israel themselves do not agree as to whether the historic status quo allows for non-Muslim entry during this particularly holy period. Moreover, the period’s special sanctity makes it virtually impossible for Jordan to prevent youth from staying for the night prayer, all but guaranteeing their presence in the morning during the visits of Jews.

With all the threats clearly foreseeable, urgent steps are needed to maintain the fragile calm in and around the Esplanade. Jordan and Israel should start working out the terms of non-Muslim access to the site for Ramadan, in particular during the final ten days of the holy period. It is high time for Jordan and Israel to seriously consider allowing a visit by independent archeologists to the site and its immediate environs in order to ease Israeli fears about illicit Waqf works at the site, and to allay Muslim fears about Israeli excavations below and around it. The U.S. should not relocate its embassy to Jerusalem absent a broader agreement – and should not even discuss the possibility, except to discount it, in the run-up to the religious holidays.

Otherwise, by the time Ramadan arrives, it may well be too late to reverse this dangerous course.

How to Preserve the Fragile Calm at Jerusalem’s Holy Esplanade 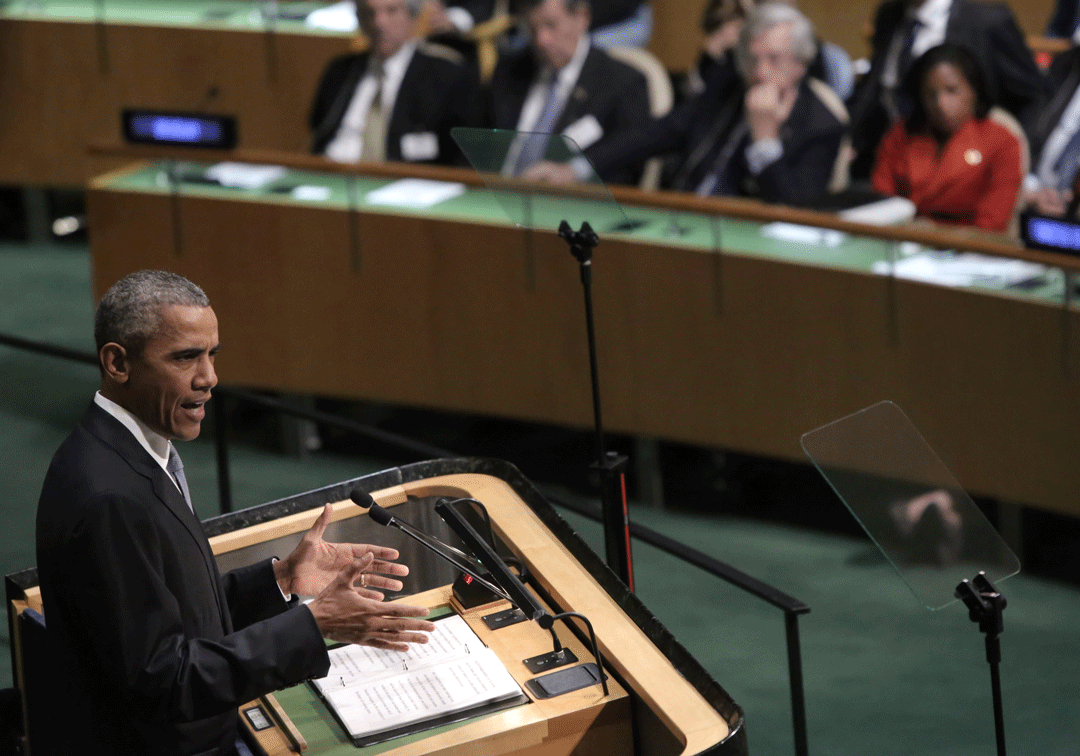 The collapse of U.S.-led Israeli-Palestinian talks in 2014 led to political instability, rising violence and settlement expansion. To improve his successors’ peace-making chances, President Obama should push for a new UN Security Council resolution setting out the basic parameters of a deal.