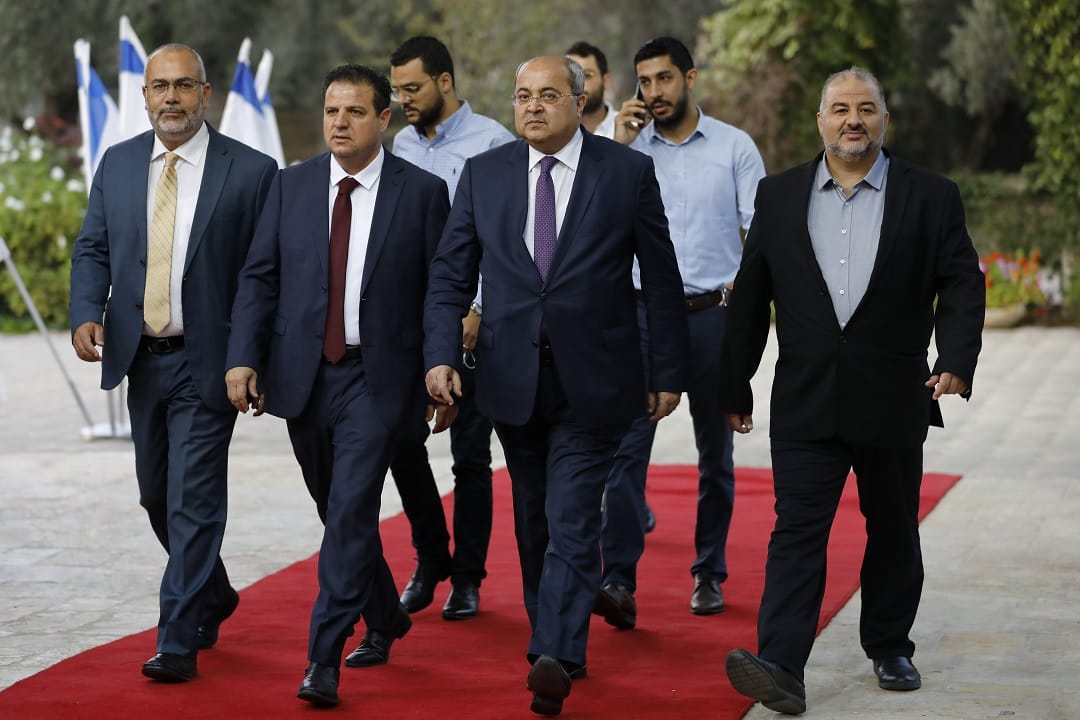 Members of the Joint List Osama Saadi, Ayman Odeh, Ahmad Tibi and Mansour Abbas arrive for a consulting meeting with the Israeli President, to decide who to task with trying to form a new government, in Jerusalem on September 22, 2019. AFP/Menahem Kahana
Commentary / Middle East & North Africa 26 September 2019

Why Arab Parties’ New Political Engagement Is Historic for Israel

Whatever the outcome of Israel’s post-election government negotiations, there is a historic surprise in the way most of Israel’s Arab-Palestinian majority parties, united under the Joint List, backed Blue and White’s Benny Gantz. Crisis Group Senior Analyst Ofer Zalzberg discusses the repercussions for Israel’s political landscape.

As Israel’s politicians negotiate what government can take power after the 17 September elections, it is worth noting a historic step taken by ten out of thirteen members of the country’s Joint List of small Arab-Palestinian majority parties. Their recommendation of Blue and White’s chairperson Benny Gantz for prime minister is the first by an Arab-majority party or list for a Zionist party since 1992. That Blue and White is headed by three former Israel Defense Forces (IDF) generals, one of whom campaigned on his heavy-handed treatment of Gaza, makes this doubly ground-breaking.

What explains this reversal? For one, the Joint List’s recent decision to move by majority rather than consensus vote allows it to better reflect the views of Israel’s Palestinian citizens. According to a Guttman Center Poll, 76 per cent of Joint List voters would go as far as to support joining a governing coalition (the taboo is greater on the Jewish side, but appears to be eroding: today 50 per cent of Jews object to including Arab parties in a governing coalition, compared to 66 per cent in 2017). Moreover, Israel’s Palestinian politicians feel pressure from their constituents to better address their needs, which they have largely failed to do operating outside Israeli state institutions.

This change has limits. Balad, the most committed to Palestinian nationalism of the four parties that make up the Joint List, opposed recommending Gantz to form the next government. It did so not least due to its scepticism that – regardless of Palestinian engagement – a state that recently passed the discriminatory Nation-State Law would not take meaningful steps toward Arab-Jewish equality. Balad allowed the Joint List to take the decision only on procedural grounds – by yielding to the majority – but ensured that its three Knesset members were not counted among those recommending Gantz lead the government. All Joint List members, moreover, rule out joining the next government.

Arab and Muslim actors are rethinking their strategy toward Israel, articulating how principled engagement with Israel might better serve Muslim and Palestinian interests than refusing contacts altogether.

The Joint List grew in strength, rising from ten seats (when the four parties ran on two separate lists in April) to thirteen seats on a unified list in this election. In April, Arab voters were disappointed that the four parties had failed to agree on a unified list and punished them by turning out in historically low numbers. This time, Arab-majority parties formed a united list, and turnout significantly increased. Palestinian-Israelis turned out in higher numbers for another reason, too: their incessant targeting by Netanyahu during the recent election campaign. The head of the Joint List explained the decision to recommend Gantz as “the most significant step toward helping create the majority needed to prevent another term for Mr. Netanyahu”.

The Joint List took its decision as Arab and Muslim actors are rethinking their strategy toward Israel, articulating how principled engagement with Israel might better serve Muslim and Palestinian interests than refusing contacts altogether. Sheikh Ahmad al-Raysuni, Sheikh Yusuf al-Qaradawi’s successor as president of the International Union of Muslim Scholars, recently stated that he does not support an empty-seat policy and that Muslims can decide for themselves whether to vote in Israeli elections. Whereas Qaradawi prohibited participation on the grounds that it would legitimise Israel, Raysuni pointed out that voting could be “a card to pressure the occupation”. Likewise, Raysuni recently ruled against Qaradawi’s prohibition of pilgrimage to the Al-Aqsa Mosque while it is under Israeli occupation, claiming a Muslim presence at the holy site could defend Islamic interests against Israel more effectively than boycott and avoidance. Raysuni does not believe such pilgrimages constitute normalisation, though he has issued explicit rulings against normalisation by Arab states with Israel.

The Joint List’s recommendation could signal an era in Israeli politics in which party leaders who seek to form governments must at least reconsider their refusal to cooperate with Israel’s Arab parties.

Within Israel as well, an Islamic movement is advocating engagement. The quick, unanimous support for nominating Gantz by the United Arab List, which represents the southern branch of Israel’s Islamic movement, suggests the group is willing to consider new forms of political action within state institutions. Southern branch leaders write publicly that Raysuni’s position encouraged them in this direction. The main milestone in the party’s acceptance of Israel came in 1996, when it decided to participate in Israeli elections. Its recently published charter, which frames Israeli citizenship as a necessary tool for securing the national, civic and religious rights of an indigenous society living in its homeland, reflects their deepening acceptance of Israeli institutions.

The Joint List almost certainly will not play a decisive role in coalition formation this time. Still, its recommendation for Gantz underscores that it could reshape Israel’s future political landscape. An early sign of this came after the April election when Netanyahu, despite his repeated incitement against Israel’s Palestinian politicians, reportedly negotiated with the United Arab List during the last days of coalition formation, seeking its endorsement for a 60-seat right-wing coalition. Netanyahu hoped offering a package of socio-economic measures would be enough to bring them on board. But it soon became clear their demands included officially recognising villages in the Negev, curbing criminal and clan violence among Israel’s Palestinian minority, abrogating the Nation-State Law and upgrading the status of the Arabic language. The Joint List’s recommendation could signal an era in Israeli politics in which party leaders who seek to form governments must at least reconsider their refusal to cooperate with Israel’s Arab parties.

After the Aramco Attack: A Middle East One Step Closer to Its “1914 Moment”