Spider Web: The Making and Unmaking of Iran Sanctions

For some, a tool to rein in Iran’s nuclear ambitions, for Tehran an illegitimate intrusion into domestic affairs: what is clear is that sanctions have, as yet, failed in diminishing dangerous tensions on the core question of whether Iran’s nuclear goals are military or merely civilian.

With war a frightening prospect and fruitful negotiations a still-distant dream, sanctions have become the West’s instrument of choice vis-à-vis Iran. They are everywhere: in the financial arena, barring habitual commercial relations; in the oil sector, choking off Tehran’s principal source of currency; in the insurance sector, thwarting its ability to transport goods. Without doubt, they are crippling Iran’s economy. But are they succeeding? By at least one important criterion (the intensity of Western concern over nuclear progress), plainly they are not. Add to this myriad unintended consequences (bolstering the regime’s ability to allocate goods; harming ordinary citizens; pushing leaders persuaded the goal is regime change to escalate its own retaliatory steps; and constructing a web of punitive measures harder to unknot than to weave). Sanctions are not necessarily counterproductive. But, too easily they become a path of least resistance, a tool whose effectiveness is assessed by the harm inflicted, not how much closer it brings the goal. In future cases, policymakers should make sure to constantly re-evaluate their effects. For now, the priority is devising a menu of meaningful, realistic sanctions relief to match meaningful, realistic nuclear concessions

Not the product of a single policy, the sanctions regime has mutated over three decades, been imposed by a variety of actors and aimed at a wide range of objectives. The end result is an impressive set of unilateral and multilateral punitive steps targeting virtually every important sector of Iran’s economy, in principle tethered to multiple policy objectives (non-proliferation; anti-terrorism; human rights) yet, in the main, aimed at confronting the Islamic Republic with a straightforward choice: either comply with international demands on the nuclear file, or suffer the harsh economic consequences.

The story of how the international community reached this point is a study in the limitations and frustrations (some unavoidable, many self-inflicted) it has faced in seeking to influence Iranian policy. It is a study in the irresistible appeal of sanctions, backed both by hardliners who wish to cripple the regime and by more moderate actors who view them as the alternative to a military strike. And it is a study in how, over time, means tend to morph into ends: in the absence of any visible shift in Tehran’s political calculus, it is difficult to measure their impact through any metric other than the quantity and severity of the sanctions themselves. That they have yet to significantly curb Tehran’s nuclear drive becomes, in this context, more or less an afterthought.

A key problem is that the West and Iran view the sanctions through highly dissimilar prisms. European and U.S. officials bank on a cost-benefit analysis pursuant to which the Islamic Republic, at some point, will conclude that persevering on the nuclear track will prompt economic hardships sufficiently great to trigger more extensive popular unrest, ultimately threatening regime survival itself. But the world looks very different from Tehran. There, the one thing considered more perilous than suffering from sanctions is surrendering to them; persuaded the West is intent on toppling the regime, the leadership views economic steps as just one in a panoply of measures designed to destabilise it. Its strategy, rooted in the experience of diplomatic isolation and the war with Iraq, can be summed up in two words: resist and survive, the former being the prerequisite to the latter.

So there are good reasons for thinking that, rather than adjusting its nuclear policy to remove the sanctions, the regime will continue to adjust its economic policy in order to adapt to them. Likewise, whatever lobbying has occurred from key domestic constituencies principally has been aimed at convincing the regime to amend its economic as opposed to its nuclear approach. Tellingly, and while important regime constituencies have been harmed by international penalties, not all of them have been harmed equally and not all of them have been harmed at all. Governmental and quasi-governmental institutions still dominate the economy, and evidence suggests that groups with superior contacts with the state have been in a position to weather the storm, circumvent sanctions, exploit new opportunities and thus minimise any damage to their interests. The net effect is to mould the nation’s political economy in ways that run directly counter to the sanctioning nations’ stated intent.

There are other unintended implications. The more comprehensive the sanctions, the likelier they will harm average citizens. For all the West’s efforts to exempt humanitarian goods, reports of widespread shortages, notably of specialised medicine, abound. This can be attributed partly to regime inefficiency, but only partly. For sanctions, notably as comprehensive and far-reaching as those presently in effect, inevitably have both a snowballing and chilling effect. Iranians lack foreign currency. Foreign businesses, fearing they might unknowingly cross an impermissible line, prefer to shy away even from authorised deals. Transaction costs have escalated. In turn, this means that the target of public wrath is now more evenly divided between a regime viewed as incompetent and an outside world seen as uncaring.

Ultimately, sanctions as a tool of coercive diplomacy are only as effective as the prospect of relieving them in exchange for policy shifts is real; the measure of efficacy lies in what can be obtained when they are removed, not what happens when they are imposed. Therein lies another problem. For in the Iranian case, the situation at best is murky in this regard. Although long reluctant to acknowledge the impact of sanctions or project any eagerness to see them lifted, Iranian officials increasingly identify such a step as a condition for any accord. Yet that is far easier said than done. Sanctions have become so extensive and so intricately woven that it will be hard to offer significant, concrete relief short of a major – and improbable – turnaround in major aspects of the Islamic Republic’s domestic and foreign policies; reaching the threshold for removing U.S. sanctions in particular is hard to imagine. That leaves the option of a time-limited suspension or waiver, which in turn is likely to prompt at best time-limited and reversible Iranian reciprocal steps.

Too, the impact of sanctions in many cases has acquired a life of its own, one that will outlast the measures themselves. This is because important trading and consumption patterns already have changed. Companies and countries that have shifted away from Iran – often at considerable expense – are unlikely to rush back, at least short of solid assurances that any decision to remove the penalties will be lasting rather than temporary.

Finally, there is another, considerable risk: that by placing all one’s eggs in the sanctions basket, failure may appear to leave no other option but war.

None of this is meant to indict sanctions as a policy tool. Even in the Iranian case, it is plausible that, in their absence, Tehran might have advanced further along the nuclear path. And they remain an option preferable to military confrontation. But, at a minimum, it argues for exhibiting greater prudence and judiciousness in imposing them; resisting the impulse to pile on more sanctions when those already in place do not succeed; constantly assessing and reassessing their social and economic consequences; and preserving sufficient nimbleness so that they can be used – including through their removal – to advance negotiations in a diplomatic process where a scalpel, not a chainsaw, is required.

As far as Iran is concerned, it is too late to reverse course. The massive sanctions regime is in place, warts and all, and not about to be removed. The challenge for the P5+1 (the five permanent members of the Security Council plus Germany) is to devise a package of incentives, including some less than complete degree of relief, that is politically as well as legally achievable and that genuinely addresses Iranian concerns. And the challenge for Tehran will be to respond in kind. This week’s meeting at Almaty offers the two sides an opportunity to start down that path. 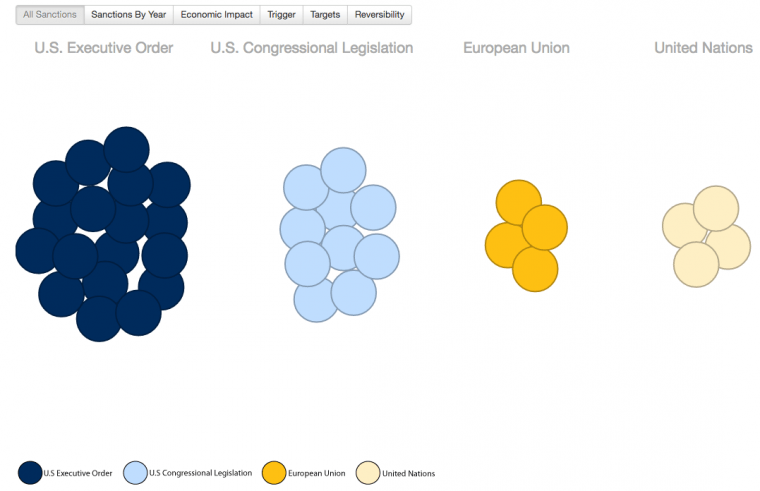 This interactive highlights the major unilateral, multilateral and international sanctions imposed on Iran and breaks them down by year, economic impact, trigger, targets and reversibility.