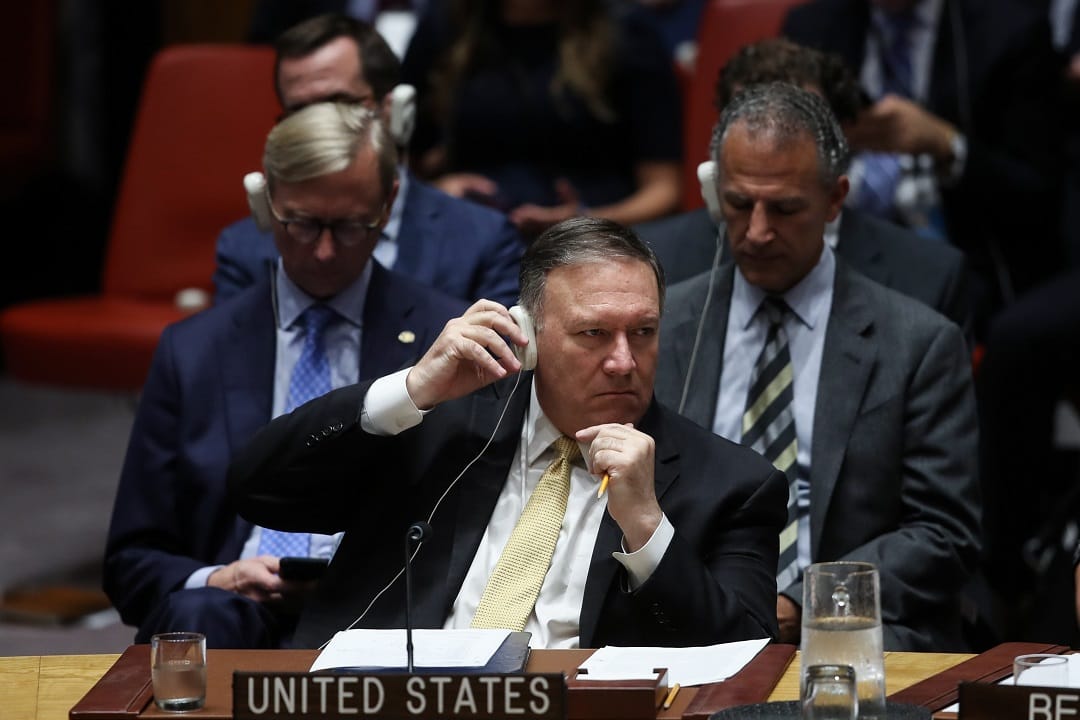 19 August: Iran indicates it has warned U.S. via intermediaries against detaining Grace 1.

19 August: Prime Minister Netanyahu warns that “Iran has no immunity, anywhere… we will act – and currently are acting – against them, wherever it is necessary”.

20 August: Explosions at Iraqi paramilitary base north of Baghdad, the third such incident in the past month.

20 August: U.S. Secretary of State Pompeo tells UN Security Council that Iran “has gone all in on a campaign of extortion diplomacy”.

20 August: Huthis claim downing of U.S. drone over Yemen; U.S. National Security Council spokesperson says “this attack is only possible because of Iran’s lethal aid to the Huthis”.

21 August: An Iraqi enquiry into the 12 August explosion of a munitions warehouse assesses it was caused by a drone strike; paramilitary units issue statement asserting that “the U.S. is ultimately responsible”.

21 August: President Rouhani warns that “if Iran’s oil export is reduced to zero, international waterways will not have the same security they used to”.

An Iranian tanker detained in Gibraltar on 4 July set sail on 18 August.

Why it matters: In a 15 August statement, the Gibraltar government announced that Iran had provided “written assurance” that the Grace 1’s $140m crude oil cargo was not headed for Syria in contravention of EU sanctions, and that the ship was free to go. Case closed? Not quite. The U.S. on 15 August warned that it could deny visas to sailors linked to the Grace 1 and other vessels it connected to the Islamic Revolutionary Guard Corps (IRGC), and the following day issued a warrant for the ship’s seizure; it has since warned against possible offers of harbour to the now-renamed Adrian Darya 1. Meanwhile, the CEO of Stena Bulk, whose UK-flagged vessel Stena Impero was seized by Iran on 19 July under alleged “maritime violations” currently under consideration by an Iranian court, met with Foreign Minister Zarif in Sweden on 20 August to press for its release.

Foreign Minister Zarif on 21 August indicated that “even if the U.S. does not come back to the JCPOA and Europe simply implements its part of the bargain, then we will immediately – not within even days, within hours – reverse to the original state [of JCPOA compliance]”.

Why it matters: Iran in July breached the 2015 nuclear deal’s limits on enriched uranium stockpile size and enrichment rates, while warning of a “third step” in September if Europe cannot deliver the economic dividends Tehran expects for its compliance. Recently released EU-Iran trade data gives a sense of the impact of the re-imposition of U.S. sanctions: over the first half of 2019, Iran’s European exports amounted to €418m, down more than 93 per cent year-on-year, while imports more than halved. Getting the French/German/British special purpose vehicle (INSTEX) through its fitful start, including via the injection of export credits, may not completely mitigate these reversals, but – in light of Foreign Minister Zarif’s statement – even a partial redress could help the JCPOA from unravelling further.

French President Emmanuel Macron on 21 August indicated that “before the G-7 I will have meetings with the Iranians and propose ideas”, adding that “we have made proposals either for a softening of sanctions or a compensation mechanism to enable the Iranian people to live better”.

Why it matters: In the burst of “active diplomacy” that Iran’s top diplomat has been undertaking (Finland, Sweden and Norway this week, France on Friday and trips to Japan and China later this month), the meeting with President Macron just before he hosts President Trump in Biarritz for the G-7 stands out as a key opportunity for de-escalating tensions between Iran and the U.S. As Crisis Group recently argued, one path worth exploring is for Washington to partially reinstate sanctions waivers on Iranian crude sales and Tehran to resume full JCPOA compliance and refrain from provocations in the Gulf – a tactical détente that Macron may be in a prime position to mediate. Progress toward the release of dual nationals held by Iran on dubious charges would also be welcome.

30 August: Next quarterly report of the International Atomic Energy Agency (IAEA) on the JCPOA’s implementation. 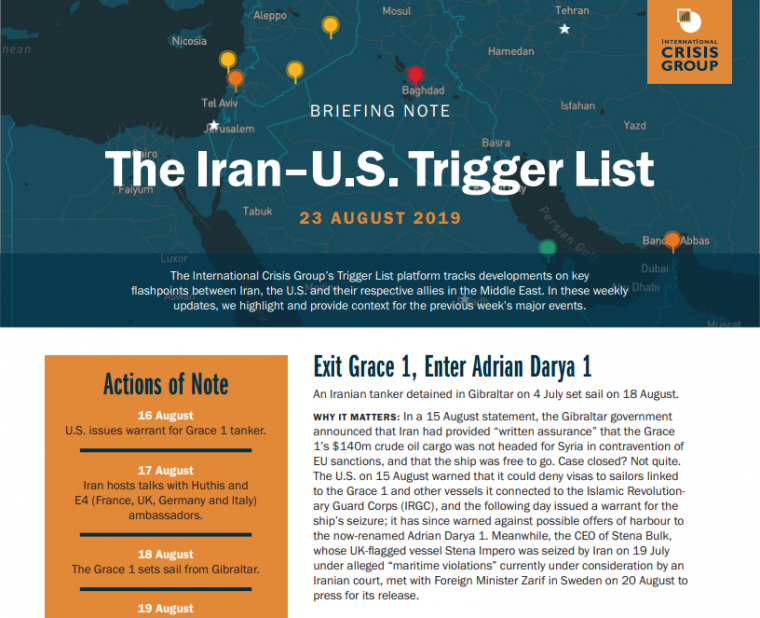