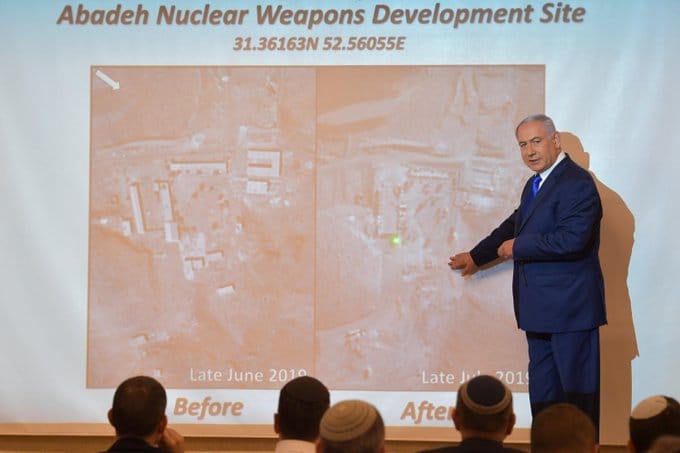 8 September: Secretary of State Mike Pompeo estimates that Iran’s “GDP will shrink by as much as 12 or 14 per cent this year”.

9 September: Hizbollah claims to down and retrieve Israeli drone.

9 September: Israeli military says “a number of rockets were fired from Syria toward Israel… all failing to hit Israeli territory”.

Prime Minister Benjamin Netanyahu on 9 September claimed to expose a “nuclear weapons development site” near Abadeh and called for “pressure, pressure and more pressure” against Iran.

Why it matters: Netanyahu’s disclosure, based on Iranian archives exfiltrated by Israeli intelligence last year, left some key details unaddressed: namely, what sorts of experiments Iran had conducted and when. But it underscored the recent prioritisation of Iran’s nuclear activities as the most pressing issue for Israel’s military and intelligence services. The timing of the announcement, just days before Israelis head to the polls on 17 September, led Netanyahu’s political rivals to cry foul; his office insisted the disclosure was appropriate given parallel developments in Vienna (see below). Expect Netanyahu to throw more surprises, particularly if, as Israeli officials have reportedly concluded, the prospects for some kind of U.S.-Iran diplomatic breakthrough increase.

Once More into the Breach

A spokesperson for the Atomic Energy Organization of Iran (AEOI) on 7 September confirmed that “we have started lifting limitations on our research and development imposed by the [nuclear] deal”, including the activation of advanced centrifuges.

Why it matters: Iran’s third step in reducing its compliance with the JCPOA furthers its staggered breaches to add urgency without emergency vis-à-vis European efforts aimed at countering the economic toll of U.S. sanctions; a 60-day clock is already running toward the next rollback. French Foreign Minister Jean-Yves Le Drian on 8 September asserted that “the channels for dialogue are still open… [but] Iran must give up such actions”. Meanwhile, the IAEA’s Acting Director General, Cornel Feruta, on 9 September told the IAEA Board of Governors that in Tehran the previous day he “stressed the need for Iran to respond promptly to Agency questions related to the completeness of Iran’s safeguards declarations”. “Time”, he added, “is of the essence”.

Iran’s diplomatic spokesperson on 8 September announced that the Adrian Darya 1, which was released from detention by Gibraltar last month after Tehran provided “written assurance” that the crude oil cargo would not go to a recipient blacklisted under EU sanctions, had “unloaded its cargo” at an unnamed Mediterranean destination.

Why it matters: Following a commando operation, a seizure, a U.S. warrant, a release, a renaming, a sanctions designation, a failed financial inducement and a sighting off the Syrian coast, the 2.1m barrels aboard the Iranian tanker have apparently found a home. But while Tehran trumpeted the sale “despite all the malicious attempts” to block it, there will almost certainly be consequences: the UK – one of Iran’s three European JCPOA interlocutors – on 10 September protested that “Iran has shown complete disregard for its own assurances” and plans to pursue the matter at the UN. The setback is also unlikely to deter continued U.S. efforts to disrupt Iran’s evasion of its unilateral sanctions, leaving the hatch open to future rounds of intrigue on the high seas.

President Donald Trump on 10 September announced that he had “informed John Bolton last night that his services are no longer needed at the White House”, adding that “I disagreed strongly with many of his suggestions”.

Why it matters: In the hours before President Trump announced his sacking, National Security Advisor John Bolton fired off two tweets. The first contended that “two weeks from the UN General Assembly, you can be sure Iran is working overtime on deception”, while the second declared that “we stand strong against regimes that sponsor terror”. As the White House debates whether and how to respond to French proposals to de-escalate tensions ahead of the General Assembly, the departure of perhaps the most hardline voice on Iran inside the administration could move the needle toward U.S. acceptance of limited sanctions relief, which Trump has been considering and which Bolton opposed, in return for Iran returning to compliance with the nuclear accord and agreeing to enter into negotiations over a broader deal. Some reduction in sanctions was one of Iran’s prerequisites for a meeting between Trump and President Rouhani on the margins of the General Assembly. A package deal would still need to be agreed, and Tehran appears very leery of such an encounter. But Bolton’s departure could mean more flexibility on the U.S. part, and greater confidence on Iran’s.

16 September: President Rouhani in Ankara for Syria summit with Presidents Erdoğan and Putin.