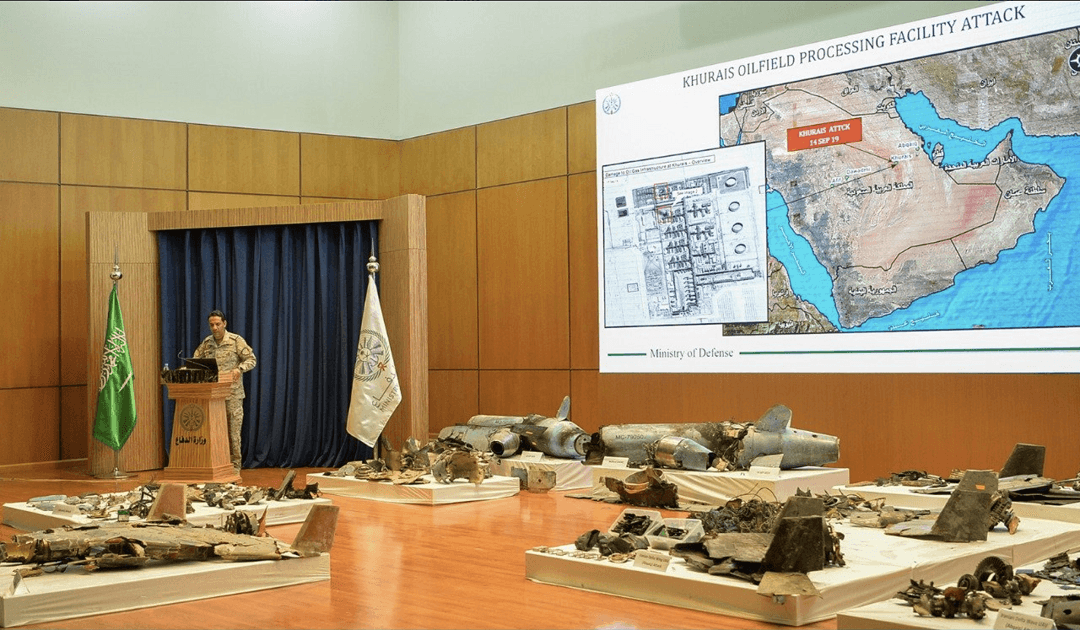 16 September: Iran sends U.S. letter through the Swiss disavowing any role in Aramco attack and warning of reprisal for “any moves”.

17 September: Supreme Leader Ali Khamenei asserts that if U.S. rejoins the nuclear deal, Washington can attend P5+1 talks on the JCPOA; otherwise, there will be no negotiation at any level.

17 September: Huthis warn Saudi Arabia that “our long hand can reach wherever we want”.

18 September: Saudi-led coalition assesses that the Aramco attack “originated from the north and undoubtedly was supported by Iran”.

18 September: In Jeddah, Secretary Pompeo declares Aramco strike “was an Iranian attack”, adds “we are working to build out a coalition to develop a plan to deter them”.

A twin attack on Saudi Arabia’s Aramco oil company shook the region and once again brought the spectre of a regional war to the fore.

Why it matters: Iran has rejected U.S. claims that it carried out the 14 September strikes against Saudi energy facilities from its soil, with President Hassan Rouhani on 16 September contending that “the Yemeni people have to respond to … many acts of aggression” from the Saudi-led, U.S.-backed coalition. But if Iran’s responsibility is conclusively determined, and especially if, as U.S. officials are suggesting, the operation was launched from Iranian territory, it would constitute a substantial escalation against a regional rival and major departure from Tehran’s standard practice of using local allies to keep a degree of plausible deniability. President Trump on 15 September warned that the U.S. was “locked and loaded” to respond, but subsequently also noted that “I’m not looking to get into [a] new conflict”. Trump has also called on the U.S. Treasury Department to “substantially increase” sanctions on Iran; it remains to be seen whether this is a complement to, or in lieu of, a military response. Meanwhile, Saudi Arabia has invited UN experts to analyse debris from the attack, and on 18 September assessed that while the operation was “unquestionably sponsored by Iran”, its precise origin was still to be determined. As Crisis Group has previously argued, the current cycle of U.S. “maximum pressure” and Iranian retaliation on the regional and nuclear fronts is a recipe for growing volatility and a disastrous regional conflagration. Retaliatory strikes by the U.S. would likely prompt a wider response from Iran, as it has threatened. De-escalating tensions along the lines proposed by France remains the best path forward, even as the stakes grow higher and the odds longer.

The Iranian judiciary on 17 September affirmed that three Australian citizens “have been detained in two cases and indictments have been issued for both”.

Why it matters: On 12 September, the Australian government confirmed that “three Australians are being held in prison in Iran”; media reports identified them as Kylie Moore-Gilbert, Jolie King and Mark Firkin. Moore-Gilbert, a Melbourne University lecturer, has been indicted on espionage charges while King and Firkin are alleged to have photographed “military and banned zones”. The trio are the latest cases of foreign and dual nationals whom Iran has disclosed to have detained, including citizens of the U.S., UK and France. Iranian diplomats typically contend that these cases come under the purview of the judiciary, but, as in the case of Foreign Minister Javad Zarif’s April 2019 offer of a U.S.-Iran prisoner swap, acknowledge that the rule of Iranian law may be amenable to diplomatic exigencies. Any steps by Tehran to release foreign and dual nationals would help de-escalate tensions between Iran and Western states.