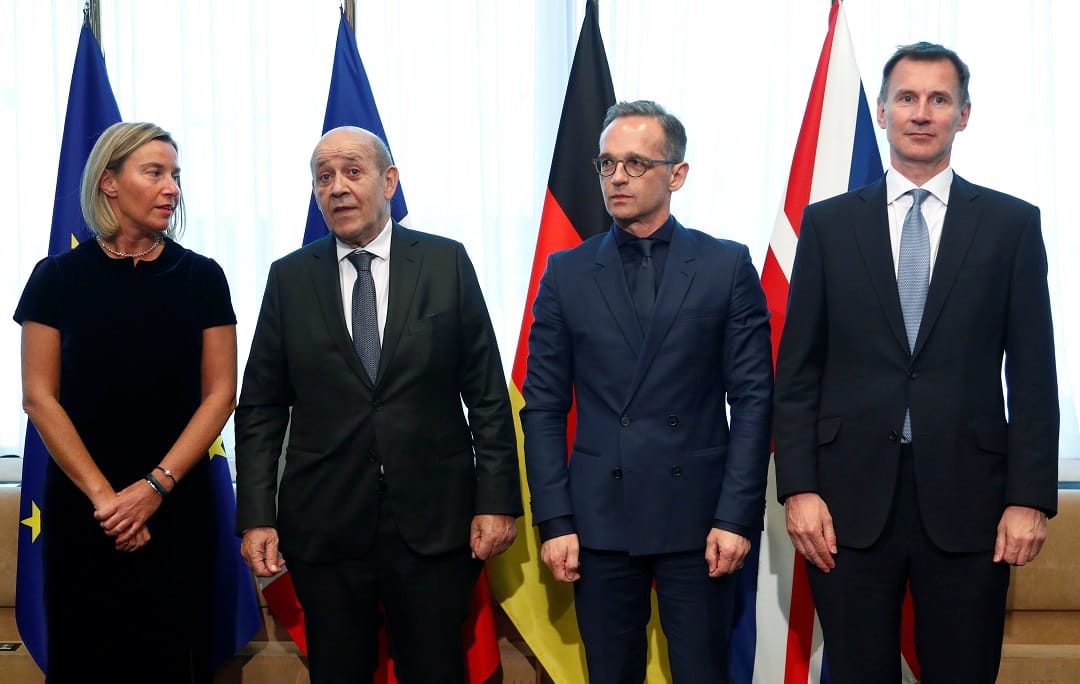 10 July: Three Iranian ships purportedly attempt to impede a British tanker in the Strait of Hormuz; Iran denies the incident.

13 July: An oil tanker sailing through the Strait of Hormuz shuts off its transponder; Iran claims it assisted after a distress call.

15 July: The EU’s foreign policy chief indicates that Iran’s breaches of the JCPOA do not constitute “significant non-compliance”.

16 July: President Trump says “a lot of progress has been made [on Iran]” and denies U.S. aim is regime change.

The UK-Iran quarrel over the detention of the Iranian tanker “Grace 1” nearly took a turn for the worse when Iranian boats on 10 July allegedly tried to block a BP-owned tanker in the Strait of Hormuz before being warned off by a Royal Navy escort.

Why it matters: The incident occurred as Iran was warning the UK of “consequences” over the detention of an Iranian tanker off Gibraltar suspected of skirting EU sanctions on Syria. UK Foreign Minister Jeremy Hunt has been in touch with his Iranian counterpart and indicated that the Grace 1 could be freed if Iran guarantees that the vessel is not bound for Syria. Supreme Leader Ali Khamenei on 16 July warned that Iran “and devout agents of the system will respond to these vicious acts” by the UK, while British and Gibraltarian officials convened to discuss the situation the following day. Tensions in and around the Gulf have been on the rise following attacks against commercial shipping off the UAE coast in May and in the Gulf of Oman in June, and the U.S. is looking for partners in a maritime coalition that would patrol the Strait of Hormuz as well as the Bab al-Mandeb chokepoint in the Red Sea – a military answer to rising tensions that would be better addressed by a diplomatic de-escalation with Tehran.

The EU’s foreign policy chief Federica Mogherini on 15 July asserted that the remaining JCPOA signatories would not “for the time being” respond to Iran’s breaches of uranium stockpile and enrichment rate limits by engaging the JCPOA’s dispute resolution mechanism.

Why it matters: The 15 July meeting of senior European diplomats, which came one day after a joint E3 statement calling on Iran to return to compliance, underscored a commitment to salvaging the JCPOA and pressing on with steps to deliver Iran economic dividends under the deal. Notably, Mogherini suggested Iran oil sales might still factor into the INSTEX trade mechanism. Meanwhile, Israeli media on 10 July reported that the International Atomic Energy Agency (IAEA) had found “traces of radioactive material” at a site in Tehran, which Israeli Prime Minister Benjamin Netanyahu last year alleged was used “for storing massive amounts of equipment and materiel from Iran’s secret nuclear weapons program”. However, until the IAEA provides additional details, it’s unclear whether the traces are smoking gun evidence of major infractions of Iran’s safeguards commitments.

Representatives of the Yemeni government and the Huthis convened on 14-15 July for discussions on implementing a December 2018 agreement over the port city of Hodeida.

Why it matters: The UN-brokered, U.S.-backed Stockholm Agreement called for a demilitarisation of the Red Sea city and its ports. But differing interpretations over what that entails led to halting implementation and dimmed hopes for kicking off broader peace talks. At the same time, the Huthis and Saudi Arabia have intensified their respective cross-border attacks. As Crisis Group argues in a new report, moving forward on Hodeida is a step in the right direction, but it should be pursued in parallel with a dialogue between the Huthis and Saudi Arabia aimed at freezing cross-border attacks, which risk a further regional escalation in a context of rising U.S.-Iran tensions.

6 September: Deadline Iran has given for further rolling back its JCPOA commitments 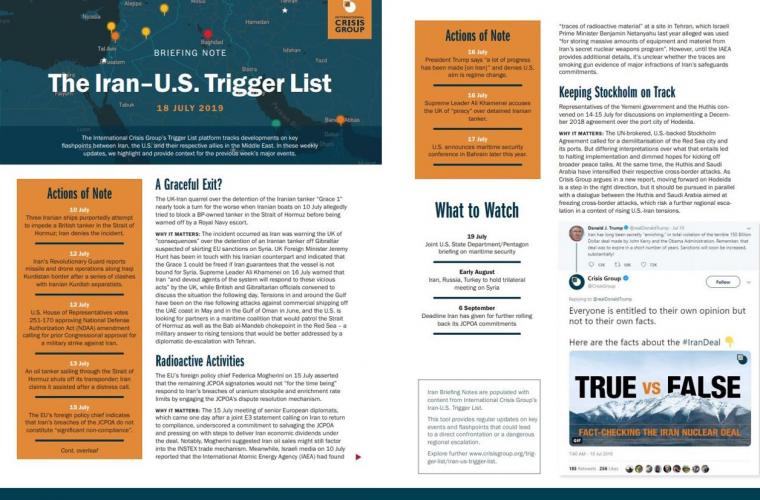 Saving the Stockholm Agreement and Averting a Regional Conflagration in Yemen