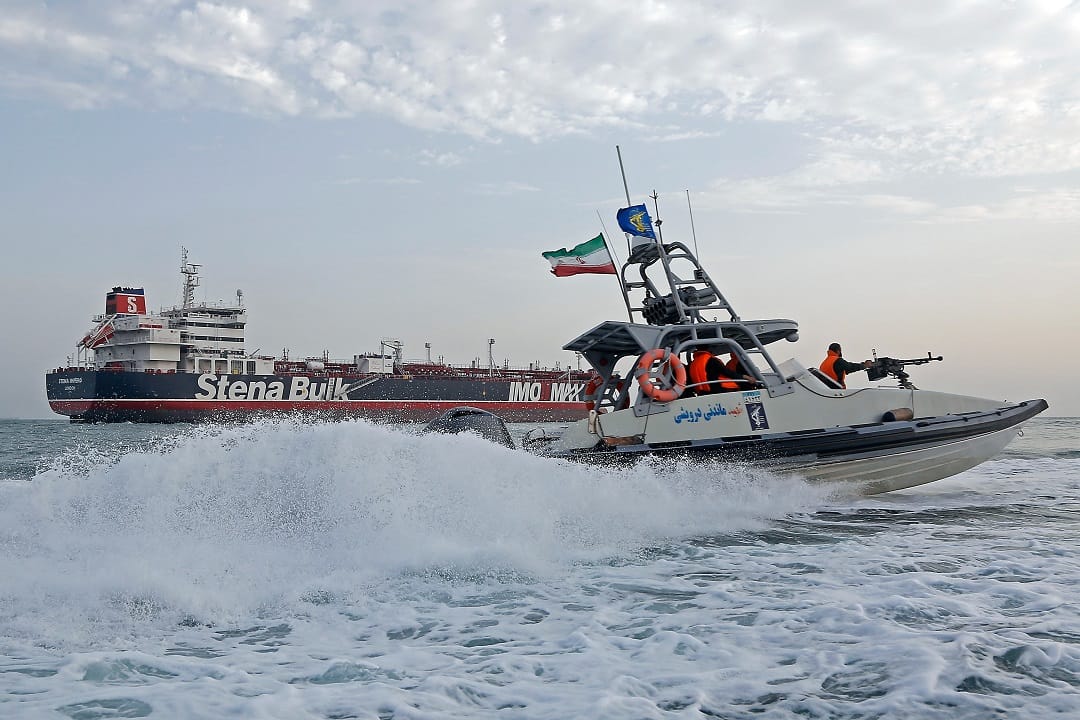 18 July: U.S. announces downing of Iranian drone in the Strait of Hormuz, which Tehran denies.

19 July: Iran detains a UK-flagged tanker in the Strait of Hormuz.

The Islamic Revolutionary Guard Corps (IRGC) on 19 July seized the UK-flagged Stena Impero in the Strait of Hormuz.

Why it matters: Tehran had telegraphed its intention to retaliate for the UK’s apprehension of an Iranian tanker off Gibraltar in early July, and failed in its first attempt on 10 July after a Royal Navy escort intervened. Foreign Secretary Jeremy Hunt on Monday denounced the Iranian move as “an act of state piracy”. But while the U.S. has been trying to muster support for a naval coalition dubbed Operation Sentinel to conduct surveillance and escort ships, the UK is leaning toward a separate European initiative that, Hunt noted, “will not be part of the U.S. maximum pressure policy on Iran because we remain committed to preserving the Iran nuclear agreement”. It remains to be seen how incoming Prime Minister Boris Johnson will tackle the immediate standoff with Tehran while navigating between allies across the channel and the Atlantic.

Secretary of State Mike Pompeo on 22 July announced U.S. sanctions against a Chinese company and its chief executive, stating that “they violated U.S. law by accepting crude oil” from Iran.

Why it matters: The use of sanctions has been a key element in the U.S. “maximum pressure” campaign against Iran. As Crisis Group breaks down in a new interactive infographic, the Trump administration has designated around 1,000 Iranian or Iran-linked entities since 2017, affecting an estimated 80 per cent of the country’s economic sectors. But while the impact of these restrictions is economically devastating (Iran’s GDP is expected to contract 6 per cent this year, and crude exports have nosedived) the limits of an approach that relies on coercion alone are evident: the campaign has failed to induce favourable strategic shifts from Tehran while spurring countries that don’t agree with the policy to find ways of bypassing the U.S. (eg, Europe’s INSTEX mechanism). Beijing on 23 July condemned the new U.S. sanctions and described it as “bullying” – perhaps an indication that it may increasingly challenge Washington’s dictates and increase its imports of Iranian crude.

Foreign Minister Javad Zarif on 18 July proposed that Iran’s parliament could “ratify the Additional Protocol and [President Trump] can lift the sanctions he set”.

Why it matters: Under the terms of the JCPOA, Iran is provisionally implementing the Additional Protocol to the IAEA’s Comprehensive Safeguards Agreement. This expands the agency’s reach to all parts of state’s nuclear fuel cycle and provides greater access rights. Iran is supposed to ratify it by 2023 at the same time the U.S. is supposed to lift (as opposed to waive) its nuclear-related sanctions. In other words, these steps would be moved forward by four years. There is zero likelihood of the administration accepting this proposal and removing its primary leverage tool of sanctions, but it could be read as a signal that Tehran is looking for a way to gauge the White House’s interest in pursuing a new arrangement. It could encourage mediatory efforts that seem to be stepping up in light of growing tensions between Iran and the U.S.: Senator Rand Paul reportedly met with Zarif in New York on 18 July, a senior Iranian diplomat was in Paris on the 23rd and Oman’s foreign minister is heading to Tehran on the 27th. Any de-escalatory steps are as overdue as they would be welcome, but thus far the maximum either side is willing to offer is less than the minimum the other appears willing to entertain.

6 September: Iran's next deadline for reducing its JCPOA commitments. 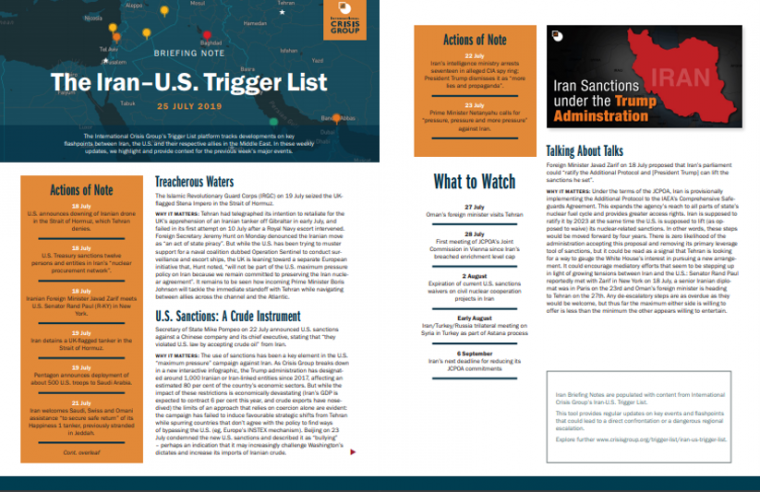