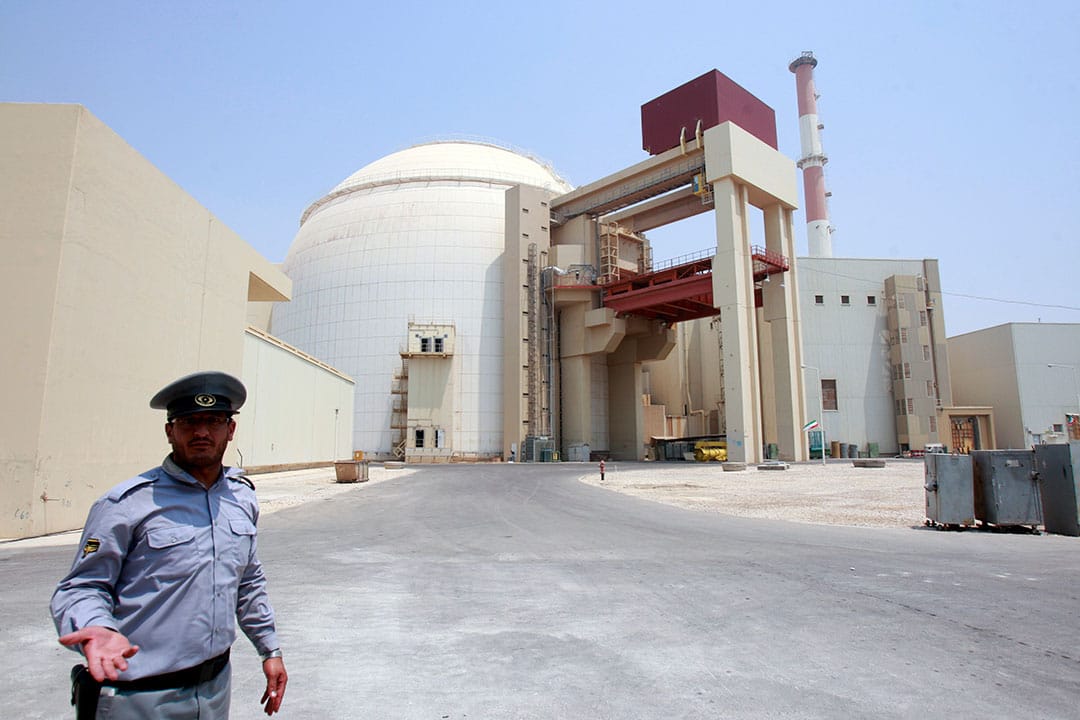 Negotiations by nature never produce perfect outcomes. The compromise announced by Iran and the P5+1/E3+3 is by no means perfect, but it is the best path for returning Iran to the concert of nations and ensuring that its nuclear program will remain peaceful. An effective agreement should not be compared to an ideal one that is unattainable. It should be compared to its alternatives: a return to an escalating cycle of more sanctions and more centrifuges, an Iranian bomb or bombing Iran. Here are ten reasons why this deal is much better than no deal:

Breakout time – which would be two months on Day 1 if no deal is agreed – is the time required to enrich 25kg of highly enriched uranium, enough for a single bomb, should Tehran decide to build one. It estimates the time needed today to produce fissile material for a bomb, not the bomb itself. The weaponisation process could take an additional six to eighteen months. Given Iran’s indigenous nuclear know-how, no realistic agreement could make breakout impossible, but a good deal will stretch out the breakout time to more than twelve months and thus deter Iran from pursuing that option. Lengthening the breakout time has been achieved through a combinations of constraints on centrifuges and enriched uranium stocks. Read five common misperceptions about this theoretical concept.

Western intelligence agencies have long concluded that Iran will not, in fact, use its intrusively monitored nuclear facilities to pursue a nuclear weapon; instead should Iran decide to build nuclear weapons, it would be more likely to try to “sneak-out” in a clandestine facility. Both Iranian enrichment facilities, in Natanz and Fordow, were built covertly and declared only after being exposed by Western intelligence agencies. This agreement has two main solutions for preventing any possible sneak-out: transparency and monitoring. The agreement ensures that Iran implements the Additional Protocol which will give the inspectors enhanced access to declared and undeclared facilities; requires Iran to give access to centrifuge production and assembly workshops; and allows the agency to account for stocks of raw material such as carbon fibre and maraging steel.

Uranium is enriched by pumping uranium hexafluoride gas (UF6) into a series of tall rotating cylinders that operate under vacuum, called centrifuges. The most common type of Iran’s centrifuges is the IR-1, based on a 1970s Dutch design and prone to mechanical failure. The more advanced Iranian IR-2m centrifuge is based on a modified German design and is believed to be three-five times more powerful than the IR-1. Iran has developed other more sophisticated iterations of these centrifuges in its Research and Development sector, namely the IR-4, IR-5, IR-6, IR-6s and IR-8. Although the number of centrifuges is highly symbolic, the agreement should not be evaluated on the basis of any single feature. Instead, it should be judged on its overall impact on reducing Iran’s nuclear capacity and improving capabilities to detect any ongoing or future Iranian weapons program. Read more on the significance of this issue.

Uranium enrichment produces fuel both for nuclear reactors and weapons. For a dozen years, it has been at the crux of Iran’s standoff with the West, with the former insisting on maintaining it, in some form, and the latter seeking to abolish it in any form. With the 2013 Joint Plan of Action, the P5+1 accepted that any plausible, durable deal would involve Iran maintaining some enrichment capability. The challenge in the comprehensive agreement was to design a limited enrichment program with which all sides can live. Reducing Iran’s uranium enrichment capacity is about much more than reducing the number of centrifuges. The limits on the level of enrichment and size of the enriched material stockpile stretch out the breakout time, which combined with enhanced international monitoring capabilities, provides sufficient time to detect and disrupt any effort by Iran to dash toward nuclear weapons in the future.

Iran believes that development and testing of advanced centrifuges is its right and essential for the country’s scientific progress. The P5+1 fears that R&D could enhance centrifuge efficiency and raise the risk of concealment in a covert facility, as a small number of more efficient centrifuges would be easier to hide. The middle ground solution that the parties agreed upon is in line with Crisis Group’s recommendations that can be reviewed here.

Iran informed the IAEA in September 2009 that it was in the midst of constructing a 3,000-centrifuge enrichment facility deep under a mountainside near the city of Qom. Fordow is believed to be impervious to an Israeli strike. Iran began enriching to 19.75 per cent level in Fordow in January 2012 and completed installing all centrifuges in the facility by November that year. However, only four cascades were operational before activities were suspended in January 2013. Crisis Group was among the first outside observers who proposed converting the facility into an R&D centre in 2012.

Concerns over the heavy-water reactor in Arak, ostensibly aimed at producing isotopes for medical treatments, centre on its potential to produce significant quantities of plutonium in its spent fuel, providing a second path to a nuclear bomb. First revealed in 2002, the reactor was 87 per cent constructed when the talks started in 2013. The P5+1 sought to replace it with a light-water research reactor fuelled with enriched uranium that produces less plutonium, so is less conducive to proliferation. Iran maintained that its scientists had endeavoured for more than a decade to overcome technological challenges for building the Arak reactor and that converting it into a light-water reactor is tantamount to starting from scratch. The final solution redesigns the reactor and makes it less conducive to proliferation. Since plutonium can be extracted from the spent fuel only by a chemical process, Iran has also pledged to ship out its spent fuel and not to construct the necessary reprocessing facilities.

In parallel to erecting a firewall between Iran’s military and civilian nuclear capabilities, the deal puts in place additional transparency and verification measures to ensure that Iran’s nuclear activities remain civilian and that there is sufficient time to detect noncompliance. The IAEA Safeguards System is designed to prevent the diversion of fissile material from civilian use. The Additional Protocol requires states that accept it to provide the IAEA an expanded declaration that contains information covering all aspects of their nuclear fuel cycle activities; grant the IAEA broad access to all relevant locations and nuclear sites, including allowing it to use all verification technologies; and streamline procedures for designating inspectors and granting them long-term multiple entry visas. Code 3.1 of the subsidiary arrangement of a state’s safeguards agreement with the IAEA specifies when it must report a new facility to the IAEA. Modified Code 3.1 requires submission of design information to the IAEA as soon as a new facility is planned in contrast to the original version which required reporting only 180 days prior to introduction of nuclear materials at the facility. The modified Code 3.1, like the Additional Protocol, is voluntary.

Iran is the most sanctioned country in the world and these measures have taken a tremendous toll on the country’s economy. But as Crisis Group wrote in February 2013, sanctions as a tool of coercive diplomacy are only as effective as the prospect of relieving them in exchange for policy shifts is real. In other words, regardless of their efficiency as a political instrument, imposing sanctions in order to modify behaviour is only useful if they can be removed in response to altered practice in a calibrated and flexible way. Without such nimbleness, the West would not have been able to offer Iran necessary incentives for curbing its nuclear program. This interactive highlights the major unilateral, multilateral and international sanctions imposed on Iran. 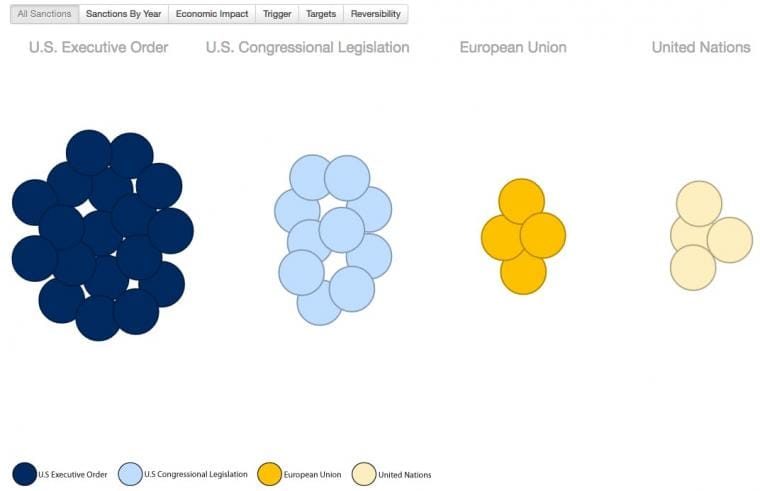 According to the 2013 Joint Plan of Action, the final agreement should include international civil nuclear cooperation, including among others, on acquiring modern light-water power and research reactors and associated equipment; the supply of modern nuclear fuel; and agreed R&D practices. These positive incentives are as important as sanctions that served as negative incentives. Read Crisis Group’s recommendations on this subject.

Spider Web: The Making and Unmaking of Iran Sanctions

Iran and the P5+1: Solving the Nuclear Rubik’s Cube