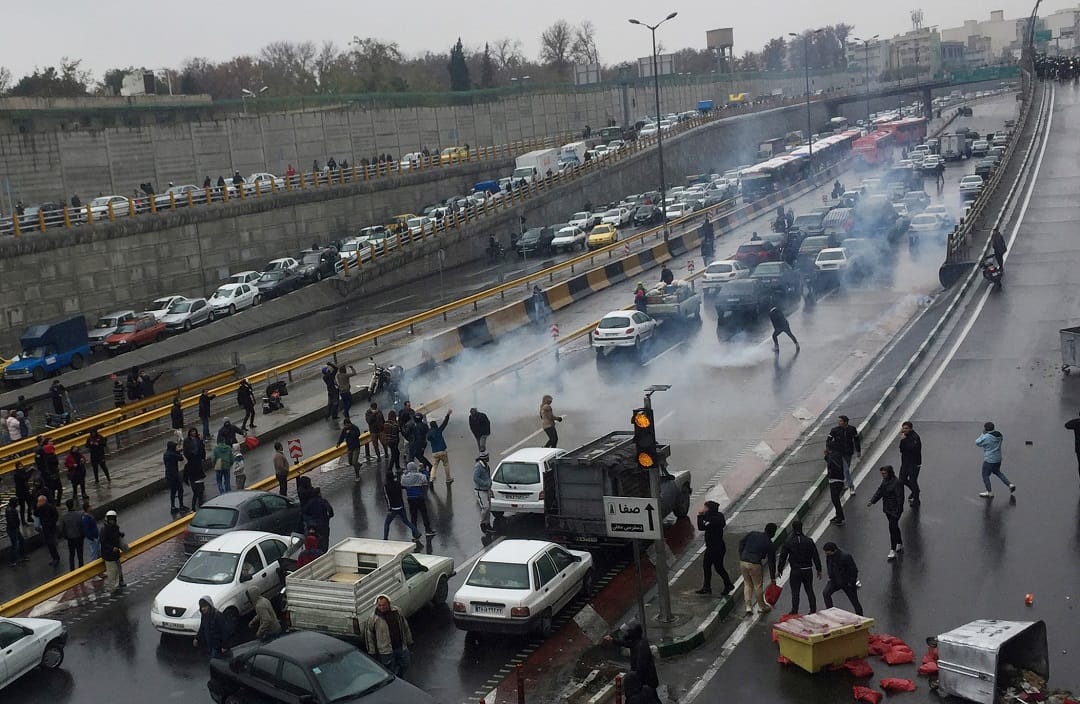 Learning the Right Lessons from Protests in Iran

November’s protests show that the Islamic Republic is not as secure as it thinks. But neither, as their swift suppression demonstrates, is it as vulnerable as its foes hope. Iran should halt crackdowns and start serious reform, and Tehran and Washington should de-escalate tensions.

Iran is the latest Middle Eastern country this year to experience massive popular unrest, and it is also one where the response has been particularly brutal. Widespread protests followed the government’s abrupt decision on 15 November to raise gas prices. What ensued marked one of the most violent clampdowns in the Islamic Republic’s history. With the demonstrations largely quelled, at least for now, the leadership is touting its ability to maintain control. But absent major political and economic reforms, the reprieve might well prove short-lived. Meanwhile, lowered tensions with the U.S. or improved relations with Gulf Arab neighbours are at once more acutely necessary and potentially less likely, particularly if Tehran chooses this moment to take further adversarial steps on the nuclear or regional fronts or if its rivals, assessing that the Islamic Republic might collapse, conclude that now is not the time for conciliation. Either of those moves would be a grave mistake. Instead, Tehran should opt for long-overdue political and economic reforms, and Iran, the U.S. and its allies should pursue de-escalation and diplomacy.

What precisely transpired throughout the country in the second half of November is hard to fully ascertain. According to Amnesty International’s most recent assessment, security forces killed over 200 protesters within a matter of days, wounding and arresting still more. What is beyond doubt is that the Iranian leadership was fast and ferocious in quashing the dissent.

Iran has undergone major domestic turmoil three times in the last decade. The 2009 uprising (also known as the Green Movement) followed the disputed re-election of President Mahmoud Ahmadinejad. During more than ten months of sporadic protests, security forces killed 72 demonstrators. Then, in December 2017 and January 2018, protests erupted in more than 100 Iranian cities for several weeks due to economic malaise. Clashes between the riot police and demonstrators left more than two dozen dead, but the authorities showed restraint, limiting the toll. This time was different. According to The New York Times, security forces deployed machine guns in the south-western city of Mahshahr to fire live ammunition into a crowd, killing as many as 100 protesters – including many ethnic Arabs – in a single incident. An internet blackout prevented outside observers from learning of these events as they occurred.

Predictably, Iranian officials say they see a foreign hand behind the unrest. The interior ministry asserts that up to 200,000 people joined the riots, in which they vandalised more than 700 bank branches, damaged 140 other government buildings, and set fire to hundreds of cars and motorbikes. In remarks on 27 November, Supreme Leader Ali Khamenei claimed that “the enemies had spent a great amount of money designing this conspiracy and were waiting for an opportunity to implement it”. A senior Iranian official told Crisis Group that attacks on public property seemed coordinated, adding that targeting of critical infrastructure – such as ports, food storage silos and refineries – is not in line with typical protest patterns in the country. As Tehran sees it, the coincidence of tumult in Iran, Iraq and Lebanon suggests an orchestrated campaign aimed at curbing the Islamic Republic’s regional clout; they point to statements coming out of Washington as vindicating their view. The inconvenient truth, however, is that in each country the protests are primarily expressions of fury at failed domestic policies.

Government critics underscore that frustration has reached boiling point with a system that views dissent as synonymous with treason and reacts to every display of popular discontent with increasingly unbridled brute force. “To what point do you intend to use violence to deprive people of their most basic rights and essential needs as citizens?”, asked leading Iranian artists in an open letter. The Green Movement’s leader, Mir-Hossein Mousavi, who has been under house arrest since 2011, went so far as to liken the government’s crackdown to the Shah’s attempts to stifle a nascent revolution more than four decades ago.

Ultimately, and while one cannot rule out foreign involvement, it seems clear that pent-up anger at political stagnation and economic stagflation – a combination of high inflation and deep recession – as well as at endemic corruption and mismanagement created a ticking bomb that the 15 November austerity measure detonated. President Hassan Rouhani’s administration justified the sudden fuel price hike as a necessary reallocation of increasingly scarce resources away from expensive petrol subsidies – which are known to encourage smuggling – to allow for $2.5 billion in savings that the government could hand out to 18 million Iranian households. Beyond the sharp increase in prices, which went from 10,000 to 15,000 rials per litre (and double that for those exceeding a monthly quota), an overnight rollout with little forewarning likely aggravated the response. The hike became a political football before Ayatollah Khamenei broke precedent and took responsibility for it, uniting the establishment behind suppressing the riots.

The Iranian leaders may take solace in their apparent ability to corral the protests, but it would be the wrong conclusion. There are numerous examples of repression backfiring, hardening opposition and in some cases toppling governments that once seemed invulnerable. It would likewise be a mistake for Tehran to conflate its ability to stop unrest with success in addressing the grievances that prompted it. If, either persuaded that the demonstrations are of foreign provenance or convinced that engaging in reforms would signal weakness, the regime fails to curb corruption, enforce structural economic reforms and countenance more pluralism within political institutions, it will at best be buying time until the next standoff between state and society. Of particular concern is the situation in provinces where Arabs, Kurds and other minorities reside and where repression could set off armed resistance leading to civil strife. With or without U.S. sanctions, Iran’s economic and political systems are in urgent need of an overhaul. As the level of street anger shows, there may not be much time to undertake it.

Of particular concern is the situation in provinces where Arabs, Kurds and other minorities reside and where repression could set off armed resistance leading to civil strife.

A key question is how these developments will affect both the U.S.-Iranian showdown and animosity between Iran and its Gulf neighbours. One could imagine that Tehran, shaken by the scale of unrest and appreciating the depth of its economic travails, would seek to de-escalate on both fronts, and notably to urgently seek a deal with Washington that would alleviate the economic pressures. Crisis Group has previously described the contours of a possible deal: Iran resuming compliance with the 2015 nuclear accord and agreeing to enter negotiations over a broader one (covering both a longer timeline and regional issues) in exchange for the U.S. providing Iran with meaningful sanctions relief. One could imagine, too, that the Trump administration, understanding that its “maximum pressure” has neither moderated Iran’s regional behaviour nor led it to accept tighter nuclear constraints, would seize the opportunity to reach such an accord.

One could imagine such a scenario, yet one should also anticipate a more ominous one. Indeed, Tehran and Washington appear to have embraced diametrically opposed interpretations of the turmoil in Iran and the tide of regional events. Despite continuing scattered protests, the Iranian leadership has declared victory in foiling yet another “plot” by its adversaries – namely the U.S., Israel and Saudi Arabia – to destabilise it. It resorted rapidly to an iron-fist approach because it saw this “plot” as part of the “maximum pressure” campaign, which Tehran views as a form of economic warfare. It is ever more suspicious of the Trump administration’s intentions and may be reluctant to negotiate with the U.S. absent prior, significant sanctions relief. Nor does the Islamic Republic necessarily feel as desperate as its foes may believe. Iranian officials have noted to Crisis Group that the speed with which they were able to quiet the streets, regardless of the cost, should demonstrate to Washington that they are in full control. They claim that their swift crackdown, coupled with the string of attacks over the past few months on shipping lanes and energy infrastructure in Saudi Arabia, attributed to them by the U.S. and its allies, demonstrates their power at home and throughout the region, while showcasing their enemies’ vulnerabilities.

Washington seems to have reached an entirely different conclusion: that “maximum pressure” is working, as it starts to destabilise Iran as well as some of its allies in the region, and that now is the time to ratchet up, not relax, the pressure of sanctions. Tellingly, Washington has simultaneously blamed the Islamic Republic’s own policies – not its draconian sanctions – for the country’s economic crisis, expressed support for the protesters and evinced pleasure at the unrest in Iran. The perception of Iranian vulnerability is only reinforced by the protests in Iraq and Lebanon against the political establishments in those countries, which are at least in part supported by Tehran. Indeed, while the Iraqi and Lebanese protests are animated by widespread frustration with corruption and mismanagement, they also contain a strong thread of anti-Iranian sentiment.

The impact of the protests on Iran’s relations with Saudi Arabia and the United Arab Emirates is less certain. Before the protests, and following incidents in shipping lanes in May-July and the unprecedented attack on Saudi Aramco oil facilities in September, Abu Dhabi and, to a lesser degree, Riyadh, had begun to explore diplomatic means of de-escalating tensions. Both may share Washington’s conviction that the Islamic Republic is badly damaged and ought not to be thrown a lifeline. Yet their fear of a broader military confrontation presumably has not abated and therefore their incentives to deepen channels of communication could remain.

Simultaneous turmoil in Iraq and Lebanon – two counties in which Iran has both deep interests and significant political influence – adds to a complicated geostrategic picture and evidently has exacerbated Tehran’s concerns. But for it to encourage allies in Baghdad and Beirut to adopt its repressive playbook could well hasten the collapse of the political order in the former and an economic meltdown in the latter.

For their part, the U.S. and its regional allies should look beyond the binary outcomes of regime capitulation or collapse. To the contrary, “maximum pressure” is most likely to produce further instability in Iran that shakes the Islamic Republic without threatening it existentially, greater suffering among the Iranian people, acceleration of the country’s nuclear program and intensification of Iran’s regional efforts. Pursuing the kind of arrangement outlined above and suggested by French President Emmanuel Macron – pursuant to which Tehran’s constructive engagement on nuclear as well as regional matters is reciprocated by economic reprieve – offers the better course forward. Whether or not this endeavour succeeds, the Gulf states and Iran have every reason to redouble their incipient bridge-building efforts to reduce the chances of an unintended military confrontation.

After the Aramco Attack: A Middle East One Step Closer to Its “1914 Moment”