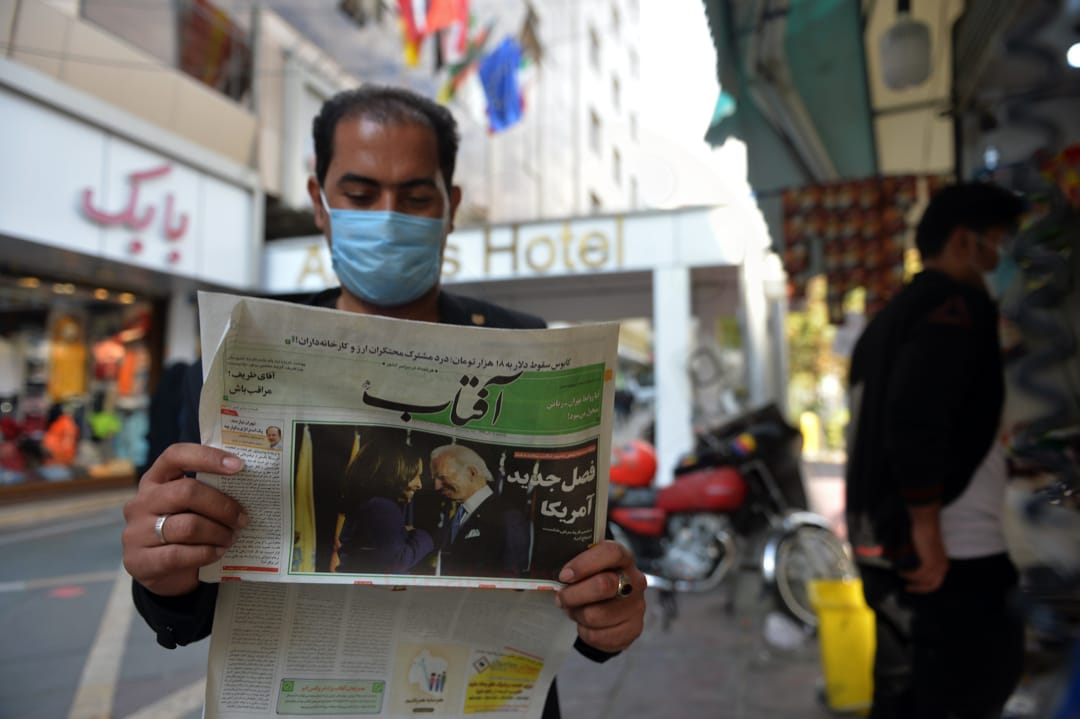 A view from Tehran's street as a citizen reading the news regarding the U.S. elections in newspapers, on November 09, 2020 in Tehran, Iran. Fatemeh Bahrami / Anadolu Agency via AFP.
Statement / Middle East & North Africa 10 December 2020

The Vital but Delicate Task of Reviving the JCPOA

President-elect Joe Biden says the U.S. will rejoin the Iran nuclear deal if Tehran resumes full compliance. Iran says it will do so if Washington relaxes sanctions. Each side should use the framework that already exists rather than try to squeeze the other for concessions.

Bruised and battered, the Iran nuclear deal, known formally as the Joint Comprehensive Plan of Action (JCPOA), appears to be on its last legs. Since 2018, it has been under relentless assault: the U.S. withdrawal from the agreement, the Trump administration’s “maximum pressure” campaign against Tehran, unattributed acts of sabotage at Iranian nuclear facilities and the killing of Iran’s top nuclear scientist, along with Iran’s own growing defiance of the JCPOA’s restrictions, all threaten to terminate it a mere five years after it came into being. Joe Biden’s election as U.S. president offers a last opportunity to prevent its collapse. His administration, along with Iran’s leadership and other JCPOA participants, will have to act quickly after 20 January in order to halt a gathering crisis.

The Trump administration came into office with an unconcealed, powerful animus against the JCPOA. Upon exiting the deal in May 2018, it contended that an alternative policy, based on coercion, would not only yield an improved agreement to roll back Iran’s nuclear program beyond the terms sealed in Vienna, but also would curb Iran’s regional activities. The past two and a half years have delivered an unambiguous negative verdict on these claims. Nearly 1,500 unilateral U.S. sanctions designations, including sweeping restrictions on Iran’s energy and financial sectors, have undoubtedly wrought significant damage to Iran’s economy; U.S. Secretary of State Mike Pompeo declared that 77 rounds of sanctions had deprived the Iranian government of some $70 billion in income. But where “maximum pressure” was meant to further limit Iran’s nuclear work, instead it led to its expansion; where it meant to temper Tehran’s regional influence, instead it heightened tensions, triggering multiple brushes with open conflict.

Where 'maximum pressure' was meant to further limit Iran’s nuclear work, instead it led to its expansion.

Even in its twilight, the Trump administration shows little sign of letting up in its resort to coercion. To the contrary: a steady rollout of unilateral U.S. sanctions designations, punctuated by the 27 November killing of the senior Iranian nuclear scientist in an operation widely attributed to, if unclaimed by, Israel, suggests a determination by Washington and some of its allies to use the period between now and President-elect Biden’s inauguration on 20 January to further its goals. The intent appears to be manifold: inflict maximum pain on the Islamic Republic; restrict the incoming Biden administration’s room for manoeuvre via legal and political obstacles; and, possibly, provoke Tehran into responding – whether by staging military operations or by accelerating its nuclear program – in ways that could fatally wound the JCPOA.

That the JCPOA survives at all bears witness to the manner in which, even in its current atrophied form, it continues to strategically benefit all parties involved in efforts to salvage it. For the P4+1 (the UK, France, Germany, Russia and China), the agreement remains the best available vehicle for what they regard as the imperative of keeping Iran’s nuclear program in check. For Tehran, the promise of economic normalisation under a different U.S. administration as well as the continued political and diplomatic returns, notably in terms of Iran’s relations with Europe, have justified sticking to the deal, even as internal pressure to abandon it has grown.

With the election of Biden, who repeatedly has signalled willingness to bring the U.S. back into JCPOA compliance if Iran were to do the same, and Tehran’s stated readiness to reverse its mounting violations of the deal if Washington lifts sanctions, all sides now have a chance to revive the JCPOA. But how they seize that opportunity will be crucial and remains a matter of intense debate.

In Washington and some European capitals, some are urging the president-elect to at most entertain only a partial lifting of U.S. sanctions imposed in violation of the JCPOA, conditioning further relief on Iranian concessions beyond the terms of the original deal or issues beyond its scope. The argument has appeal. If the Biden administration were to concede up front the immense U.S. financial leverage accumulated under President Donald Trump, the argument goes, Tehran would have little incentive to keep talking, including on issues such as JCPOA sunsets, ballistic missile development and regional dynamics that the U.S., some of its regional partners and European parties view with concern.

Holding a return to full JCPOA compliance subject to resolving everything runs the risk of solving nothing at all.

Yet the experience of the past several years should offer a more jaundiced view of the usage of such leverage. Iran undeniably has been under intense pressure, yet, far from succumbing to it, has chosen to build leverage of its own, accumulating more enriched uranium and installing more advanced centrifuges. For Biden to replace “maximum pressure” with a slightly less aggressive version of it would be to play the same failing hand with different stakes and expect better results. Recently adopted Iranian legislation compelling an immediate increase in uranium enrichment rates and threatening future escalation – notably, ceasing to abide by the Additional Protocol to the Non-Proliferation Treaty, which will constrain the work of international inspectors charged with monitoring Iranian nuclear facilities – if sanctions are not lifted by early February 2021, underscores the risk of leverage-focused one-upmanship. Holding a return to full JCPOA compliance subject to resolving everything runs the risk of solving nothing at all.

Moreover, if the U.S. were to offer less than a full return to the JCPOA, then Iran undoubtedly would insist on less than full compliance with the deal. Reaching a satisfactory understanding regarding steps both would need to take almost certainly would involve bitter, drawn-out negotiations, during which time Iran would advance its nuclear program still further. All of which likely means that the Biden administration would face a mounting nuclear crisis in its early months.

Critics of this argument charge that it implies the U.S. should surrender to Iranian nuclear blackmail. True, negotiating under the shadow of Iran’s nuclear threat is hardly appealing. But the critique would be more persuasive if the U.S. had not taken the first step in withdrawing from the deal – in effect resorting to sanctions blackmail of its own. For the U.S. to lift sanctions in exchange for Iran rolling back its nuclear advances would not be capitulating to intimidation, but rather conforming to a pre-existing commitment.

On the Iranian side, too, the temptation exists to squeeze the U.S. for concessions, in this case before rolling back nuclear advances. Iran has demanded compensation for four years of unfulfilled promises of economic relief, is suggesting it wants assurances that the U.S. will not unilaterally seek to “snap back” multilateral sanctions once it rejoins the JCPOA, and insists that the U.S. lift all sanctions imposed by Trump. It is hard to see a Biden administration meaningfully agreeing to any of these measures: compensation would be akin to a gift to Iran, which would prove politically toxic in the U.S.; snapback is a right that was the subject of intense negotiations among JCPOA parties and the U.S. cannot be expected to relinquish; and some of the post-2017 sanctions may well be justified – those permitted under the JCPOA and that any U.S. administration could have been expected to impose.

Finally, Iranian officials have said that rather than permitting the U.S. to rejoin the JCPOA, Tehran will demand that it instead comply with UN Security Council Resolution 2231, which endorsed the nuclear deal. It is a curious position. Perhaps their calculation is that by coming into compliance with Resolution 2231, the U.S. would have to lift its sanctions, but by simultaneously remaining outside the JCPOA, it would not regain its rights under the accord, including to unilaterally snap back UN sanctions. If so, the reasoning seems fallacious, a mirror image of the Trump administration’s claim in August 2020 that the U.S. was not a participant to the JCPOA yet could still invoke the provisions of 2231 reserved for JCPOA participants – a contention that Tehran and virtually all others correctly dismissed out of hand.

Iran may believe that it can pressure the Biden administration into accepting one or more of its demands on the theory that the newly elected president, faced with economic, health and social crises, will be determined to avoid a nuclear crisis at all costs. That would be a fundamental misread. True, as noted, Biden almost certainly would prefer not to have to deal with a rapidly growing Iranian nuclear program. But Tehran would be wrong to assume that his administration would hesitate to maintain or even intensify pressure on the Islamic Republic – this time in coordination with European allies – if it were to issue excessive demands.

A far more constructive approach would be to address the nuclear issue on the basis of the agreement that already exists: Iran would verifiably reverse its breaches, while the U.S. would return to compliance with the JCPOA and restore transatlantic cooperation, and all sides would begin to dispel the atmosphere of tension and distrust. Such an approach could lay more solid groundwork for the follow-up negotiations to which the U.S. and its European partners aspire. Neither side would lose leverage in this scenario, as both would have proven how swiftly they can regain it.

A far more constructive approach would be to address the nuclear issue on the basis of the agreement that already exists.

A good place to start is the 16 December meeting of the JCPOA’s Joint Commission convening the P4+1 and Iran, to be followed by a ministerial-level session. Despite the Trump administration’s absence, participants should enter those deliberations with an emphasis on clearly and resolutely underscoring their mutual interest in consolidating the existing agreement. They could do so by identifying the steps Iran would need to take to swiftly and verifiably reverse its existing breaches, as well as offering Tehran the assistance it may require to do so, endorsing the lifting of U.S. sanctions as an imperative for stabilising the agreement, and pledging to do what they can to ensure that such relief will deliver tangible dividends. Such action would send a strong signal to the U.S. that if a Biden administration, which no doubt will encounter domestic opposition to rejoining the deal, proceeds with a renewed commitment to go down that path, it will do so with international support.

Even in the best-case scenario, of course, obstacles will abound: the U.S. and Iran will still need to agree, inter alia, on sequencing of mutual steps; on which U.S. sanctions are to be lifted; and on whether, when and over what to initiate the subsequent talks. But at least they will be guided by a shared desired outcome rather than venturing into the unknown. Anything other than a relatively clean, mutual return to the JCPOA is likely to prompt a crescendo of demands from both parties. Meanwhile, sanctions on Iran would remain or even intensify; Tehran’s nuclear program would expand.

Any attempt by either the U.S. or Iran to tinker with – let alone fundamentally alter – the terms of the deal on the theory that it has more leverage than the other would be a dangerous gambit. At best, it would amount to loss of precious time. At worst, it would amount to squandering a precious opportunity.

Behind the Snapback Debate at the UN

Iran: The U.S. Brings Maximum Pressure to the UN