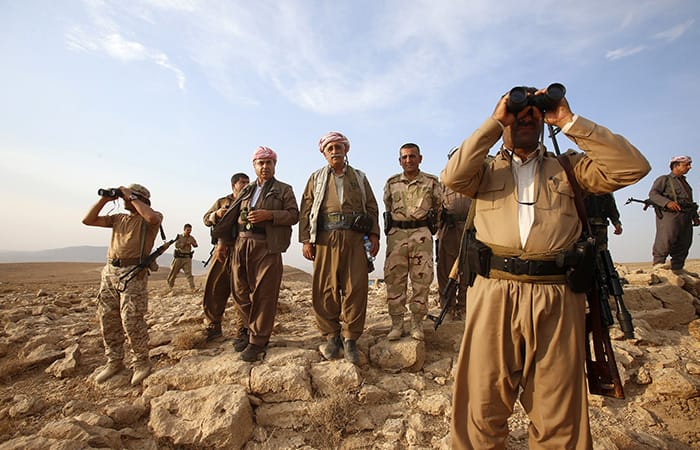 This commentary is drawn from a speech delivered by Crisis Group’s Middle East and North Africa Program Director Joost Hiltermann at the Sulaimani Forum in Suleimaniya, Iraq, on 11 March 2015.

I first came to Suleimaniya in April 1991, only days after the Kurdish uprising was crushed by Iraqi forces. I drove up from Baghdad in the vehicle of an international humanitarian organisation. When we reached Suleimaniya, it was a ghost town. We found our way to the hospital, which was empty except for a few doctors who had stayed behind, and the first of a wave of victims limping down from the mountains. Some had horrendous injuries from landmines they had stepped on while trying to flee.

That first image of Suleimaniya has coloured my views as I have watched Iraqi Kurdistan grow and flourish over the years. Today, the region faces a new set of landmines, ones that if not marked and defused properly, could have dramatic consequences for the precarious region’s autonomy and unity as it faces new threats like the Islamic State (IS, also known as Daesh, ISIS or ISIL).

The IS explosion onto the Iraqi scene has crumpled the last remaining supports of Iraq’s fragile state and revealed the total fragmentation of Iraq’s political system. Worse, the jihadis’ arrival triggered a militarised reaction, not a political one. Self-defence is certainly understandable in the short term, but an armed response will soon prompt questions on other fronts – both political and economic. Another phenomenon is the “militia-isation” of Iraq as the state has imploded. Mostly Shiite in membership and outlook, these militias have been around for some time, but are now invigorated by the call to confront IS.

Fragmentation, militarisation and militia-isation have opened the door to a final problem: foreign intervention, which is empowering actors along partisan lines, backing what is left of the Iraqi state, the two Iraqi Kurdish parties’ separate peshmerga forces, or the various Shiite militias. Iran has sent senior Revolutionary Guard officers to advise, train, arm and command militias as well as one of the Kurdish parties. The U.S., leading a coalition of 60-plus nations, has sent military advisers and carried out airstrikes against IS in both Iraq and Syria.

One might have expected the Kurdistan Regional Government (KRG) to rally a unified national front against a common enemy. In reality, the Iraqi Kurdish response has also been fragmented, with different political factions and leaders sending their own private guards, oil protection units and peshmerga forces to fight IS. These groups have tried to defend the KRG’s front lines against IS, replacing the Iraqi army in areas they have long claimed as part of Kurdistan, including Kirkuk and its supergiant oil field. The reality is that these Kurdish forces have not been fighting inside the constitutionally recognised Kurdistan region at all, but within territories whose status is disputed with Iraq’s central government.

There is also the broader Kurdish-Iraqi relationship to consider. Baghdad and Erbil are being pushed apart by the way one of the two main Kurdish parties has openly called for Kurdish independence (while the other has not excluded it), by unilateral moves in the disputed territories, and by an ongoing quarrel over oil and money. Western states, Iran and Turkey, none of which want to see the break-up of Iraq, are meanwhile nudging them back together. The anti-IS coalition has channelled its “train-and-equip” program in support of the Kurds via Baghdad, forcing the two to cooperate. Baghdad and Erbil have also been pushed into an interim agreement on oil exports and budget disbursements, given that Kirkuk’s oil has been locked up by IS action and therefore needs an alternative export route to Turkey via Kurdistan.

There is talk of reconciliation, but Erbil and Baghdad’s moves have been expedient, not strategic, and prospects for a functioning federal system are as far off as ever. During the Sulaimani Forum in March, we were treated to the troubling spectacle of the Iraqi oil minister and the KRG’s natural resources minister squabbling in public over how the other side had failed to implement the interim deal. Instead, they could have used the occasion, with IS virtually on the doorstep, to show resolve and unity in the face of a common enemy.

Then there is Iraqi Kurdistan’s inter-party history. The strategic partnership between Masoud Barzani’s Kurdistan Democratic Party (KDP) and Jalal Talabani’s Patriotic Union of Kurdistan (PUK) continues in name only. The PUK is fading under the weight of internal divisions, a failure to attract young Kurds, and a sharp challenge from the pro-reform Gorran (“Change”) movement; it is barely kept alive today by Iranian political and military support as its peshmerga forces fight IS in the disputed territories.

There is a division of labour between the two parties along these front lines, but also a worrying competition. The PUK defends the south-eastern boundary stretching from the Iranian border to Kirkuk, while the KDP takes care of the line from there on up west to the Syrian border. The problem is the Kirkuk node, where the KDP peshmerga have taken over the rich Avana dome and Bai Hassan oil fields, whereas the PUK controls Kirkuk city, including the old and rapidly depleting Baba Gurgur dome. This unbalanced situation could germinate the seeds of renewed KDP-PUK conflict over oil, just as they fought over customs revenues in the 1990s, unless they find a way to revive the strategic partnership despite the shifting political balance.

So how can Iraqi Kurds build a long-term strategy to counter IS while strengthening their autonomy? They should consider the following priorities, all of which underline that any call for Kurdish independence now is premature.

The first is self-evident, and that is to secure the region’s southern boundary. Perhaps paradoxically, Erbil must work to strengthen the Iraqi state as a way of protecting its region from outside attack. Only a state capable of exercising full control over both Shiite and Sunni areas can provide security guarantees to the Kurds. Of course, a certain caution will be needed to ensure that, over time, Baghdad does not grow back into a threat for Kurdistan, but this is unlikely to happen anytime soon. The Iraqi state also remains an indispensable partner to the KRG, given the current economic crunch in Kurdistan and the absence of a dependable export channel through Turkey, which makes Iraqi Kurds almost entirely reliant on the Iraqi budget. A permanent deal on oil management and revenue-sharing would cement an equitable economic relationship between the central government and its Kurdish counterpart; enshrined in a federal framework, it would provide the Kurds with the tools they need to build up the region under their own direction, and allow it to flourish.

Working directly with local populations is another way to secure the southern boundary by keeping local communities from joining IS, which they will do if they feel excluded. The KRG should therefore seek to incorporate non-Kurdish actors into local security arrangements and make a renewed effort to negotiate the status of these territories with Baghdad. It cannot simply take them unilaterally – even if that is temporarily justified by the collapse of the Iraqi army – and expect to be able to keep them without, eventually, a nasty fight with the rest of Iraq.

Finally, Iraqi Kurdistan must put its own house in order. After 2003, the Kurds did well by moving into Baghdad and working to strengthen their autonomy from the vantage point of Iraq’s territorial integrity. In recent years, however, struggles in disputed territories have divided the Kurdish parties and distracted them from the more important task of building strengthened, unified institutions back home. The top priority should be to merge any parallel, party-affiliated security structures as remain today, and eliminate chronic party-based cronyism in public sector hiring. This is what young Kurds want; it is certainly what they deserve; and if the KRG will not give it to them, it will be only a matter of time before they will decide to go out and take it themselves.