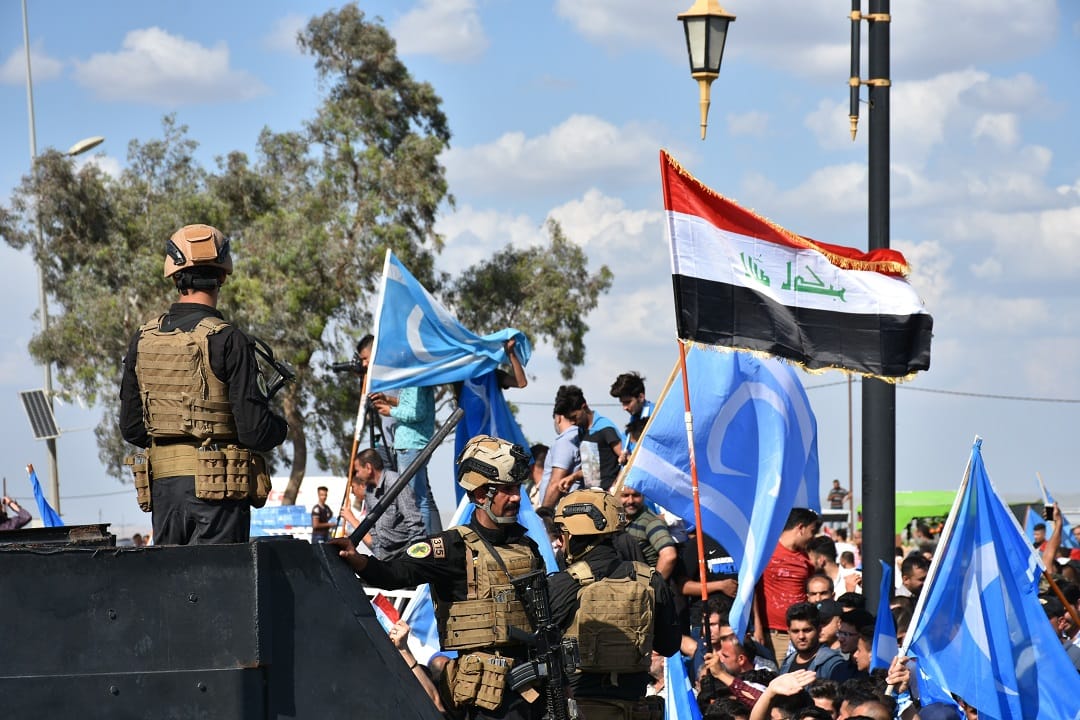 Hundreds of Turkmen block the Kirkuk- Bagdad road as they have taken to the streets to protest alleged electoral fraud, in Kirkuk on 14 May 2018. Ali Mukarrem Garip / ANADOLU AGENCY
Statement / Middle East & North Africa 24 May 2018

Widespread perceptions of fraud in May 2018 elections to Iraq’s Council of Representatives have triggered demonstrations in Kirkuk and fears of inter-ethnic violence. Crisis Group is calling for a vote recount in Kirkuk to restore confidence in the institutions vital to manage deeper divisions over the contested, oil-rich area.

The International Crisis Group is deeply concerned about developments in Kirkuk, a multi-ethnic governorate in northern Iraq. Contested election results, and the widespread perception that ballot boxes were tampered with, have triggered demonstrations in Kirkuk city and raised the potential for inter-ethnic violence. To help stabilise the situation and enable long-delayed discussions on power-sharing and security arrangements in Kirkuk and, ultimately, the area’s political status, Crisis Group is calling for a recount, exclusively in Kirkuk governorate, of ballots cast in Iraq’s 12 May 2018 parliamentary elections, or at least a thorough re-examination of the counting and tabulation process. Regardless of the outcome, such an exercise could help restore confidence in the electoral process as well as the credibility of institutions and actors whose role will be critical in addressing Iraq’s larger Kirkuk-related challenges down the road.

Kirkuk is an ethnically and confessionally diverse city and governorate with a long history of barely contained conflict.

Kirkuk is an ethnically and confessionally diverse city and governorate with a long history of barely contained conflict. The presence of oil has encouraged demographic engineering by whoever was in control. Iraq’s 2005 constitution designated Kirkuk, along with other mixed-population areas in a belt stretching from the Iranian to the Syrian border, as “disputed territories” whose status must be resolved. The UN Assistance Mission of Iraq (UNAMI) has at times worked to broker a solution to what it refers to as Iraq’s “disputed internal boundaries” – essentially the border between the Kurdish region and the rest of Iraq – as have non-governmental organisations.

On 12 May, quadrennial elections for Iraq’s 329-seat Council of Representatives (CoR) took place in each of its eighteen governorates. In Kirkuk, twelve seats were in play (a thirteenth is a quota seat for the Christian minority). Results tabulated by the local branch of Iraq’s Independent High Electoral Commission (IHEC) on the evening of 12 May and transmitted electronically to Baghdad indicated that the Patriotic Union of Kurdistan (PUK) had won half those seats, with the remainder divided evenly between the Iraqi Turkmen Front and the Kirkuk Arab Coalition.

This outcome in itself would not have been surprising: people generally (though not necessarily) vote by their ethnicity, and Kurds are the largest ethnic group in the governorate. In previous parliamentary elections, the overall results were similar.

This time, however, there were two striking incongruities: the PUK won in several non-Kurdish areas where the party is not known to have any support and has never won significant numbers of votes in the past; and turnout in Kurdish areas was low compared both to past elections and to the participation rate in Turkmen neighbourhoods and camps for the internally displaced, where many of the governorate’s Arab population have been living during and after the struggle against the Islamic State. The apparent reason for the low turnout in Kurdish areas was that many of Kirkuk’s Kurds were disaffected with the PUK following its October 2017 decision to allow Iraqi federal forces to retake Kirkuk from Kurdish control in the aftermath of the controversial Kurdish independence referendum the previous month.

When IHEC announced the final results, Arab and Turkmen groups staged protests over what they saw as manipulated ballot boxes, and demanded a recount; these protests are continuing and could trigger violence. It is usual for losers in a contest to challenge the result as well as the process, but in this case there seem to be grounds for questioning both. In a statement on 17 May, the head of UNAMI, Special Representative to the UN Secretary-General Jan Kubiš, called on IHEC “to act expeditiously in order to seriously address all complaints including, as necessary, the conduct of partial manual recount in selected locations, notably in Kirkuk”.

Following parties’ complaints lodged with IHEC, the electoral commission refused to order a recount in Kirkuk. The matter was then transferred to the Independent Judicial Panel, whose powers are outlined in a 2007 law concerning IHEC. The panel has yet to rule, but is expected to do so within two weeks. Its decision cannot be appealed.

Kirkuk’s Arabs and Turkmen suspect that sooner or later a Kurd-dominated provincial council will seek a vote on Kirkuk’s status and attempt to bring the governorate and its oil fields into the Kurdish region.

Contested election results are worrying in their own right, but in Kirkuk they have much more profound implications. Kirkuk has not had provincial elections since 2005 because its political leaders could not agree on an impartial mechanism for establishing a voter registry, nor on an acceptable interim power-sharing arrangement apart from election results. In March of this year, after a thirteen-year hiatus, these local leaders were finally able to reach agreement following active mediation; based on their recommendation regarding Kirkuk, the CoR then passed a law for Iraq’s provincial elections, including Kirkuk, which are to be held in December 2018. It was significant progress. Yet only two months later these gains are being jeopardised by the controversy surrounding the CoR election results in Kirkuk. If people in Kirkuk have no confidence in the electoral process and its results today, why would they have confidence in the process and outcome of provincial council elections in December or, eventually, of a referendum on the province’s status?

The core of the problem is that Kirkuk’s Arabs and Turkmen suspect that sooner or later a Kurd-dominated provincial council will seek a vote on Kirkuk’s status and attempt to bring the governorate and its oil fields into the Kurdish region; and that this means they may end up living in an independent Kurdish state, an outcome they say they reject. (This is the reason why CoR elections, by contrast, have been able to take place in Kirkuk: similar sensitivities do not exist, because Kirkuk’s Kurdish representatives in the CoR have no such power. The provincial elections law adopted in March was able to include Kirkuk after thirteen years because it stipulates that the new council cannot take decisions on Kirkuk’s status.) The inter-communal mistrust makes an interim power-sharing arrangement, as well as a joint security mechanism, of critical importance in maintaining Kirkuk’s fragile stability.

With confidence severely shaken, progress on these objectives is unlikely if Kirkuk’s CoR election results are allowed to stand without some form of review. If this results in an inability to address the larger question of relations between the federal government in Baghdad and the Kurdistan regional government in Erbil, which is centred on the status of disputed territories and the sharing of oil revenues, then Iraq can expect to remain unstable in perpetuity.

It is imperative that the Iraqi leadership, through IHEC, conduct a recount of the 2018 CoR election results exclusively in Kirkuk governorate.

Leaders in Baghdad and Erbil have indicated to Crisis Group their willingness to return to talks about the disputed territories and revenue sharing once new governments are in place in both capitals. (Kurdish regional elections are scheduled for the end of September.) Moreover, all principal external stakeholders – Iran, the United States, Turkey and the EU – have indicated their interest in an accommodation between Baghdad and Erbil, and a peaceful settlement of the vexatious Kirkuk question in particular.

It is therefore imperative that the Iraqi leadership, through IHEC, conduct a recount of the 2018 CoR election results exclusively in Kirkuk governorate. It is understandable, given the low participation rate nationally, that Iraq’s political parties want to see the national election results ratified as soon as possible, without opening them up for re-examination. But Kirkuk has been a special case in Iraq for a long time, and it should be so again now. The parties should consider the possibility of IHEC ratifying the national results with the exception of Kirkuk for a period of one month, during which IHEC can conduct a transparent recount, or an audit of the counting and tabulation process, in Kirkuk governorate. Kirkuk’s thirteen seats in the CoR will not seriously affect efforts to form a coalition government, a process that is still in its very early stages and can be expected to be prolonged.

The decision now rests with the Independent Judicial Panel. The Panel should factor into its deliberations the deeply contested nature of the Kirkuk results; the damage these results have done in Kirkuk to confidence in the electoral process ahead of much more sensitive provincial elections later this year; and the importance of both the CoR and provincial elections in Kirkuk as critical building blocks of future negotiations between Baghdad and Erbil over power sharing and security management in Kirkuk, as well as, in the end, the administrative status of Kirkuk and other disputed territories.

Iraq and the Kurds: The Brewing Battle over Kirkuk

Oil and Borders: How to Fix Iraq’s Kurdish Crisis