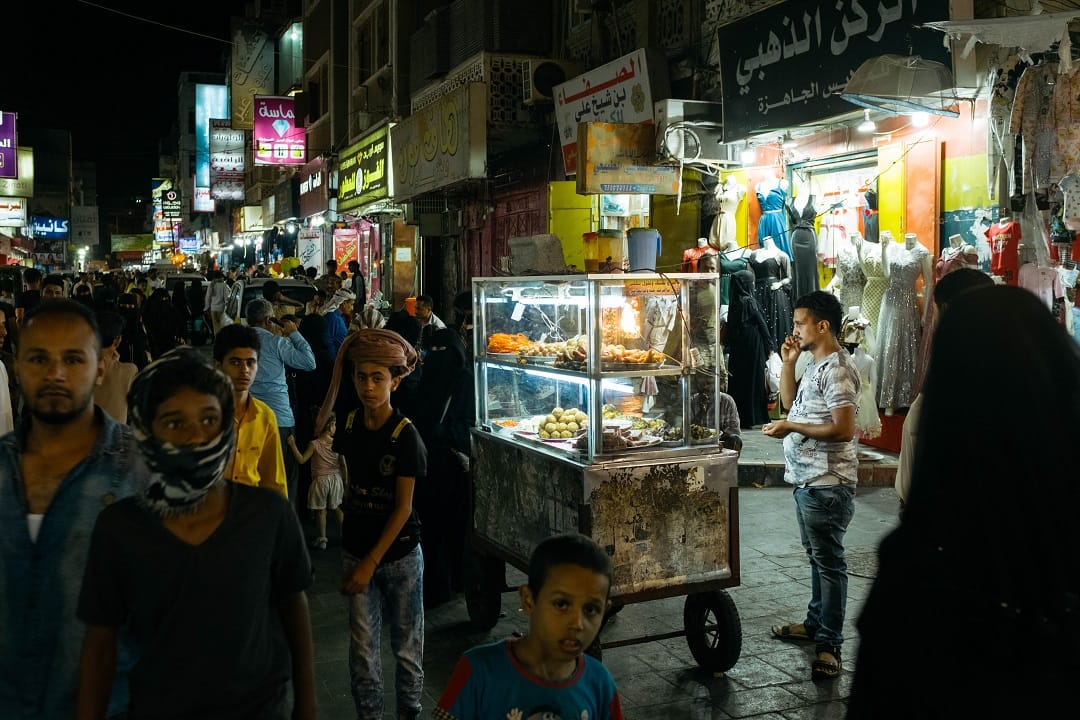 After visiting Aden with a Crisis Group team doing field research and advocacy in Yemen’s interim capital, our Yemen expert Peter Salisbury shares his images of a city struggling to get back on its feet nearly four years after Huthi forces were pushed out.

The battle for Aden was pivotal in the early struggle for Yemen in 2015, when Huthi (aka Ansar Allah) fighters, who were then aligned with forces loyal to former president Ali Abdullah Saleh, reached the southern port city after capturing the capital Sanaa and taking over much of the country’s north. For four months they fought in Aden, a city of more than 1.5 million people, before being pushed back by local forces backed by the United Arab Emirates (UAE), who are part of the Saudi-led coalition.

Aden was reduced to a shadow of its former self by street battles, shelling and airstrikes that wrought havoc on the city’s infrastructure. The Huthis were eventually pushed out of Yemen’s southern governorates, but Aden later suffered from heavy infiltration by al-Qaeda, infighting between rival militias and weak governance.

Returning with a Crisis Group team in March 2019, I found that security had improved markedly since previous trips over the past three years, while there were signs all-around of a rejuvenated local economy. We were told, however, that these recent gains are built on shaky foundations. A truce and improved cooperation between rival UAE- and government of Yemen-backed forces, who fought one another in Aden in January 2018, and a $60m-a-month fuel grant from Saudi Arabia, could both crumble at any moment.

This photo essay shows glimpses of markets springing back to life, families enjoying outings to the seafront and young people visiting a newly reopened mall, complete with a fine bowling alley. They do not represent the totality of life in Aden today. Poverty is still rife and the sound of gunfire remains part of the background noise on at least a weekly basis. But they do show one of the few glimmers of hope Yemen currently has to offer. 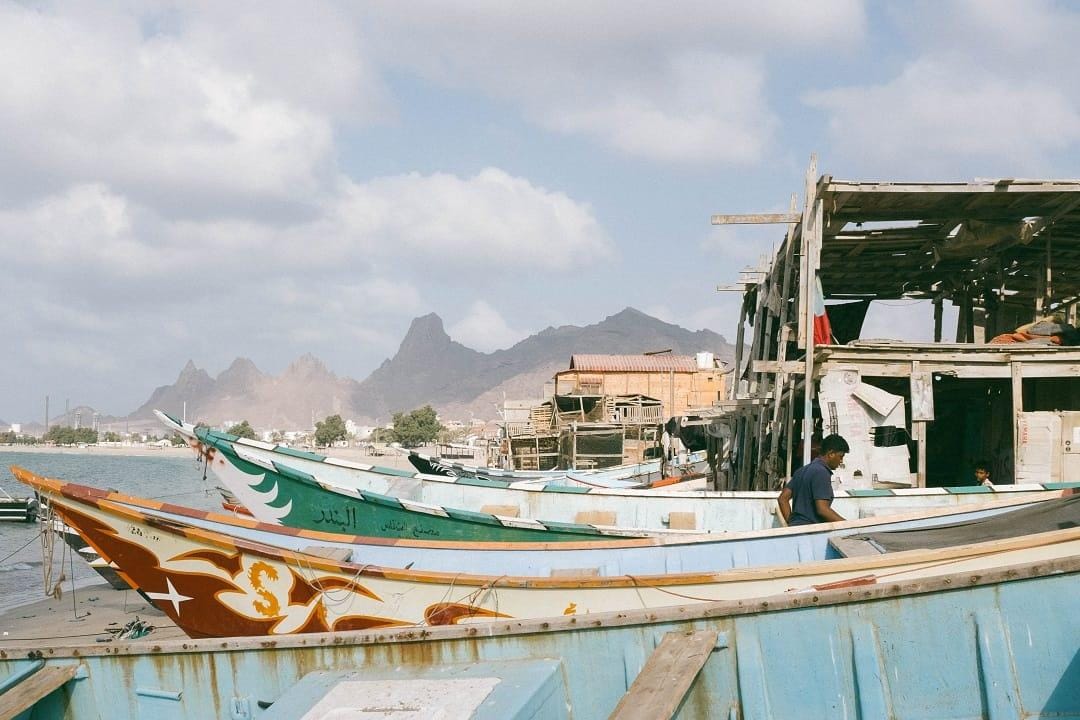 As the economy experiences a fragile recovery, demand for fish has increased and a growing number of skiffs can be seen off the coast. 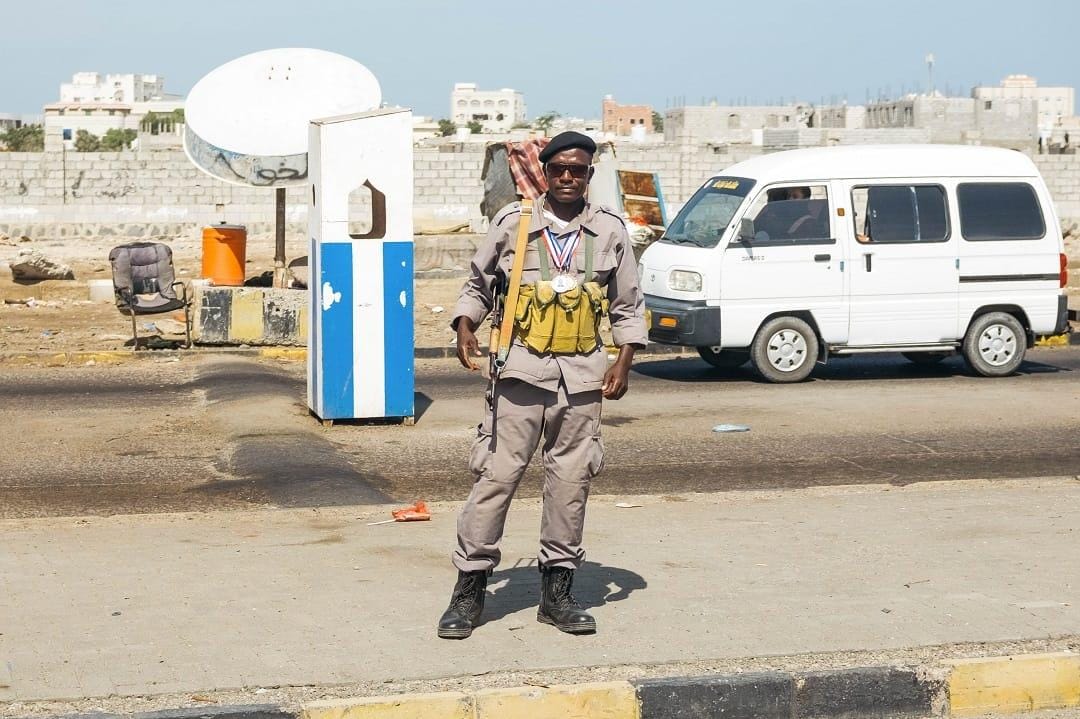 After four years of uncertainty, Adenis are now enjoying improvements in security. This has been driven, in part, by growing cooperation between the Hadi government and UAE-backed local security forces. Rivalry between the two helped drive instability in the past and led to street fighting in January of 2018. The number of checkpoints across the city has fallen dramatically over the past year, and uniformed forces have taken over from the old multitude of militias (although some are still in effect non-state actors). Checkpoints have gone from being a source of fear for drivers to an annoyance or formality. Pictured here is Mohammed Sheikh al-Quaiti, who mans a traffic stop in the Khormaksar district and has even become a popular figure in the city, known for his diligence and sunny disposition. 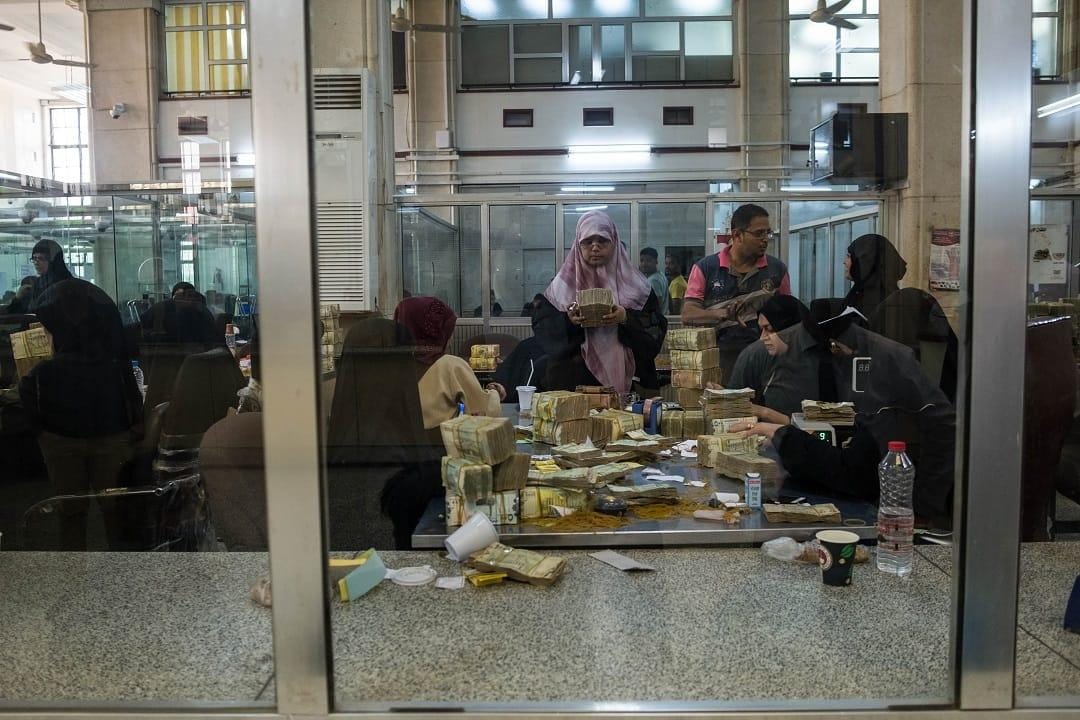 A cashier counts a stack of Yemeni Riyals at the Central Bank of Yemen’s new headquarters in Aden’s Crater district, 20 March 2019. CRISISGROUP/Peter Salisbury

After a series of false starts, the Central Bank of Yemen headquarters, relocated to Aden by the government in 2017, has become an important hub of the improving economic environment in Aden. The Yemeni Riyal hit record lows in September 2018, but its value has since risen significantly to the benefit of all Yemenis.

The World Bank still estimates that inflation hit 55% in 2018, and the cost of living has more than doubled since 2015. Jobs are still scarce, particularly in the Huthi-controlled north west, the country’s largest population center. Adenis are better off than most Yemenis, but large numbers still struggle to get work or enough to eat. More than 10 million people nationwide suffer from extreme levels of hunger. Some 238,000 Yemenis suffer from what the IPC calls “catastrophic hunger”, meaning that they are starving to death. 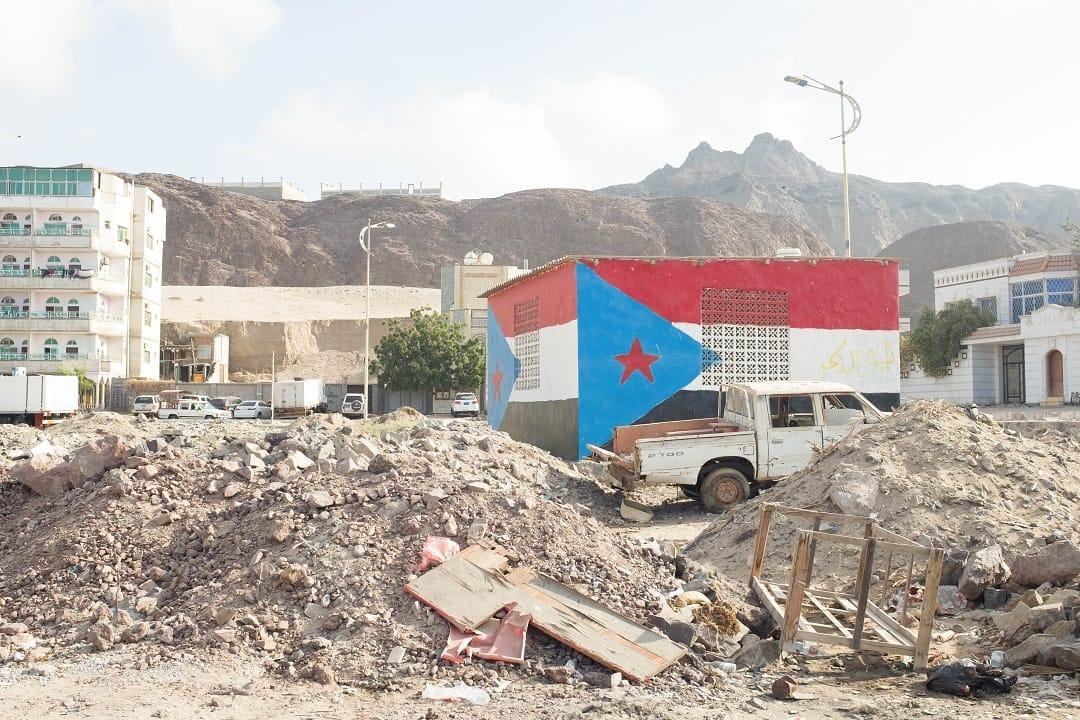 Aden is still littered with bullet-riddled walls, broken buildings and other reminders of the brutal street fighting of 2015. The flag of the pre-1990 independent southern Yemeni state, a symbol of secessionist sentiment, is on prominent display across the city. The international community should not ignore such sentiments in the south, not least among local security services. If a political solution does not adequately account for southern grievances, these could only grow and sow the seeds of renewed conflict. 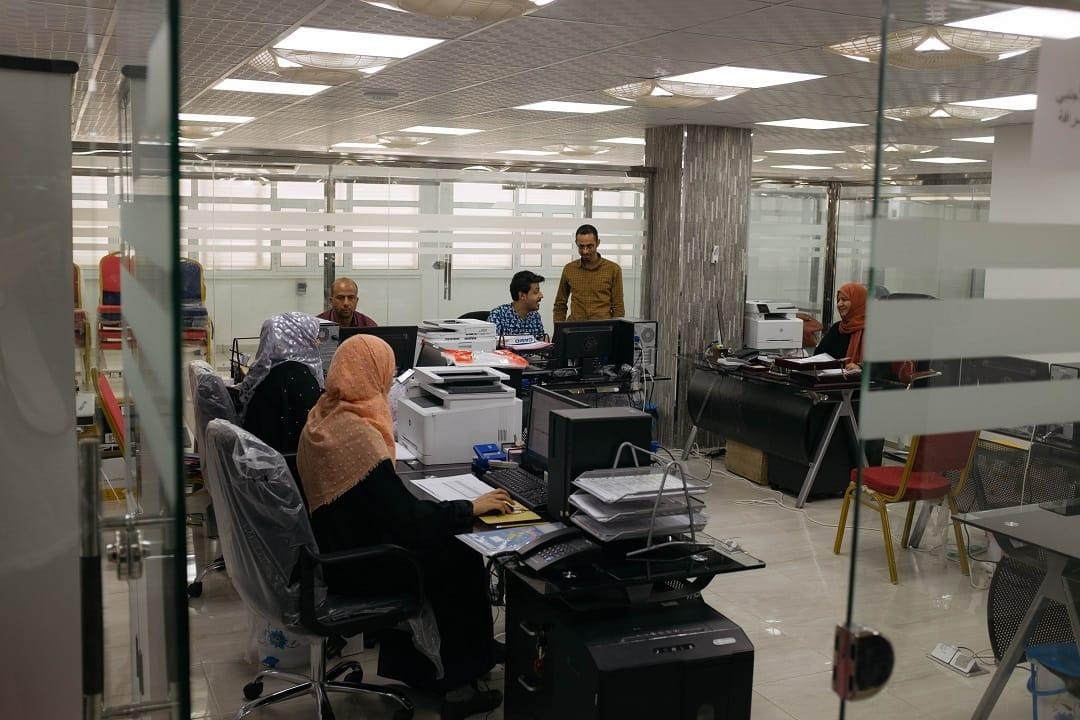 Staff at the newly refurbished offices of the Central Bank of Yemen, 25 March 2019. CRISISGROUP/Peter Salisbury

A number of big Yemeni businesses are returning to Aden, having operated abroad for much of the war. The economy is showing signs of recovery, spurred on by much improved electricity supply, which has been ensured thanks to a $60m-a-month fuel grant from Saudi Arabia since October 2018. But continuation of the grant is not guaranteed, and Aden is heading into the hot summer months when demand for electricity hits a peak as air conditioning and fans become a necessity. 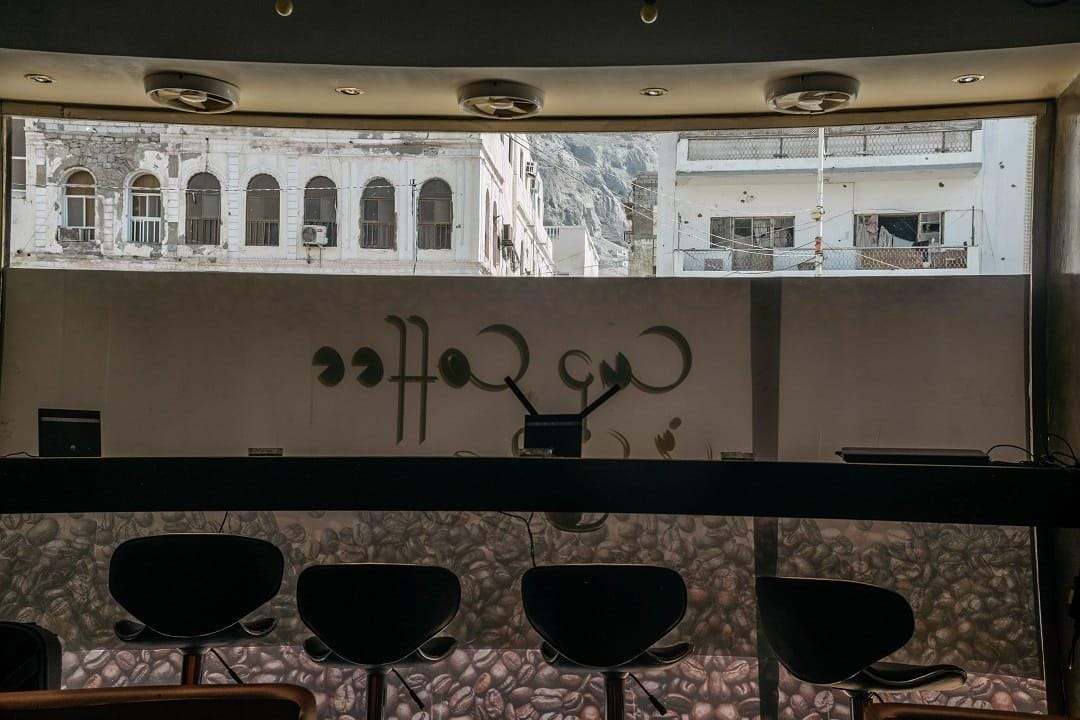 Wealthier Adenis are finding new ways to make use of their disposable income. Local entrepreneurs have opened up new espresso bars, even if customers are sometimes slow to appear. Polished new interiors often contrast with the war scars on the walls of the buildings outside. 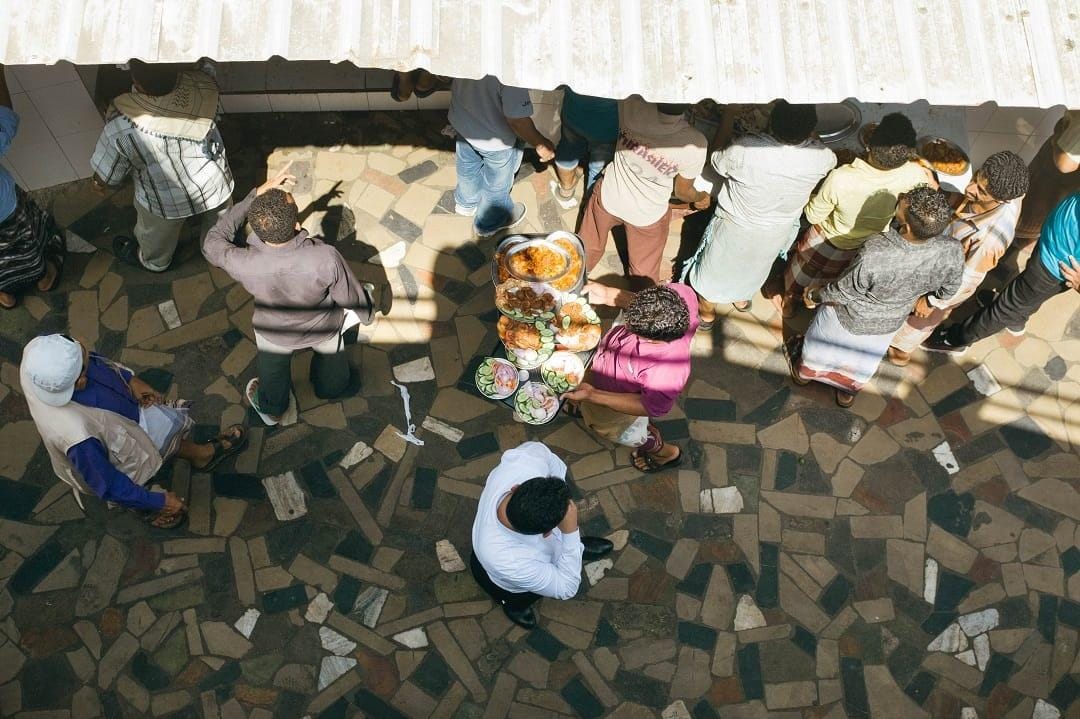 Aden’s restaurants are the busiest they have been in years. Here a waiter carries jamburi (shrimp) and salads to waiting customers at a popular Seera restaurant. 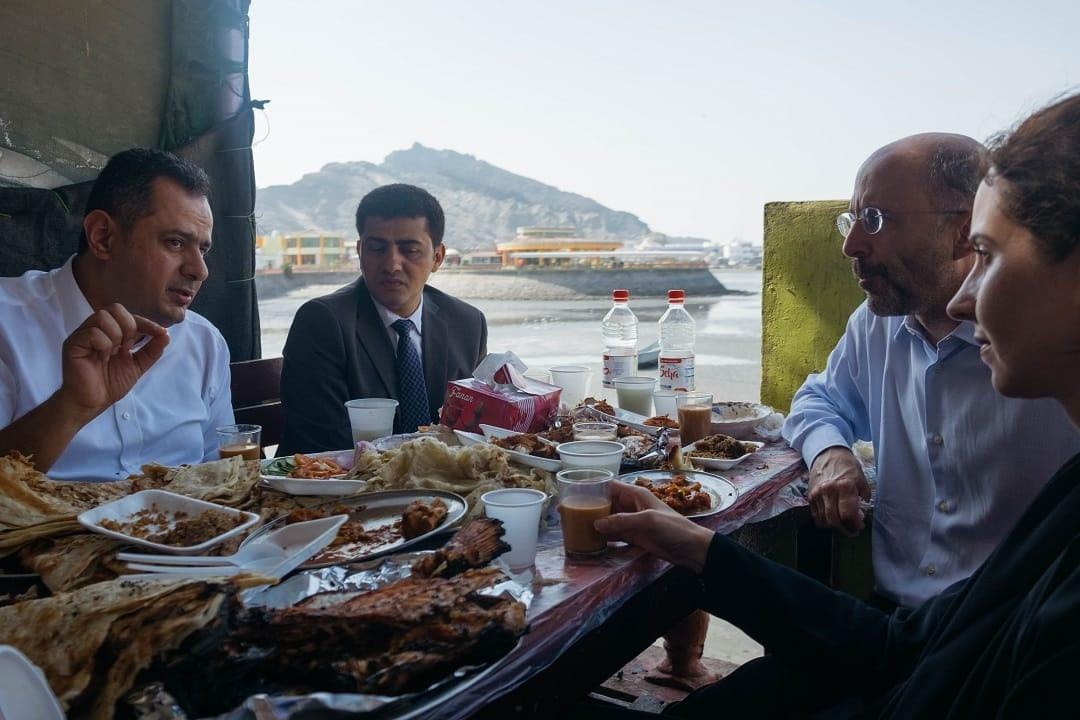 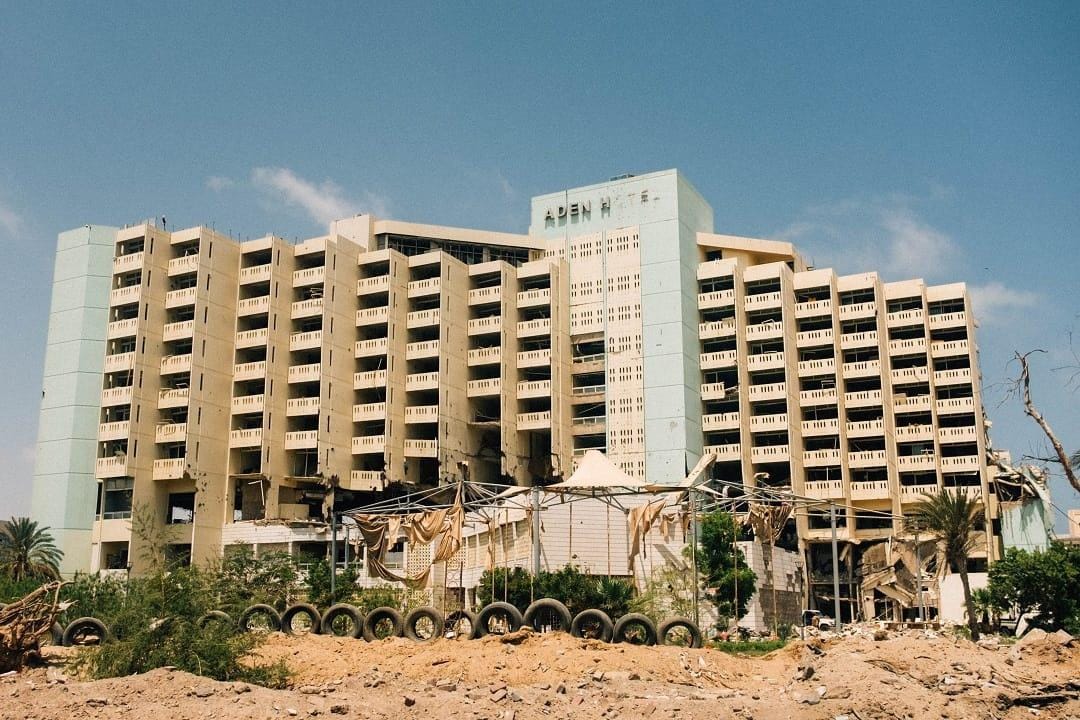 Reconstruction of the city is still at an early stage. The landmark Aden Hotel, once the city’s only 5-star accommodation and notorious as the site in 1992 of one of the first attempted al- Qaeda attacks on a Western target, is still in ruins. 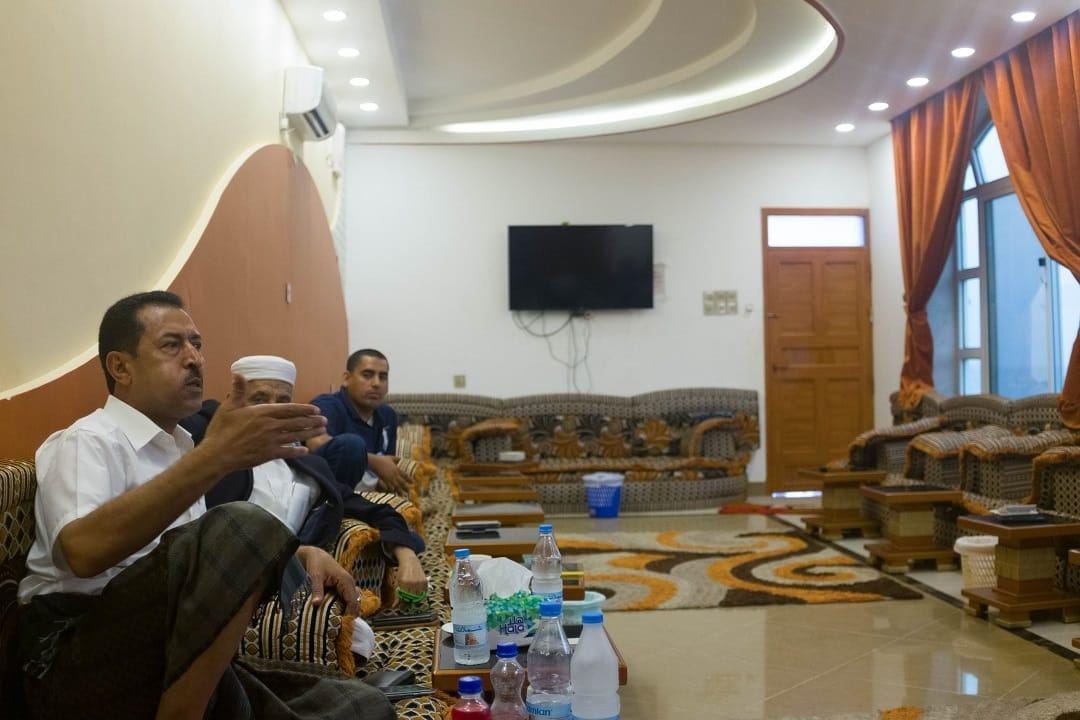 The current recovery is welcome and long overdue, coming as it does almost four years after Huthi-aligned forces were pushed out of Aden. But in afternoon qat chewing sessions (qat is a mildly narcotic leaf), and in other meetings, many interlocutors told us that the uptick is built on shaky foundations. According to some, the more successful the new Prime Minister Abdulmalek is, the more likely it is that attempts will be made to undermine him by one or more factions. Rivals include the Huthis, separatists who see the city as the future capital of an independent south, and even other members of the Hadi government, which has been beset by internal wrangling and power struggles throughout the war. The present local détente between UAE-backed and Hadi government-aligned security and military forces is seen more as a temporary truce than a long-term solution to the “militia-isation” of Aden and the wider south. 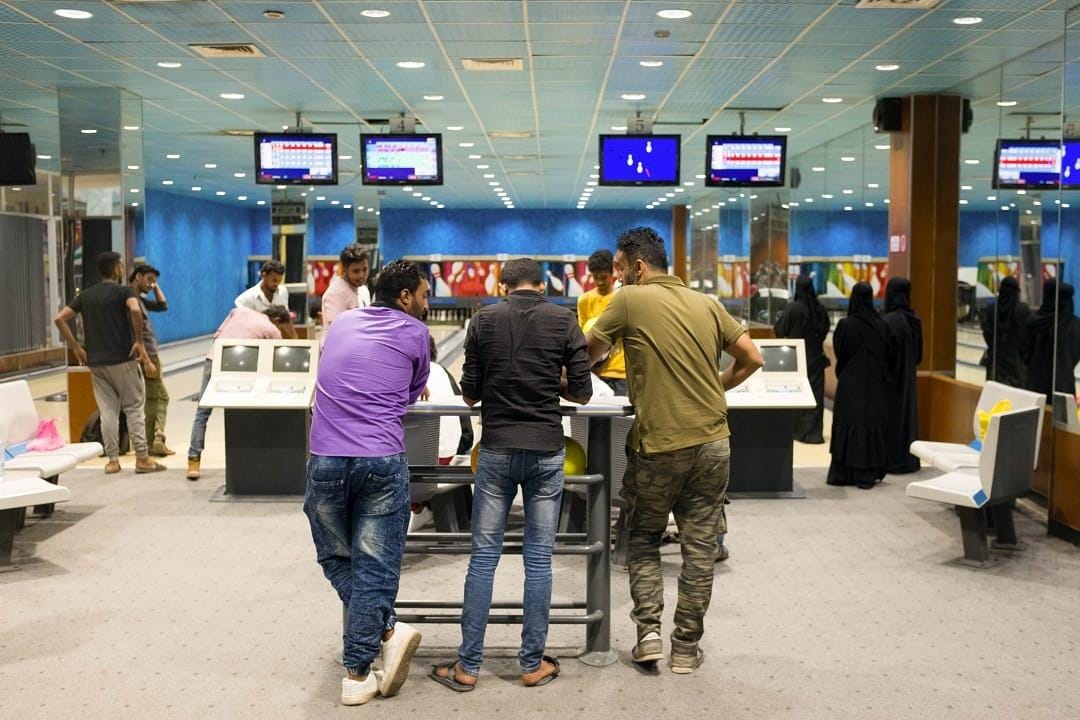 Groups of men and women hang out at the bowling alley of Aden Mall, an upscale shopping center whose owners hoped would help turn the city into an attractive tourism and shopping destination before the war. The mall reopened in January 2019, a reminder of big Yemeni businesses’ ambitions for Aden, once one of the busiest ports in the world but now lagging far behind regional powerhouses like Dubai. Outside of the mall, young Adenis feel a greater freedom to mingle beyond their family circles. As the war recedes, so does the power of conservative religious groups to prevent men and women from mixing in public spaces. Renewed conflict in the city could quickly reverse these gains. 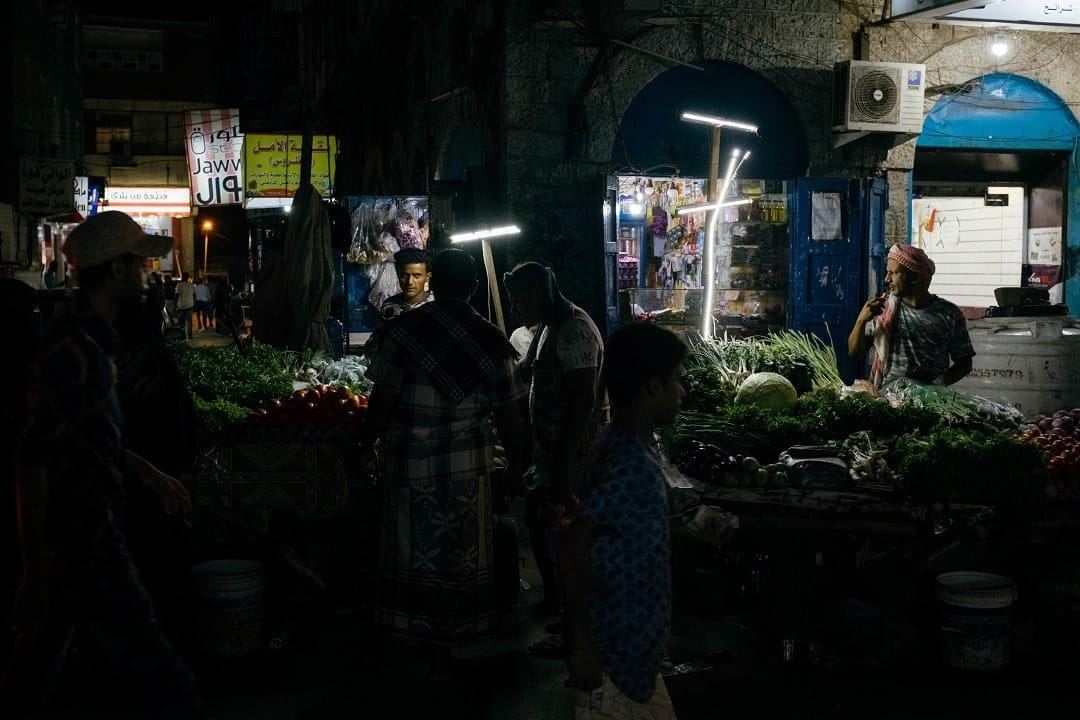 Aden’s old city is once again bustling on weekends. The center of some of the worst street fighting of 2015, Crater – which lies in a bowl formed of volcanic rock – has led Aden’s recovery. 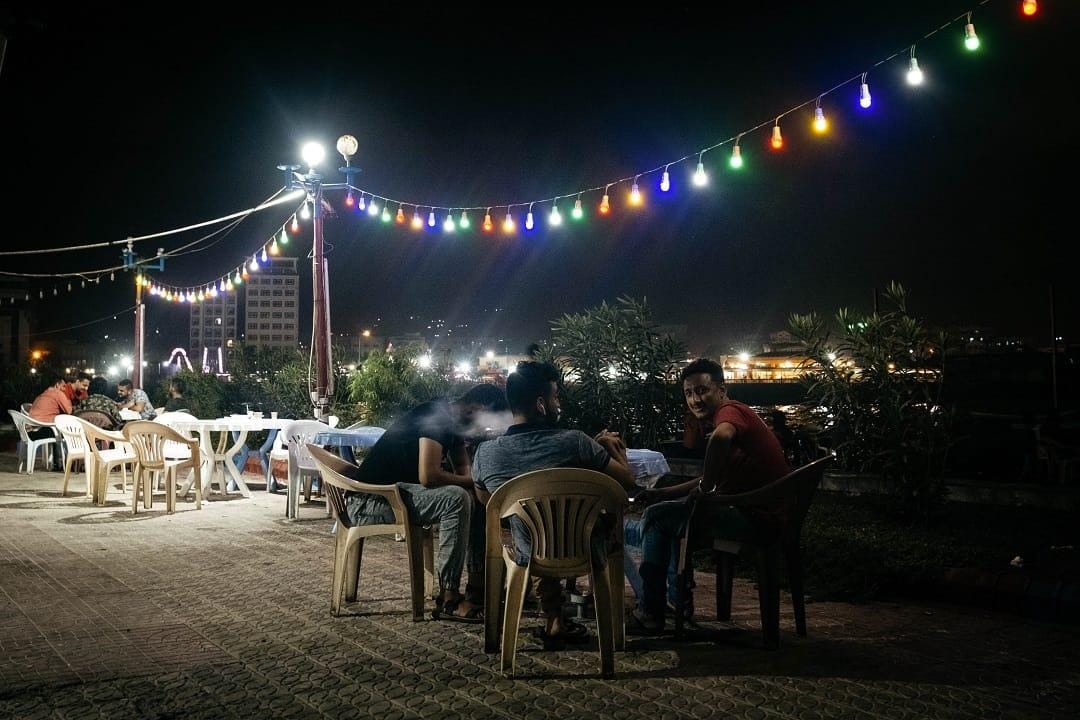 The improvement in security means that families picnic along the seafront, even late into the night. Until recently, fear of clashes between rival armed groups had many Adenis hurry home after dusk. Here a group of men smoke shisha at a seaside restaurant. 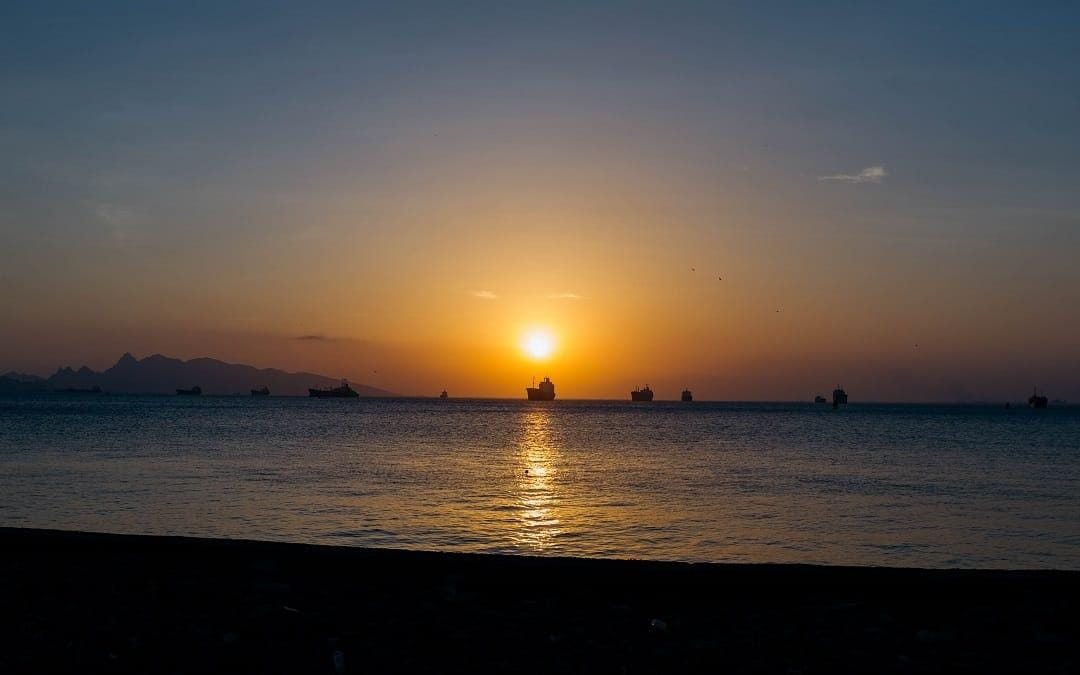 Nearly one third of global shipping passes by the mouth of the nearby Red Sea, which has made Aden a strategic entrepôt for centuries. If the city’s long overdue recovery continues, it could increase confidence among Yemenis in the government’s ability to run the country, possibly putting pressure on the Huthis to reach a political settlement. But backsliding is a real risk. Infighting between rival factions of the kind that shut Aden down for several days in January 2018, it could serve to undermine prospects of a viable peace process.