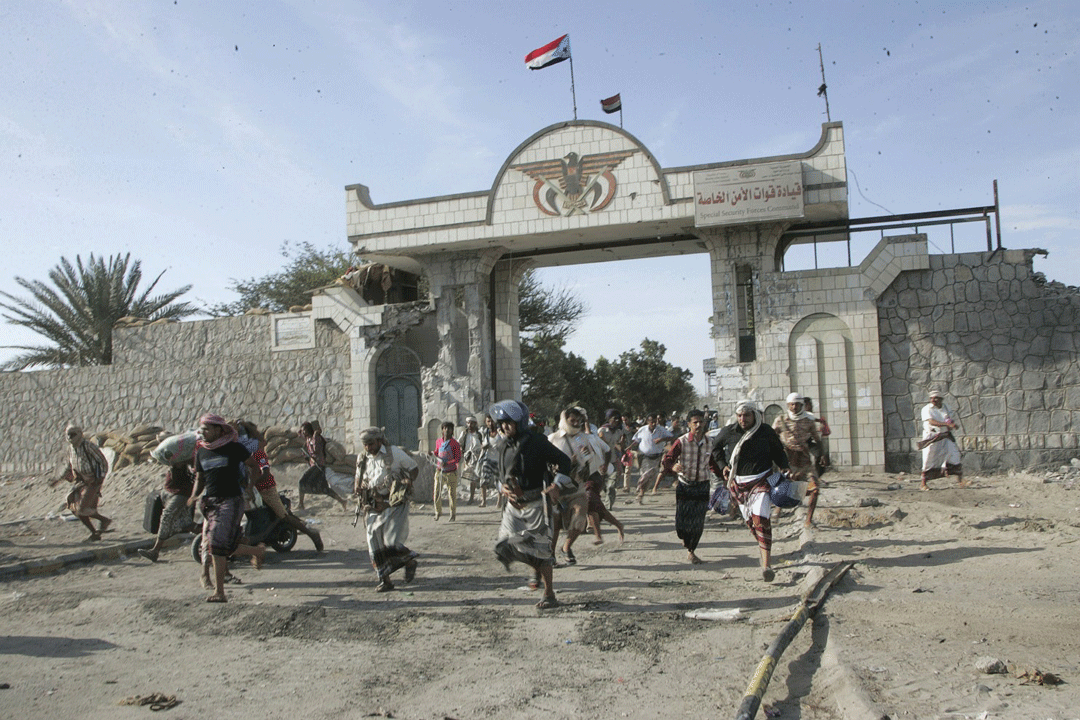 Yemen is now at war. Fuelled by Saudi-Iranian rivalry and a violent jihadi upsurge, fighting is fragmenting the country and could spread beyond if parties do not immediately de-escalate and – with the support of Gulf neighbours – return to negotiations on a compromised, power-sharing leadership.

Yemen is at war. The country is now divided between the Huthi movement, which controls the north and is rapidly advancing south, and the anti-Huthi coalition backed by Western and Gulf Cooperation Council (GCC) allies that President Abdo Robo Mansour Hadi is cobbling together. On 25 March, the Huthis captured a strategic military base north of the port city of Aden and took the defence minister hostage. That evening Saudi Arabia launched a military campaign, in coordination with nine other, mostly Arab states, to stop the Huthi advance and restore his government. Hadi left for Riyadh and will attend an Arab League summit on 28 March. No major party seems truly to want to halt what threatens to become a regional war. The slim chance to salvage a political process requires that regional actors immediately cease military action and help the domestic parties agree on a broadly acceptable president or presidential council. Only then can Yemenis return to the political negotiating table to address other outstanding issues.

The political transition, in trouble for some time, began to unravel in September 2014, when Huthi fighters captured Sanaa, toppling the widely unpopular transitional government. Neither President Hadi nor the Huthis (a predominantly Zaydi/Shiite group, also known as Ansar Allah) honoured the soon concluded peace deal. In January, conflict over a draft constitution led the Huthis to consolidate control in the capital, precipitating the 22 January resignation of the prime minister and president; the latter subsequently fled to Aden.

The Huthi-Hadi divide is the most explosive, but it is not the only conflict. Tensions are also unsettling the recent marriage of convenience between the Huthis and former President Ali Abdullah Saleh, who, after being deposed in 2011, has taken advantage of popular dissatisfaction and tacitly allied himself with the Huthis against their common enemies to stage a political comeback through his party, the General People’s Congress (GPC), and possibly his son, Ahmed Ali Abdullah Saleh. Divisions in the south, which was an independent state prior to its 1990 union with the north, are rampant as well. Southern separatists are internally split and suspicious of Hadi, a southerner who supports continued unity with the north. Then there are al-Qaeda and a nascent Islamic State (IS) movement, both determined to fight the Huthis and take advantage of the state’s collapse to claim territory.

This combustible brew has overwhelmed the UN-led negotiations in Sanaa, a legacy of the 2011 GCC initiative and its implementation mechanisms. Initially, the political process was promising: it removed Saleh and facilitated a ten-month National Dialogue Conference (NDC) that reached constructive conclusions on the political future. But after three years, stakeholders have little confidence UN-sponsored talks alone will overcome the impasse or produce a lasting settlement.

GCC countries have lost faith as well and are increasingly committed to reversing Huthi gains at virtually any cost. Saudi Arabia considers the Huthis Iranian proxies, a stance that pushes them closer to Tehran. Throwing their weight behind Hadi, the Saudis moved their embassy to Aden and reportedly bankroll anti-Huthi tribal mobilisation in the central governorate of Marib and the south. They lead efforts to isolate the Huthis diplomatically, strangle them economically and, now, weaken them militarily. In turn, the Huthis denounce Hadi as illegitimate and offer $100,000 for his capture. They have conducted military exercises on the Saudi border and likely will harden their position in response to Saudi military intervention. They are less dependent on Tehran than Hadi and his allies are on Riyadh, but on today’s trajectory, their relative self-sufficiency will not last long. They are already soliciting Iranian financial and political support.

More than others, the GCC had the financial clout and historical ties with Yemeni stakeholders to incentivise compromise, but it ramped up pressure while pinching off the safety valve. In March, when Hadi asked Riyadh to host GCC-brokered talks, it accepted and set impossible preconditions for the Huthis: to recognise Hadi as president and withdraw all fighters from Sanaa. The Huthis and Saleh’s GPC, which the Saudis partially blame for Huthi advances, refuse to move talks from Sanaa, insisting that the UN continue its mediation there.

Egged on by regional powerhouses Saudi Arabia and Iran, Yemenis may not be able to avoid a prolonged war. If they are to, the GCC should step back from the military path and harmonise diplomatic efforts with the UN, which still has a critical role in facilitating compromise. The UN Security Council ideally would condemn regional military involvement in Yemen and at a minimum should refrain from endorsing and promoting it.

The immediate priority should be a UN Security Council brokered and monitored ceasefire, followed by UN-led peace talks with GCC backing, without preconditions, focusing on the presidency and leaving other power-sharing topics until basic agreement is reached on a single president with one or multiple vice presidents or a presidential council. Agreement on the executive would enable further talk on other aspects of pre-election power sharing in the government and military, and on state structure, particularly the future of the south, where separatist sentiment is strong. Both have been core drivers of conflict since the NDC ended in January 2014.

Without minimum consensus within and beyond its borders, Yemen is headed for protracted violence on multiple fronts. This combination of proxy wars, sectarian violence, state collapse and militia rule has become sadly familiar in the region. Nobody is likely to win such a fight, which will only benefit those who prosper in the chaos of war, such as al-Qaeda and IS. But great human suffering would be certain. An alternative exists, but only if Yemenis and their neighbours choose it.