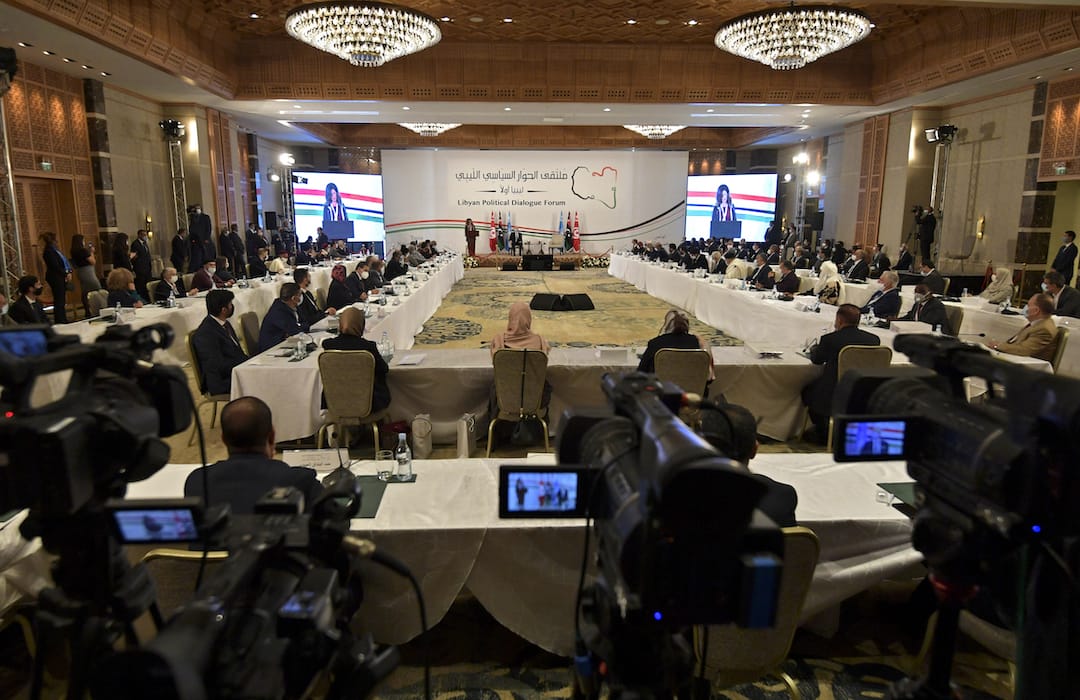 This Briefing Note provides up-to-the-minute analysis of attempts to end Libya’s almost decade-long civil war through talks focused on reunifying the country’s government, oil-based economy and security forces. It is the first in a series of twice-monthly updates.

A fragile ceasefire signed in October is holding in Libya, and thus far renewed conflict has been averted. But tensions remain high, especially as the year is about to end with no substantial progress in political and economic negotiations that were supposed to pave the way for reunifying a country that has been divided in two, with rival governments and parallel financial and military institutions, since 2014. UN-mediated talks to appoint a unity government are faltering, as delegates have so far failed to agree on how to choose candidates for senior positions. A temporary deal on oil revenues in September enabled the resumption of production and exports and helped de-escalate military tensions in central Libya. But that agreement is unravelling, and new and even more serious financial troubles could ensue. As the window of opportunity for political and economic reconciliation appears to be closing, negotiations risk producing an unstable stalemate that could give rise to a new round of violence.

Political Talks Come to a Halt

More than a month has passed since the UN convened the Libyan Political Dialogue Forum, a gathering of 75 delegates comprising representatives of the country’s two rival assemblies and some UN-handpicked independents. The event was a positive step, aimed at forging consensus behind a new interim unity government and a roadmap to parliamentary and presidential elections. The forum set a date for those elections – December 2021 – and reached agreement on the need for a single three-person Presidency Council and a separately appointed prime minister. These are to replace the Presidency Council of the Tripoli-based Government of National Accord and Prime Minister Faiez Serraj, who is also the council’s head. But that is about as far as the forum went. It was unable to reach agreement on the process by which the 75 delegates would vote for candidates for these open positions.

A first round of in-person talks in Tunis between 9 and 15 November started on the right foot, producing a consensus document entitled “The Preparatory Phase for a Comprehensive Solution”. In the following two weeks, however, meetings – which moved online – got stuck on the question of what voting mechanism the forum should adopt to elect the Presidency Council members and prime minister. Delegates proposed twelve different options, which can be placed into three broad categories.

[The forum] was unable to reach agreement on the process by which the 75 delegates would vote for candidates for these open positions.

The first set of proposals, which appears to enjoy most support among forum participants, suggested splitting the delegates into three regional constituencies (eastern, western and southern Libya) and tasking each group with choosing its representative on the Presidency Council. The selection of the prime minister would be the whole forum’s remit, with two main permutations: one would have regional blocs vote on their preferred candidate first and open the vote to the plenary only at a final stage; the other would have the selection open to the plenary from the outset.

A second set of ideas proposed that forum members be divided along the lines of Libya’s thirteen electoral districts, with each being charged with selecting one candidate for the Presidency Council and then opening up the final vote to all delegates. Under these proposals, members of each electoral district would also be tasked with endorsing a candidate for prime minister from their district, leaving selection of the final winning candidate to a plenary vote.

The third set of options proposed a plenary vote on pre-constituted lists for the three Presidency Council members and the prime minister, each of which at least fifteen forum members would need to endorse before it could be put to a vote. All the proposals provided different mechanisms for determining which person from the three-member Presidency Council should take the title of president and for ensuring that the president and prime minister hail from different regions.

The lack of consensus behind any of the above options illustrates the difficulties in moving this process forward. Moreover, spoilers appear to be lurking within the forum, keen to sabotage the appointment of a new executive body for different reasons: some  want Serraj to remain in place, because they benefit from the status quo; others believe that the appointment of a new interim government will delay, perhaps indefinitely, the elections scheduled for the end of 2021. As acting UN Special Representative Stephanie Williams, the forum’s chief architect, is due to leave her post at the end of December, the window of opportunity to select a new government could close with her departure, unless her successor opts to give the process another chance, which is far from assured. The failure of political talks could well give rise to a blame game between rival factions and perhaps jeopardise the fragile ceasefire.

Optimism is also fading about Libya’s surprisingly rapid resumption of oil production since the September deal. Output reached 1.3 million barrels per day in early December. Fears are growing, however, that production could shut down again by the end of the year, should a dispute over the management of oil revenues remain unresolved.

The dispute centres on the controversial oil sales payment procedures that the Tripoli-based government and Libya’s state-owned National Oil Corporation put in place in September as part of the deal. These U.S.- and UN-backed arrangements, which became public only in recent weeks, aimed to end a countrywide oil sector blockade that Field Marshal Khalifa Haftar, head of the military coalition that in 2019 launched a war against the Tripoli-based government, had enforced since January 2020. Pursuant to this deal, the Tripoli government and National Oil Corporation modified how oil revenues are managed, deviating from the standard procedure under Muammar Qadhafi’s regime, by which international oil companies made payments to the Libyan Foreign Bank, which transferred the money automatically into the Central Bank of Libya’s coffers. Instead, the National Oil Corporation now is supposed to order export receipts to be kept “temporarily” in its own account with the Libyan Foreign Bank, pending formation of a new unity government and reunification of the Central Bank, divided since 2015 into an internationally recognised one in Tripoli and a parallel but not internationally recognised branch in the east allied with Tripoli’s rivals. Short of progress on these points, the money is supposed to accumulate untouched in the National Oil Corporation’s account. The deal was a concession to the Haftar camp and its foreign backers, who accused the Tripoli-based Central Bank of misusing public funds.

The new mechanism is controversial for a number of reasons. First, there is no presidential decree or legal document authorising the National Oil Corporation to change the payment mechanism. Secondly, this mechanism was meant to expire after 120 days, meaning at the end of December. But without substantial progress in political negotiations to form a new government or reunify the Central Bank, it is unclear whether the arrangement will be scrapped and the previous payment mechanism restored at the end of the year. The Central Bank in Tripoli wants the old mechanism back, but taking that step could trigger a new oil blockade by Haftar’s forces. Alternatively, the current payment arrangement could remain in place, as the National Oil Corporation prefers, as a way of ensuring uninterrupted oil production. But that would raise the problem of how, in the absence of revenues accruing to it, the Central Bank would cover its mandatory budget payments. In a third, more auspicious, scenario, the payment mechanism could be modified through a new compromise, but as yet no one has put forward a concrete proposal.

This conflict over oil revenues is set against the background of a dispute over control of the Libyan Foreign Bank, the country’s main offshore commercial and investment bank entirely owned by the Central Bank, which has no director at present. An internal feud over the bank’s leadership has been raging for years, but in November it entered a more dangerous phase when the bank’s former director, the Central Bank and the Tripoli government each claimed the right to head the bank. The impasse raises the prospect that international monetary institutions could terminate or restrict all business relations with this bank in a procedure known as “de-risking”. Such a move could have devastating consequences for Libya’s financial sector, since this institution is key to managing both Libya’s oil revenues and its import-export system.

Settling the feud over control of the Libyan Foreign Bank is urgent, as is finding a compromise on how to manage Libya’s oil revenues. To achieve the latter, the two sides will need to reach a new agreement – one that strikes a balance between, on one hand, providing Haftar and his foreign backers with guarantees that incoming oil sales revenues are safeguarded, and, on the other, tapping oil revenues now to cover public expenditures throughout Libya.

Settling the feud over control of the Libyan Foreign Bank is urgent, as is finding a compromise on how to manage Libya’s oil revenues.

U.S. officials, who were the main brokers of the September deal, should help draft the contours of such an agreement in consultation with the U.S. Treasury Department and relevant foreign governments. The alternative would be either a new oil sector blockade or an escalation of the financial disputes. Both would worsen ordinary Libyans’ already dire living conditions and could trigger renewed fighting in oil-rich areas.

Fleshing Out the Libya Ceasefire Agreement