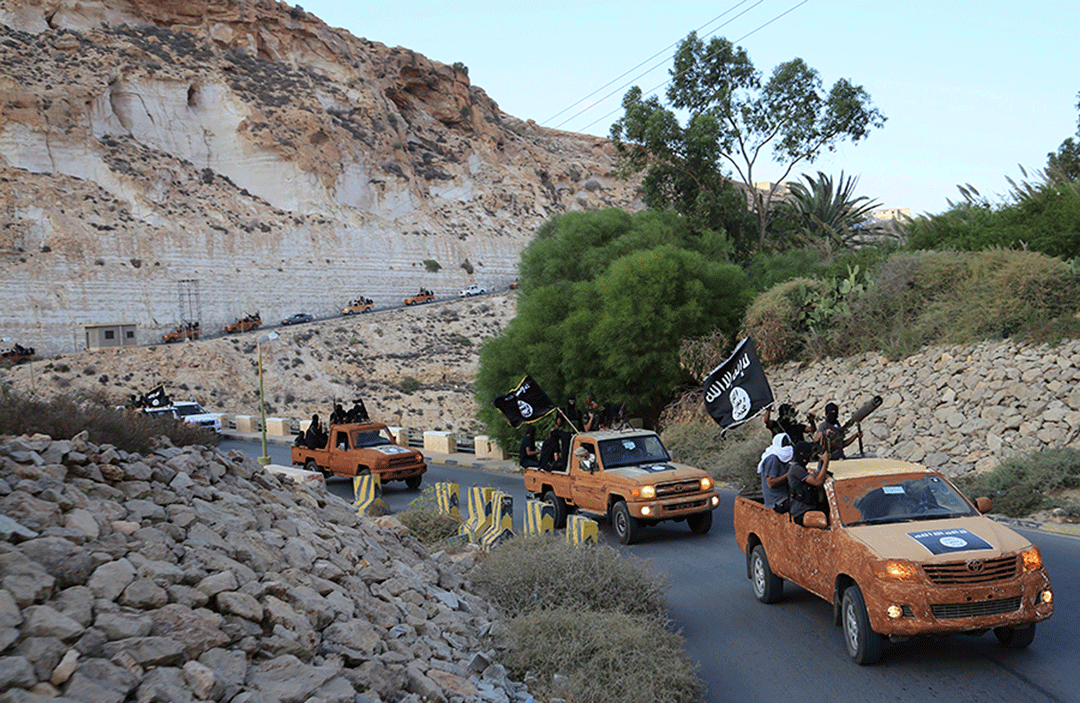 More weapons are not the answer to Libya’s jihadi upsurge

After the Islamic State (IS) beheaded 21 Egyptian Christians in Libya, and Egypt bombed IS camps in response, it seems clear that there is an IS problem in Libya that didn’t exist before. How did Libya get from the joy of overthrowing former Libyan Leader Muammar Qadhafi to the current state of chaos?

Libyan cities like Derna and Ajdabiya, and to a certain extent Benghazi, have a history of jihadi activity. Since the early 1990s we have seen fighters from these places joining wars in Afghanistan, in Iraq and in Syria. So the arrival of IS on Libyan shores doesn’t come out of the blue. What has changed is that, with politics being conducted through armed groups confronting each other on the battlefield, and deeply split over their vision for the country, radical groups are strengthening and winning greater freedom to operate. There is a risk, however, in associating any particular radical or jihadi group with IS. One group in Sirte and another group in Derna have pledged allegiance to IS, but it’s never clear what the command and control structure is, or whether these are local groups that are repositioning themselves as IS franchise because they feel that they can have greater visibility that way.

How does this new jihadi trend relate to a Libya that has two rival parliaments, each one claiming sole legitimacy, and each one with its own allied militias fighting against the other’s forces?

The political divisions in Libya, and resulting military clashes between armed groups allied to the two governments and two parliaments, have facilitated the growth of jihadi armed groups. The two main sides have reached out to any possible allies they can find. The so-called “Libya Dawn” coalition, which broadly supports the Tripoli-based camp and is composed of armed groups from Tripoli, western Libya at large and Misrata, has relied very much on the fire power of militant Islamist groups like Ansar al-Sharia in Benghazi. This is an alliance of convenience, and members of “Libya Dawn” admit that it is an uncomfortable alliance, but they feel it is a necessity because they fight a common enemy. The common enemy is the internationally recognised Tobruk-based government and, more specifically, the general appointed by the Tobruk parliament to lead its military forces, General Khalifa Haftar. So the jihadis are benefiting from the logic of “my enemy’s enemy is my friend”.

Don’t people see General Haftar as a kind of saviour from those radical groups? At least that’s what he claims is his mission.

Undoubtedly, since he burst onto the Libyan scene in early 2014, General Haftar has posed as the answer to a growing sense of desperation among the residents of Benghazi. In the past two years, the city has witnessed the killing of more than 500 civil society activists, lawyers and ex-military officers. So people in Benghazi welcomed General Haftar’s call for a more forceful response against radical groups. However, his “Operation Dignity’’ ended up targeting individuals and armed groups that had taken part in the revolution against Qadhafi, or were simply part of the broader Islamist camp, not only radicals. These groups have always claimed that they had nothing to do with the assassinations. This has created animosity and broadened the coalition of those who oppose General Haftar.

What is the relationship between Tripoli’s General National Congress (GNC) and the radical elements associated with them in Derna and other places?

The nature of the relationship is really not clear. We know there are Islamist politicians within the GNC – members of the Muslim Brotherhood, and also individuals with jihadi backgrounds or direct links with jihadi groups. Yet the extent to which there are direct ties between the GNC and more radical groups remains unclear. The GNC faction in Tripoli is firmly opposed to the authority of the Tobruk Parliament and to the forces headed by General Haftar in eastern Libya. So Tripoli is at least morally backing jihadi groups in the east, like those in Derna. It is not clear whether this takes the form of arms and funding, but it is still support.

Does this mean that the Tripoli GNC faction is associated with these same Islamic State-linked groups?

The international community does see and fear this link, and Libyan groups that do not recognise any legitimacy in the GNC’s claim of authority certainly voice these concerns. But let’s be clear that even though certain GNC members might support such actions or entertain direct or indirect ties with these groups, this doesn’t mean the entirety of the GNC camp does. We don’t know that. There has certainly been a very uncomfortable ambiguity expressed, for example, by the prime minister of the pro-GNC government in Tripoli, Omar al-Hasi, who has avoided public condemnation of the attack in Al-Qubbah and he has made unsubstantiated remarks suggesting that the news of the beheadings of the Egyptians were a fabrication. These are very problematic statements that make the international community and Libyans themselves believe there is an intentional cover-up on the Tripoli-GNC side.

Egypt, in response to the killing of its citizens in Libya, is calling for the UN to lift the arms embargo. This would allow someone like General Haftar to receive more and better weapons. It also wants the international community to back the Haftar militia and Tobruk parliament against Tripoli. Is that a good strategy?

It would be a very dangerous gamble to loosen or lift the arms embargo in order to help the internationally recognised government in Tobruk against the Tripoli authorities. Libya doesn’t need any more weapons. What it does need today is political dialogue, and a push to create common ground between the various factions, both military and political. By requesting an end to the arms embargo, Egypt and those Libyan leaders who back such a request could actually deepen Libya’s woes.

First of all, General Haftar and his allies might well use any new weapons to pursue fights with more rivals than just IS; they often identify their political opponents as terrorists. Secondly, General Haftar’s military group may be allied to the authorities in Tobruk, but it is actually a fragmented military force. Rivalries between commanders mean it is likely that they will disagree on what happens with any new weapons, and could use them against each other. We’ve also seen several instances of General Haftar’s allies’ weapon depots being stormed and captured by rivals, including by Islamist militants. So there is no certainty that these weapons, if delivered, would actually remain in the hands of the army that Egypt is asking to support. Finally the military forces on the ground, one allied with the Tobruk parliament and one allied with Tripoli, are fairly equally balanced. There is no assurance that delivering arms to one camp would ensure its victory over the other.

So what is the alternative right now?

The international community must unite to persuade Libyan factions to make a political deal. Only by bringing the main groups together can there be a unified fight against radical groups. Any attempt to push for a military solution, like providing weapons to the Tobruk authorities and their military allies, would actually undermine the UN, U.S. and European countries’ efforts to pressure the various groups to compromise.

Egypt has intervened in Libya, not only against IS but also in favour of one camp. Are there other regional actors who see things differently, who support the Tripoli version of events rather than the Tobruk one?

Yes, Egypt is not alone in supporting the Tobruk camp. They are joined by the United Arab Emirates and to a certain degree Saudi Arabia. Conversely, the Tripoli authorities in the other camp have international backers like Turkey and Qatar, and, to a certain degree, Sudan. But you also have neutral regional actors that are trying to find a midway in the current divide. This is a very healthy, responsible position to take, epitomised by countries like Algeria and Tunisia.

How close to a breakthrough are the Libya talks led by the UN Secretary-General’s Special Envoy, Bernardino León?

Since early January, the UN Special Envoy has been trying to bridge Libya’s major institutional divides. He has been trying to bring together, in Geneva and elsewhere, various factions that are allied with the two rival camps – the House of Representatives (HoR) in Tobruk and the former General National Congress (GNC) in Tripoli – and have them agree on a new national unity government. Tobruk’s HoR and Tripoli’s GNC have variously threatened to pull out of the meetings or argued about whether or not the talks should be outside of the country, what the agenda should be, and who should represent them. Still, as of now, we have a UN-led process in which many Libyan politicians agree on one fundamental objective: the need to work together on coming out of the crisis. But they still haven’t agreed on the shape of the national unity government.

What can the international community do to improve León’s chances of bridging Libya’s deep divides?

For León to be successful, there needs to be a clear signal from the international community that it will not support the military strategy that Egypt and Tobruk’s internationally recognised government have requested be adopted by the UN Security Council. The international community must stand firm against the delivery of weapons to any of the factions in Libya. There are factions in both Tobruk and Tripoli that still believe that victory is possible by military means, and the world needs to show them that they are wrong. It is also important that the international community make greater efforts to ensure that Libya’s financial institutions remain neutral. Both Tobruk and Tripoli must accept the idea that the only way out of the Libyan crisis is to negotiate a national unity government.