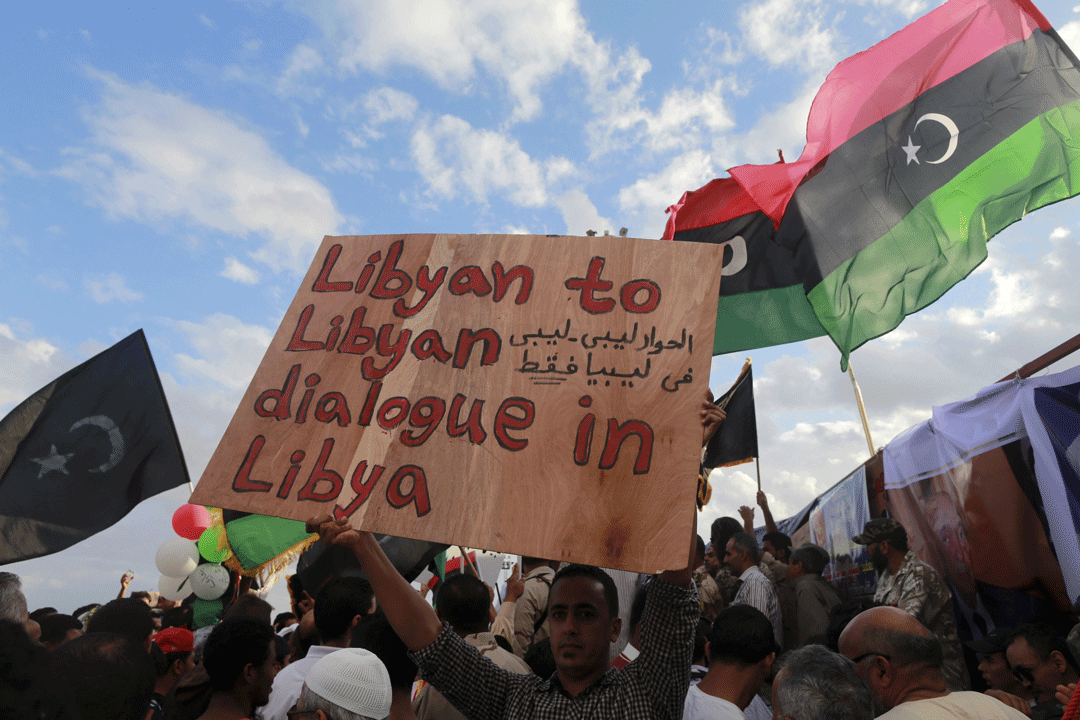 What Could Possibly Go Wrong in Libya?

Representatives of Libya’s rival parliaments gathered in the Moroccan resort town of Skhirat on Thursday 17 December to sign a UN-brokered agreement that supporters believe is one important step towards ending the civil war that has raged for more than a year. A number of Libyan politicians and local officials attending the ceremony cheered and celebrated the event as a possible new beginning. Meanwhile, fighting in Tripoli and a number of other Libyan cities continued.

Under the terms of the signed agreement, Libya will have a new government of national unity headed by Prime Minister Faez Serraj; lawmakers from the rival parliaments who support the UN-backed agreement will remain in office under a new power-sharing framework. This arrangement, envisioned to last one year, is supposed to end the divide between two competing sets of governments, parliaments and military coalitions that have split the country since August 2014. The deal was pushed energetically by Western governments – especially the US, U.K., France, and Italy – seeking a single partner to fight both the Islamic State and people smugglers.

On paper, this is fantastic news. In practice, the uncertain level of support for the agreement in Libya, the fact that the leaderships of both existing parliaments oppose it (and are busily devising their own peace plan), and the fact that the new government will have little control over key parts of the country, have left many Libyans worried that the peace deal might actually make things worse.

Any number of things could go wrong. Here are the top five pitfalls to watch out for:

1. Libya could end up with three governments and four parliaments.

Since July 2014, the country has had two parliaments and two governments: the internationally recognised House of Representatives (HoR) based in the eastern city of Tobruk with its government located in another eastern city called Bayda; and the Islamist-backed General National Congress (GNC) and its own government, both based in Tripoli. Significant elements of these two institutions reject the agreement, and they will be in no hurry to dissolve themselves to make way for the new legislature envisioned in the UN-backed agreement. Moreover, the deal envisages extending the mandate of the HoR and the creation of a new State Council to accommodate GNC members who accept the agreement. You do the math: old HoR, new HoR, old GNC, and new State Council adds up to four, plus the two existing governments and the new “unity” one.

To prevent this scenario, the UN should make every effort to open the doors of the new institutions to more members of the old ones, encourage them to join, and refrain from sanctioning those who support a unity government in principle but insist on changes to the proposed government’s lineup and structure.

2. The new government will not be able to take its seat in the capital.

A government not based in Tripoli will govern in name only. It would not be able to effectively control key state institutions, such as the Central Bank of Libya. The way it looks now, the UN-sponsored government will lack the military support it would need to take Tripoli from the mostly anti-deal militias entrenched there, and a battle over the capital could become protracted. The UN should redouble efforts to devise a Tripoli security plan to protect any government and international diplomatic presence. That will mean working out an arrangement with other Tripoli-based armed groups, including Islamist ones, that would safeguard their core interests.

There is also a risk that the Libyan Supreme Court could declare the new agreement illegitimate. Since there was no vote in the two parliaments endorsing the agreement, opponents of the deal are already filing cases to have the country’s top court declare it (and the government) null and void. This would mean further legal conundrums for already embattled state institutions. Meanwhile, the heads of the two rival Libyan parliaments are trying to establish a unity government of their own. If they succeed, they may enjoy greater local legitimacy than a unity government that is seen to have been imposed by Western powers. Ironically, if the rival legislatures do reach an agreement on their own, the government they pick will have greater chances of taking office in Tripoli than the internationally recognised one. To render the question moot, the leaderships of the two parliaments should both be persuaded to approve the deal, and the unity government be seated firmly in Tripoli.

3. Intra-regional and political divides will deepen.

Misrata, a critical trading hub on the Mediterranean, is the proposed unity government’s most powerful backer and the West’s principal ally in the expected fight against the Islamic State (IS) in nearby Sirte. Western officials are counting on Misrata’s pro-deal militias to help defeat IS in Sirte, a fight that gained urgency after the 13 November Paris attacks. However, Misratan forces control merely the city’s western approach. Retaking Sirte will require forces coming from the east and south too, as well as a plan for who takes charge in the aftermath of battle. Moreover, putting all of one’s eggs in the Misratan basket risks aggravating Libya’s deep geographic and political divides. Many Libyans, especially among the rural Arab tribes in the east, view with contempt the Misratans, active traders and largely descendants from Ottoman Turks, who they fear will try to control the Bedouin hinterland.

Secessionist tendencies are likely to grow in the east. Those who champion greater autonomy for Cyrenaica, Libya’s eastern province, feel underrepresented in the unity government and therefore do not support it. These federalists dominate the old HoR and control key oil infrastructure in the east. Misratans could help assuage their compatriots’ fears by championing a more inclusive unity government. There are two seats left on the Presidency Council that are reserved for easterners, but picking the right people for the job without upsetting the region’s delicate tribal balance will be tricky. Yet failure to include adequate representation from the east will ensure that the centrifugal forces already set in motion will spin outward with increased vigor.

4. The country’s divides will take on a theological dimension.

Influential Islamist preachers are already painting the new government as religiously illegitimate because, they say, it was appointed by non-Muslims (ie, the West). The jump from this to accusing it of being a kafr (apostate) government is all too easy, and this could become an opposition rallying cry that will appeal to many ordinary, conservative Muslim Libyans, not just radicals, particularly in light of Libya’s brutal colonial past. This is why the incoming government’s lineup should not be announced by the UN envoy, as it was in October, but by Libyan negotiators themselves.

5. Libya will slide toward economic collapse.

If the unity government cannot control the Central Bank of Libya – either because it is not based in the capital or is ruled illegitimate by the Supreme Court – it might be tempted to request the international community to seize Libya’s assets abroad to ensure it has access to them. Many Libyans will see this as an unacceptable loss of sovereignty, if not outright theft. Rival factions are also competing for control over the National Oil Company and the Libyan Investment Authority. Together, these three pillar institutions control up to $130 billion of assets and hold the technocratic expertise critical to rebuilding the Libyan state.

The UN has made important headway in the past year to bring Libyans of different political stripes together in one tent to sign a deal, create a unity government, and put an end to conflicts that are threatening to break up the country beyond repair. Such an effort requires time and, perhaps most importantly, it must be owned by Libyans themselves if it is to survive. Rushing an agreement was never a good idea, but it is not too late to encourage a broader array of Libyans to join that tent in the coming weeks. Libyans should be seen as leading the peace process for it to succeed, and not have a done deal foisted upon them.