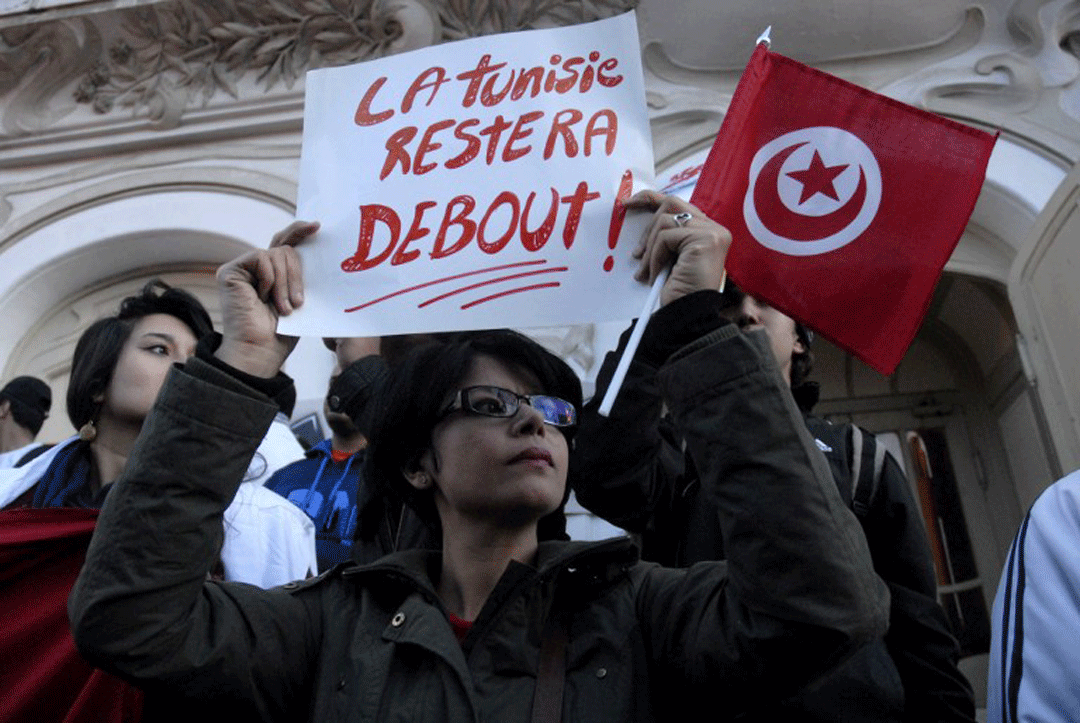 Crisis Group: Tunisia is often presented as an exception in the region, a point of hope for balanced progress and democratisation after its early role in the 2011 Arab Revolutions. Should the Bardo attack fundamentally change views of Tunisia’s positive potential?

Michaël Béchir Ayari: No. For now, Tunisia remains open for business and its political transition remains hopeful. It’s true that the museum should have been better guarded, but the police came quickly and finished their mission in three hours. They are seen as having done a good job, in the end. Thus far, political responses to the attack have proved the resilience of Tunisia’s achievement – reflected in the compromise last year between Islamist and anti-Islamist factions on forming the new government.

But the important test is now. This attack has thrown into sharper relief the gap between Tunisia as an example of successful compromise, and the fact that this compromise so far remains purely political. The elite has not yet addressed the problems of society and the reforms that are needed, as Crisis Group has noted.

What do we know of the attackers? What were their aims?

We don’t know anything for certain at this stage. An audio statement has claimed responsibility for the attack on the tourists in the name of Islamic State (IS), but the format is not the same as other audio statements used by IS. Many such groups are competing to prove their determination and capacity for action.

There is another audio message from a second-rank Ansar al-Sharia leader, released on 17 March, calling for a global war, and for the government to free the numerous Tunisian jihadists currently in jail. There is also a twitter account of Ifrikiya al Alam that links to a webpage that extolls the attack, stating that Tunisia’s parliament was the primary target, but that tourists, the “real miscreants”, were a good target too. Ifrikiya al Alam is a cell close to Katiba Okba Ibn Nafa active near the Chaambi Mountain in the West of the country, and publishes statements vowing loyalty to both Al Qaeda in the Islamic Maghreb (AQIM) and Islamic State (IS). From 2012, their discourse evolved from peaceful preaching in Tunisia (dawa) to an AQIM position affirming the legitimacy of violence against the Taghout (the “impious abetters of tyranny”, by which they mean the security forces). Currently, they espouse a jihadist rhetoric that lies between AQIM and Islamic State.

I can’t say they are shocked, though, because people were prepared for something like this to happen.

What has been the Tunisian popular reaction?

Most Tunisians are dismayed by what has happened, and condemn anyone behind such attacks. I can’t say they are shocked, though, because people were prepared for something like this to happen. Until now, the popular reaction has been to rally to the banner of national unity, even if some people do fear new attacks, notably if the mounting chaos in next-door Libya spills over the border.

Will this increase polarisation between the Islamist and anti-Islamist camps, which has become a feature of Tunisia’s domestic politics?

Politically, there is no loser and no winner so far. The Tunisian authorities and society have not made the mistake of politicising these dramatic events. Prime Minister Habib Essid and President Béji Caïd Essebsi delivered calm, firm messages encouraging the maintenance of national unity. And the An-Nahda Party, which is Islamist, has reacted responsibly too. As the second political group in parliament, with some members in the new Cabinet, An-Nahda has called for a national conference on a global strategy to fight terrorism, and for the adoption of laws to support security forces during their work.

This is all possible thanks to efforts in the political elite in the past three months to reduce political tensions. If this attack had taken place during the serious polarisation of the second half of 2013, or as described by Crisis Group in the run-up to general and presidential elections during the second part of 2014, the result could have been a dramatic escalation of deadly political violence.

What more should Tunisia’s political establishment do at this point? And what can the outside world do?

Over the coming weeks, the main challenge for Tunisia’s political establishment is to avoid the temptation to revert to the old norm of authoritarian governance, which in the past has proved incapable of maintaining long-term stability. At the same time, Tunisia has to strengthen the legitimacy and efficiency of the judiciary and security forces if the state is to successfully overcome its economic and security challenges.

The positive side of this tragedy is that it has awakened a sense of solidarity with Tunisia in its struggle to ensure that it avoids anything like the fate of its Libyan neighbour.

Tunisia’s great advantage is continued international support. The main political parties use the country’s position in the world’s media spotlight to issue a joint statement calling on the international community to help the country. The positive side of this tragedy is that it has awakened a sense of solidarity with Tunisia in its struggle to ensure that it avoids anything like the fate of its Libyan neighbour.

And if the world values what Tunisia has achieved since 2011, it needs to respond. This aid could be in the form of counter-terrorism advice; it could be training in command and control to assist the often poorly coordinated units of the military and security forces; or it could be technological help in monitoring the vast desert spaces on the Libyan border. The country also needs aid to ensure the socio-economic development and stability of communities living within the border areas.

Since the uprising, a number of Islamist militant groups have gained strength in Tunisian border regions. Among them are Ansar al-Sharia in Tunisia, Ansar al-Sharia in Libya and al-Qaeda in the Islamic Maghreb. Do you expect more cooperation of the various jihadist groups in the future?

For the moment, there is no unified jihadist movement. Paradoxically, the problem currently is that the jihadist movement is weakening and fragmenting, which is making it more dangerous in some respects. There could be a race for tactical innovation between groups seeking attention, funds and recruits. The Bardo Museum attack could well be the product of such a development. If the claim made in the name of Islamic State proves to be correct, it would indicate a new consolidation. For sure, if the gathering disorder in the region turns to chaos, a catastrophic scenario of jihadi activity cannot be avoided in the medium term.

President Essebsi has declared his determination to counter terrorism. Does Tunisia have the capacity and resources to counter the rise of home-grown threats?

The president’s statement was a good first step but many challenges remain. It is crucial for the main political, trade union and civil society groups – both Islamist and non-Islamist – to define a consensual approach to public security and for the authorities to adopt a calmer anti-terrorist discourse in order to prevent renewed polarisation in the event of a new attack. The new anti-terrorist law that could assign police tasks in cities to the armed forces — which was about  to be discussed in the nearby Assembly when Bardo Museum terrorists attacked — should be implemented in a measured, considered manner. The format should be a resolute, planned, civilian-led anti-terrorist strategy.

Tunisia must also insulate itself from the regional interventions that we have seen in Libya, including, for instance, air force bombing raids by Egypt. At the same time, Tunisian parties should resist the temptation to invite outside powers to support themselves or their causes, because this will just import Libya’s violent polarisation into their own country.

In the past, Tunisia’s political discourse has been alarmist and focused on terrorism. But there is also a threat from criminal activity. Can you talk about the government’s response to organised crime, and explain the link between it and terrorism?

This is an important challenge. The authorities should define a new anti-terrorist approach that neither triggers anxiety in the population nor targets segments of population indiscriminately, like youth in deprived areas. Terrorism should be approached as a public security issue that can be tackled with firm measures while respecting the constitution and avoiding an over-harsh militarisation of government.

The security forces should clearly define the various threats faced by Tunisia, highlighting the real differences between radical Islamism, violent jihadism and organised crime. Not all violent groups are pure jihadists, using violence for political ends. At the same time, organised crime groups can tempt poor people who have peaceful Salafist convictions. Violent small groups can use illegal and dangerous trafficking as a way of putting down roots in a territory and spreading their ideology. Armed Islamist groups can use jihadist doctrine as a way to justify a lucrative trade.

Six months ago, a Crisis Group report called on Tunisia to strengthen the socio-economic development of border areas. This was to keep border communities from becoming alienated from the state and to counter any temptations to join militant groups. Do you see any such measures being implemented in Tunisia?

The main problem in Tunisia is that the radicalisation of jihadist movement is faster than the political will and financial ability to address socio-economic issues at the country’s borders. That’s why international help is so necessary.

Many Tunisians were convinced that a major terrorist attack was a question of time. This was not just because of radicalisation or arms flowing into the country. It was notably due to a collective fear that the Libya conflict could spread to Tunisia, and due to the growing crisis of confidence between political elites and ordinary citizens over the government’s ability to control the situation. Certainly, public spaces and tourist destinations might have been better protected, but such an attack could have occurred at any time and in any country.