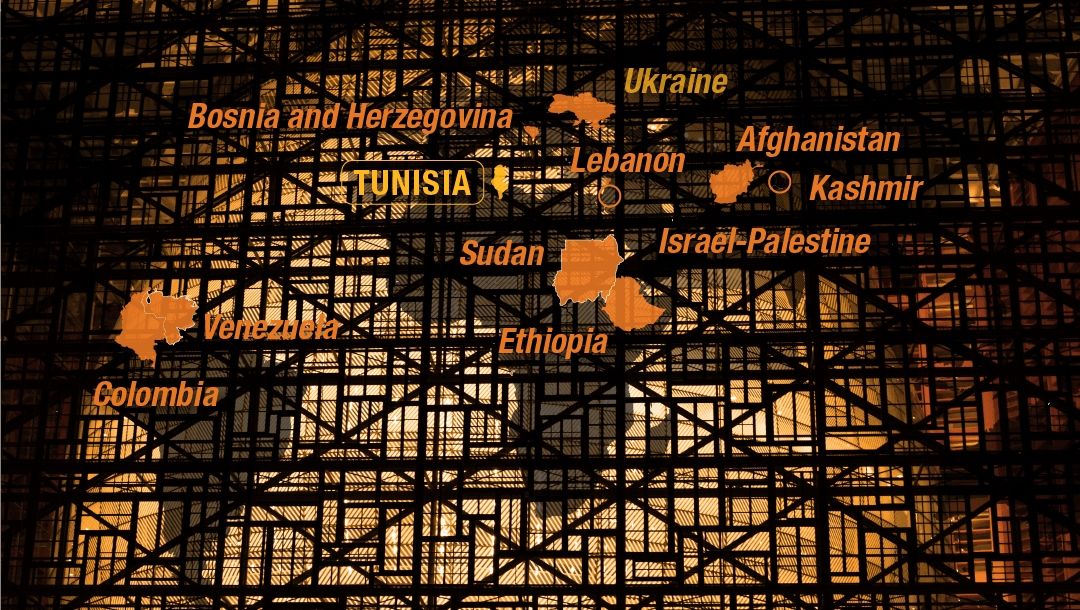 Tunisia faces multiple economic and social challenges following the suspension of parliament and the dismissal of the prime minister. This current state of emergency could fuel political turmoil and violence in the country. In this excerpt from the Watch List 2022, Crisis Group urges the EU and its member states to maintain bilateral cooperation with Tunisia and offer further economic incentives.

On 25 July 2021, when President Kais Saïed invoked Article 80 of the constitution to suspend parliament and dismiss the prime minister, he introduced a state of emergency that threatens Tunisia with unprecedented instability. The country faces a daunting set of economic and social challenges. Yet its leaders have limited means with which to tackle these problems or meet the population’s high expectations. Foreign pressure and populist one-upmanship could exacerbate polarisation between pro- and anti-Saïed forces and push Saïed toward growing repression. This development in turn could further stir up tensions and violence, heightening the risk of political turmoil.

As Tunisia’s main trade partner and in line with its European Neighbourhood Policy, through which it provides significant financial support, the European Union (EU) should:

In a 13 December 2021 address, President Saïed formally announced a roadmap for a political transition, possibly in response to repeated demands from Tunisia’s main international partners for a clear timetable. He stated that the “online consultation” on constitutional and political reforms he had mentioned in previous weeks would begin in January 2022. On 22 March, the anniversary of Tunisian independence, a national committee will summarise proposals from that consultation and draw up draft revisions to the 2014 constitution. A referendum will then take place on 25 July, the anniversary of the proclamation of the republic. Finally, new legislative elections will take place on 17 December, date of the 2010-2011 revolution’s start. This roadmap extends President Saïed’s state of emergency by another year and allows him to further strengthen his grip on power. At the same time, by scheduling new elections, he has, in effect, dissolved the suspended parliament. Saïed also continues to reject calls for a national dialogue by various actors, notably the Tunisian General Labour Union (UGTT), the country’s main labour organisation.

The president’s roadmap drew immediate criticism from the UGTT and most political parties, prompting efforts to unite opposition forces, which are divided into Islamist and non-Islamist camps. Opposition politicians have sought to reframe the political debate in terms of Tunisia’s economic and social problems, the population’s main concern.

Since 25 July 2021, when Saïed invoked Article 80, street protests have broken out periodically, both in favour of and against the president’s show of strength, dangerously polarising society. A pro-Saïed group, apparently a slight but waning majority of the population, is pitted against anti-Saïed forces that seem still to be in the minority. Saïed’s supporters still back the president’s seizure of power, which he has dubbed the “25 July corrective measures”, whereas Saïed’s detractors reject what they call a “coup d’état”. Some actors, mostly Islamists from the anti-Saïed camp, are pushing for parliament to reconvene under certain conditions: revising its internal regulations to make it more efficient, returning to the January 2014 constitution and restoring “democracy.”

President Saïed may choose to turn up the volume of his patriotic, populist “sovereignty” discourse to divert attention from economic and social issues. If he does so, he might trigger uncontrollable reactions among the population, such as demonstrations at foreign embassies and delegations, as Tunisians might come to perceive that the EU and the U.S. are contributing to the country’s economic suffocation. Other violence is also possible, especially if Saïed upsets local balances of power in the name of fighting corruption and with the intention of boosting his supporters’ influence in particular areas.

Many Tunisians are reconciled with the political authorities and even still have high hopes for the future, but the stalling economy is beginning to erode their confidence. The country’s GDP shrank by 9.18 per cent in 2020, partly due to COVID-19-related restrictions on tourism and other movement in and out of the country. The treasury can barely cover the salaries owed to public-sector workers or honour commitments to repay external loans amid rising public debt. Private debt has also skyrocketed. These indicators point to the risk of a serious budgetary and banking crisis ahead, potentially reducing living standards for many Tunisians.

In the short to medium term, Tunisia could be forced either to restructure its public debt – jumping through the hoops of the Paris Club (an informal group of creditor countries that seek to solve indebted countries’ repayment problems) to do so – or to declare bankruptcy. In either case, the socio-economic fallout would be painful. Debt restructuring, despite appearing less onerous than the second option, would have a severe impact on the population. The effects could include, inter alia, currency depreciation, state-owned company privatisation, public-sector salary freezes and forced early retirements, drastically reduced imports (probably triggering chronic shortages in essential goods), net increases in unemployment and inflation, and the risk of insolvency at public banks.

Meanwhile, there is talk in the U.S. Congress of making further financial and military aid to Tunisia conditional on U.S. State Department findings regarding the army’s role in any post-25 July abuses. The question is not settled. But should legislation to this effect pass and particularly should Washington indeed cut assistance, there could be turmoil within the armed forces as well as further disturbances in the street.

All these factors could have a snowball effect, pushing President Saïed further down the populist route. In particular, he could launch a selective crackdown on corruption and double down on discourse that criticises foreigners and the country’s rich to channel the frustrations of his supporters, who expect him to “purify” state institutions as well as private business practices. Such measures designed to capitalise on resentment among the disadvantaged sectors of society could help engender unrest in which the unemployed or others vent their anger. Such protests could turn violent, particularly if police use excessive force to restore quiet. Senior politicians and businessmen may find themselves more frequently targeted for arrest, to be paraded before the public as symbols of corruption. Instead of benefiting the economy, such moves would risk damaging business in general without providing a significant boost to government funds.

The EU considers Tunisia a priority country for macro-financial assistance and development support for the period 2021-2027. In 2018, in the context of a revised European Neighbourhood Policy and within the framework of international cooperation and development, EU institutions and Tunisia approved new strategic priorities for their relationship: inclusive and lasting socio-economic development, democracy, good governance and human rights, “rapprochement of Euro-Mediterranean peoples”, mobility and migration, security and combating terrorism.

Following the president’s power grab on 25 July 2021, however, Tunisia no longer meets the criteria for continued EU economic support. On 21 October, partly in solidarity with the dissolved Tunisian legislature, the European Parliament passed a resolution on the situation in Tunisia. Notably, it called for “a return to normal functioning of state institutions”, “the resumption of parliamentary activity”, within the framework of a national dialogue, the implementation of a “clear road map” and the re-establishment of the 2014 constitution before any constitutional reform. At the opening session of the plenary debate on this motion, EU High Representative for Foreign Affairs and Security Policy Josep Borrell declared that the EU will not base its actions on declarations but “on concrete actions and measures taken by the Tunisian authorities”. He concluded: “We will closely monitor the situation in the country and take steps based on its actions”.

After President Saïed announced the roadmap, the Council of the European Union stopped demanding a return to the 2014 constitutional order, opening the door instead to changes that might result from the forthcoming July 2022 constitutional referendum. On 16 December 2021, the EU said it had taken “due note” of the political milestones ahead, indicating that they “are an important step toward restoring institutional stability and balance” and insisting on the responsibility of the Tunisian people “to take sovereign decisions of great importance”. The EU member states also restated their willingness to support Tunisia “on the path of democratic consolidation”.

[The EU] should learn from its failures since the 2010-2011 revolution in trying to help successive Tunisian governments respond to public frustration.

Within this framework, the EU should continue its bilateral cooperation as per the NDICI for 2021-2027. Above all, it should learn from its failures since the 2010-2011 revolution in trying to help successive Tunisian governments respond to public frustration. The EU should prioritise activities within the MIP that could help Tunisia tackle problems underpinning clientelism, the economic slump and widespread distrust of political parties and institutions, which helped Saïed’s power grab win approval from many ordinary citizens. It could, for example, set up programs to encourage authorities in Tunis to facilitate access to credit for people in the country’s interior; avoid repressive legal measures that curtail freedoms, particularly in the economic sphere; and introduce clear rules about senior public-sector appointments to clarify relations between the state administration and political parties.

Finally, if President Saïed alters his political roadmap to include a national dialogue involving the country’s main political actors, unions and associations, so that the dialogue occurs before the 25 July referendum, the EU could offer Tunisia brighter economic prospects. For example, the EU could help Tunisia integrate more effectively within the European and Euro-Mediterranean economic space; prepare for an international conference on Tunisia bringing together G7 countries to discuss the conversion of bilateral debts into development projects; enable a new four-year IMF program with a strong social component; and assist the country as it navigates the technological and industrial transformations the COVID-19 pandemic accelerated.

Tunisia Looks to Reset with the West