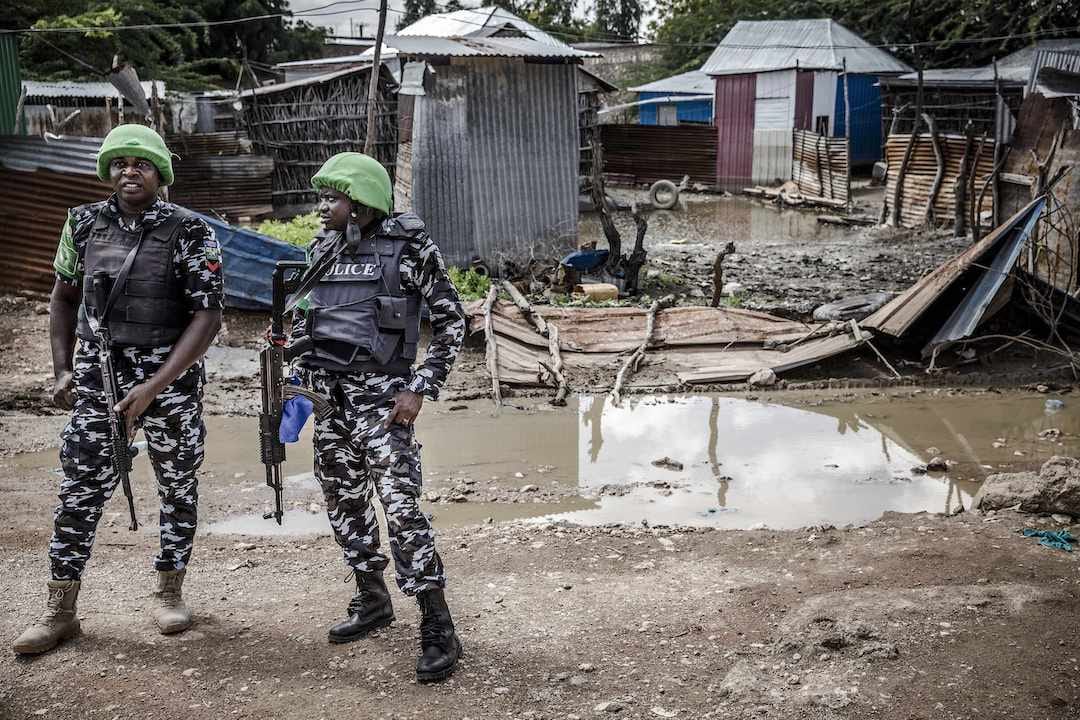 Two Nigerian Policemen deployed in Somalia as part of the African Union peacekeeping mission patrol next to an area destructed by heavy rains and floods in Beledweyne, Somalia, on December 14, 2019. LUIS TATO / AFP
Q&A / Global 05 November 2021

What have we learned so far from COP26, the 26th meeting of the Conference of the Parties to the UN Framework Convention on Climate Change?

We have learned, sadly, that global leaders were right to lower expectations over the past few weeks. COP26 is not yet over, of course, but its opening days have provided plenty more evidence that governments are not going to do what is necessary to bring greenhouse gas emissions under control. Moreover, even if they can agree on how to do so in the remaining days, and then follow through with it, the effects of climate change are already here, as seen across the world in recent years with one heat record broken after another, as well as floods, droughts and other extreme weather. Climate change today is also fuelling violence and instability in some parts of the world, and we can expect to see that trend worsen.

Emissions are the headline issue in Glasgow. The most realistic climate forecast scenarios cast doubt on the 2015 Paris Agreement’s aim to keep global warming well below 2 degrees, and preferably to 1.5 degrees, over pre-industrial levels by the century’s end. The path to “keep 1.5 alive” is to reach global net zero (that is, to balance the additions and removals of greenhouse gasses from the atmosphere) by 2050. In order to do that, the world needs to get halfway there by 2030. Based on commitments so far, there seems to be little chance that governments will agree to and then implement the necessary steps.

The conference has three other goals that, with the effects of climate change already here, are no less important. First is adaptation, meaning how to make the effects of climate change less dangerous and onerous for those who bear them. Second is raising money to finance the necessary changes, both for adaptation and for mitigation, which refers to steps to reduce or prevent greenhouse gas emissions to limit the severity of climate change. Third is increasing cooperation and finalising the “Paris rulebook” to formalise how countries go about pursuing these objectives. How these goals play out over the course of the week that remains of the conference will be crucial for much of the world, but for conflict-affected countries in particular.

Is climate-induced violence on the COP agenda?

No. Climate-induced violence – often put in the catch-all category of “climate security”, referring to how climate change affects matters of peace and security – is not on the agenda in Glasgow. Organisers had other priorities, with reducing emissions at the top of the list. But they also omitted climate security because it does not fit with the COP’s aim to advance shared solutions to shared problems. Negotiations would be even harder were questions of war and peace on the agenda.

A debate in the UN Security Council over a climate security resolution illustrates the divisions among states over how to deal with the issue of climate security and the bright line some governments draw between climate and conflict. Most Council members are keen to pass the resolution, which aims to create a baseline for discussions of how climate change shapes international peace and security. While the Security Council has addressed the question in certain cases, it does not systematically predict, assess and respond to such climate-related risks. China, Russia and India, however, oppose the Security Council’s involvement. Along with other critics, they are suspicious of initiatives that they believe could lead to what they see as meddling in states’ internal affairs. With such powerful opposition, there is little chance that the resolution will get through.

Most people concerned with climate security speak about climatic distress as a “threat multiplier” or “risk multiplier” – meaning that climate change exacerbates political, social and economic tensions, thereby raising conflict risk. This notion is correct, but it has inadvertently provoked a backlash. The “multiplier” language implies that factors other than climate are more essential in the security equation. Opponents in the Council and elsewhere exploit this implication to suggest that discussions of climate change belong elsewhere in the UN system, whereas UN Security Council deliberations should be reserved solely for the underlying, fundamental drivers.

Not dealing with climate security in the Security Council is a mistake. The evidence tying climate change to conflict is growing quickly, even if the link is not yet as widely understood as the connection between human activity and climate change. It took the Intergovernmental Panel on Climate Change nearly 30 years to reach the degree of certainty it expressed in its August report that human activity causes climate change. Many people could die needlessly if major powers wait to accept that climate change increases risks of conflict – and to act accordingly.

Is it a problem to leave conflict off the COP agenda?

Not necessarily. The issue is not whether climate security figures as an official agenda item. The issue is whether COP26 negotiators take account of conflict dynamics in their talks about achieving the conference’s aims. Most important in this regard are adaptation and climate finance. It is hard to imagine encouraging sustainable agriculture, slowing deforestation and helping preserve nature writ large without dealing with the conflicts that wrack so many of the countries affected by climate change.

Half of the most climate-fragile countries in the world also face conflict and crisis today.

Climate change and conflict do not exist in isolation from each other. The countries most exposed to climate change are disproportionately affected by conflict, and many of the countries suffering from both often suffer as well from poor governance – all of which stand in the way of adaptation and mitigation measures. Half of the most climate-fragile countries in the world also face conflict and crisis today, according to Crisis Group’s calculations.

War, of course, can render countries or parts thereof completely inaccessible. But it can interfere with adaptation in other ways, too, and effective interventions will often need to deal with highly local conflict dynamics. Consider the following examples:

As these examples show, climate change is happening to no small extent in conflict-plagued countries where the risks attending adaptation are especially high. Efforts to help communities adapt in places where armed conflict actors exploit environmental resources or even just raise the overall risk of violence, will look quite different than they would in peaceful areas. In conference conclusions, COP26 delegates should acknowledge the importance of reckoning with conflict in order to achieve the conference’s own stated goals.

Climate finance prefers safer bets, which is why a disproportionately small share of adaptation money flows to conflict-affected areas.

Climate finance prefers safer bets, which is why a disproportionately small share of adaptation money flows to conflict-affected areas. States must grapple with this challenge if they are to reach those suffering in the most fragile environments. As the International Committee of the Red Cross puts it, they must ensure that financing is “fit for purpose”. Aligning climate finance with development priorities was already a goal for COP26. Moving forward, a goal should be aligning it with conflict prevention and resolution priorities as well.

Many climate security advocates want it on the agenda for COP27, likely to be held in Egypt. Should it be?

It will be hard to get climate security on the official agenda for COP27, for all the reasons it was not on the agenda in 2021. In addition, should the present conference generate less action on emissions than hoped, as seems likely, there will be all the more pressure to focus on that headline issue. Since climate security, by definition, relates to matters of international peace and security, its proper home is the UN Security Council. At present, the climate security draft before it appears dead, but its advocates should continue to bring climate security issues before the Council for piecemeal treatment, even if the path to its systematic incorporation into the Council’s agenda is blocked for the time being.

The key is not that climate security has formal billing on the COP27 agenda, but rather that it is threaded throughout relevant parts of the agenda. The delegates need to take account of climate-induced violence as it relates to the conference’s objectives, chiefly adaptation and finance. Most fundamentally, they need to understand that it is impossible to effectively treat climate fragility and conflict dynamics on separate tracks in the many places where they overlap and that are already feeling some of the most extreme impact of climate change. A leader-level event on COP27’s margins, convened by the host, might help encourage this degree of literacy, and highlight the importance of climate security figuring significantly in adaptation discussions.

This text was updated and the date of the FARC ceasefire corrected to 2014 on 6 November 2021.