As the crisis in the Central African Republic deepens, the country is experiencing increasing instrumentalisation of religion, societal divisions and collective fears.  In this video, Crisis Group's Central Africa Project Director Thierry Vircoulon explains how the inter-communal tensions between armed groups in CAR, which straddles the mainly Muslim Sahel and the predominantly Christian central African savannah, is now compounded by an emerging conflict between armed communities.

In this video, Crisis Group's Thierry Vircoulon explains how the inter-communal tensions between armed groups in CAR is now compounded by an emerging conflict between armed communities. CRISIS GROUP 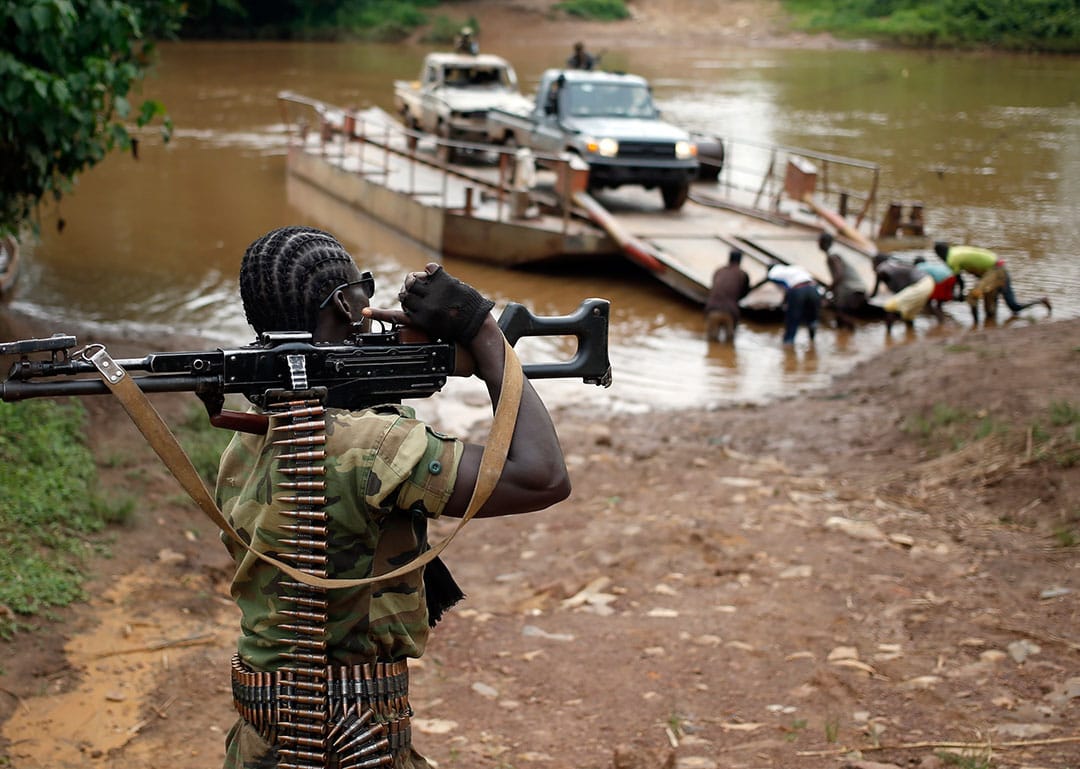 A Seleka fighter holds his machine gun as other fighters cross a river near the town of Kuango, close to the border with Democratic Republic of Congo, on 9 June 2014. REUTERS/Goran Tomasevic
Report 230 / Africa 21 September 2015

In Central African Republic, the conflict between armed groups is now compounded by a conflict between armed communities. The roadmap to end the crisis including elections late 2015 presents only a short-term answer and risks exacerbating existing tensions. The transitional authorities and their international partners must address crucial issues by implementing a comprehensive disarmament policy and reaffirming that Muslims belong within the nation.

Crisis in the Central African Republic (CAR) is longterm and characterised by sporadic surges of violence against a backdrop of state disintegration, a survival economy and deep inter-ethnic cleavages. Armed groups (including the anti-balaka and the ex-Seleka) are fragmenting and becoming increasingly criminalised; intercommunal tensions have hampered efforts to promote CAR’s national unity and mend its social fabric. Unfortunately, the roadmap to end the crisis, which includes elections before the end of 2015, presents a short-term answer. To avoid pursuing a strategy that would merely postpone addressing critical challenges until after the polls, CAR’s transitional authorities and international partners should address them now by implementing a comprehensive disarmament policy, and reaffirming that Muslims belong within the nation. If this does not happen, the elections risk becoming a zero-sum game.

By virtue of its geography and history, CAR is located at the crossroads between two regions and two peoples: in the north, the Sahel with its pastoralist communities and majority Muslim merchants, and in the south, Central Africa with its communities of the savanna, initially animist but now predominantly Christian. The Seleka power grab in March 2013 marked a fundamental reversal of CAR’s traditional political landscape. For the first time since independence, a force stemming from the Muslim population of the north and east of the country held the reins of power. The ensuing clashes between Seleka and anti-balaka forces generated strong intercommunal tensions that were exacerbated by the instrumentalisation of religion, societal fractures and collective fears, reviving traumatic memories of the pre-colonial slave trade era.

The current approach to disarmament, which was formalised by the agreement signed at the Bangui Forum last May, underestimates both the extent to which the conflict is now communal, and the criminalisation and fragmentation of armed groups. In western CAR, following the withdrawal of ex-Seleka fighters and the flight of the region’s Muslim communities, the militarily and politically unorganised local armed groups known as the anti-balaka, have begun preying on local communities. The Seleka coalition in turn has splintered into several movements over leadership rivalries, financial squabbles and disagreements about strategies to adopt toward the transitional authorities and international forces. The fragmentation and criminalisation of CAR’s armed groups makes negotiations much more difficult.

In this context, the rushed organisation of elections risks exacerbating existing intercommunal tensions, undoing the country’s indispensable reconstruction efforts and postponing indefinitely the resolution of crucial issues like the disarmament of militias and communities.

The outstanding issues to be addressed by CAR’s transitional authorities and international partners require replacing the current disarmament program with a comprehensive policy that engages not only militiamen but also communities, and which includes real opportunities and effective sanctions. This means maintaining a capacity to restrain armed groups – in other words re-evaluating the planned withdrawal schedule of the French Sangaris forces and reducing armed groups’ financing abilities – among other measures. This would lessen the appeal of the militia economy for CAR’s youth.

It is also imperative to avoid the electoral process adding fuel to the fire. To do so, the transitional authorities should reaffirm Muslims’ equal rights, register them to vote, demonstrate the government’s concern for populations in the northeast, and diversify recruitment in the public service. The country’s international partners and transitional authorities focus too much attention on the electoral process in isolation from other issues: they should prioritise these other issues in their conflict resolution strategy, as elections alone will change very little in a country which today has ceased to function as a state.