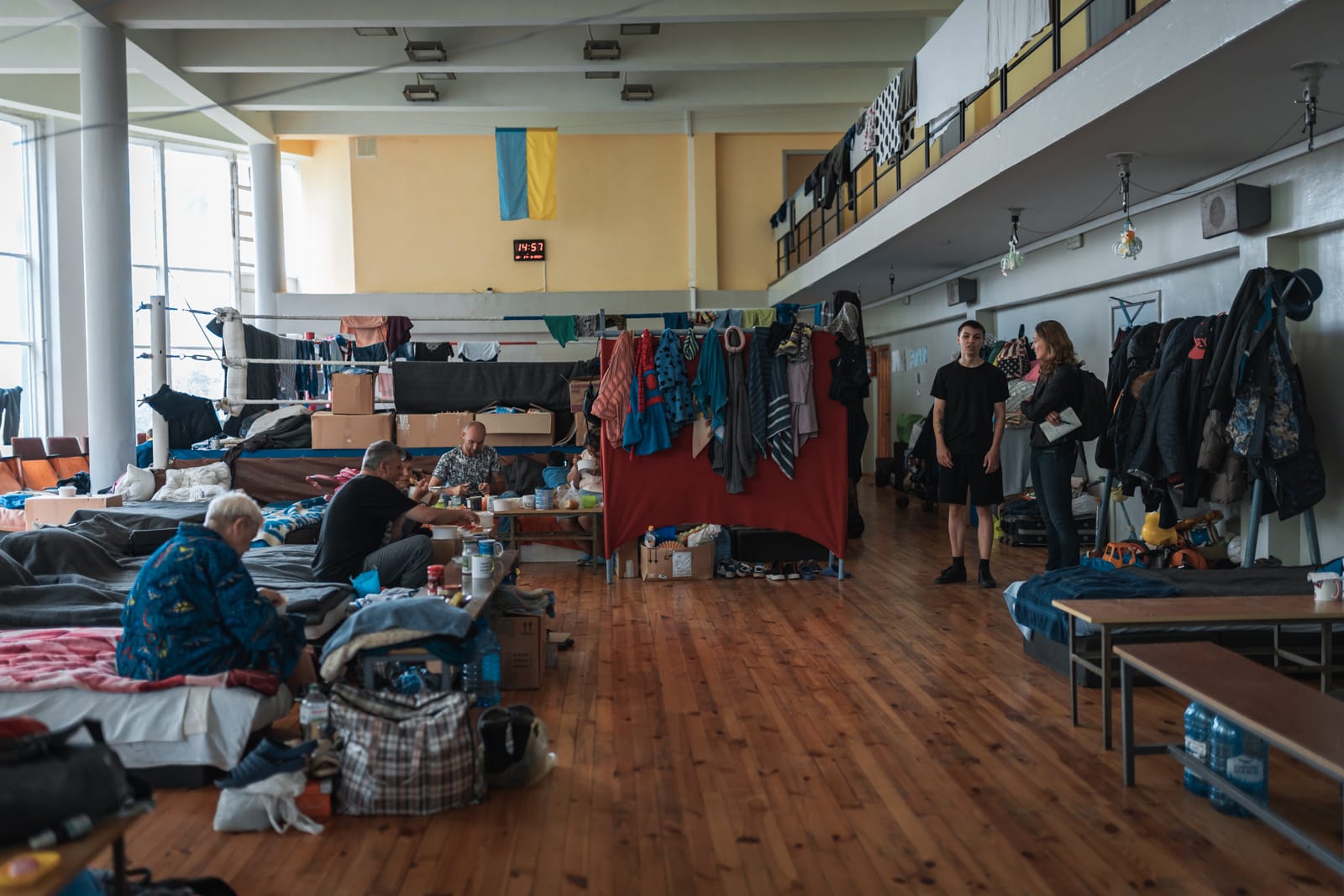 War has displaced more than six million people inside Ukraine, in addition to the refugees who have fled across borders. More action is needed, not just to meet their basic needs, but also to develop a long-term humanitarian assistance strategy.

The Russian invasion of Ukraine in early 2022 escalated a war simmering since 2014, when Russia annexed Crimea and backed separatist militias in the Donbas region of eastern Ukraine. Europe’s biggest conflict in decades sent millions of people fleeing into neighbouring countries. Within Ukraine, more than six million displaced persons are now living in central or western regions like Lviv or Ivano-Frankivsk.

Communities and civil society were quick to supply the uprooted people with food, shelter and other basic necessities, often filling gaps in the state’s response. Their charity and volunteer labour was crucial in coping with the immediate emergency, but it is not sustainable. As the war drags on, donor nations and the international organisations they fund will need to shoulder more of the task of assisting displaced Ukrainians. They should prioritise long-term approaches to assistance, in which local civil organisations take the lead, but which lay the groundwork for government services to pick up the challenge in the future.

In June 2022, Crisis Group visited several towns in the Lviv and Ivano-Frankivsk regions. We spoke to the aid workers on the front lines of the response, as well as to displaced people, about how to meet basic needs and build a sustainable humanitarian strategy. 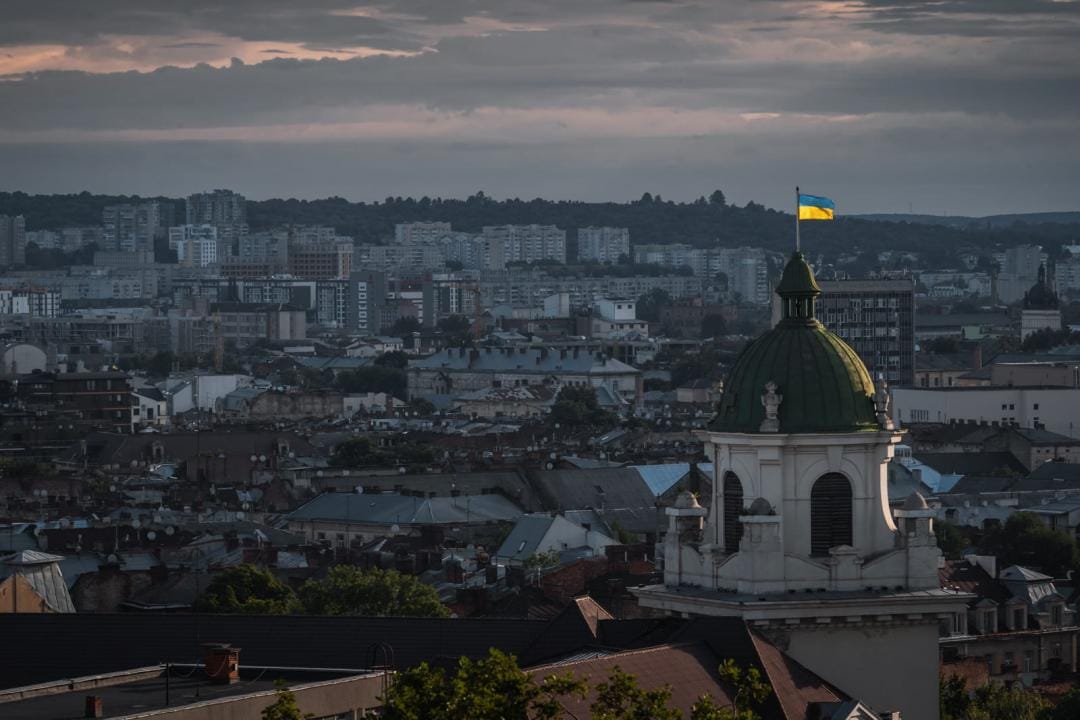 A Ukrainian flag flies over Lviv, the biggest city in the country’s west. An important hub only 100km from the Polish border, it saw hundreds of thousands of displaced Ukrainians when the Russian invasion began. Many continued to Poland, while others stayed in the region. Today, 240,000 internally displaced persons (IDPs) remain in the Lviv area, many of whom are staying in communal shelters like schools, sport stadiums and dormitories. With the school year starting on 1 September, authorities will need to relocate many of these people. 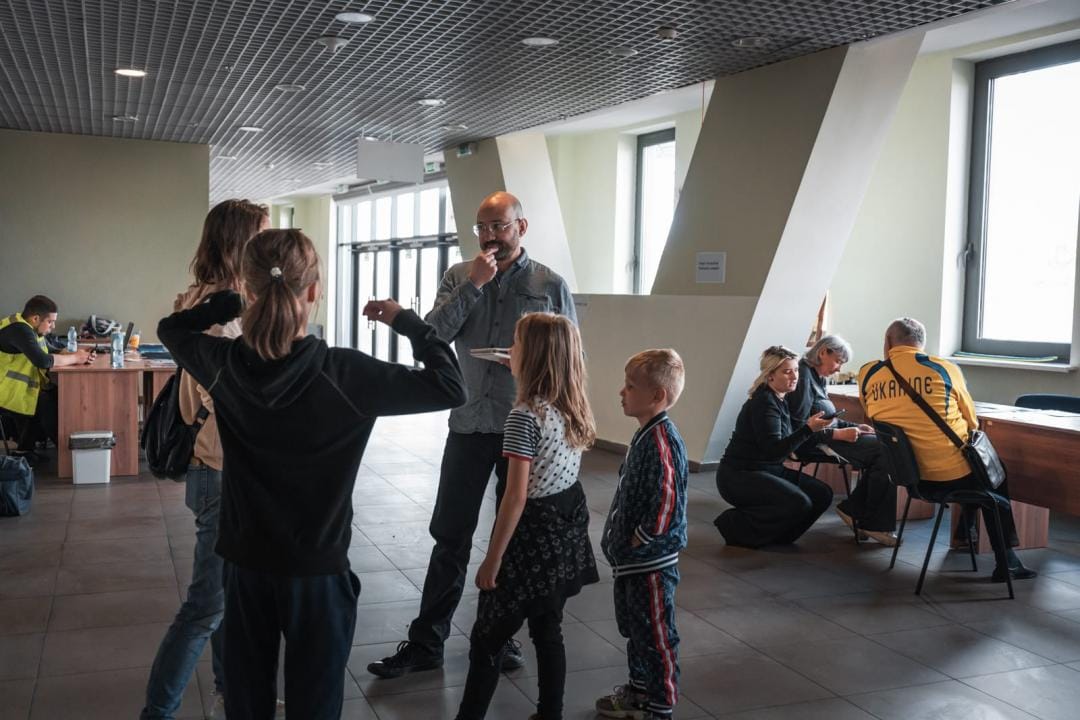 Crisis Group’s Senior Analyst for Ukraine Simon Schlegel speaks to a psychologist working in one of Lviv’s main communal shelters. People who have fled great danger are in need of psychosocial support, as well as housing and medical care. 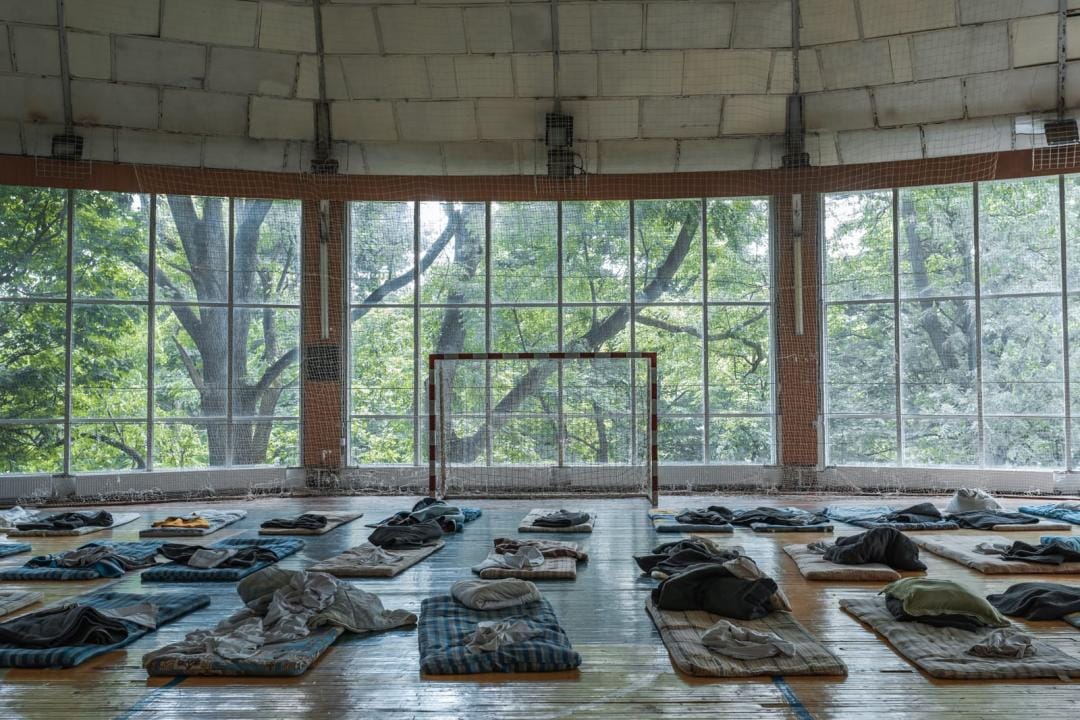 Mattresses lie on the floor of a gymnasium in Lviv. Summer weather allows the IDPs to spend time outside. In winter, people will need to be moved to longer-term accommodations. 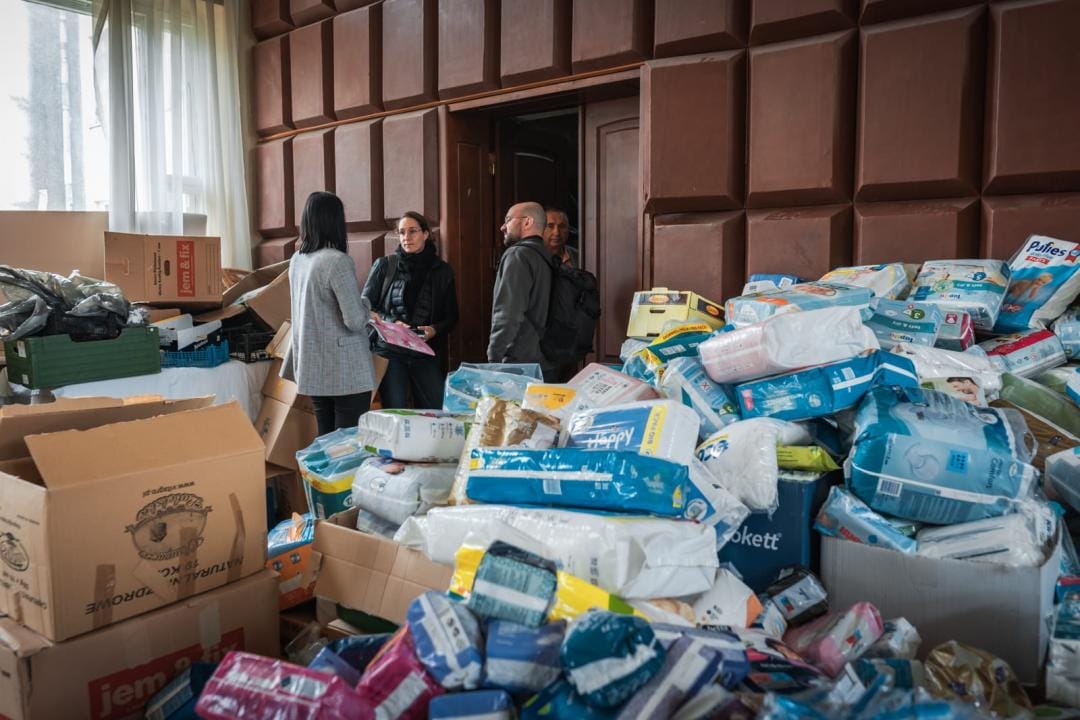 Crisis Group experts Alissa de Carbonnel and Simon Schlegel talk to Viktoriya Debenko, deputy mayor of Halych, a town in the Ivano-Frankivsk region. The municipality stores hygiene products in an assembly hall before delivering them to the displaced people now living in town.

State and local authorities were poorly prepared for a crisis of this scale, and many of the humanitarian and food supplies that they provide to the IDPs are donated by residents or local businesses or come from abroad. 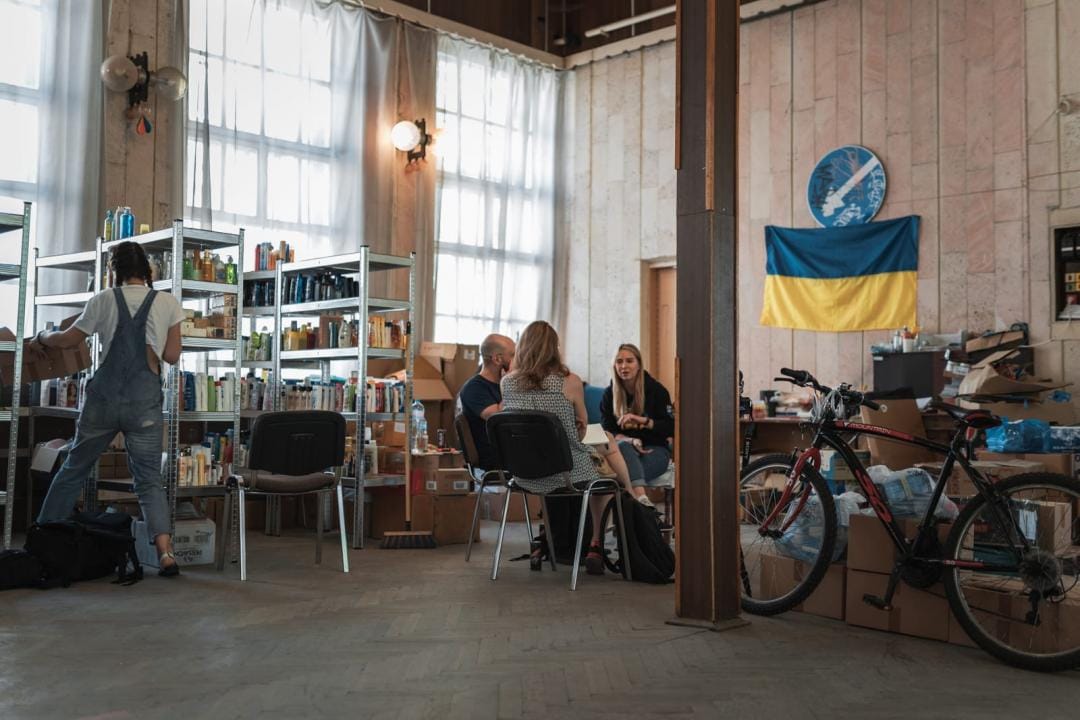 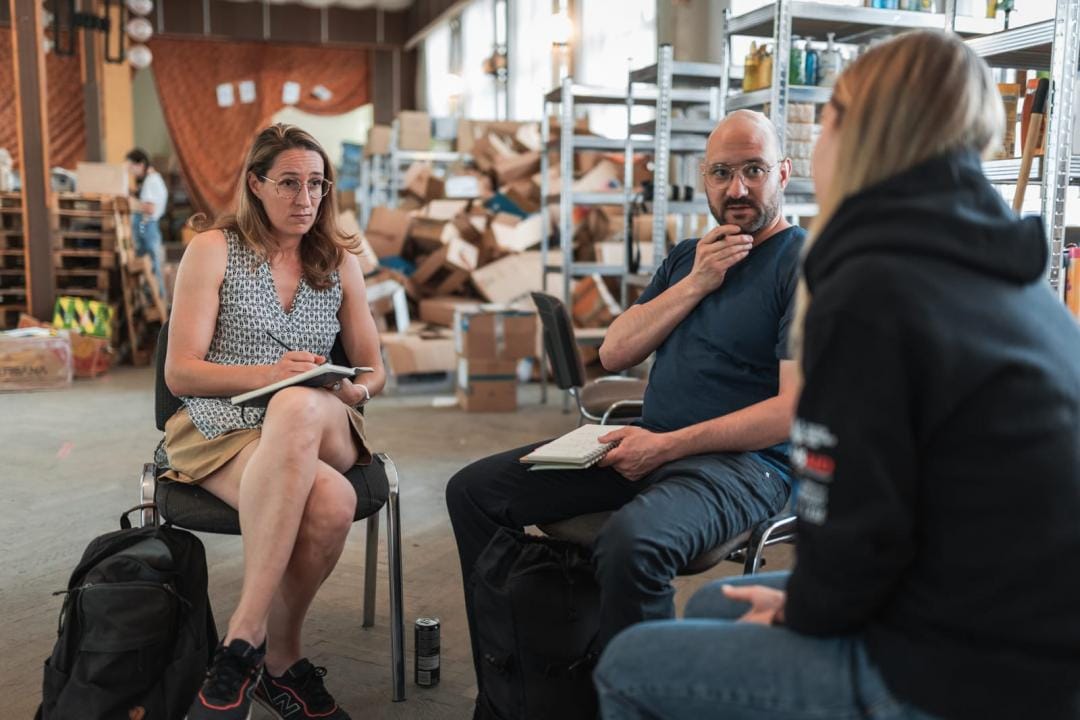 Simon and Alissa talk to Kateryna Politytska, Lviv regional coordinator of Let’s Do it Ukraine, a local NGO. Before the Russian invasion began, this organisation did environmental cleanups. Now it provides help to the displaced population and to Ukrainians stuck in the war zone in the east.

The meeting was at the organisation’s warehouse, a middle-school auditorium, where they stock food, shampoo, toilet paper and other necessities before distributing them to those in need. Around ten people work at the makeshift warehouse every day; chatting with co-workers helps keep their minds off the war, says Kateryna.

Over the course of spring and summer, Crisis Group has talked with more than twenty local organisations. They are just the tip of the iceberg. Hundreds such groups, some established, some newly formed, have pivoted to help the displaced. Some small NGOs, like Let’s Do it Ukraine, have been able to secure funding, which allows them to keep working here. But a major complaint among these grassroots organisations is that both the Ukrainian government and international bodies require grantseekers to clear so many bureaucratic hurdles before they will release the money.

The ad hoc nature of the grassroots response made it fast, flexible and unbureaucratic. Nonetheless, in conversations with Crisis Group, volunteers at these organisations said they felt like they had been left to deal with this alone during the first weeks of the crisis. They had expected more and quicker emergency aid from the state and the international humanitarian sector. 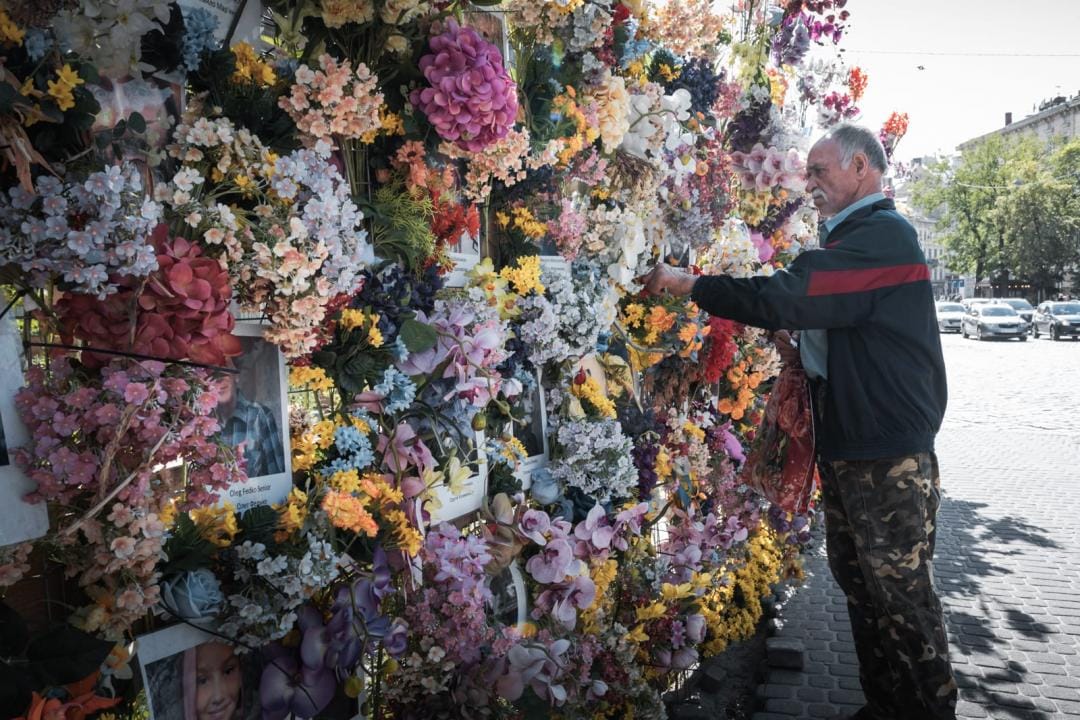 A man looks at a flowered memorial dedicated to the Russian invasion’s victims in downtown Lviv. The U.S. non-profit organisation Wall of Hope Foundation put it up.

Since 24 February, there have been almost 12,000 civilian casualties related to the conflict, including over 5,000 deaths, according to UN records. The real figure, however, is thought to be much higher. 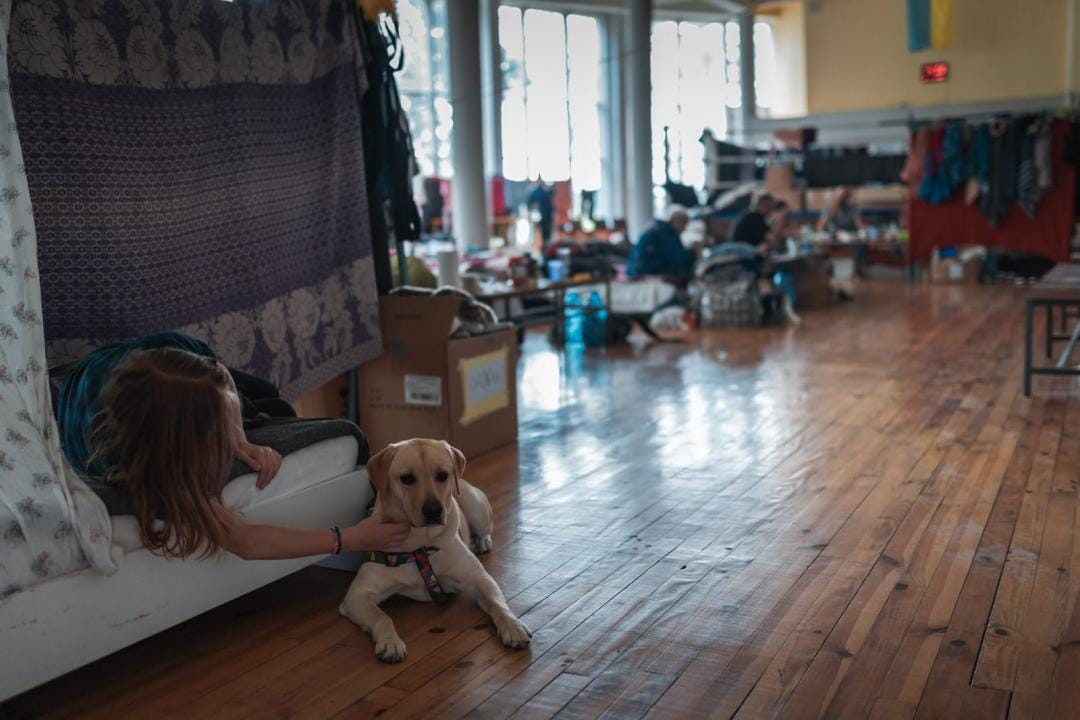 A displaced girl and her dog in the Lviv Technical University gym, now a makeshift shelter. Many families took their pets instead of material possessions when they fled. 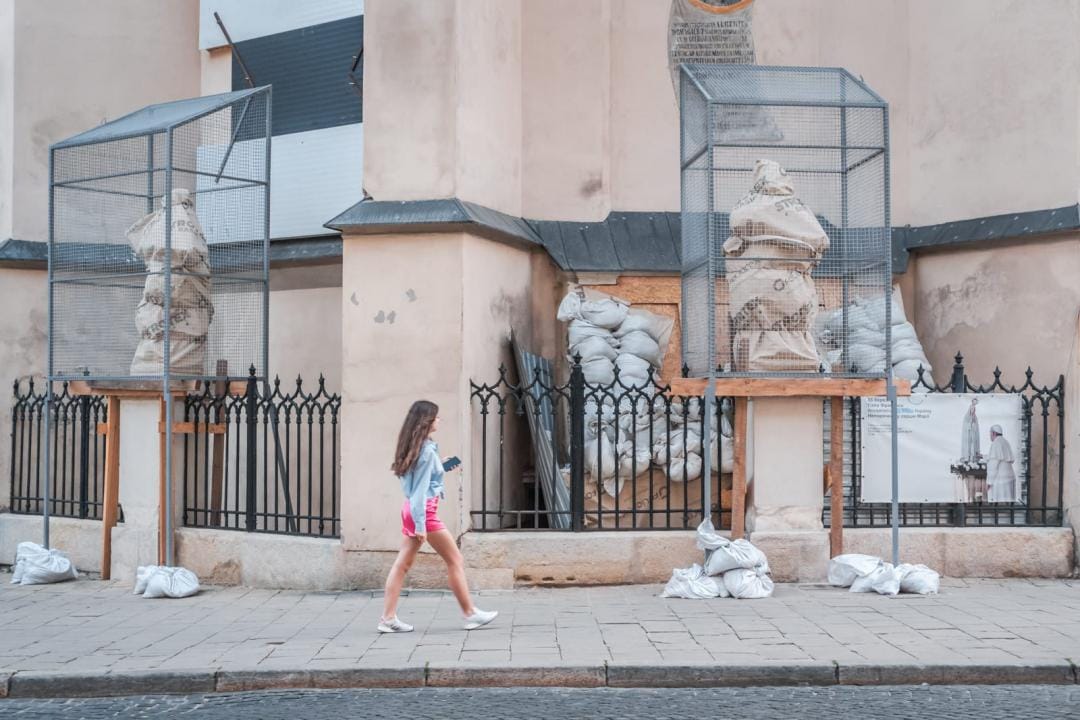 A girl walks by Lviv’s Latin Cathedral, in the city’s historic centre, where statues have been wrapped and caged, and windows stacked with sandbags for protection from airstrikes. 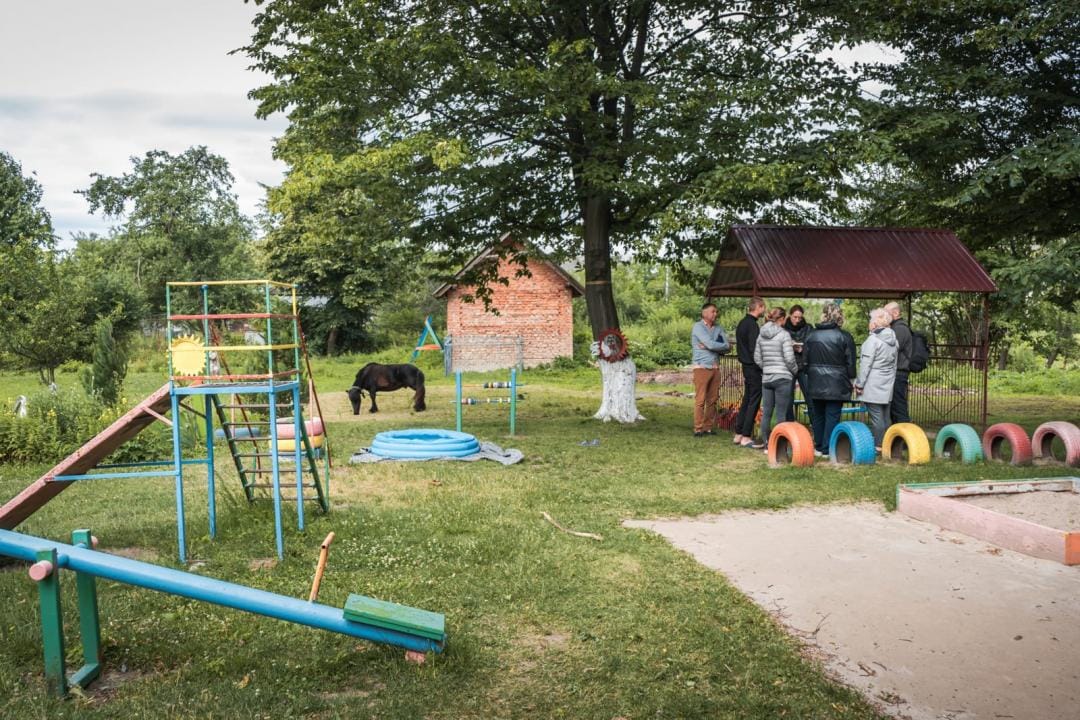 A displaced couple from the Donetsk region, now living in a kindergarten in the Ivano-Frankivsk region, tell their story. The man used to work as an auto mechanic. He feels confident that he could provide for the family using his skills, but he needs capital to open a repair shop like the one he lost at home. Many of the displaced similarly lack job opportunities, which were already in short supply for residents before the war’s economic disruptions. 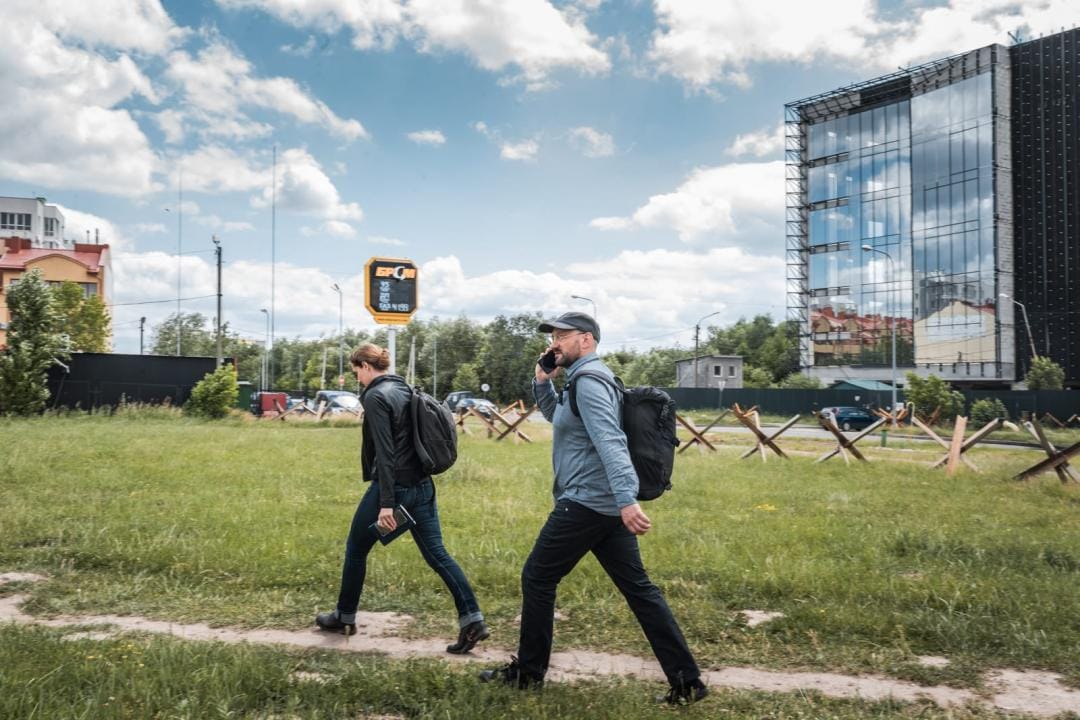 A thoroughfare in Lviv. Anti-tank obstacles are everywhere in the city. 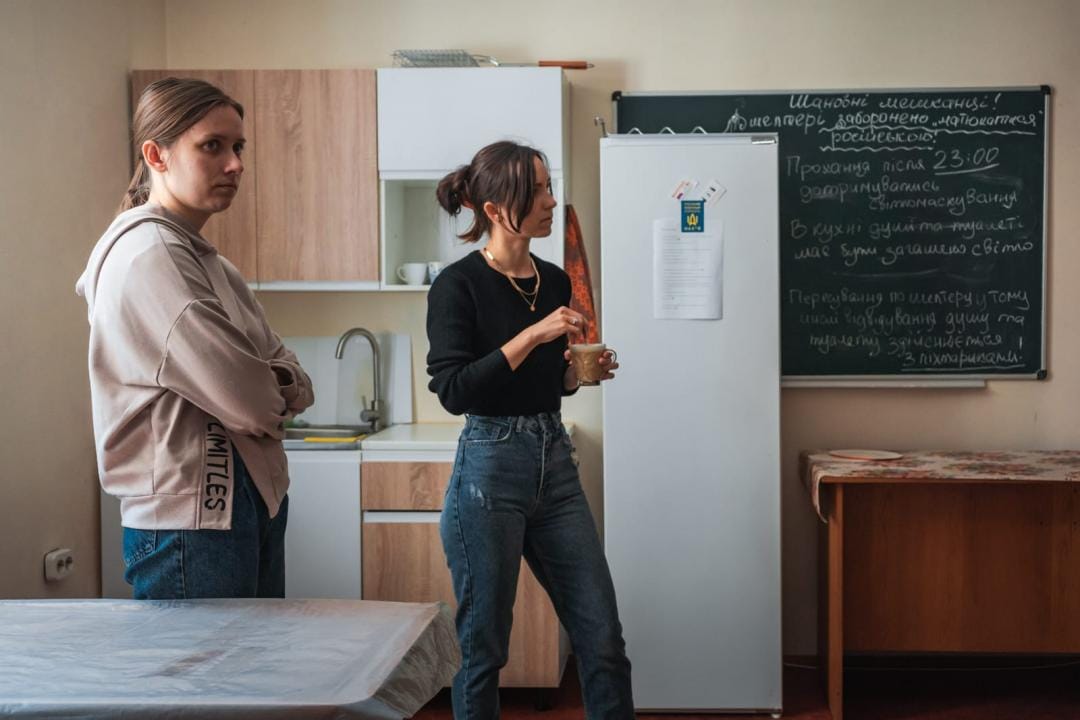 Veronika Pereplytsia (left) and Kapitalina Kaplan (right) in the kitchen of a Greek Catholic parish house where they are living with their families in Ivano-Frankivsk. They fled their homes in the Donetsk city of Slovyansk. When the invasion began, Kapitalina recalls, an acquaintance offered her a flat in the city. As more people moved in, however, she had to leave. 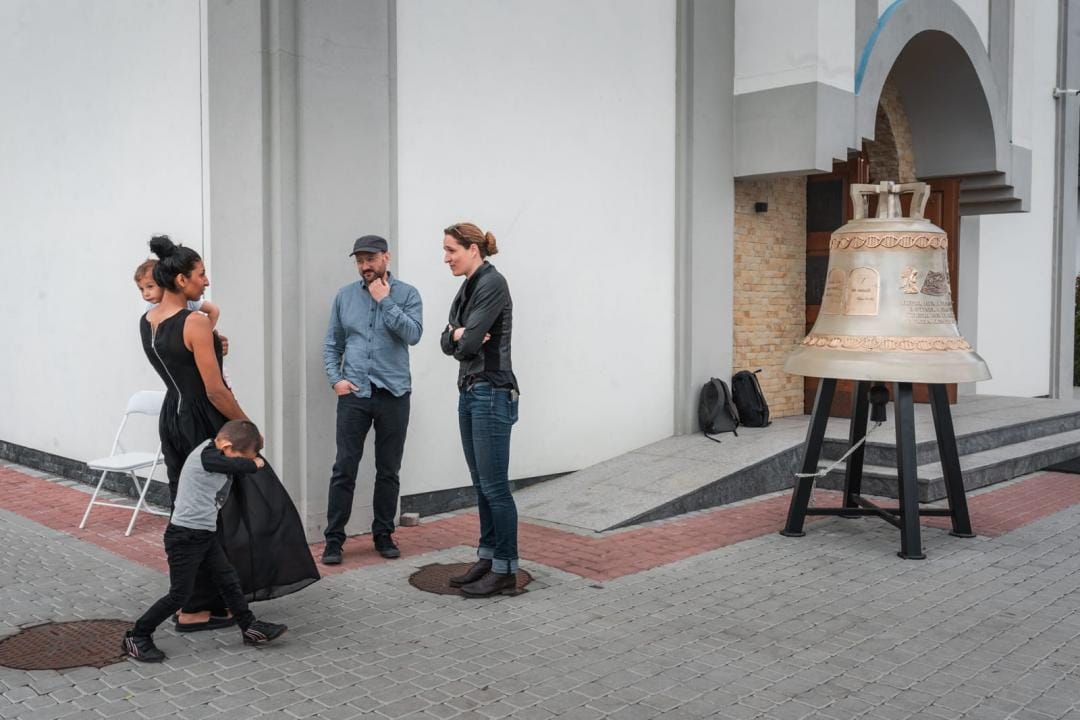 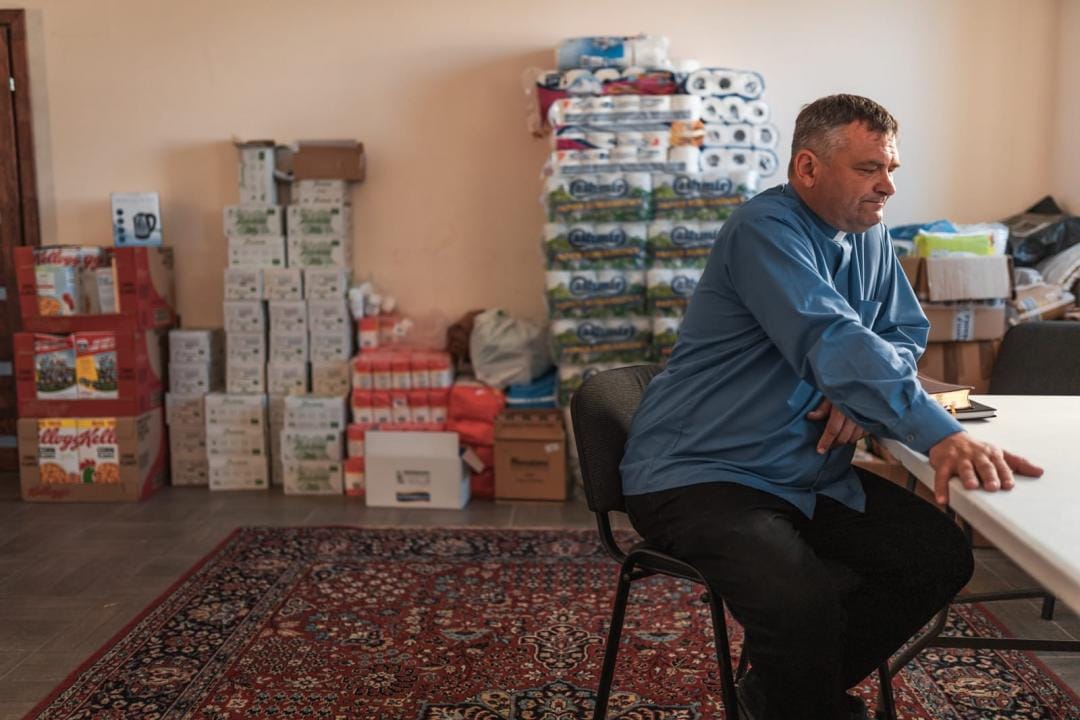 (Top) In conversation with Ludmyla, a Roma woman displaced from Odessa, now staying at St. John Paul II Church in Lviv. Inside the church, Father Grigory (bottom) shelters displaced Roma struggling to find accommodation at other communal centres. The church compound is now home to over 200 people.

Minority groups face additional difficulties in finding accommodation when displaced, and communal shelters tend to send displaced Roma away. Many are told to move on to Zakarpattia region, home to Ukraine’s largest Roma community. This approach places additional hardship on an already marginalised community. 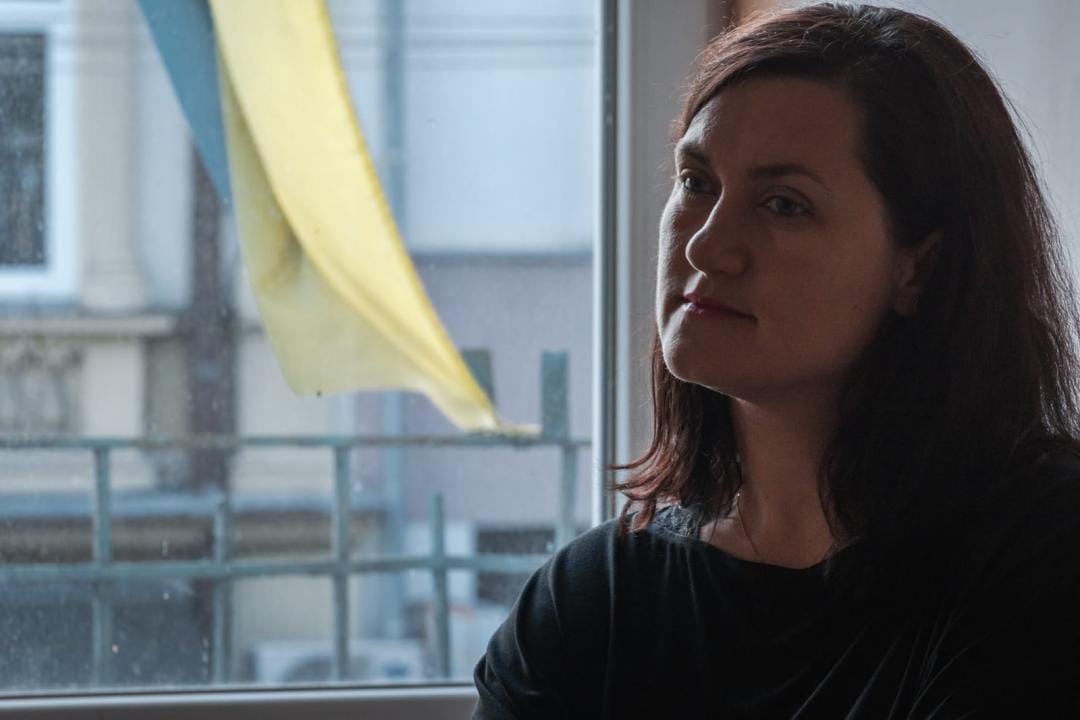 Evheniya Bardyak, member of the Ivano-Frankivsk regional parliament and head of the NGO Moloda Prosvita Prykarpattiya. The NGO helps the region’s municipalities cope with the large number of displaced persons. She says everyone – and not just the humanitarian sector – underestimated how big the displacement crisis would become. Most of those who fled came with the idea of returning home within days or weeks. 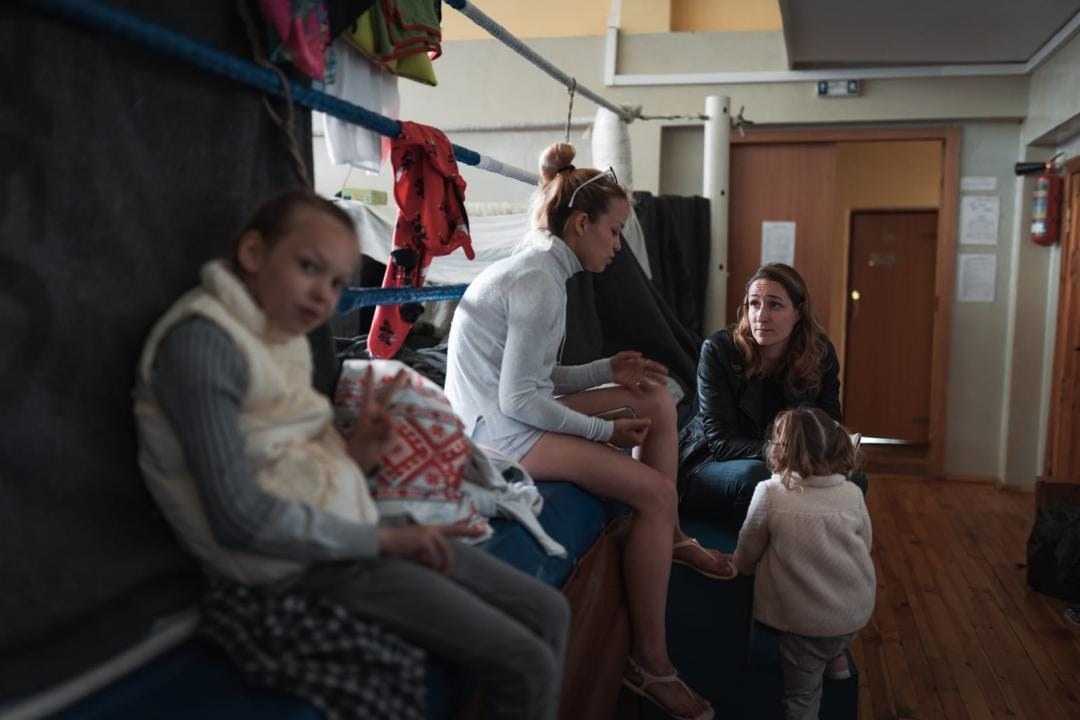 Alissa talks to a single mother from Luhansk living in the Lviv Technical University shelter with her three daughters and her mother. According to local authorities, Luhansk region alone has seen around 300,000 people evacuating their homes since 24 February.

Most of the displaced population in Ukraine are women and children, with nearly two thirds of Ukrainian children having left home since the Russian invasion started. 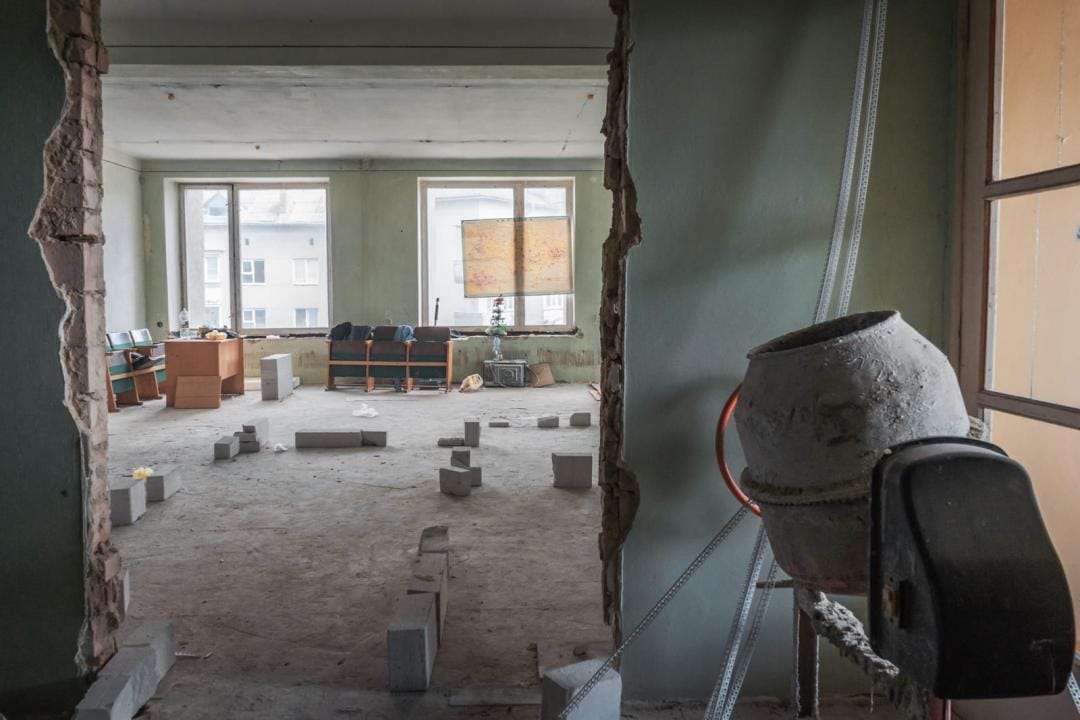 A dormitory under renovation to host IDPs starting in September in Drohobych, Lviv region.

In conversations with Crisis Group, many said housing was the main challenge for the humanitarian response in western Ukraine. Many renovation projects are now under way. Some are funded by the state, others by international organisations or private donors. The state is in most cases the owner of the buildings being refurbished – underused dormitories of factories or educational institutions. With winter around the corner, most upgrades will be rudimentary. 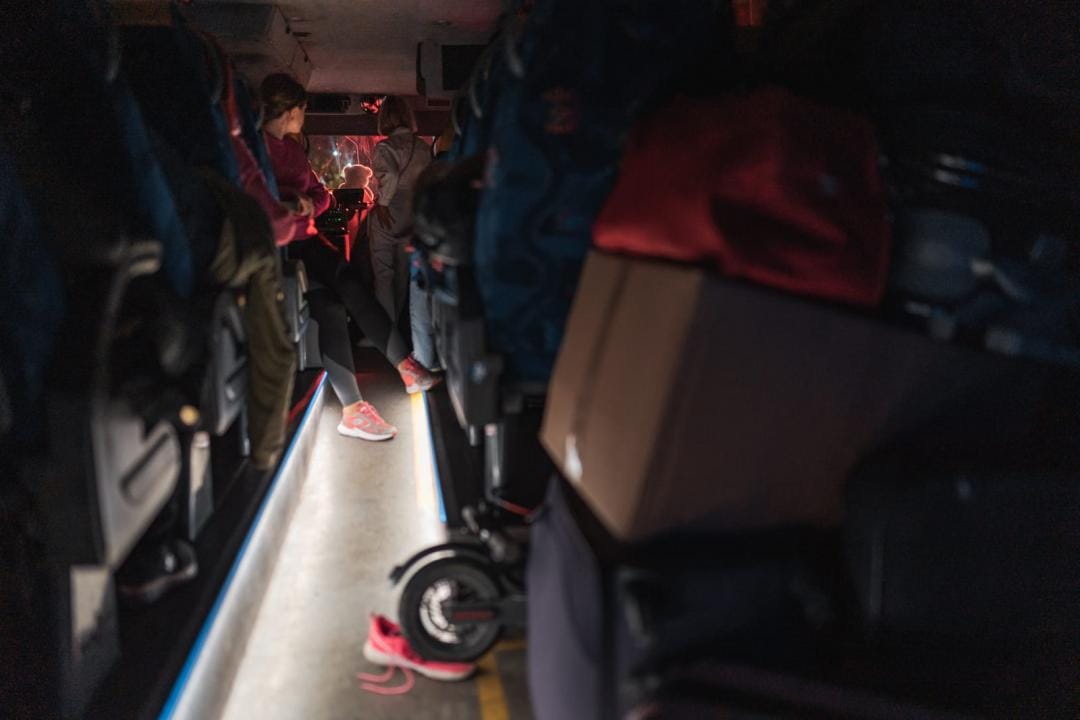 A bus on its way from Lviv to Poland at night. Passengers are mostly women, children or elderly people. Ukraine introduced martial law on the day of the invasion, prohibiting most men between the ages of eighteen and 60 from leaving the country. As a consequence, more than 90 per cent of those arriving in neighbouring countries are women and children. But this regulation creates new vulnerabilities, as women and children arriving in a foreign country with few assets and no social network may face dangers like human trafficking, exploitation and sexual violence. Men staying in Ukraine struggle to find work and housing.

Many of those who fled Ukraine during the first months of the invasion are now coming back. Since the Russian attack on Kyiv and northern Ukraine foundered at the end of March, the capital and its environs have seen more refugees returning than leaving.

100 Days of War in Ukraine: Russia’s Offensive in the East