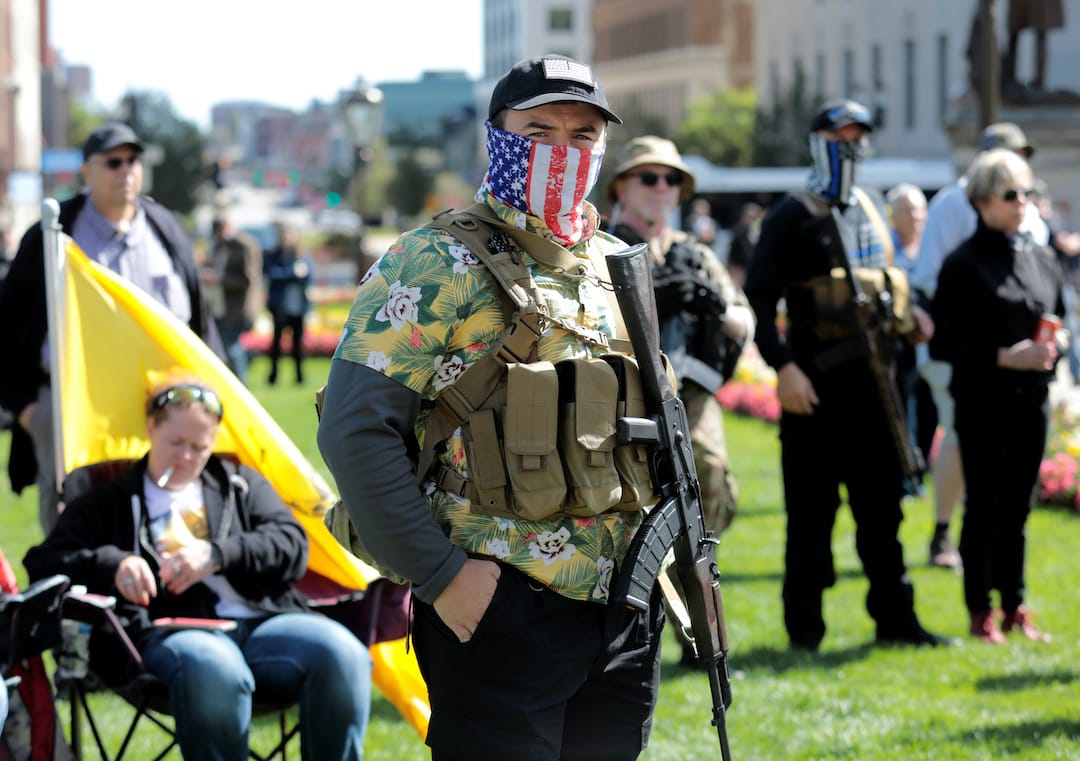 Too Much to Lose: Steering the U.S. Away from Election-Related Violence

Presidential elections in the United States are always rough-and-tumble affairs, but the 2020 election is different. While Americans have grown used to a certain level of rancour in these quadrennial campaigns, they have not in living memory faced the realistic prospect that the incumbent may reject the outcome or that armed violence may result. That has changed in 2020 because of the emergence of risk factors that would spell trouble in any country: political polarisation bound up with issues of race and identity; the rise of armed groups with political agendas; the higher-than-usual chances of a contested outcome; and, in President Donald Trump, a leader who has too often courted conflict to advance his personal and political interests. The likelihood of unrest may ebb and flow as the dynamics of the campaign shift, but it is almost certain to remain, and it will increase if either side forms the impression that the vote has been rigged.

Domestic officials at every level of government, foreign partners, civil society and both traditional and social media can help lower that risk. In the days before the 3 November vote, state and local governments, with civil society’s support, should redouble efforts to ensure that voters can cast, and officials tally, ballots free of intimidation. Traditional and social media should not pronounce results prematurely or give candidates a platform to declare victory until the institutional process has run its course. Foreign leaders should similarly wait before making their congratulatory telephone calls. Ideally, influential figures from within President Trump’s Republican Party and foreign leaders with a channel to the president and his close associates would signal that interfering with the peaceful transfer of power is unacceptable and that, were he to attempt it, he would be on his own.

It is hardly surprising that the U.S. finds itself confronting the spectre of electoral violence.

At one level, it is hardly surprising that the U.S. finds itself confronting the spectre of electoral violence. The country may be internally at peace, but it is not especially peaceful. The U.S. has seen slavery, civil war, lynching, labour strife and the ethnic cleansing of indigenous peoples. The wounds of those legacies have never fully healed. The country is awash in firearms, has gun homicide levels unmatched by any other high-income country and is home to a deeply rooted white supremacy movement that according to the U.S. government’s own experts is growing in virulence. Racial injustice, economic inequality and police brutality are chronic sources of tension, which periodically bubbles over into peaceful demonstrations and, sometimes, civil unrest. The protest wave that followed the police killing of an unarmed Black man, George Floyd, in Minnesota state’s largest city of Minneapolis on 25 May has diminished but not fully subsided five months later.

Even so, it is rare that U.S. elections threaten to go off the rails in a way that calls into question the capacity and resilience of the country’s democratic institutions, or that suggests the use or threat of force might influence the outcome. A recount in the contested 2000 race between the two major parties’ candidates – Democrat Al Gore and Republican George W. Bush – was marred when conservative protesters swarmed ballot counters in Florida’s Miami-Dade County. But little more than contained outrage came of that incident. Bush in effect won the race when the Supreme Court halted the recount and Gore conceded. Beyond that, commentators tend to reach back to the 1876 contest between Democrat Samuel Tilden and Republican Rutherford B. Hayes for the nearest analogy to the present. Then, four states sent rival slates of electors to the Electoral College, the body constitutionally charged with choosing the president. The resulting deadlock broke only when Tilden agreed to step aside in exchange for a fateful deal to pull federal troops out of the South and abandon the protection of recently freed slaves, spelling the beginning of the segregationist Jim Crow period.

The U.S. is facing a level of social and political upheaval that it arguably has not seen since the 1960s.

So, what makes 2020 different? Simply put, it is the way the risk factors add up. The country is facing a level of social and political upheaval that it arguably has not seen since the 1960s. The major parties are polarised over profound questions of national identity, with many Democrats seeing it as a make-or-break moment for the country’s commitment to democratic norms and many Republicans viewing Trump as a bulwark against cultural and demographic changes that they worry are fundamentally altering the nation’s character. A massive COVID-19-driven shift to mail-in voting will likely create openings for contestation, and given the perceived stakes, both sides can be expected to fight any dispute to the hilt. In that scenario, convoluted U.S. election laws could lead to months of tense indecision.

Also a potential factor is the gathering threat of armed right-wing groups, cells and actors, like those caught in early October plotting to kidnap Gretchen Whitmer, the Democratic governor of Michigan state. Such groups could mobilise to intimidate voters at the polls or, if the outcome is contested, stir up chaos on the streets. Violent actors from elsewhere on the political spectrum, including anti-authority activists who have sometimes insinuated themselves into otherwise peaceful anti-racism protests over the course of the past year, could meet them there. A clash that disrupts voting in an important district of a “battleground state” like Pennsylvania, Michigan or Wisconsin, whose electoral votes might determine the election, could escalate quickly.

The primary factor that makes risk calculations different this year is President Trump himself. There is no precedent in modern U.S. history for the president’s toxic rhetoric.

Still, the primary factor that makes risk calculations different this year is President Trump himself. There is no precedent in modern U.S. history for the president’s toxic rhetoric – which routinely calls for the jailing of political opponents, gives what has appeared to be winking support to white supremacists and is laced with martial referencesthat arguably seem to call his supporters to arms. But perhaps the main reason that the U.S. press and civil society have focused so intently on the possibility of violent unrest amid the election is that Trump himself has refused to commit to leaving office peacefully, and suggested that he could lose only if the election were rigged.

Jarring as this picture is, there are still good reasons to believe that the U.S. could make it through this difficult moment without a spike in potentially destabilising violence. Some of these are structural – an apolitical military that will almost certainly resist attempts at unlawful direction and a vibrant press and civil society that afford a meaningful check on executive power. Other elements are circumstantial: perhaps most important, leaders from both parties (including, notably, senior Republican leaders) have signalled publicly that they believe their candidate could lose. The more voters believe in the possibility of a legitimate loss, the less persuasive demagogic accusations of vote rigging are likely to be.

But the land is too dry to risk stray sparks. Under the circumstances, the responsibility of all officials at every level of government, of foreign partners, of civil society and of the media should be to anticipate sources of friction and grievance within the voting public and move quickly to address them. In the limited time that remains before the election, state and local governments should acquaint themselves thoroughly with the legal tools at their disposal and, with support from civil society, use them as needed so that voting and ballot counting can proceed in an orderly fashion without duress. Traditional and social media should take extra precautions not to pronounce winners prematurely, particularly in “battleground states” where margins are likely to be thin. They must not provide a platform for candidates to declare themselves victors before the outcome is known, or proliferate pernicious disinformation; some have taken steps in this direction, but the challenge will require constant management. Foreign heads of state should refrain from offering their congratulations until the institutional process has run its course, regardless of any potential pressure from the U.S. to do otherwise. If events take an ugly turn, both domestic political and foreign leaders with easy access to Trump and his inner circles should tell them privately and publicly that they will have no support if they try to interfere with tabulation of results or, should they lose, the peaceful transfer of power.

In the interim, U.S. political leaders at every level should follow the lead of the two Utah state gubernatorial candidates, who recorded a public service announcement in which they jointly commit to peacefully upholding the democratic process. Ideally, more Democratic and Republican leaders would get together ahead of the vote to make similar public pledges.

The failure of democratic institutions to deliver a peaceful election and, depending on the result, transfer of power in the United States would be bad for the American people, for the country’s governance, for the nation’s credibility and thus its influence abroad, and for foreign partners who (even after four years of Trump) still turn to the U.S. for a measure of stability and security. With luck, and perhaps a little help from its friends, the U.S. could still dodge this bullet and emerge ready to begin repairing the social fractures that have helped bring it to this dangerous place.

Click here for a PDF copy of this statement. International Crisis Group will be publishing a more detailed report on this issue next week.