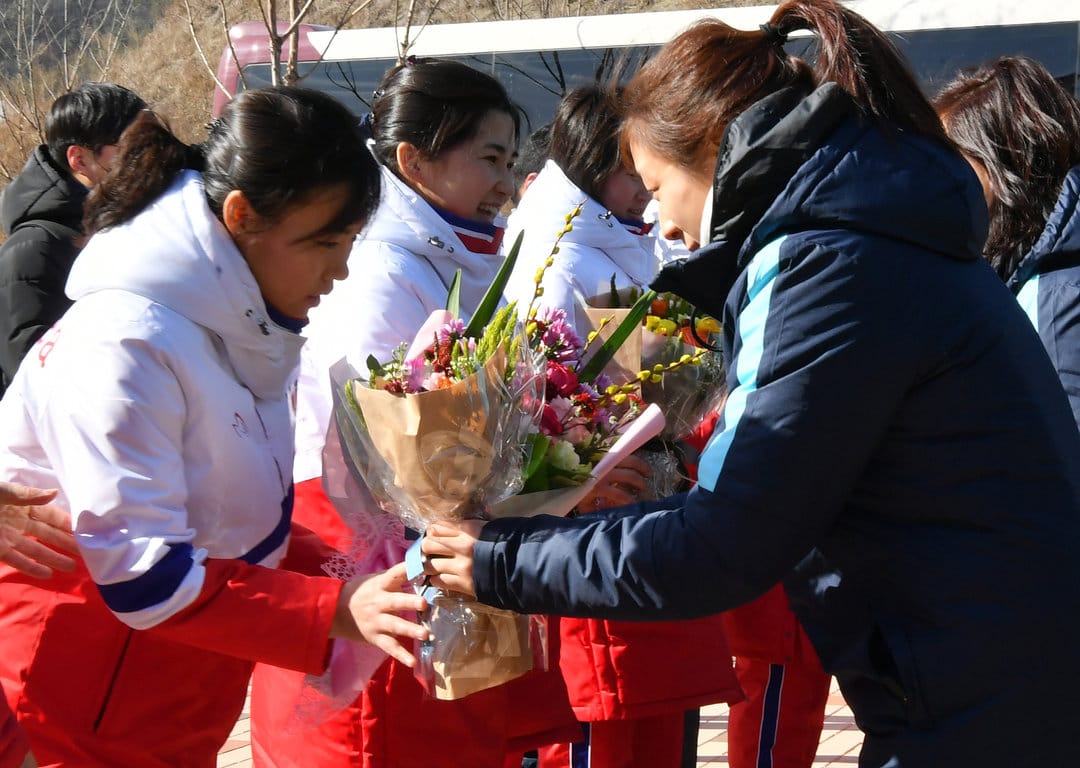 Members of North Korean women's ice hockey team (in white and red) are welcomed by members of the South Korean team (in blue) as they arrive at South Korea's national training centre in Jincheon on 25 January 2018. Song Kyung-Seok / POOL / AFP
Commentary / Asia 08 February 2018

Sports Diplomacy in the Korean Peninsula

The opening of the 2018 Winter Olympic Games represents an opportunity for diplomacy to help reduce tensions on the Korean Peninsula.

North Korea’s decision to dispatch Kim Jong-un’s younger sister Yo-jong to South Korea (Republic of Korea, ROK) as part of a delegation to the PyeongChang Winter Olympics has opened up the possibility for the past month of sports diplomacy to garner something more substantive and lasting. With all parties to the Korean peninsula conflict sending senior delegations to South Korea for the Games, everyone should take a moment to give diplomacy a chance.

Kim Yo-jong’s visit is one outcome of high-level talks between the two Koreas during January, a process that started with Kim Jong-un using the annual North Korean leader’s address on 1 January to call for a successful New Year for both Koreas. This year sees not only the Winter Olympics but also the 70th anniversary of the Democratic People’s Republic of Korea’s (DPRK) founding as a separate state (it is also the 70th anniversary of the founding of the Republic of Korea (South Korea), but predictably Kim didn’t mention that).

Kim Jong-un’s younger sister Yo-jong ... will have the greatest degree of authority, despite her young age.

The DPRK high-level delegation will be led by Kim Yong-nam, the nominal head of state, who also attended the Beijing Summer Olympics in 2008 and the Winter Olympics in Sochi in 2014; as such his leadership of the delegation is unremarkable. It will also include Choe Hwi, who chairs the DPRK National Sports Guidance Committee, and Ri Son-gwon, the chair of the Committee for the Peaceful Reunification of the Country who led the North Korean talks delegation on 9 January. However, it is Kim Yo-jong who will have the greatest degree of authority, despite her young age.

The situation is reminiscent of a 2002 visit to South Korea by an economic delegation from North Korea. Though nominally led by the head of the ruling party’s finance and planning department, Pak Nam-gi, the power on the delegation was clearly in the hands of Jang Song-taek, an authority that stemmed primarily from his marriage to Kim Jong-il’s sister. Jang was judged in need of political re-education upon his return; he had supposedly gone weak at the knees in the face of South Korean capitalism. If he isn’t careful, Kim Yong-nam could face a similar charge. Indeed, so could any other North Korean official. But immunised by her bloodline, Kim Yo-jong need fear no such thing.

As Crisis Group laid out in two January reports, cynicism about North Korean motivations is understandable. Pyongyang’s strategic goals centre on disrupting the ROK-U.S. alliance and the international consensus on sanctions against North Korea, as well as sowing division in South Korean society over how best Seoul should cope with its northern neighbour. The decision to designate 8 February as the founding day of the North Korean armed forces and commemorate it with a military parade through the streets of Pyongyang was partly motivated by domestic considerations. But it shows that despite North Korea’s participation in the Winter Games, Pyongyang will only go so far in accommodating President Moon Jae-in’s desire to host a “Peace Olympics”.

There is also a domestic political motivation for the forthcoming visit, which mirrors the sudden arrival of a North Korean delegation in the South Korean city of Incheon at the culmination of the 2014 Asian Games. There, when the dust settled, it became clear that the delegation’s primary goal was propaganda: Kim Jong-un had sent senior regime officials to cheer on North Korea’s athletes, and nothing more. Sports and sporting achievement is a key plank in legitimising the Kim Jong-un regime. The North Korean delegation will seek to use its visit to Pyeongchang to score political points not only abroad but also at home; that much is obvious.

The biggest challenge will be the transition from symbolic gestures around the Olympics to addressing North Korea’s nuclear and weapons program or other issues of interest to Seoul and its allies.

Yet the visit of such a senior delegation to South Korea cannot be dismissed. This is the kind of political move that South Korea has been working to bring about, and Seoul won’t want to waste it. The biggest challenge will be the transition from symbolic gestures around the Olympics to addressing North Korea’s nuclear and weapons program or other issues of interest to Seoul and its allies. Korea has seen more than a few false starts before; joint marches of North and South Korean athletes at the opening ceremonies of the 2000 Olympics in Sydney and the Athens Games four years later did not lead to any discernible progress.

Nevertheless, a conversation on issues not directly related to the nuclear crisis is an opportunity. As such, the biggest questions raised by the North Korean delegation are those for the U.S. Ever since North Korea launched its January diplomatic outreach, Washington has been walking a fine line between giving space for inter-Korean dialogue, keeping open the door to meetings with North Korean officials, and maintaining pressure on Pyongyang to bend to the will of the international community over its nuclear and missile programs.

The result has been unedifying at best, and although the visit of Vice President Mike Pence to Pyeongchang is not necessarily a deliberate attempt to undermine inter-Korean dialogue, it increasingly is looking like one. Even as Pence and Secretary of State Rex Tillerson held out the possibility of meeting North Korean officials, Pence said he would use his presence at the Olympics to “make sure that North Korea doesn’t use the powerful symbolism and the backdrop of the Winter Olympics to paper over the truth about their regime”. He further revealed on 7 February that the U.S. would soon “unveil the toughest and most aggressive round of economic sanctions on North Korea ever”, and declared, somewhat predictably, that “all options remain on the table”. As an attempt to add fresh heft to a sanctions regime that may be succeeding at last in clamping down on North Korea’s inflows of hard currency, further economic sanctions are a logical extension of U.S. policy, but the timing is terrible.

The symbolism of recent U.S. actions is also questionable under the circumstances. It is laudable that President Trump would invite the family of Otto Warmbier to his state of the union address on 30 January, and even more so that he would signal respect for the hundreds of brave people who escape North Korea annually by hailing a prominent defector, Ji Seong-ho, during his speech. Equally, the visit of a group of North Korean defectors to the Oval Office on 2 February sent a powerful signal to Pyongyang about the importance of curtailing its wanton abuses of human rights.

To play the appropriate role in Pyeongchang, Pence should limit resort to symbolic steps that inevitably will provoke the North Korean regime, not intensify the pressure of sanctions, and open his ears to what North Korea has come to the Winter Olympics to say.

However, sending the same message a second time by bringing Mr. Warmbier to the opening ceremony of the Winter Olympics could negatively affect any potential diplomatic opening. Equally, the Pence delegation’s decision to visit a memorial to the 46 sailors who died in the ROKS Cheonan, a South Korean naval vessel sunk by a North Korean torpedo in 2010, is hardly likely to put Pyongyang in the mood to compromise. Such a visit would ordinarily signal American respect for the loss of life incurred during a previous period of heightened inter-Korean violence, and as such would be welcomed. Yet the Moon administration does not really need American condolences at this particular moment. What it needs is a flexible partner in Washington that is willing to signal firm alliance resolve while giving Seoul space and allowing inter-Korean diplomacy run its course – with the plausible expectation that this may result in U.S.-North Korea dialogue later. This is the bare minimum for inter-Korean dialogue to bear fruit. To play the appropriate role in Pyeongchang, Pence should limit resort to symbolic steps that inevitably will provoke the North Korean regime, not intensify the pressure of sanctions, and open his ears to what North Korea has come to the Winter Olympics to say.