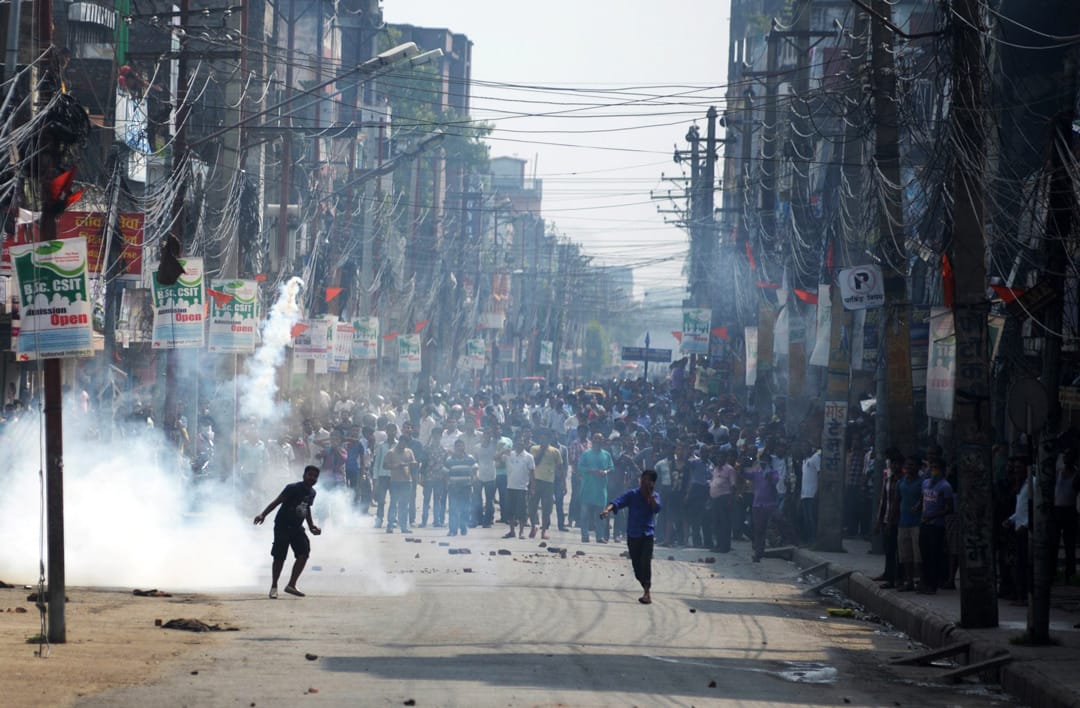 Spiralling protests against a draft constitution have left 23 dead and hundreds injured in Nepal in two weeks. An over-militarised security reaction and inadequate political response from the centre threaten to fuel deep-seated ethnic, caste and regional rivalries less than a decade after the civil war’s end. The major parties should recognise the depth of discontent and the fundamental challenge this poses to the legitimacy of the proposed constitution. A hastily-passed document, weeks after mobilisation of security forces to counter citizens’ protests against it, is unlikely to be the social contract Nepal needs.

The constitution, nine years in the making, was envisioned as an instrument to address longstanding grievances of large parts of society, who argue that the old system marginalised them from state institutions and political authority, deprived them of a fair share of the benefits of development and discriminated against them. These groups include plains-based Madhesi, Tharu and smaller groups, Dalit caste groups in the hills and plains, hill ethnic Janajati (“indigenous nationality”) groups and women. Many have concluded that the 8 August draft does not adequately deliver on commitments to a federal system and inclusion.

The government and its opposition partners in the constitution deal say they are under pressure to end years of uncertainty by passing the draft quickly. They downplay the significance of the protests, arguing that not everyone in a democracy can be satisfied and that the constitution can be amended. The state response to the protests has been security-heavy and in some areas, the army has been mobilised to deal with civic unrest for the first time since the civil war.

Kathmandu circles underestimate the scale and intensity of disagreement and the complexity of the often-competing grievances and claims. There are high-voltage public debates over disadvantage and structural discrimination that feed social resentments and grievances. These deeply-felt issues will continue to find expression in agitation and opposition if the present moment is handled badly. A botched solution risks entrenching communal polarisation in society and radicalising groups that feel their concerns were not seriously considered.

Reconciling the expectations of all Nepalis was always going to be a challenge for the Constituent Assembly. The 2006 Comprehensive Peace Agreement between the then Maoist rebels and representatives of political parties, as well as the 2007 Interim Constitution, promised political reform and redress for past inequities. Numerous social groups based on caste, gender, ethnicity, and regional interests lobbied for their agendas. Often, movements turned violent to force the government to take them seriously. Since 2007, governments have signed over 40 agreements, often contradictory, with different groups.

The recent violence was mainly sparked by delineation of the six-, now seven-state federal structure proposed to replace 75 administrative districts. Tarai-based groups wanted to keep stretches of the southern Tarai plains together, including by changing the traditional north-south administrative divisions, which mixed plains, hills and mountains in administrative zones. In the hills, some Janajati groups want to keep areas traditionally considered homelands intact, though this is not a focus of protests. Other issues are also highly contentious though not explicitly part of the current demands: a proposed citizenship measure which makes it difficult for children with a single Nepali parent to gain citizenship with the same rights as those who receive citizenship by descent; and the proposed electoral system and standards for demarcating constituencies, which may not deliver better representation of the agitating population groups.

Madhesi communities, one of the country’s biggest population blocs and the largest group across the Tarai, and Tharu communities, many concentrated in the far-western Tarai, say the current system puts them at a demographic disadvantage politically. They anticipate gains under the new system but object to some parts of the plains being included in hill states. Traditionally hill-based communities, and the framers of the draft constitution, counter that migration continues from hills and mountains to the Tarai, forming mixed communities, and that hill community members have land or commercial ties to the disputed areas. Madhesi and Tharu groups believe the major parties want to renege on the letter and spirit of earlier commitments to political empowerment and reform.

Within the Constituent Assembly, which functions as the parliament, there is discontent. The governing coalition consists of the Nepali Congress (NC), the Communist Party of Nepal-Unified Marxist Leninist (UML) and the Madhesi Janadhikar Forum-Democratic (MJF-D); its opposition partners in the constitutional deal are the Unified Communist Party of Nepal-Maoist (UCPN-M). The MJF-D last week said it could no longer support the deal if Tharu concerns were not addressed. The NC and UML have forbidden their members from trying to amend the draft; 33 smaller parties have refused to be part of the process, and the oldest Madhesi party, Sadbhavana, resigned from the Constituent Assembly last month.

There are protests and agitation in much of the Tarai. Kailali district in the far west, parts of which Tharu groups and the hill-based Undivided Far West Movement want for their respective new states, had the worst violence last week. The major parties revised the federal model to add a seventh state in response to the latter’s demands. That added to the discontent of Tharu groups, considered among the most historically marginalised in Nepal, who said their grievances were ignored as they lacked close ties to Kathmandu power centres.

Since the protests began three weeks ago, at least fifteen people have been killed by police in various parts of the country. On 24 August, seven police and a child were killed in an apparent attack by protesters in Kailali’s Tikapur town. Kailali remains under a 24-hour curfew. Given restrictions on movement, it is difficult to verify reports of significant displacement of Tharu families fearing or following retaliatory violence. Birgunj city and areas in the central Tarai are tipping into serious violence, with nine people killed by police this week. The National Human Rights Commission has not officially investigated any of the deaths. The army has reportedly been mobilised at different times in Kailali, Dang, Parsa, Rautahat and Sarlahi districts. There are concerns about communally driven violence and about the state’s response. An indefinite banda (strike) across the Tarai is in its third week.

It is unlikely the discontent can be resolved by a deal between power-brokers in Kathmandu that does not address core issues. While some district-level political leaders and parties that represent Tharu and Madhesi groups in the Constituent Assembly have been involved in the protests or support them, the mobilisation and leadership comes largely from within local communities. Many of the protests do not involve huge numbers, but rely instead on better organisation and target the shutdown of specific infrastructure, such as government offices and stretches of the national East-West highway.

The government must act urgently to address tensions, reduce the risk of more violence and to restore confidence in the constitution-writing process. The enormous trust deficit between agitating groups and Kathmandu’s political leadership will worsen if the government and major parties persist with a heavily securitised response to fundamentally political protests, and if they and the media portray the protests as marginal or criminal. The government should also urgently form an independent commission to investigate the recent killings.

All protesting groups must denounce and guard against violence from within their ranks, and avoid threatening or extreme rhetoric. They must also offer realistic alternatives, not just reject Constituent Assembly proposals.

The major parties say they are open to amendments and willing to talk to any group that feels it has been excluded. The government in early August conducted a four-day exercise to obtain feedback on the draft, though there is a public perception it will ignore suggestions that do not fit the current draft’s form.

The timing, sequencing and design of talks will be challenging. It is essential the government does not insist on artificial deadlines or preconditions and is ready to discuss the status of past commitments. The agitating groups are wary of being forced into an accelerated timetable within the Constituent Assembly. The government anticipates speaking to each agitating front separately, but Tharu and Madhesi groups may seek a joint negotiation. Small adjustments to the proposed boundaries of states in the far west and east would significantly lower tensions but are strongly resisted by some leaders.

Tenor will matter as much as issues. If there are more deaths and if groups feel negotiations are not respectful or in good faith, this could jeopardise confidence in other contentious compromises on citizenship, the electoral process, the number and distribution of constituencies, the threshold for political parties, representation and inclusion.

The anger in the Tarai and among various social groups is real. If it is ignored or mishandled, the violence will grow. If the new constitution is truly to be one for all Nepalis rather than a starting gun for new forms of conflict, its framers must recognise that getting it done right is more important than getting it done fast.