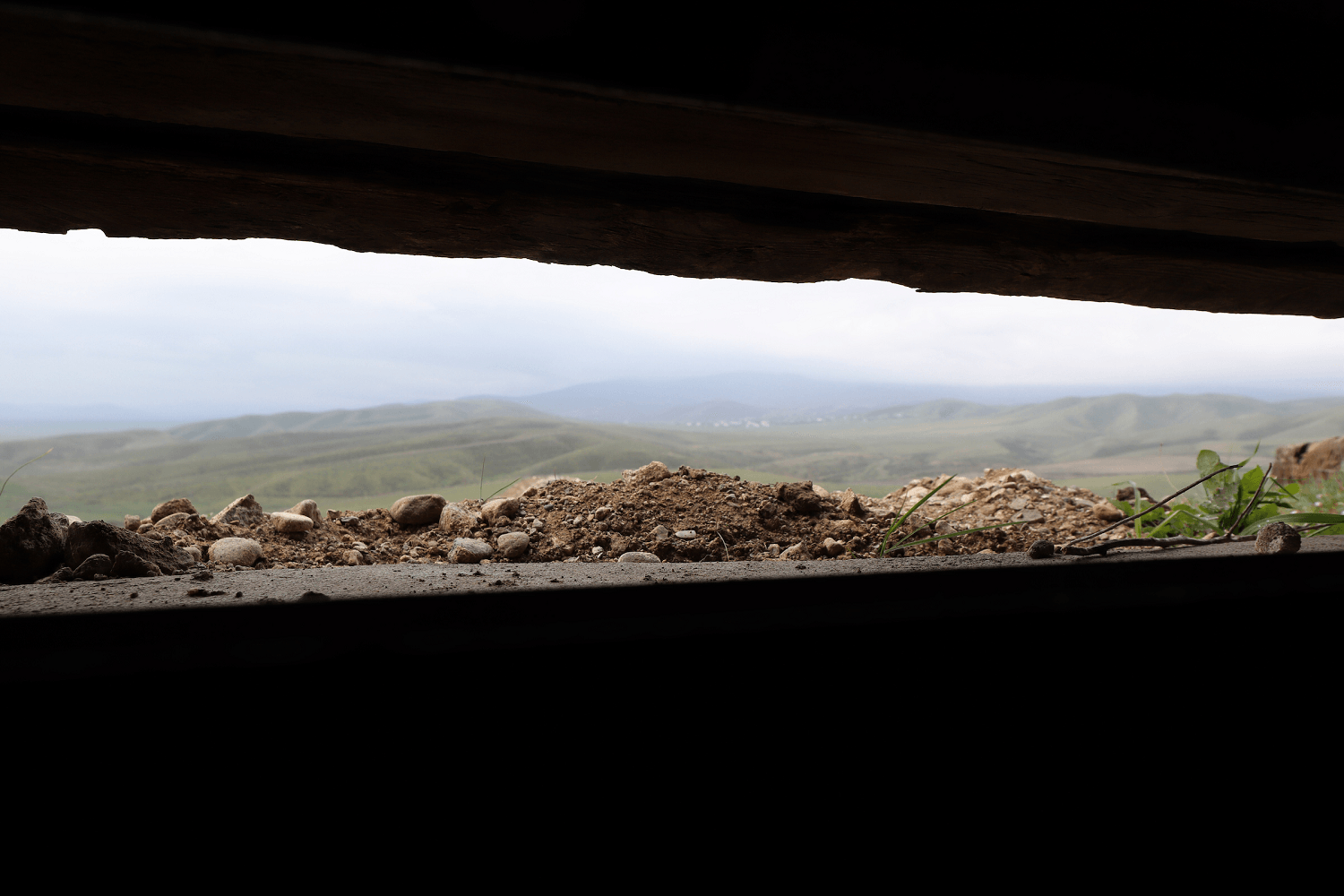 The Nagorno-Karabakh Conflict: A Visual Explainer

From 1994 until 2020, intermittent deadly incidents, including the use of attack drones and heavy weaponry on the front lines and activities of special operations forces, demonstrated the ever-present risk that war would reignite. In April 2016, four days of intense fighting at the line of separation shook the region, killed hundreds on both sides, and foreshadowed what was to come.

The dam broke in September 2020, and full-fledged war resumed on the 27th of that month. Six weeks of bloody armed conflict finally ended in the early hours of 10 November with a ceasefire brokered by the Russian Federation. Although the deal fell short of a clear and stable peace, it brought an end to the deadliest fighting the region had witnessed in nearly three decades with over 7,000 military and about 170 civilians killed and many more wounded. Under the agreement, Azerbaijan now again controls in full the seven districts adjacent to Nagorno-Karabakh that Armenian forces had held since the previous war. It also holds a substantial part of Nagorno-Karabakh itself. The rest is patrolled by a Russian peacekeeping force but still governed by self-proclaimed local authorities.

This Visual Explainer has been designed as a resource for those seeking to understand this conflict. It is also intended as a tool for policymakers and others involved in the peace process or in mitigating the conflict’s humanitarian impact. It includes sections that explain the current state of the conflict along with some parts that describe the situation before the 2020 war:

Since the 2020 war Crisis Group has tracked fatalities and detentions that take place along the front lines.

A man shepherds his cows near a rocket case left by the 2020 war in Nagorno-Karabakh. REUTERS/Artem Mikryukov

After the 2020 war, the front line has become longer and more volatile than before. Opposing military positions are separated from one another by only 30-100 metres. Before the 2020 war, they were hundreds of metres apart. The front line’s movement has placed military positions up against civilian settlements. The Russian peacekeeping mission’s outposts are deployed along the main roads in Armenian-populated areas of the conflict zone and the main traffic artery between Armenia and Nagorno-Karabakh, including inside the Lachin corridor. The joint Russian-Turkish monitoring centre established as part of the November 2020 agreement, sits in Azerbaijani territory about 20km from the front line.

Click on casualty locations (brown dots) to see more detail about each incident, including numbers of combatants and non-combatants dead or injured.

Crisis Group developed this interactive map to track the geography of casualties along the front lines and deeper inside the Nagorno-Karabakh conflict zone. Casualty data includes deaths and injuries of Armenians and Azerbaijanis from exchanges of fire along positions, sniper shots along with mine explosions in the conflict zone and along the front lines, aggregated monthly. All of these are plotted on a map which includes front lines before and after the 2020 war, drawn using satellite imagery, and the NKAO, as defined by Soviet-era maps. The Lachin corridor is presented as defined in current official maps published by the Russian peacekeeping mission to Nagorno-Karabakh.

In addition to the casualties reflected on this map, Crisis Group is aware of at least one Russian military fatality and one non-fatal injury since the deployment of the Russian peacekeeping mission to Nagorno-Karabakh in November 2020.

Most combatant injuries occur along the front lines due to  exchanges of fire and mines triggered in the conflict zone.

Mine explosions have become the predominant cause of injuries  to non-combatants, including civilians living in or visiting the conflict zone and staff of civilian agencies operating in the area.

The current front line crosses civilian settlements and nearby areas. When local residents or the military intentionally or unintentionally cross the line to the other side, they often get detained. This interactive map reflects geographical patterns in the detentions of combatants and non-combatants on both sides of the conflict. Detentions reported last from several hours to many days and months.

Click on the detention locations (brown dots) to see more detail about detentions of combatants and non-combatants along the front lines inside Nagorno-Karabakh and along the Azerbaijani-Armenian state borders.

What happens on the front lines depends in part on what officials say and do in regional capitals and around the world - and vice versa. This timeline of events charts key developments in the peace process, including meetings and political statements made by the conflict parties, mediators and other foreign actors since 2015. It includes periods of relative calm as well as those of escalation and conflict. Domestic political events are included when they have bearing on the conflict’s dynamics.

The data presented in this section were based on reports by the Azerbaijani and Armenian ministries of defence, the de-facto Nagorno-Karabakh authorities and media on all sides. Crisis Group only included reports of fatalities and wounded in this dataset if it could establish through official or media reports, the identities of those killed or injured. Military casualties included contracted soldiers and conscripts, along with border guards deployed along the front lines. Most civilian casualties occurred near the front lines or were caused by mines installed close to military positions. The bar charts show the breakdown of military and civilian casualties by nationality.

Before the 2020 War: Visualising the Data

Servicemen attend Sunday service at Gandzasar monastery in May 2017. CRISISGROUP

Crisis Group analysts collected data regarding incidents reported by Azerbaijan, Armenia and de facto Nagorno-Karabakh authorities in the conflict zone between 1 January 2015 and 26 September 2020, including both incidents that resulted in casualties and those that did not. Analysts cross-checked these reports against open source media reports.

Both sides built up their arsenals in the years prior to 2020, including with the purchase of attack helicopters, fighter planes, surface-to-air missiles, anti-tank artillery systems and long-range mortars. Crisis Group tracked the use of such heavy weaponry.

Since April 2016, both sides used kamikaze drones and drones for surveillance.

The datasets above do not include information from the escalation that took place 2-11 April 2016. It began early in  the morning of 2 April 2016 with clashes between Armenian and Azerbaijani forces along the line of separation. These then flared into outright fighting. Although Russia helped broker a ceasefire on 5 April, ending the worst of the violence, flare-ups continued through 11 April. The escalation left Azerbaijan in control of slightly more territory in the former NKAO and the adjacent territories for the first time since 1994’s ceasefire.

The spring of 2016’s fighting killed hundreds of people. However, exact numbers of dead and wounded remain disputed to this day. Because we do not have reliable data on casualties, we have not included the time period from 2-11 April 2016 in our datasets for 1 January 2015-27 September 2020, above.

A gate riddled with bullet holes near the front line. CRISISGROUP

Crisis Group has generated a timeline of political developments and several datasets by collecting information regarding  casualties, detentions and incidents (uses of drones, heavy weaponry and special operations) reported in open sources in Armenia, Azerbaijan and the de facto Nagorno-Karabakh entity from 2015 onward.

The timeline of events includes:

You can view and download the Timeline entries here.

Crisis Group has used Armenian and Azerbaijani government websites, de facto Nagorno-Karabakh sources and online media outlets in Baku, Yerevan and Stepanakert to collect reports of casualties, detentions and incidents. The availability and specificity of data differs among the areas affected by the conflict. For specific time periods (in particular during the flare-up of fighting between 2 and 11 April 2016 or during the 2020 war), data is limited, disputed, or unavailable. Due to the lack of accurate data and because we judge the events of early April 2016 to represent an escalation, rather than interwar incidents, Crisis Group chose to exclude that period from our datasets.

In counting casualties and detentions, Crisis Group has only included those killed,wounded and detained whom we could identify by name, using statements by Armenian, Azerbaijani and de facto Nagorno-Karabakh authorities, media reports and/or social media postings for basic biographical data, unique photos/video footage and funeral reports.

Crisis Group’s datasets, upon which this Visual Explainer is based, are available here. We value feedback, which will be considered in updates to the Visual Explainer and other data visualisations. Please send information and inquiries to NKVisualExplainer@crisisgroup.org.

Crisis Group traditionally uses geographical names from the pre-conflict period of the late Soviet times. The borders of the NKAO were delineated in line with the latest maps of the General Staff of the Soviet Defence Ministry. The front lines reflect locations of military positions and trenches visible in satellite imagery available in early 2021. The geography of the Lachin corridor reproduces that in the publicly available official map of the Russian peacekeeping mission to Nagorno-Karabakh of the summer 2021 period.

Front line(s): the line(s) that separate(s) Azerbaijani soldiers from the local Armenian forces of the de facto Nagorno-Karabakh defence ministry and the Armenian and Azerbaijani armies and armed forces along the state borders of these two states.

Non-combatants: civilians  identified by name by representatives of the conflict parties or in media reports. Civilian casualty counts include civilians killed and wounded along front lines and by mines laid deep in the conflict area as early as the first war in Nagorno-Karabakh. In addition to ordinary residents, non-combatants include civilian state agency staff engaged in demining and other activities.

Combatants: Azerbaijani and Armenian armed forces, special police troops and border guards. We are not presently maintaining a consistent count of casualties among the  Russian military contingent present in Armenia or Nagorno-Karabakh or of any other foreign visitors.

Reports of detentions: official statements, media reports or confirmed social media reports of combatants or non-combatants detained by the opposing side during the interwar periods along the front lines. Reported detentions range from several hours to weeks on end.

Special operations: crossings of the front line by Azerbaijani or Armenian forces.

Drone use: drones used for reconnaissance or strikes in the conflict zone.