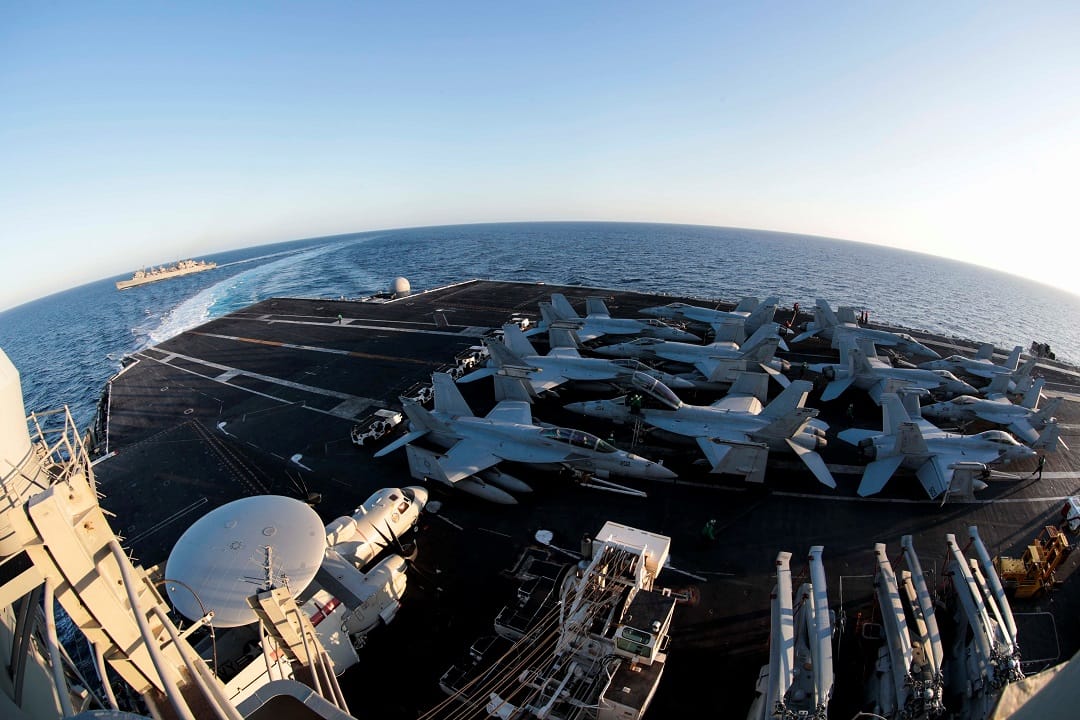 Taking the U.S. and Iran Off Collision Course

A series of escalations in both word and deed have raised fears of U.S.-Iranian military confrontation, either direct or by proxy. It is urgent that cooler heads prevail – in European capitals as in Tehran and Washington – to head off the threat of a disastrous war.

For the past year, relations between the U.S. and Iran have brought to mind a slow-motion train wreck. Of late, the pace has dangerously accelerated, and tensions could soon lead to a catastrophic collision. A crash is not inevitable, but it could well occur – deliberately or as a product of miscalculation – unless both parties and outside actors take urgent steps to slow way down or switch to another track.

On 12 May, four oil tankers off the coast of Fujaira, a port in the United Arab Emirates on the Gulf of Oman, were hit by apparent sabotage. Two days later, drones attacked two oil pumping stations along the East-West pipeline in Saudi Arabia between the capital Riyadh and the port city of Yanbu. These two separate events may or may not be linked, may or may not involve Iran, and may or may not provoke a response. But, coming against a backdrop of significant escalation between Washington and Tehran, they represent ominous warning signs.

In the past few weeks, the Trump administration has doubled down on its efforts to strangle Iran’s economy. Not content with having unilaterally withdrawn from the 2015 nuclear deal, it is now pushing to reduce Iran’s oil exports to zero. It has designated the Islamic Revolutionary Guard Corps as a foreign terrorist organisation. It has also started to flex its military muscle by deploying warships, bomber jets and missile defence batteries to the Middle East to counter unspecified “Iranian threats”.

Tehran has not remained passive. It has labelled U.S. forces in the region as terrorists; downgraded its compliance with the nuclear deal, warning of further steps unless the deal’s remaining parties deliver tangible economic benefits; threatened to shut the Strait of Hormuz, a chokepoint for the global oil and gas trade; and pledged to retaliate against any attack upon its assets or interests. Without offering proof, U.S. officials claim that Iran has also given licence to its regional proxies to target U.S. interests, suggesting that such an attack could occur in Iraq or one of the Gulf monarchies allied to Washington. In a worrying move, on 15 May it ordered the departure of non-essential U.S. personnel from Iraq.

Escalation comes easily; de-escalation is a much taller order, especially in the absence of direct channels of communication that can pre-empt misunderstandings or miscalculations.

All this ratcheting-up of tension was entirely predictable, and most of it is entirely provoked by the U.S. With Iran having increasingly less to lose as a result of U.S. sanctions, which are eating away at its already weak economy, it was virtually bound to become less risk-averse in the nuclear realm and more aggressive in the region. For months now, the more hardline elements of the Islamic Republic have been urging the leadership to impose a cost on the U.S. in order to deter it from stepping up sanctions and to show that, if the U.S. could hurt Iran, so too could Tehran wound Washington.

Perhaps these actions are a prelude to negotiations: the U.S. is exerting “maximum pressure”, it says, to bring a more compliant Iran back to the table; in like manner, should Tehran conclude that it has no choice but to reach a new deal with Washington in order to relieve unsustainable economic strain, it will want to enter such talks with a stronger hand. Resuming its nuclear activities, making its presence felt in the region, and disrupting Saudi or Emirati oil exports could all be ways of enhancing its bargaining power. But if these manoeuvres are a diplomatic game, it is a dangerous one: either side could misinterpret the other’s intentions. Any Iranian move could easily lead to U.S. and/or Israeli strikes which, in turn, could lead to an Iranian counter-response. Or vice versa. Escalation comes easily; de-escalation is a much taller order, especially in the absence of direct channels of communication that can pre-empt misunderstandings or miscalculations.

In short, whether or not Tehran was directly or indirectly behind the recent attacks (the Huthis in Yemen claimed responsibility for the attacks in Saudi Arabia; the earlier offshore incident has gone unclaimed; Iran has denied any connection to the incidents and called for an investigation), and whether or not Washington is manufacturing accusations to justify a spike in military activity, all the ingredients for an escalation are present. Even assuming that neither side seeks war, growing friction at all the flashpoints between the two sides (see our Trigger List early-warning platform) mean that intentions may not suffice to prevent it. The consequences could be calamitous for states and peoples in the immediate region, but also for the international economy, given its high dependence on the free flow of oil from the Gulf.

Iran should reciprocate by returning into full compliance with the nuclear deal.

It is not too late to avert this outcome. Key to de-escalation will be the ability of the remaining parties to the nuclear deal to give Iran an economic reprieve. In particular, Europe could shed its reluctance to indirectly import Iranian oil in partnership with Russia and China. If Russia swaps oil with Iran and China continues to import Iranian crude, the transactions would generate credit that the parties could inject into Europe’s special purpose financial vehicle (Instex), allowing Iran to engage in trade with these countries without access to the U.S.- dominated global financial system. These countries could also provide Iran with development aid to repair and renew its infrastructure. With Europe demonstrating willingness to go the extra mile, Iran should reciprocate by returning into full compliance with the nuclear deal. It also should exhibit restraint on the regional front and refrain from steps – direct or taken through partners – that could provoke its foes.

As for President Donald Trump, he faces a choice. Everything about his 2016 presidential campaign pointed in the direction of avoiding another costly and unnecessary military entanglement in the Middle East. So, too, does much about the vows he has made to his constituency since entering office. But everything about his administration’s policy toward Iran points in a strikingly different direction: toward war, by design or mistake. He says he wants the U.S. and Iran to talk. Yet he should know that the Islamic Republic will not start a dialogue if it feels it has a gun to its head; it will respond to perceived aggression in like manner, and that response could in turn engender an uncontrollable downward spiral. A back-channel dialogue eventually may be possible, but for that the U.S. ought to tone down its rhetoric and offer the Iranian leadership an off-ramp, for example by signalling its preparedness to put aside its maximalist demands and to find a mutually acceptable compromise.

President Trump might think that time is on his side, as sanctions continue to take their toll on the Iranian economy. But the wait-and-see period may have reached the end of its natural life. A crisis that he may not want but that some of his advisers may not mind lies just around the corner. It is past time for cooler heads to prevail and for all to move decisively to take the trains off collision course.