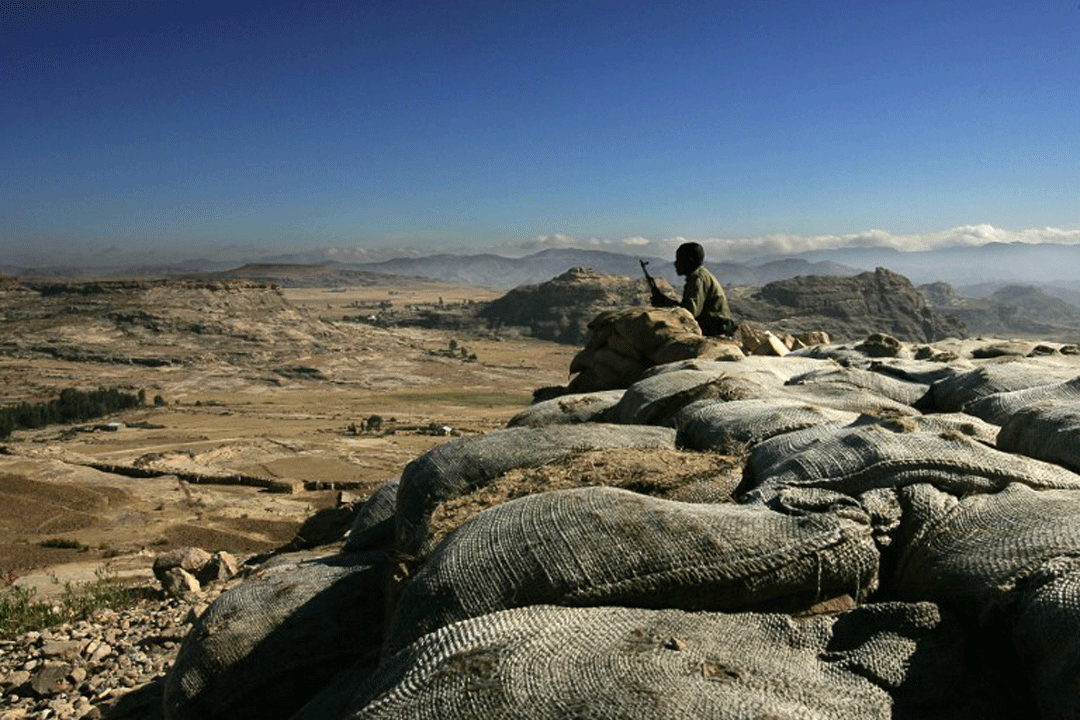 A Wake-up Call for Eritrea and Ethiopia

A 12 June clash between Eritrea and Ethiopia comes as the Horn of Africa’s two most implacable rivals face a crossroads.

As Asmara seeks ways out of its long isolation, and Addis Ababa seeks to maintain and expand its role on the global stage, they and their partners would be wise to turn this new outbreak of violence into an opportunity to seek a compromise settlement to their long-running border dispute. Otherwise the risk remains of sinking into a destructive new round of conflict in which both would lose.

Details are hazy and contested, but the fighting near the border town of Tserona appears to be the most serious conventional military engagement for some time. Despite the impression of a frozen conflict since the 1998-2000 war that killed an estimated 70,000 people, there have been at least eight significant flare-ups since 2011, often involving rebel groups sponsored by one or the other of the two belligerents. Indeed, one theory for the Tserona clash is that it is a response by Addis Ababa to an armed action by the Asmara-linked Ginbot 7 group in southern Ethiopia in May.

Recent shifts in Eritrea and Ethiopia’s international and regional standing, and relative internal vulnerabilities, may offer opportunity to end the two-decades-long estrangement.

Still, Eritrea has not always been at daggers drawn with Ethiopia, from which it won independence in 1991, especially since both post-1991 governments were led by former rebel fronts that had (mostly) fought together during the 1970s and 1980s. Recent shifts in Eritrea and Ethiopia’s international and regional standing, and relative internal vulnerabilities, may offer opportunity to end the two-decades-long estrangement. 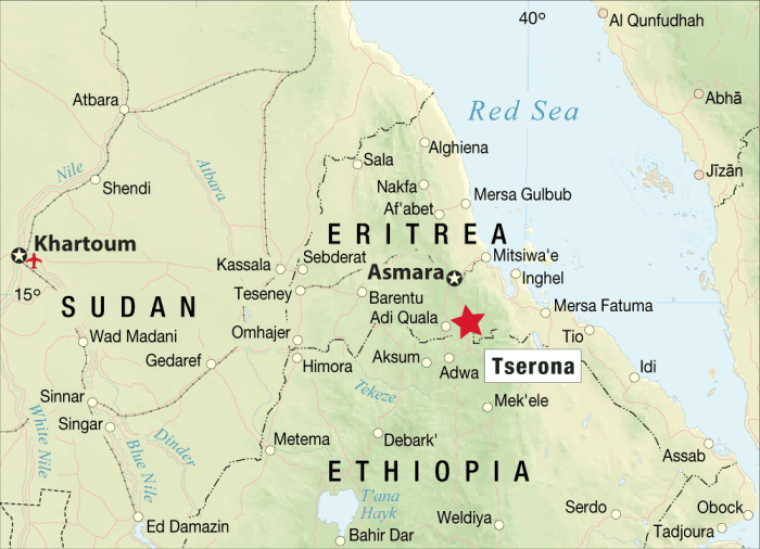 The Eritrean-Ethiopian border. Clashes were reported on 12 June 2016 near the border town of Tserona. CRISIS GROUP

The international community has done very little to push for a resolution of the border issue since 2008, mostly because neither side has appeared to believe it is in their interest to pursue it.

Both sides actions’ have blocked international efforts to end the dispute, despite the Algiers Agreement of 2000 that ended hostilities with both parties’ agreement to binding international arbitration. The Ethiopia Eritrea Boundary Commission (EEBC) ruled in 2002 awarding gains to and extracting losses from both sides, but, in what proved the biggest obstacle to peace, awarding of the original trigger-point of Badme to Eritrea.

Ethiopia refused to implement the ruling without further consultations. Eritrea refused to talk before action on implementation. Faced with losing diplomatic good will in 2004, Ethiopia offered a “Five Point Plan” for negotiations and normalisation of relations; on justifiable legal grounds, but with less diplomatic finesse, Eritrea refused. In late 2007, after Ethiopia had ceased its cooperation with the EEBC, it declared a virtual demarcation and dissolved itself. In 2008, facing increasingly hostile Eritrean deployments in the Temporary Security Zone patrolled by the United Nations Mission in Ethiopia and Eritrea (UNMEE), that too wound down operations.

Diplomats put the dispute on the back burner as other imperatives for regional peace and stability demanded attention, including the resolution of the Sudanese civil war, the Darfur conflict, the independence of South Sudan and attempts to reestablish formal government in Somalia. Nevertheless, Ethiopia and Eritrea’s rivalry has played a complicating role in all of these processes, crises and conflicts.

Diplomats put the dispute on the back burner as other imperatives for regional peace and stability demanded attention.

Even worse, Eritrea’s frustration toward what it perceived as the international system’s failure to pressure Ethiopia into implementing the 2002 border ruling led it to take unilateral initiatives to keep its rival on the back foot. This is reported to have included assistance to the Somalia’s Islamist extremist and al-Qaeda-affiliated Al-Shabaab. Global opinion soon branded Eritrea as a regional spoiler. The international community slapped on sanctions in 2009, included Eritrea in the United Nations Monitoring Group on Somalia and Eritrea in 2010 and then established a United Nations Commission of Inquiry into Human Rights in 2014; its latest report condemning Eritrea’s “systematic, widespread and gross human rights violations” was published a week previous to the Tserona clash.

From 2009, Eritrea was regionally and diplomatically isolated by the sanctions regime, its own decision to “suspend” itself from East Africa’s regional peace and security organisation, the Intergovernmental Authority on Development (IGAD), and its parallel absence until 2011 from the new African Union, based in the capital of its Ethiopian rival.

Internally, losses in the 1998-2000 war triggered a downward spiral. High-ranking officials who criticised the conduct of the war were incarcerated without trial and systemic internal repression became the norm. The country remained on a war footing and the already shaky economy nose-dived. Mandatory and prolonged national service (beyond the official eighteen months) for those aged between eighteen and 40 became an integral part of the state regulation of daily life.

President Isiais Afewerki, a guerrilla leader once lionised by international opinion, looked increasingly belligerent and autocratic in power, with ill-health doing little to improve his humour in public. A growing number of young people chose to leave in search of economic opportunity, as in the rest of the Horn. In Eritrea’s case, youth were particularly anxious to avoid national service and used well-developed paths for refugees and diaspora forged during the 30-year independence struggle.

Ethiopia, meanwhile, was riding high. It had suffered a post-war political crisis which split the regime’s core Tigrayan People Liberation Front in 2001; disputed elections in 2005 that led to violent protest and repression; a pervasive closure of political space including restrictive legislation on non-governmental organisations. But Addis Ababa also managed to retain international support for its development agenda in support of the poor; its contribution to peacekeeping in the region; and robust action in Somalia that fit with the U.S.-led global “war on terror”.

Latterly, Addis Ababa also delivered impressive economic growth. In Prime Minister Meles Zenawi, Ethiopia had an international star, who, with an experienced diplomatic cadre, made sure national interests chimed with those of the international community. The country sustained this balancing act even after his death in 2012.

In the last few years, the pendulum has swung back in Eritrea’s favour, and – against expectations – the government has used the opportunity to regain status in the Horn that it had so completely lost to Ethiopia. Proof of support to Al-Shabaab has not been forthcoming for several years. While links with other rebel groups continue, they don’t threaten international interests. Most importantly, its dire economic isolation – despite continuing sanctions – has eased.

Revenues have been helped by the large Bisha mine, which began producing gold, silver, copper and zinc in 2011. But even though many hopes for self-reliance were staked on the new business, external factors were more important. The European Union and its member states, anxious to assist the regime in stemming the flow of migrants toward the Mediterranean, have offered renewed development assistance of €200 million in late 2015.

Then the Huthi-takeover of Yemen and the Saudi-led alliance to oust them suddenly made Eritrea’s long and adjacent Red Sea coast extremely strategic. Money that the president had periodically extracted from certain Gulf states was suddenly offered in greater quantities. The United Arab Emirates (UAE) reportedly spent hundreds of millions of dollars to lease the port of Assab, mothballed since the border-conflict ended its sole function as Ethiopia’s main entrepot. The leadership will feel vindicated that their strategic patience has paid off, and President Isiais, despite reports of emergency medical interventions abroad, survives as leader.

Ethiopia’s military probably knows that delivering a decisive blow against Eritrea may fatally damage the regime and risk (another) complicated civil war on its doorstep.

Ethiopia – at least compared with when Prime Minister Meles was the regional first among equals – is struggling to maintain the unqualified support of the international community. Though it continues to play a vital role in regional mediation and security – including in South Sudan and Somalia – and its economy is still viewed with admiration, the longstanding criticism of its dirigiste approach to economic development and intolerance for political opposition is increasingly heard.

Prime Minister Haile-Mariam Desalegn, who occasionally makes reformist noises and whose background as a non-Orthodox Christian from a small “southern” ethnic group is testament to Meles’s vision of a new Ethiopia, leads more collectively but without the intellectual fizz and decision of his mentor. The ruling party is unusually open about its internal disagreements, corruption is a growing problem, and drought and famine have returned.

Ethnic Oromo protests that began last November and rumbled on for several months were clumsily contained; they were only half-heartedly blamed on Eritrea, an allegation that no one really believed. Ethiopia’s well trained and armed military probably knows that delivering a decisive blow against Eritrea may fatally damage the regime and risk (another) complicated civil war on its doorstep. A policy of robust containment has been pursued instead, but that looks increasingly difficult to sustain.

Given the reversals of fortune, and Ethiopia’s regular warnings that it would take action against Eritrea if it perceived a threat, the Tserona incident should not have come as a surprise. That it should have alarmed domestic and international observers alike is recognition that this particular fault line is not dormant and that recent seismic shifts of the plates of regional power make it particularly unstable right now.

Ethiopia, despite slightly changed circumstances, still holds most of the military, economical and political cards. It will take (uncontested) the seat reserved for African states as a non-permanent member of the United Nations security council for 2017-18, meaning sanctions on Eritrea are unlikely to ease.

However the Tserona incident could also be a wake-up call that after a decade on the sidelines, the stalemate of no peace, no war is unsustainable. The regional and international context is shifting on both sides of the equation. Ethiopia’s enduring friends and Eritrea’s renewed acquaintances should once again try to find a new diplomatic track toward resolving the border issue.