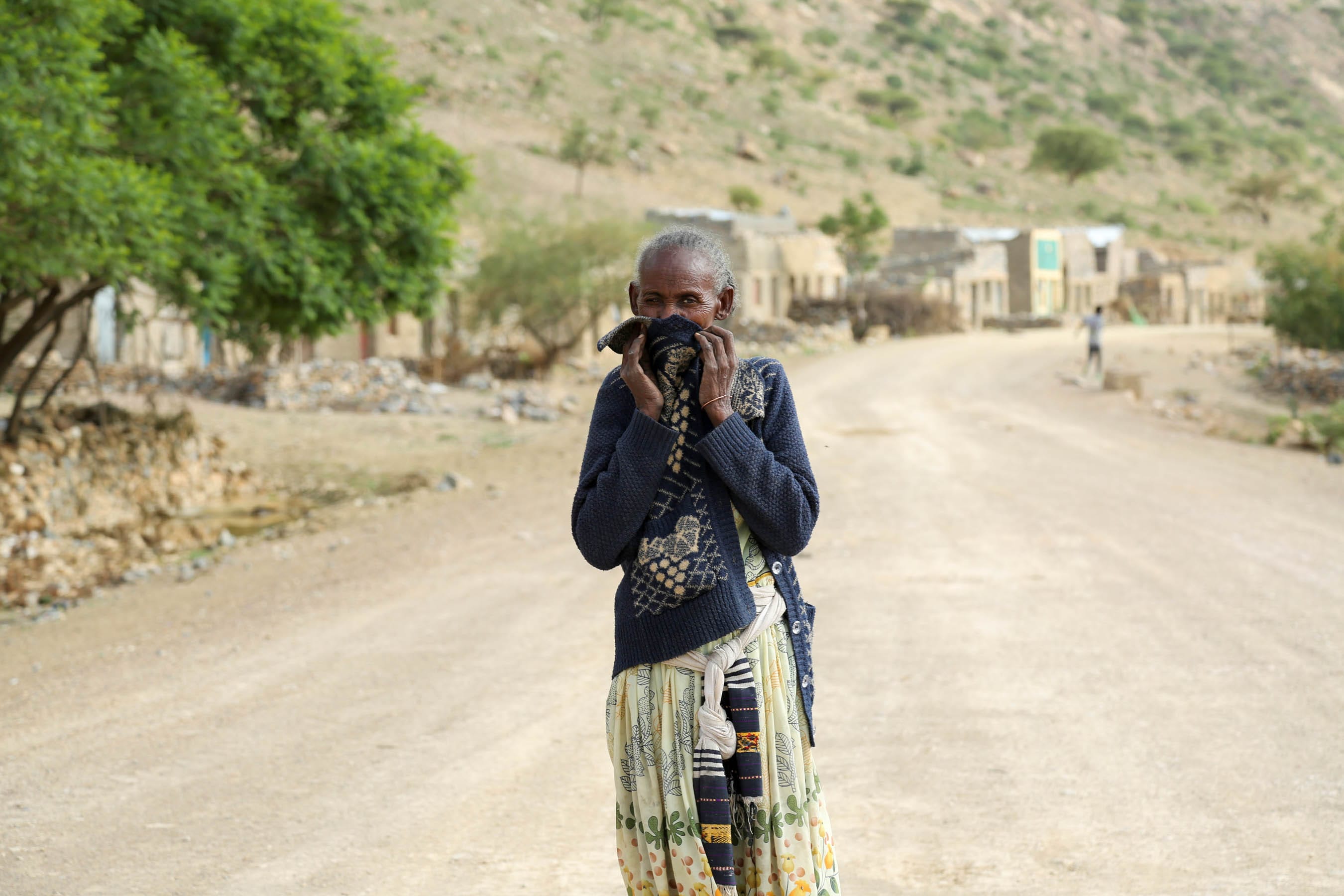 Tiebei Negash covers her mouth and nose with a shawl to ward off the smell of dead bodies in her village of Sheweate Hugum in south-central Tigray, Ethiopia, 10 July 2021. REUTERS/Giulia Paravicin
Q&A / Africa 30 July 2021

A rapidly escalating conflict has pushed Africa’s second most populous country to the edge. In this Q&A, Crisis Group expert William Davison explains why the main protagonists urgently need to strike a deal to avert a downward spiral toward state collapse.

Who is involved in the expanding fighting in Ethiopia?

Ethiopia’s grinding nine-month war has entered a dangerous new phase. In late July, the federal government and allied regional leaders intensified attempts to mobilise people from across the country to join the war against forces from the country’s northernmost region, Tigray. Those forces, having broken the back of a combined Ethiopian-Eritrean intervention in Tigray after compelling most federal troops to withdraw on 28 June, have made incursions into the neighbouring Afar and Amhara regions. In response, authorities in Addis Ababa enlisted paramilitaries from some of Ethiopia’s nine other regions to buttress the flagging federal military. They then launched a mass recruitment drive, including in the capital and in the two most populous regions, Oromia and Amhara. A war that has already exacted an awful toll now seems set to expand significantly, likely leading to thousands more deaths and far greater instability countrywide.

For their part, Tigrayan forces have moved aggressively as Addis Ababa’s recruitment campaign proceeds. Though federal authorities have, in effect, blockaded their region, Tigrayan fighters have been able to pursue federal and regional units into Afar, which lies east of Tigray, reportedly displacing tens of thousands of people who fled the violence. They may soon try to cut the key trade route from Addis Ababa through Afar to Djibouti, which functions as landlocked Ethiopia’s main port. They have also advanced south and south west, with thousands of Tigrayan fighters pushing down main roads toward Woldiya and Gondar cities in the north of Amhara, taking control of several towns along the way.

Their objective appears to be to force Ethiopian leaders into accepting their terms for a ceasefire, which now include a demand for a “transitional arrangement” – in effect, Prime Minister Abiy Ahmed’s ouster – as well as the withdrawal of Eritrean and Amhara forces from Tigray. By heading toward Gondar, these fighters may well also be preparing to try pushing the Amhara regional government out of parts of western Tigray that it occupied when the ill-fated federal intervention began in early November 2020. If they succeed, Tigrayan forces would open a supply line to neighbouring Sudan. Food and other staples from Sudan would ease the humanitarian crisis inside Tigray, but exacerbate the political one, as Addis Ababa would see Khartoum as aiding a rebellion. Sudanese-Ethiopian ties are already frayed due to clashes over the fertile al-Fashaga borderlands. 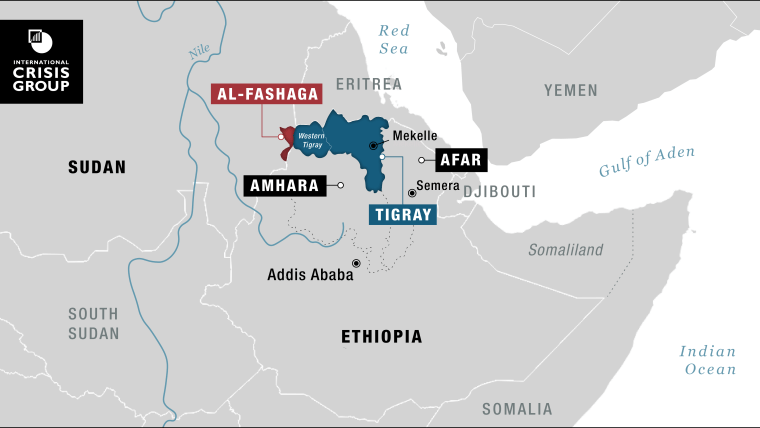 Why did Tigray’s commanders go on the offensive?

Authorities in Addis Ababa announced a “unilateral ceasefire” following the federal withdrawal from Tigray, which came after the region’s fighters had dealt the Ethiopian armed forces a series of devastating blows in June. Addis Ababa said it had taken this step to address a humanitarian crisis in which at least 400,000 Tigrayans are experiencing famine conditions. Tigray’s leaders rejected the ceasefire. Their key objection was the continued Amhara presence in western and southern Tigray and the federal blockade on the region, which Crisis Group detailed on 9 July.

This siege continues not just to keep vital aid out of Tigray but also to cut off critical services such as power and telecommunications. The head of the UN World Food Programme (WFP), David Beasley, has said its food supplies will run out in Tigray on 30 July. The agency’s vehicles have been unable to get into the region for around two weeks. WFP officials told Crisis Group that local Afar militiamen attacked an aid convoy on 18 July, forcing 170 trucks back to the regional capital, Semera, where they remain.

Tigray’s leaders ... cast their offensive as a battle for survival.

With the wind in their sails, Tigray’s leaders indicate they plan to fight on until they have re-established supply lines and the region’s pre-war administrative boundaries. They cast their offensive as a battle for survival. With famine imminent, they argue, they cannot allow Addis Ababa to asphyxiate the region, as the federal government attempted to do in the build-up to the conflict and in the war’s first two months when Tigray’s defences were overwhelmed.

Leaders in Mekelle, Tigray’s regional capital, may well be making a further political calculation. If Tigrayan forces can compel the Amhara region to relinquish the areas it took in late 2020, which many Amhara believe Tigray’s ruling party annexed in the early 1990s, that is likely to inspire considerable Amhara anger at regional and federal leaders, particularly Abiy. The ensuing heightened pressure on the premier might force him to the negotiating table on terms favourable to Tigray. Raising the stakes further, Mekelle is looking to capitalise on its gains without delay, both to alleviate the Tigrayan population’s desperate plight and to back-foot the depleted federal military before it can acquire new weapons and train and absorb the new recruits.

Where could the renewed confrontation lead?

Both sides continue to pursue a military solution, imperilling not only thousands more Ethiopian lives but also the state itself. As Crisis Group warned three days before the Tigray war broke out, the fighting could tear the country apart. Each side has demonised the other, and each has a starkly contrasting narrative of why the conflict began and what is happening now. Addis Ababa casts the Tigrayans’ current offensive as an attempt to fragment Ethiopia, using this pretext to call for more recruits. Tigrayan leaders, on the other hand, say they are battling not the Ethiopian state but what its spokesmen refer to as “Abiy’s army” or the “PP army”, in reference to the ruling Prosperity Party. For now, more bloodshed appears likely as Tigray’s commanders forge ahead and Abiy sends fresh recruits to face them.

Tigrayan forces continuing their progress would lead to increasing domestic pressure on Abiy from some quarters over the failed and costly effort to bring Tigray’s leaders to heel. As noted, an advance into Amhara-held areas would anger Amhara factions in particular. Tigrayan leaders now insist on Abiy’s departure, saying he has prosecuted a “genocidal war” upon the region alongside their archenemy, Eritrean leader Isaias Afwerki.

Tigrayan forces are likely to encounter popular resistance as they advance.

In reality, there are still few obvious alternatives to Abiy as national leader. His Prosperity Party just won a landslide in an election (though some major opposition parties boycotted) and he still commands considerable popular support. Moreover, a Tigrayan advance would also galvanise some Ethiopians to double down on their support for him. Tigrayan leaders, whom many Ethiopians blame for decades of authoritarian rule after 1991, when they wielded a disproportionate share of federal power, are widely reviled in the rest of Ethiopia. Tigrayan forces are likely to encounter popular resistance as they advance. The country could descend into even greater chaos, replete with mob attacks on Tigrayan residents and intensified official persecution of Tigrayans. Similar turmoil could develop if Tigrayan forces are able to choke Addis Ababa, blocking imports such as fuel, food and medicine that are vital to the frail economy.

What steps need to be taken to pull Ethiopia back from the brink?

Key international actors such as the U.S. and European Union share a similar level of alarm about the situation. They urgently need to work in concert to prevent a further unravelling. International actors with direct access to Abiy – such as UN Secretary-General António Guterres, WFP director Beasley and United Arab Emirates ruler Mohamed Bin Zayed – should implore him not to throw more raw recruits at Tigrayan forces that have shown considerable military acumen thus far and are gaining strength as they capture hardware.

Abiy should seek some form of deal with Tigrayan leaders to avoid the country’s further disintegration.

Instead, Abiy should seek some form of deal with Tigrayan leaders to avoid the country’s further disintegration. Such an understanding would likely involve an Amhara withdrawal from western Tigray, perhaps in exchange for a Tigrayan pledge to have the territorial dispute addressed politically in the future, as Crisis Group recommended in June 2020, months before the war.

Tigrayan leaders, for their part, should stop their advances and soften the transitional government demand. Instead, they should give Abiy and Amhara leaders some time to withdraw forces from western Tigray. Alongside these measures, the federal government would restore basic services such as telecommunications, electricity and banking while granting humanitarian access to Tigray. For now, the parties need to shelve thorny disputes over power arrangements in Addis Ababa and Tigray’s future within the federation. The priority instead must be to prevent mass starvation and check the very real risk that the Horn of Africa’s pivotal state falls apart.

As Ethiopian Troops Exit Tigray, Time to Focus on Relief

Behind the Front Lines in Ethiopia’s Tigray