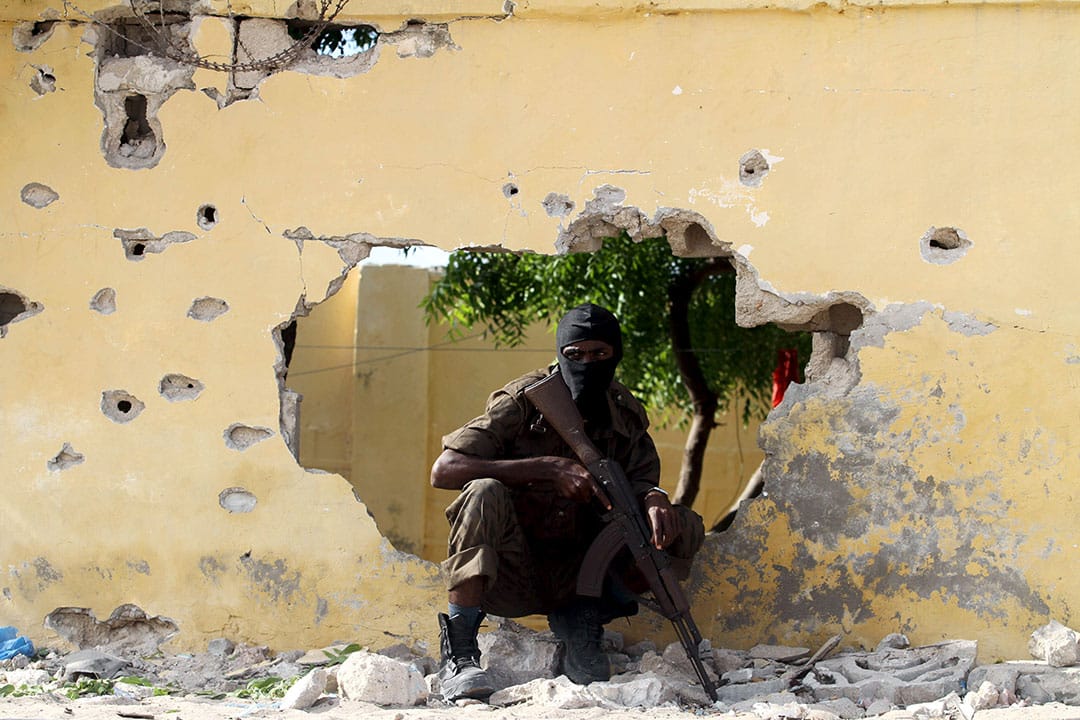 A Somali soldier takes position at the scene of a suicide attack by al Shabaab militants in capital Mogadishu on 21 June 2015. REUTERS/Feisal Omar
Commentary / Africa 27 June 2016

Somalia’s Al-Shabaab Down but Far from Out

Somalia’s militant group, Al-Shabaab, has often defied its adversaries’ claims that it is in decline. In recent months, however, the movement has suffered setbacks, including territorial losses, high-ranking commanders killed and defections. The Somali Federal Government (SFG) and its internal, regional and international allies need to be clear-sighted about the reasons for these, and what they can do to stop another Al-Shabaab recovery.

Al-Shabaab’s set-backs – and fewer attacks by the movement during the Ramadan holy Muslim month of fasting than in previous years – are the result of three distinct and unrelated factors. First, an enhanced and largely externally directed and funded campaign including drone strikes has eliminated high-profile leaders and diminished its military capacity. Second, some of Somalia’s new federal units are demonstrating greater military effectiveness, even if they and the government still rely primarily on clan-based militias. Third, the Islamic State (IS) has challenged Al-Shabaab’s greatest internal vulnerability – its ideological cohesion.

Whether the Somali government and its allies can advance their cause will largely depend on greater agreement on priorities and coordination of action – no easy task, given the wide and diverse range of external and internal actors.

The Impact of U.S. Strikes

The U.S. has already stepped up its longstanding campaign against individual Al-Shabaab commanders and attacking the group’s military capacity. Drone strikes and ground operations have killed at least five Al-Shabaab leaders: Abdirahman Sandhere “Ukash”, from the combat operations wing (jabha), in December 2015; Hassan Ali Dhore, from the security and intelligence wing (amniyat) in March 2016; Daud Ma’alim (also known as Yusuf Haji), also from the amniyat, in May 2016; and Ma’alim Aden Hassan, a military instructor, in June 2016.

The U.S. army also claims that a drone strike in March this year killed 150 militants in a training camp in the Hiiraan region. Other successful assaults were launched by the U.S. contractor-trained Somali “Thunder” (Danab) Brigade – an elite, 570-strong commando force – from its Baladogle military air base in the Lower Shabelle region. Most recently the brigade killed Mohammed Mahmoud Ali “Dulyadeen” or “Kuno”, a leading commander reportedly responsible for the attack on Kenya’s Garissa university college that killed 147 students. 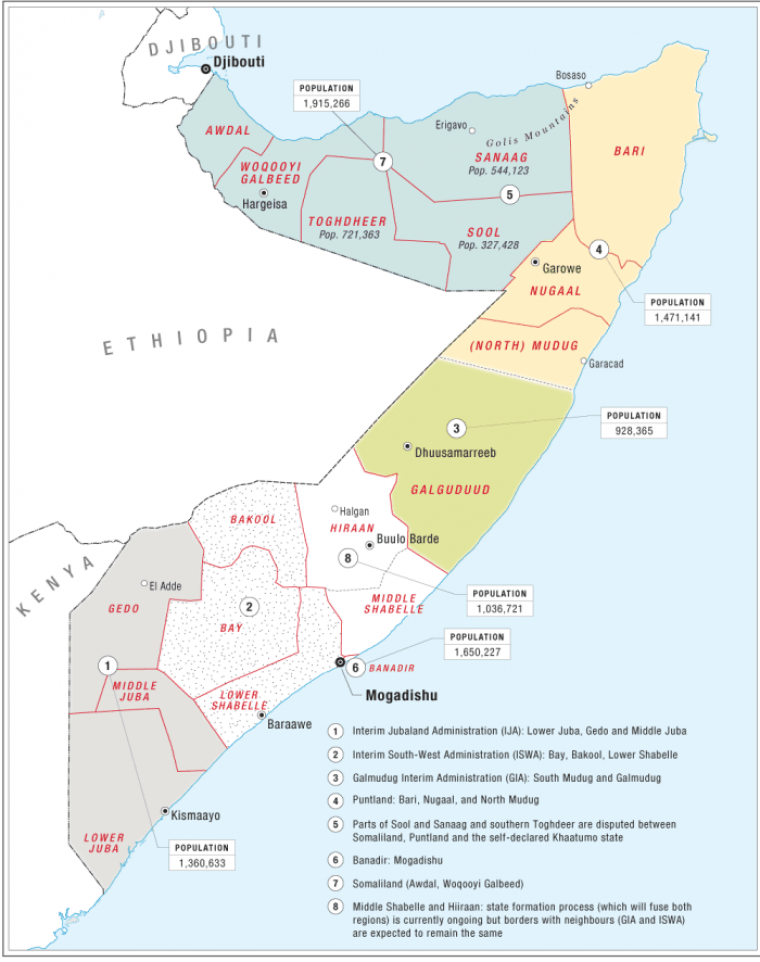 Another important strike against Al-Shabaab came from some Somali clans, a reversal of Al-Shabaab’s usually deft management of clan relations. In February 2016, Abgal clan militias forced the group out of several locations in the Middle Shabelle region following resistance against alms (zakat) demands; Gugundhabe “Ma’awis Lei” clan militias did the same in Hiiraan, as did the original clan-based Sufi-inspired anti-Al-Shabaab militia Ahlu Sunna Wal Jama’a in Gedo (with the help of Ethiopian forces). The now more substantive federal states and interim administrations have also used their clan-based militias. In March 2016, for example, Al-Shabaab units were caught between the Somali National Army, Puntland’s “Darwiish” forces and Galmudug Interim Administration militias as they attempted to enter the Mudug region and its port town of Gara’ad.

The IS factor is the latest playing into a number of internal divisions that are arguably more deadly to Al-Shabaab than the military forces pitted against it.

The March 2016 losses in Mudug were the result of Al-Shabaab’s botched attempts to move fighters toward their Golis mountain stronghold between Puntland and Somaliland as the group tried to eliminate a dissident faction that had declared allegiance to the so-called IS. The IS factor is the latest playing into a number of longstanding internal divisions – including reports of internal criticism of the current Emir Ahmed Diriye “Abu Ubaidah” – that are arguably more deadly to Al-Shabaab than the military forces pitted against it. The prominent Sheikh Abdulqadir Mumim’s October 2015 pledge of loyalty (ba’ya) to IS was the most high-profile of at least four different pro-IS dissident factions across Somalia, which Al-Shabaab’s amniyat security wing ruthlessly began to exterminate in November 2015.

The internal purge against suspected IS sympathisers may explain a wave of Al-Shabaab defections to Somali government forces. These include the April defections of Ahmed Mohamud Afrah, a senior commander responsible for collecting tax (zakawat) contributions and Mohamed Hooley, a district commander in Galgadud region, as well as the defection of amniyat security officer Hassan Isaq Nuur in May. It may also explain a reshuffle of Shabaab’s governors (walis) in Lower Shabelle, Hiiraan and Mudug.

Despite these setbacks, the group can still hit hard against the Somali Federal Government and its allies, including the African Union Mission in Somalia (AMISOM). Soft targets like government offices and hotels in Mogadishu are regularly subject to Al-Shabaab “complex attacks”, the latest against the Naasa Hablood Hotel on 25 June and the Ambassador Hotel on 1 June, killing civilians and a number of SFG officials, ministers and members of parliament with whom both venues were popular. An AMISOM base manned by an Ethiopian National Defence Forces contingent near the town of Halgaan, in Hiiraan region, was overrun on 9 June with significant casualties. Unlike the devastating attack on the Kenya Defence Force contingent in AMISOM’s base in El-Adde in January 2016, (Ethiopian) air power and reinforcements came quickly to Halgaan and inflicted heavy casualties on Al-Shabaab.

Reduced European Union funding and domestic issues are making some troop contributing countries threaten a draw down, with Uganda announcing its planned exit in late 2017.

Worryingly, however, AMISOM has appeared to have disengaged somewhat on the ground. Despite its critical role and sacrifice in removing Al-Shabaab from strategic locations and opening the space for political progress, it has taken both a physical and political beating over the last eighteen months. Reduced European Union funding and domestic issues are making some troop contributing countries threaten a draw down, with Uganda announcing its planned exit in late 2017.

The Double-edged Sword of Regional Peace-support

AMISOM’s role as both an operation against Al-Shabaab and as a peace-support force increasingly suffers from being dominated by nearby powers. It could almost be called “IGADSOM”: Burundi aside, all troop contributing countries are members of East Africa’s regional peace and security organisation, the Inter-Governmental Authority on Development (IGAD). Kenya and Ethiopia are Somalia’s direct neighbours; part of a wider trend on the continent of neighbours participating in stabilisation or peace operations. A troop contributor that is a neighbour can more directly support the new federal entities with whom it shares borders and knows intimately. But this also risks sidelining the development of the still weak Somalia National Army, and may indirectly risk friction between the Somali Federal Government and federal entities, as well as between the entities themselves.

The heavy presence of neighbouring states in the newer federal entities of Jubaland, South West State and Galmudug can look like a partisan foreign occupation, especially where they are still internally disputed. Al-Shabaab can easily appeal to disgruntled Somali clans by charging that foreigners are manipulating internal affairs, then portray its role as Muslim resistance to non-Muslim powers, and implicitly, the defender of Somalia’s sovereignty.

Al-Shabaab has been a tough survivor and one of its easiest wins is that it has been able to split the internal and external threats it faces.

Ethiopia’s deployment to Somalia of the auxiliary (Ogaden) clan militias – from its own federal Somali National Regional State – has also led to clashes with non-Ogadeni Somali clans in the shared border regions. In the medium term, with better-armed federal entities and clans taking the fight to Al-Shabaab, AMISOM may be faced with more conventional tasks of inter-communal peacekeeping, tasks for which governments and electorates in the troop contributing countries may have little appetite.

Any strengthening of Somalia’s federal states represents a threat to Al-Shabaab. This includes the coming elections, where local clan-based electoral colleges in each of the federal states will directly select MPs. This should garner greater local buy-in for the federal government model, if not for centrally directed government. Greater stabilisation support to the more substantive federal entities will also help. But to win back the political space and undermine Al-Shabaab’s ideology, Somali actors must create and act on a coherent narrative.

Al-Shabaab has been a tough survivor and one of its easiest wins is that it has been able to split the internal and external threats it faces. The divisions that IS prompts within Al-Shabaab are worth nothing if the Somali Federal Government does not offer a third way for political dialogue and accommodation, enhancing the current policy of individual amnesty.

Despite effective U.S. training for specialised commando units, overall attempts to rebuild the Somali National Army could be strengthened by better coordination among the large number of other states – at least eleven others – involved in their training. The reality of stronger federal entities and clan-based militias also demands a rethink of how Somalia’s security forces are to be rebuilt from a less centralised starting point. Above all, there is an urgent need for a concerted program of reconciliation at all levels, without which federal states and their clan militias are still as likely to fight one another (and the Somali National Army) as they are to take on Al-Shabaab itself.

Somalia has been fighting the Al-Shabaab jihadist insurgency for well over a decade. After reclaiming control of Mogadishu and other cities in the early 2010s, government forces – with the support of African Union troops – have made limited progress since. Instead, Al-Shabaab has adopted guerilla tactics and managed to consolidate control of rural areas, while regularly conducting deadly attacks on Somali cities. A recent Crisis Group report recommended that stakeholders should at least begin to explore the feasibility of eventual political talks with Al-Shabaab, alongside pursuing existing military operations, to add another tool in the struggle to bring the longstanding conflict to an end.

This week on The Horn, Alan talks to Omar Mahmood, Crisis Group’s Senior Analyst for East Africa, to discuss the risks and opportunities that this approach might incur. They assess the strengths and limitations of the military campaign against Al-Shabaab and its prospects for success, as African Union forces inch closer to the end of their mandate in the country. They discuss previous attempts to engage Al-Shabaab and the group’s willingness for dialogue. They talk about the impact of multiple failed rainy seasons in Somalia and the need for humanitarian assistance that reaches populations in both government and insurgent-controlled areas. They also discuss the wider implications of Somalia’s Al-Shabaab outlook in the region, including how the country’s neighbours and international partners might respond to the prospect of engagement with a self-professed al-Qaeda affiliate.

Check out Crisis Group’s report, “Considering Political Engagement with Al-Shabaab in Somalia”, in full to learn more about the situation in Somalia and efforts to bring the conflict to an end.