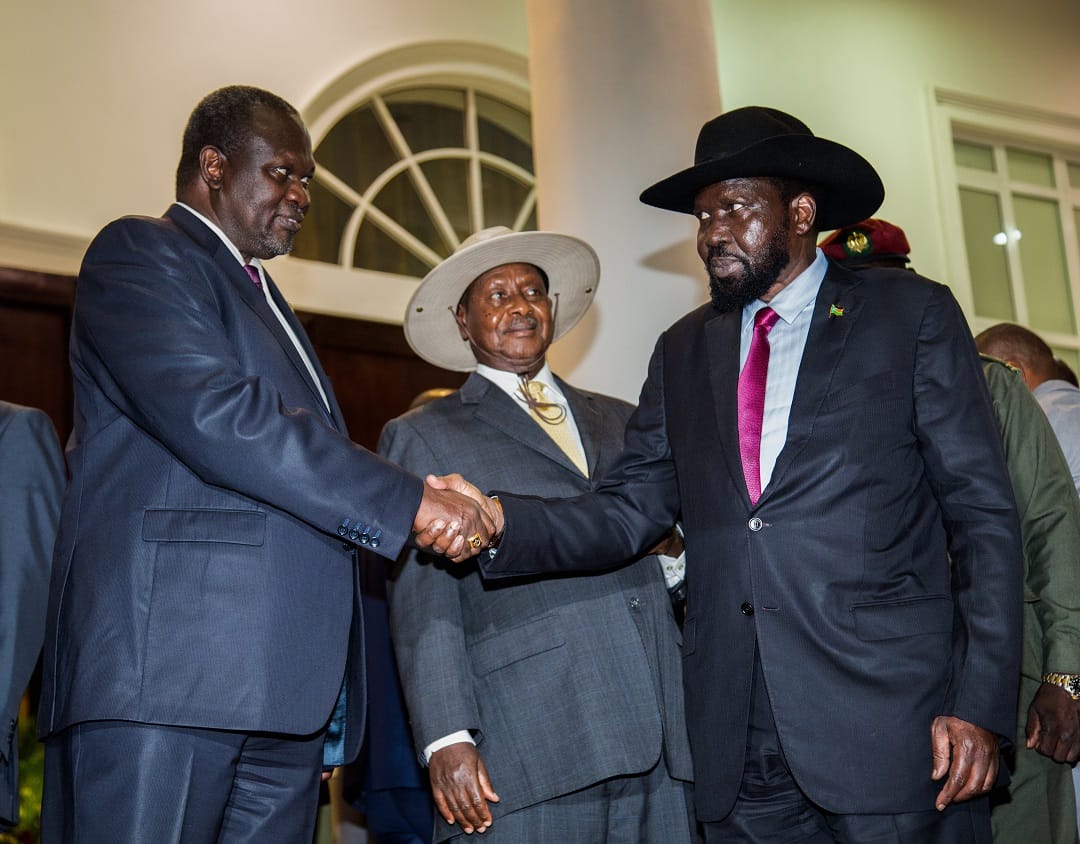 15 December 2018 marks the fifth anniversary of South Sudan's civil war. To ensure that September’s peace agreement does not meet the fate of previous failed attempts at peace, a broader political settlement that shares power across the country’s groups and regions is needed.

On the night of 15 December 2013, shots rang out on the edge of South Sudan’s capital where the elite presidential guard slept. Juba was already a tinderbox. This was the spark.

South Sudan’s army disintegrated. The next morning, bands of soldiers loyal to President Salva Kiir combed the streets, hunting for ethnic Nuer deemed loyal to the recently sacked vice president, Riek Machar, who was challenging Kiir for leadership. Word of the massacre spread. So too did the revolts.

South Sudan’s war has raged ever since, expanding into different corners of the country, as more groups succumbed to the desperate power struggle. A recent study estimates the death toll to be as high as 400,000.

This Christmas will be more hopeful than the last, however. In September, the warring parties agreed to a new peace deal expected to see rebel leader Machar return to Juba as one of five vice presidents ahead of general elections scheduled for 2022.

But after other similar attempts to secure peace or ensure a ceasefire collapsed over the past five years, questions remain as to whether this agreement is any different and if it will succeed.

Al-Bashir had more leverage over both sides and was eager to boost South Sudan’s oil production, which his country exports in its pipelines for a substantial fee – doing so required some degree of stability, particularly in oil-producing areas in Machar’s home state of Unity.

Kiir has put up less resistance to the peace deal this time mostly because he is in a position of strength.

The Sudanese leader asked Ugandan President Yoweri Museveni, Juba’s ally, to convince Kiir to accept Machar's return as vice president; Kiir relented. Machar, meanwhile, weakened and desperate to end his exile, was especially hesitant to say no to Bashir, who, he privately admits to fellow opposition leaders, is his last friend left in the region.

For his part, Kiir has put up less resistance to the peace deal this time mostly because he is in a position of strength. But that also means he can resist its implementation. Last month, he sent his senior security strongman, Akol Koor, to meet with Machar in Khartoum to tell him the opposition would need to integrate into the existing army. Machar complained that the peace deal called for training a new army. The two sides still disagree.

This was designed to make the 2018 deal more inclusive than a similar agreement signed in 2015, which did not include other opposition groups. However, if anything, the extra seats have only further fragmented the opposition, which is weak with infighting and factiousness. None of the other opposition groups that signed the accord are relevant militarily.

While the accord adds some new elements – it speeds up timelines for forming a unified army and includes provisions to determine South Sudan’s internal borders (heavily gerrymandered during the war) – the basic 2015 model remains the same: an end to fighting followed by a power-sharing government, then elections.

Much of the new agreement is copy and pasted from the last.

In February 2016, soon after the 2015 peace deal was signed following two years of war, I met rebel officials who arrived in Juba to prepare for their leader Machar’s return. Distrust was high.

Sitting in a sandy courtyard, a skittish rebel governor flicked a stick through the middle of a crudely drawn map of South Sudan, scratched into the sand. “This will need to be a new country”, he proclaimed, pointing to the southern half where his forces continued mobilising.

Machar returned to Juba two months later, in April 2016. Just weeks after that, in July, fighting broke out between the two armies and the deal collapsed.

“You think we’ve forgotten 2016?” asked a rebel official, who is once again in Juba. During the bloodletting after the collapse of the last deal, the official hid in a UN-protected civilian camp before sneaking back into rebel territory.

It is already clear the new peace deal will not be implemented fully or on time.

Others fled on foot with Machar, pursued for weeks by elite government soldiers through thick forests until, following poachers’ trails, they crossed into the Democratic Republic of Congo’s Garamba National Park. Dozens of Machar’s bodyguards died along the way. Some starved to death; others poisoned themselves eating wild roots in a strange jungle far from home.

As always, civilians suffered most. After July 2016, violence forced up to a million more people from their homes. Untold numbers perished. Villages burned. Women and girls suffered rape from all sides. In Juba, diplomats and aid workers hunkered down, unable to access the airport for evacuations. Government soldiers raided one compound housing aid workers and gang-raped them.

It is already clear the new peace deal will not be implemented fully or on time. Events will likely head in one of two directions.

The first scenario would see the formation of the unity government postponed because the deal’s other components are delayed or stalled. In principle, these components – including temporary security arrangements, unifying the army, local power sharing, and setting South Sudan’s internal borders – should be resolved before the new government forms, but they are particularly contentious and far behind schedule. If the unity government is pushed back, the agreement risks losing steam. This will sap confidence in the process – both from the parties to the deal as well as the donors asked to fund it.

There will be heavy pressure, therefore, from within South Sudan and the region, for the second scenario to play out: the formation of the unity government despite outstanding disagreements on other elements of the accord. Machar himself may opt to make the best of the situation, return as Kiir’s deputy, and begin mobilising for presidential elections in 2022.

These are familiar – and treacherous – waters. In 2016, under pressure as peace implementation flagged, he told his caucus he would return to Juba to push the peace deal forward from the inside. When he did so, the government deadlocked, then imploded.

Both scenarios are thus mined with pitfalls. Navigating either will require pressuring the parties enough to keep forward momentum without toppling the wobbly truce. This is a particular challenge for Western diplomats, fatigued by the crisis and cut out of the Khartoum deal-making even as their countries pay to fly in the food keeping South Sudanese alive.

Old Risks to a New Deal

People in the country are desperate for the war to end. But while the peace deal exists on paper, a final political settlement is still a long way off.

For outside actors involved in the process, the immediate concern is preventing an implosion of violence if the accord collapses. A second is to overcome the unresolved power struggle and deep animosity between Kiir and Machar.

For now, what is urgently required is sustained third-party shuttle diplomacy among the regional heads of state who enjoy leverage over South Sudanese politicians.

Kiir hopes to sideline his rival, even if Machar returns to Juba. Machar’s longer-term plan is to defeat Kiir in elections. The same dynamic created the 2013 political crisis, which escalated into civil war, and also undermined the 2015 deal.

The cycle will not end without, at a minimum, finding some resolution to the political gridlock created by the Kiir-Machar rivalry. But over time, a political settlement is needed that shares power more broadly across South Sudan’s groups and regions.

For now, what is urgently required is sustained third-party shuttle diplomacy among the regional heads of state who enjoy leverage over South Sudanese politicians, but back different sides and pursue their own short-term interests as much as a peaceful settlement.

Regional officials privately admit that they struggle to reach consensus or change course where necessary, particularly since policy is negotiated only at the highest levels, and meetings between heads of state are infrequent. Key decisions linger until crises hit. An empowered external actor should shuttle between Khartoum, Kampala, Addis Ababa, and Nairobi, helping to forge a coherent regional approach and pressing for sustained action.

International engagement along those lines has disappeared. The United States has had no senior envoy devoted to South Sudan since 2016 and no other government or body has stepped up to assume Washington’s lead role. This abdication is baffling; diplomacy is much cheaper than footing the billion-dollar annual bill for an endless humanitarian crisis.

Diplomats are quick to proclaim that South Sudan’s leaders “lack the political will” to end the war. The affliction appears contagious. Five years into South Sudan’s war, the world too appears to have lost the will to help draw the country’s nightmare to a close.

This article was originally published by IRIN News, a news agency specialising in reporting on humanitarian crises and emergencies. Read the article here.