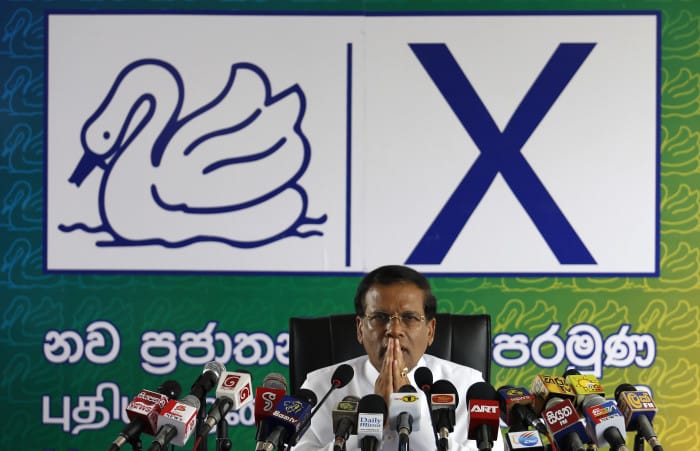 As the clock ticks down to Sri Lanka’s 8 January presidential election, voters appear to face a clear choice between an incumbent committed to increasingly centralised presidential authority and an opposition pledging to reverse that trend and restore power to the legislature. Following a month of often bitter campaigning, fears are growing the vote could be marred by polling-day abuses and possible post-election violence and fraud. The campaign has already seen frequent attacks on opposition rallies and supporters and what appears to have been a significant level of misuse of state resources by the incumbent, President Mahinda Rajapaksa. The growing possibility of an opposition victory looks set to heighten risks over both the integrity of the vote and post-election stability.

Just months ago, the polls seemed pre-destined to result in a clear Rajapaksa victory; indeed, so confident was Rajapaksa that he called the election two years early. But in a surprise move in late November, the opposition announced a consensus candidate to take on the governing coalition: Maithripala Sirisena, himself a former minister in Rajapaksa’s government.  Since then, two dozen other parliamentarians have left the ruling United People’s Freedom Alliance (UPFA) and endorsed Sirisena, including all members of the Sri Lanka Muslim Congress (SLMC). They were later joined by Sri Lanka’s main ethnic Tamil party, the Tamil National Alliance (TNA). With Sirisena drawing large crowds, his anti-corruption message appearing to resonate widely and some polls indicating he’s in the lead, a majority vote for the opposition is possible, according to some even probable.

With the TNA and SLMC endorsements, the joint opposition now spans virtually the entire political spectrum and represents all Sri Lanka’s ethnic communities. TNA leaders reportedly delayed their formal endorsement – announced on 30 December – in order to give Sirisena’s campaign time to establish itself free of the expected Sinhala nationalist attacks from Rajapaksa. At the same time, with Sirisena and the joint opposition careful not to offer support for any long-standing Tamil demands – including on devolution of power and accountability for wartime atrocities – the TNA was under pressure from some Tamil constituencies to remain neutral or even call for a boycott. When TNA leaders did announce their decision to back Sirisena, they explained it was “essential for the health of Sri Lanka’s democracy that the authoritarian and dictatorial trajectory on which the Rajapaksa regime has set the country be reversed urgently.”

Despite this caution from both the TNA and Sirisena, the government quickly accused the two of making a secret agreement to support Tamil separatism. With Rajapaksa’s campaign making the most of its control over state media, its nationalist allegations could still resonate with many Sinhala voters. Government media and Rajapaksa officials made a similar claim against the SLMC – accusing it of joining the TNA and Sirisena in an international conspiracy to divide the country on ethnic lines – in response to their widely anticipated decision to leave the government.

The 28 December decision of the SLMC, together with nearly all other Muslim members of government, to switch sides and endorse Sirisena, was a particular blow to Rajapaksa’s chances. SLMC leaders, especially then justice minister Rauff Hakeem, had been under growing pressure from their members and many of their voters to leave government in protest at the government’s failure to protect Muslims from three years of violence and hate speech at the hands of militant Buddhists.

Continuing in government became politically impossible for the SLMC following the 22 December departure of its main rival, the All Ceylon Muslim Congress (ACMC), whose leader, Rishad Bathiudeen, had been close to the president’s brother, economic development minister Basil Rajapaksa. The departure of deputy minister Faizer Mustapha, who had maintained close ties to the president’s other, more powerful brother, defence secretary Gotabaya Rajapaksa, was further evidence of the deep alienation felt by Muslims – and resultant political damage to the Rajapaksas’ own interests – caused by the government’s tacit support to anti-Muslim campaigning.

Sri Lanka’s main Buddhist militant group, Bodu Bala Sena (Buddhist Power Force, or BBS), which has endorsed Rajapaksa’s re-election, was quick to attack the SLMC, accusing its leader of being a “political prostitute” bent on dividing the country. While the government appears to be holding BBS in check during the campaign, possibly for fear of losing what remaining Muslim votes Rajapaksa may get, many Muslims are worried their community may be targeted for retribution should Rajapaksa return to power. Indeed, concerns over being targeted as traitorous extremists by the state contributed to the SLMC’s initial reluctance to withdraw from the coalition government. (A forthcoming Crisis Group report will examine the militant Buddhist campaign against Sri Lanka’s Muslims and responses from the government and the Muslim community).

Already, the campaign has been one of the most violent in Sri Lanka’s history, with one domestic election monitor reporting more than 100 election-related attacks, virtually all against opposition supporters. Among the more notable incidents are:

With impunity deeply entrenched and no independent institutions capable of checking state abuse – as evidenced by last year’s provincial elections in the Tamil majority north – it remains to be seen how effective the efforts of election monitors can be. Domestic monitoring groups have already done important and risky work detailing violence and alleged abuse of state resources. They have now been joined by observation missions from the Commonwealth and the Asian Network for Free Elections (ANFREL), as well as international teams invited by local groups. An initial invitation from the elections commissioner to the European Union (EU) to send monitors was later rescinded, reportedly due to pressure from the government. A 2 January EU statement calling for a “peaceful, credible and transparent” election earned a sharp rebuke from the Sri Lankan foreign ministry, angry at its interference in a “strictly domestic” issue.

On 1 January, opposition leaders made public what they claimed were detailed plans to deploy military units and retired army officers to key electorates in a bid to suppress opposition voters. Defence officials deny the allegations, but the military appear already to have been involved in various ways in support of Rajapaksa’s re-election – from building stages for his rallies to allegedly mailing pro-Rajapaksa propaganda to thousands of soldiers – and Commonwealth observers have agreed to look into concerns about the military’s role. Many worry troops could be deployed to intimidate Tamil and Muslim voters in the already heavily militarised north and east of the island. Recent heavy flooding in large parts of the north, east and central hills already threatens to reduce turnout considerably. The military’s central role in delivering relief to the affected communities has heightened these worries.

Perhaps the key challenge for monitors will be to document evidence of – if their presence cannot serve to ward off – any manipulation of the results. With the elections commissioner allowing domestic monitors access to less than a third of the more than 1000 counting centres, scepticism is high about the reliability of the final count; in the words of one senior diplomat in Colombo, “the election will be stolen in the counting centres”.

The threat of violence will remain high in the immediate aftermath of the election.

The threat of violence will remain high in the immediate aftermath of the election. Should Rajapaksa emerge victorious, many of his opponents could be at risk. The past month of campaigning has seen a sharp increase in public criticism of the ruling family and regime from many intellectuals, artists and professionals previously too fearful to express their criticisms. While the increased space for public debate is welcome, it leaves many people vulnerable to retribution should Rajapaksa return to power. Memories of the arrest and prosecution of former army commander Sarath Fonseka following his defeat in the 2010 presidential election are fresh in many minds. Should Rajapaksa be defeated, his supporters could also be at risk, as post-election attacks on supporters of the losing side have been an unfortunate feature of most Sri Lankan elections. The visit of Pope Francis to Sri Lanka, scheduled for 13-15 January, could help limit potential post-election violence, as the winner will not want to be blamed for tarnishing a rare papal visit.

If the vote count goes against Rajapaksa, many worry he and his powerful family may not go quietly. While an outright military coup appears unlikely, some fear Rajapaksa may claim a right to serve out the remaining two years of his term and refuse to leave office, sparking a constitutional crisis with all its attendant uncertainty. The body charged with resolving such a dispute – the Supreme Court, widely viewed as loyal to the president – is unlikely to provide a determination that would be universally respected.  A Sirisena victory would also likely be disputed, whether through the courts or the street, where the BBS and other nationalist allies might seek to destabilise the new government.

Whoever loses, however, will be presented with an opportunity to regroup in the parliamentary elections that could come within a few months of the presidential polls. And whoever wins will face the challenge of mending a polity in urgent need of being brought together.  This is true not just of Colombo’s politics but also with respect to the many legitimate demands of Sri Lanka’s beleaguered Tamil community that remain to be addressed.  Understandably, if not admirably, Sirisena has promised to continue the current government’s policy of rejecting efforts by the international community to ensure accountability for the thousands of civilian deaths incurred at government hands at the end of the civil conflict in 2009. These efforts have not gone away, even five years after that bloody denouement, but rather have intensified. Thus whether Rajapaksa or Sirisena, whoever wins will need adequately to address the many credible allegations over the army’s conduct at the end of the war if they are effectively to reduce international pressure.

In short, Sri Lankan politics are almost certain to remain volatile in the months ahead. Continued vigilance and engagement from Sri Lanka’s international partners – to encourage a peaceful electoral process, tempered rhetoric, adequate observation of counting centres, and respect for the results duly observed – will remain essential if Sri Lanka is eventually to emerge with greater stability and better chances for lasting reconciliation.

For Lanka, A Long Road to Democratic Reform Awaits