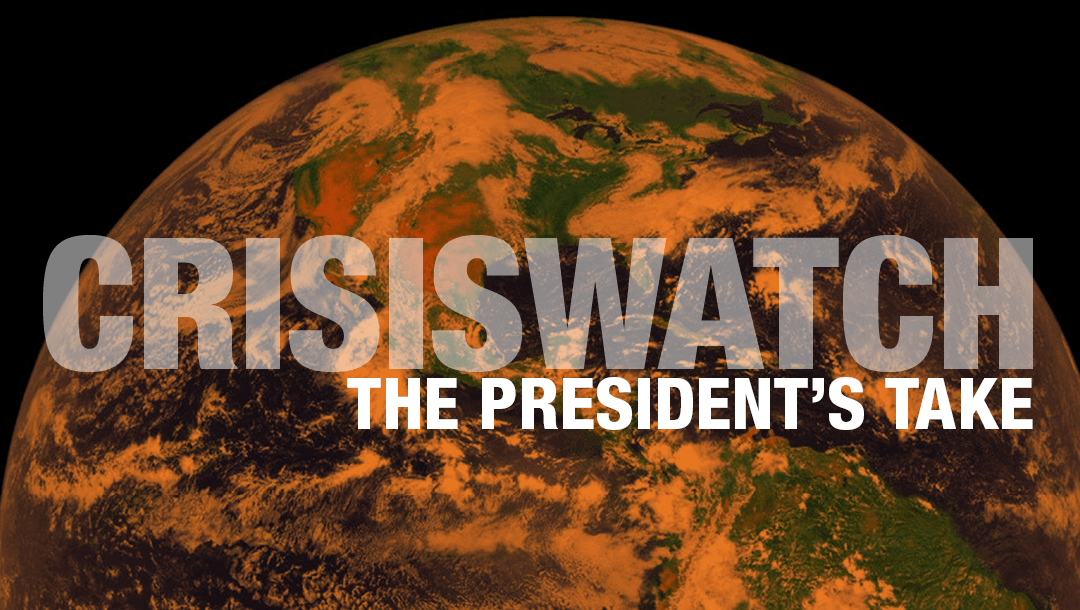 U.S. and Iran Cannot Both Be Right, and Both Risk Being Wrong

In his introduction to this month's edition of CrisisWatch, Crisis Group's conflict tracker, our President Robert Malley reflects on how, in the absence of talks, the U.S.-Iran standoff and the Afghanistan war risk going from bad to worse. In Sudan, however, he sees hope for a new era.

September is the month when all eyes – at least those not focused this year on developments at once riveting and dismaying in Washington and London – are upon the UN General Assembly. With growing great power competition, shrinking space for multilateralism and dwindling attention to conflict resolution, a complaint I heard from more than one diplomat was that the General Assembly’s annual high-level session was increasingly turning from a unique annual opportunity for diplomacy into a talk-fest – the UN’s Davos, in the words of one, which he did not mean as a compliment.

One of the few substantive efforts that took place had to do with U.S.-Iran relations. French President Emmanuel Macron attempted to make use of the gathering to broker a meeting between the two countries’ heads of state and de-escalate regional tensions that rose dramatically after the 14 September attack on Saudi oil fields. As Macron found out, it’s an almost impossible circle to square. The U.S. is persuaded that by tightening pressure on Iran through punishing economic sanctions, it will force it to the table in a weaker position. Iran is convinced that by fuelling regional tensions and expanding its nuclear program, it will force the U.S. and its allies to understand they too will pay a price for their economic warfare and get them to reassess their stance. Both cannot be right, both could be wrong, and the result might be a confrontation to which neither aspires. As the U.S.’s 2020 presidential elections draw nearer, President Trump almost certainly does not want a military conflict, but at some point Iran’s actions could present him with a dilemma: are his re-election chances hurt more by starting a new war or by appearing weak?

Macron’s gambit was straightforward: get the U.S. to offer some sanctions relief and Iran to resume compliance with the nuclear deal, arrange an unprecedented meeting between the U.S. and Iranian presidents in New York, and begin negotiations over a new, more comprehensive deal. But here too, he bumped up against the two sides’ irreconcilable stances. Iran wanted guarantees of sanctions relief prior to any meeting. Trump insisted on first holding the meeting, which, he predicted, would go well and lead to a lifting of sanctions. A way out does not seem beyond reach, but more work will be needed to get the choreography, sequencing and substance right – and prevent things from going terribly wrong. Crisis Group will continue to offer suggestions in this regard.

The best of a range of less-than-ideal outcomes would be to conclude the U.S.-Taliban agreement and then use the pace and conditions for a U.S. military withdrawal.

There was also much talk, if not concrete action, on several other conflict-related issues, including Afghanistan. Many diplomats gathered in New York expressed puzzlement at President Trump’s last-minute decision to cancel talks with the Taliban. There are, of course, risks related to sequence of negotiations – first between the U.S. and the Taliban, and then among Afghans – and in particular questions about whether, having secured an American commitment to withdraw, the Taliban would have genuine incentive to compromise on the domestic front. But the war has been going on for too long, casualties are mounting, and the talks led by U.S. Special Envoy Zalmay Khalilzad presented the most serious opportunity to date to advance toward a peaceful resolution. As Crisis Group has argued, the best of a range of less-than-ideal outcomes would be to conclude the U.S.-Taliban agreement and then use the pace and conditions for a U.S. military withdrawal, prospect of continued financial assistance, and potential for normalisation of relations with a future government that includes the Taliban as incentives for the parties to reach agreement in the intra-Afghan talks.

There was measured optimism on Sudan, with hope expressed by many that this summer’s agreement between the military and protesters coupled with this month’s signing of a roadmap for peace between the government and armed rebel groups could usher in a new era. Now the challenge will be to find ways to empower Prime Minister Abdalla Hamdok while gradually loosening the military’s control over the economy. Expect a Crisis Group report with practical suggestions soon.

By the time you will read this, our colleague Michael Kovrig will have been detained in China for almost 300 days. On each of those days, we have missed his presence and sharp intellect. His resilience and courage in the face of injustice have not flagged, and nor has our determination to get him out as quickly as possible.