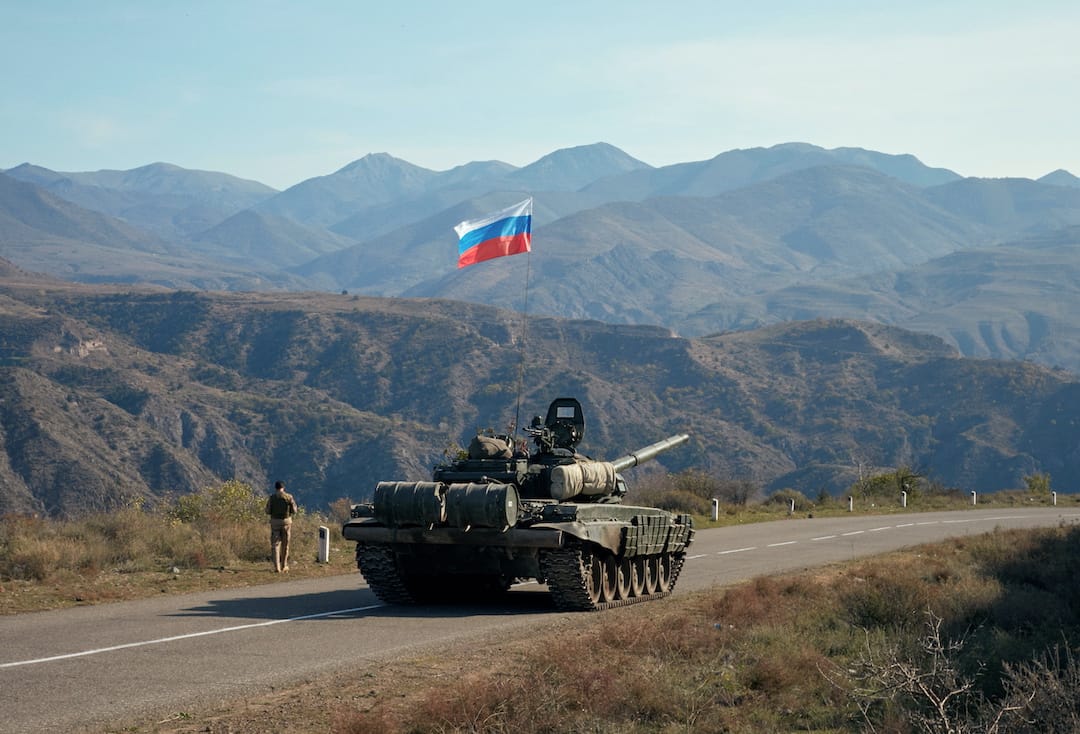 A service member of the Russian peacekeeping troops walks near a tank near the border with Armenia, following the signing of a deal to end the military conflict in the region of Nagorno-Karabakh, 10 November 2020.
Statement / Europe & Central Asia 10 November 2020

Getting from Ceasefire to Peace in Nagorno-Karabakh

A Russian-brokered deal has silenced the guns in Nagorno-Karabakh, the region disputed for decades by Armenia and Azerbaijan. It falls short, however, of a clear, sustainable peace. The parties and foreign stakeholders should work to ensure that the new arrangements have benefits for all concerned.

After six weeks of bloody armed conflict over the disputed Nagorno-Karabakh region, Russia has brokered a full ceasefire between Armenia and Azerbaijan, signed by the presidents of Azerbaijan and Russia and Armenia’s prime minister. In contrast to three prior failed humanitarian ceasefires successively negotiated with the aid of Russia, France and the United States, this one appears to be holding. Its success reflects battlefield realities: Azerbaijan was winning militarily and Armenia faced a crushing defeat. But humiliation cannot be a strong basis for sustained peace. The parties and foreign stakeholders must ensure that the ceasefire holds; they also should take steps to ensure that the new regional order has benefits for all involved.

Yerevan had little choice but to agree to terms under which it gave up everything it had gained from the war that followed Nagorno-Karabakh’s declaration of its desire to separate from Azerbaijan back in the late 1980s. That war ended with a ceasefire in 1994 and left Nagorno-Karabakh de facto independent, if heavily reliant on Armenia, with a self-proclaimed government based in Stepanakert. When fighting stopped, Armenian forces also held seven Azerbaijani regions adjacent to Nagorno-Karabakh. Since then, the two sides have maintained a tense coexistence, with occasional skirmishes and flare-ups at the line of contact and, periodically, the Armenia-Azerbaijan border.

That uneasy balance broke down on 27 September, with renewed clashes followed by an Azerbaijani offensive. In fighting that killed thousands of soldiers and hundreds of civilians on both sides and displaced tens of thousands, the majority among them ethnic Armenians, Azerbaijani troops recaptured most of the adjacent areas as well as southern and parts of north-eastern Nagorno-Karabakh. On 9 November, they announced victory in Shusha (called Shushi by Armenians), one of Nagorno-Karabakh’s largest cities and a site of cultural and historical significance to both Armenians and Azerbaijanis.

The deal brokered by Moscow has ended the fighting but leaves the region short of a clear and stable peace.

The deal brokered by Moscow has ended the fighting but leaves the region short of a clear and stable peace. The parties agreed to a full ceasefire, in effect as of midnight 9-10 November. The agreement’s other provisions, also now being implemented, include a phased withdrawal of the Armenian military from territory outside its internationally recognised borders. This territory includes Nagorno-Karabakh itself, but also Lachin, Kelbajar and Agdam, the three adjacent areas where Armenians still held land. Some 2,000 Russian armed peacekeepers are deploying to Nagorno-Karabakh, excepting those areas of the enclave under Azerbaijani control. A corridor, patrolled by Russian peacekeepers, will connect Armenia to Stepanakert. Russian border police will also secure a new transit route between Azerbaijan and its exclave of Nakhichevan, through Armenian territory. The Russian mission is envisioned as a series of self-renewing five-year terms; renewal will not occur if any party so notifies six months prior to a scheduled extension.

The deal has some clear winners. Azerbaijanis are celebrating: their country has recaptured much of the territory it lost almost 30 years ago, and it has not had to offer any sort of autonomy to Nagorno-Karabakh, as envisioned in past peace negotiations. True, Baku did not get all it wanted: it would have preferred clear, direct control over all of Nagorno-Karabakh; as things stand, the region’s status remains in limbo. Moreover, the deployment of Russian peacekeepers puts an end to one of Baku’s points of pride – the absence of a Russian military presence on its soil since it became independent. But the gains clearly outweigh any putative loss.

Moscow, too, has reason to be satisfied. It not only has demonstrated that it is the only outside party able to deliver peace, but it is also now assured of substantial long-term leverage over both Armenia and Azerbaijan, with its forces in the region for the foreseeable future. Turkey is neither signatory to, nor mentioned in the deal, but Ankara also contributed to Azerbaijan’s victory with both diplomatic and military backing for Baku.

For Armenia, the agreement is a bitter pill to swallow – one that risks throwing the country deep into turmoil.

For Armenia, however, the agreement is a bitter pill to swallow – one that risks throwing the country deep into turmoil. For most Armenians, it amounts to a surrender, both of territory seen as intrinsically Armenian, central to the nation’s history and culture, and of pride in the victories of three decades ago. Thousands of people took to Yerevan’s streets in the early hours after the ceasefire agreement was announced. Protesters beat the speaker of the Armenian parliament, who is now hospitalised, accusing him of being an accessory to treason. Angry Armenians, including the country’s president, have questioned the prime minister’s legal standing to sign the agreement without broader consultation and opposition leaders have demanded that he resign. Riot police are guarding government buildings in Yerevan. It is hard to see how the prime minister, Nikol Pashinyan, remains in office.

Beyond the situation in Yerevan, the safety of thousands of ethnic Armenians remaining in the region is a serious concern. An end to fighting reduces some of the risk to civilians, but the deal makes no provision for safe evacuation of the ethnic Armenians who want to leave Nagorno-Karabakh or the adjacent territories. While those in Stepanakert may be able to depart via the Russian-patrolled corridor, those in other parts of Nagorno-Karabakh or of Lachin that are not contiguous with the corridor, as well as those in Kelbajar, will need guarantees of safe passage if they choose to leave and of protection if any decide to stay. According to the deal, Armenia must hand over control of Kelbajar and Lachin, two of the adjacent areas, by 15 November and 1 December, respectively.

The deal also calls for internally displaced persons (IDPs) and refugees to return to Nagorno-Karabakh and surrounding territories with support from the UN High Commissioner for Refugees (although this body was reportedly not consulted as the deal was negotiated). This provision in theory refers to both ethnic Azerbaijanis – displaced by the fighting in the early 1990s – and ethnic Armenians displaced in recent months. Too, the establishment of a corridor between Armenia and Stepanakert would seem to imply that the signatories envisioned a continued ethnic Armenian presence in that city (albeit not in Shusha or other parts of the region now held by Baku, which will be bypassed by a new connecting road that the parties are to build within the next three years). But although Russian peacekeepers will be in Nagorno-Karabakh, it is not clear what specific provisions will be made for ethnic Armenians who want to remain or return, particularly as there may well be competing property claims between them and returning Azerbaijanis and given the high levels of antipathy between the populations, now reinforced by the brutality of recent weeks.

A deal that Armenians view as capitulation will not be a reliable foundation for more sustained peace.

A deal that Armenians view as capitulation will not be a reliable foundation for more sustained peace. While it will be hard for them to accept it, steps should be taken to mitigate the blow and to prevent Azerbaijani overreach. That means in particular ensuring Armenians can return to, leave or remain in Nagorno-Karabakh safely. Responsibility in this matter lies first and foremost with Russia, which should both cement and clarify the agreement. If Nagorno-Karabakh, or part of it, is to become a de facto Russian protectorate, it will be up to Moscow to negotiate a viable governance and security plan with both Armenians and Azerbaijanis.

In pursuing these efforts, Russia should seek broader international support. It could turn back to the Organization for Cooperation and Security in Europe’s (OSCE) Minsk Group, which oversaw peace negotiations for the past three decades, to help find a way forward for Nagorno-Karabakh itself. It could also work with other UN Security Council members to pass a resolution endorsing the ceasefire, asking the parties to eschew reprisals and protect civilians, and calling on them to negotiate a formal peace treaty. The UN, or potentially the OSCE, which had previously led mediation efforts between Armenia and Azerbaijan, could also consider deploying an international civilian mission to monitor the treatment of civilians and the return of IDPs and refugees.

International donors also have a role to play. They should commit to assist Armenia and Azerbaijan with the costs of resettling people displaced by the conflict and rebuilding infrastructure destroyed by it. Despite its reservations up to now, Armenia should be open to such assistance, which has been on offer for several weeks, and can help the tens of thousands of displaced people who fled Nagorno-Karabakh. Their needs will only grow with the onset of cold weather and the continuing rapid spread of COVID-19 through the hotels and other temporary housing facilities in which they are staying. For their part, Turkey and Azerbaijan should lift their blockade on Armenia and restart trade, as called for in the ceasefire deal.

An imposed peace that leaves a generation of Armenians resentful is no recipe for peace; in a way, it would be a mere mirror image of the reality with which Azerbaijanis have lived for the last three decades. Coupled with the accusations of war crimes coming from both sides, which will also emanate for years to come, it could plant the seeds of the next stage of conflict. At a minimum, a more sustainable settlement will require a deal in which refugees and IDPs are treated fairly, people have access to their homes and economic development benefits all involved.

Reducing the Human Cost of the New Nagorno-Karabakh War

What’s Behind the Fighting in Nagorno-Karabakh