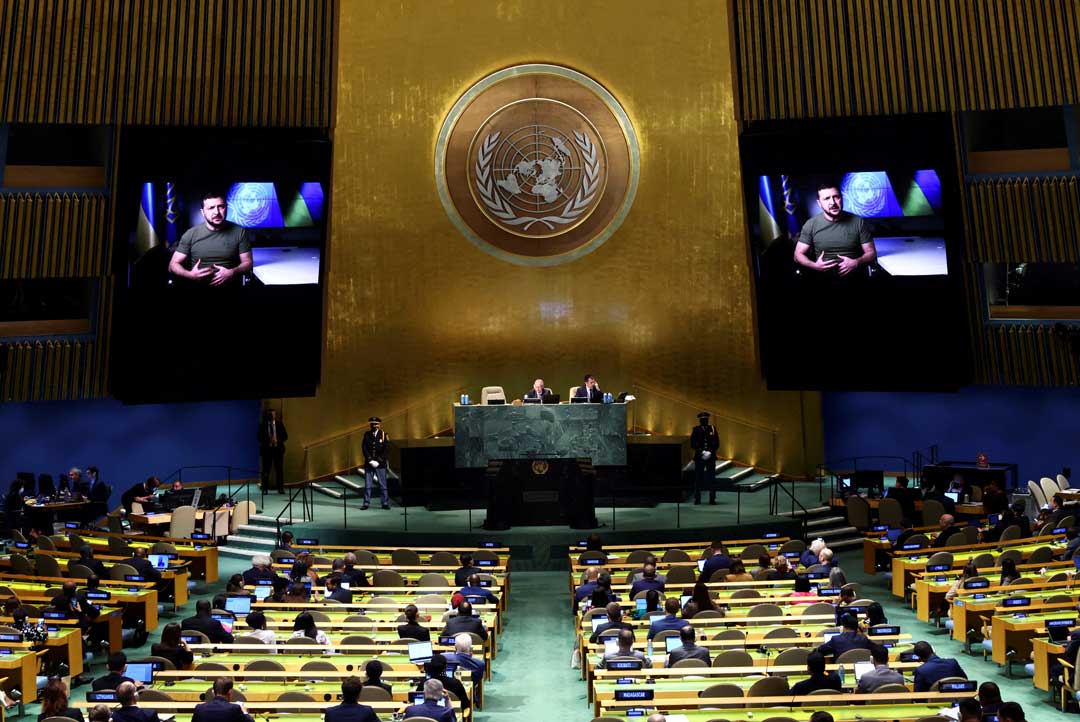 The UN General Assembly has been a notable barometer of international opinion about Russia’s war in Ukraine since it began. With the one-year marker approaching, Kyiv can secure a diplomatic victory in New York with a resolution that affirms principles of sovereignty and territorial integrity.

Diplomats in New York are debating how the UN should mark the first anniversary of Russia’s all-out assault on Ukraine – and the continuing Ukrainian resistance – at the end of February. It is partly a matter of diplomatic ritualism – both the UN Security Council and General Assembly will hold sessions to note the milestone – but it touches on deeper questions about exactly what types of measures UN member states are prepared to support as the war goes on.

Ukrainian officials have proposed tabling General Assembly resolutions that would break new ground by setting out terms for ending the war and holding Russian officials to account for aggression. But some of Kyiv’s allies observe that many UN members – mainly from the Global South but also the West – will baulk at backing such measures. For a range of reasons, the U.S. and major European powers may prefer that Ukraine take a less contentious approach that will also garner the most support possible in New York.

The General Assembly has been a highly visible barometer of international opinion about the full-scale war.

The General Assembly has been a highly visible barometer of international opinion about the full-scale war since it began. It was no accident that it was thrust into this role. In January 2022, a Western diplomat told Crisis Group that Ukrainian officials were ready to wage a “Palestinian” campaign at the UN in the event that Russian tanks rolled across the border. By this term he meant that Kyiv, though at a military disadvantage, would use votes at the UN to isolate Moscow much as Palestinian diplomats and their allies annually turn to the UN to secure majorities condemning Israel.

In the event, Ukraine has proven much more militarily robust than this prediction suggested – but Kyiv and its friends have still made good use of the UN as a platform to lambast Moscow. In March, within ten days of Russia’s all-out invasion, 141 of the General Assembly’s 193 members – including majorities of all its regional groups – voted to condemn the act of aggression. Six months later, despite warnings of “Ukraine fatigue” spreading among UN members, an even larger number made clear that they retained sympathy with Ukraine as regards its right to sovereignty and territorial integrity. After Russian President Vladimir Putin claimed to annex four regions of Ukraine, 143 members backed an October resolution rejecting the move as illegal (Map 1). 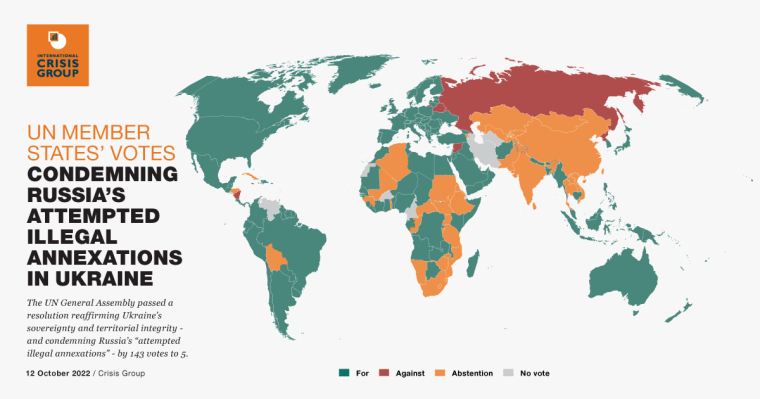 But those numbers need to be understood in context. Many of the countries that voted in principled support of Ukraine – such as Brazil, Indonesia and Arab states – declined to join international sanctions on Russia. Moreover, quite a few countries that joined the overwhelming March and October majorities at the General Assembly declined to vote in favour of resolutions that applied more concrete penalties to Moscow. Only 93 UN members backed a resolution suspending Russia from the UN Human Rights Council in April (press reports at the time suggested that the Russian mission to the UN had warned that Moscow would find ways to penalise those who backed the initiative, which was led by the U.S.). A November text endorsing the idea of a register of damages to track Russian destruction in Ukraine as the basis of future reparations got 94 votes. Western diplomats may not have lobbied as hard for this one as they had for the annexation resolution, because they assumed that it would pass on a smaller vote and nonetheless serve a useful purpose, but some countries that abstained, such as Indonesia and Brazil, suggested that talking about reparations could inhibit future diplomacy with Russia. (Map 2 shows which countries voted for both resolutions and which supported only the anti-annexation text.)

As it looks toward February, Kyiv can assume that a resolution based on the March and October texts would gain similar levels of support, but it may seek to go further. In recent weeks, Ukraine has aspired to push through resolutions involving more pointed challenges to Russia. Ukrainian diplomats have suggested that the General Assembly could use the opportunity of the February anniversary to endorse President Volodymyr Zelenskyy’s ten-point “peace formula” from November, which not only highlights the need to reaffirm the country’s territorial integrity but also includes the idea of a special tribunal that could try Russian leaders for the crime of aggression, possibly including Putin. Ukraine’s second proposal is for a resolution that zeroes in on the need to hold Russia accountable for its actions during the war, again raising the possibility of an aggression tribunal. Ukrainian experts say they think establishing Moscow’s status as an aggressor could help Kyiv justify its efforts to claim frozen Russian funds in the U.S. and Europe, though this idea is questionable.

Some European officials – including European Commission President Ursula von der Leyen – have encouraged the idea of an aggression tribunal. But, at least at the UN, many of Ukraine’s partners worry that these proposals risk both complicating future engagement with Russia and alienating potential supporters in New York. Because an international tribunal would inevitably focus on putting the top levels of Russian leadership in the dock, it could be seen as creating an existential risk for Putin and/or his circle – perhaps leading him to react with escalatory steps. This possibility makes certain UN members, including some of Ukraine’s weightier friends, uneasy. Latin American officials note that Ukraine has yet to sign the Rome Statute, the basis for full membership in the International Criminal Court, which they suggest complicates its appeals for international justice. Some of Ukraine’s partners worry that it could suffer a public setback if it tables one or both resolutions and secures significantly fewer than the now symbolic 140 votes, especially as the media will focus on that number rather than the resolutions’ content.

Similar doubts attach to another idea floated by Ukraine to organise a “peace summit” at the UN on or around the anniversary of the Russian offensive on 24 February, potentially featuring President Zelenskyy himself but almost certainly excluding Russia. It is not clear that non-Western leaders would attend such an event, and some might work counter to Ukraine’s designs by proposing alternative peace plans (such as an immediate ceasefire) that Kyiv believes play to Moscow’s advantage. It is also possible that Zelenskyy would face media criticism for visiting New York, for uncertain gains, rather than staying at home to mark an important anniversary.

For all these reasons, many of Ukraine’s friends – including the U.S. and major European allies – would likely prefer Kyiv to adapt its ambitions, including by aiming for a single resolution in February. Ukraine is more likely to gain support for initiatives at the UN if it tables them one by one, rather than promoting several ideas simultaneously. It would also be helpful if Ukraine’s international partners were to settle on a common approach to accountability issues. Crisis Group understands that Ukraine has recently indicated that it is willing to push back the accountability resolution to March or later, so as to secure greater backing. At the same time, European diplomats more sympathetic to Kyiv’s approach respond that Ukraine should at least be able to test the potential level of support for its resolutions.

Ukraine may be best off if it aims for what is readily achievable rather than (...) trying to secure resolutions that break new ground.

Ukraine may be best off if it aims for what is readily achievable rather than investing a great deal of political capital in trying to secure resolutions that break new ground in February. General Assembly documents rarely shape conflicts – as generations of Palestinian diplomats can tell their Ukrainian counterparts – but they can boost morale and send an important signal about member states’ commitment to the values and principles enshrined in the UN Charter. Kyiv should set its sights on achieving this end. Heading into February, it could score a limited but clear win by tabling a simple resolution reaffirming the core principle of its struggle over the last year that the General Assembly has already recognised: its right to emerge from this war as a sovereign state in command of its territory. That remains the crux of the matter.