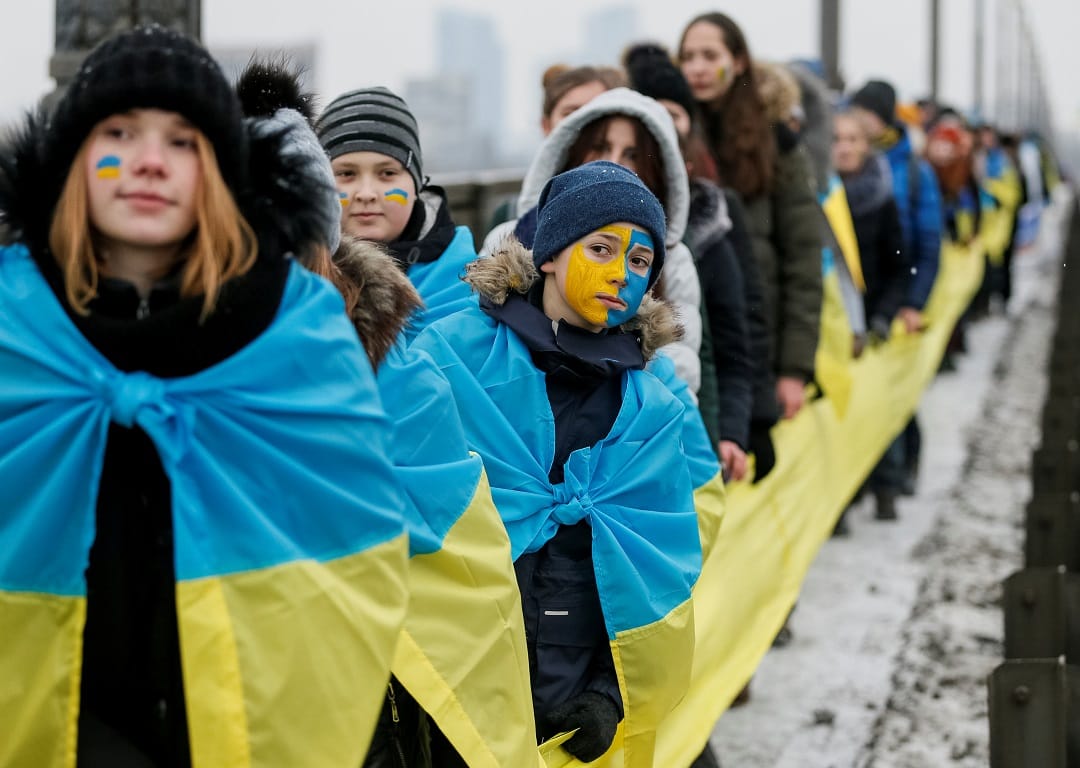 People carry national flags on a bridge while forming a human chain across the Dnipro River during celebrations for Unity Day in Kyiv, Ukraine, on 22 January 2018. REUTERS/Gleb Garanich
Commentary / Europe & Central Asia 20 March 2018

To Reunite Ukraine, Kyiv Must Overcome Its Own Prejudices

Four years after Russia’s invasion, psychological barriers are compounding the physical divisions of Ukraine. While many Ukrainians have turned to the West, millions of conflict-affected citizens are being excluded, creating new obstacles to any eventual reintegration of the country.

It is common for Ukrainian officials and their international backers to say that Russia’s 2014 invasion, which was partly motivated by Moscow’s anger at Ukraine pivoting toward Europe and the U.S., has unified the country and turned it even more resolutely westward. In one sense, they are correct: Moscow’s aggression has consolidated support among many Ukrainians for membership in the European Union (EU) and the North Atlantic Treaty Organisation (NATO).

But talk of unity among Ukraine’s 44 million people is misleading. It leaves out over two million inhabitants of Crimea, annexed by Russia, and up to three million residents of Donbas, the eastern region of Ukraine partly controlled by Moscow-backed rebels. Millions more are displaced within Kyiv-controlled areas or have left for Russia. A 450km frontline cuts across Donbas, separating its major cities – now under separatist rule – from suburbs, and neighbours and families from each other.

A darker theme often bleeds into remarks about unity. Many in Kyiv say Ukraine – at least for now – is better off without the people of Donbas, who they argue have been anti-democracy and pro-Russia at least since the Soviet Union’s downfall. According to this logic, the exclusion of Donbas residents from the political process underway since the start of the conflict has been key to Kyiv’s efforts to pass progressive reforms and draw closer to the Euro-Atlantic zone. But in reality, the reform agenda – particularly the battle against corruption – has bogged down, while Kyiv’s attitudes toward Donbas residents raise doubts about its commitment to the democratic, inclusive values that the EU espouses. They will also make reintegrating the war-torn region – something Kyiv has promised its own citizens and the international community that it will do – considerably more difficult.

[In eastern Ukraine] many people have historically felt kinship both with their neighbours in the Russian Federation and their fellow citizens to the west.

Dismissive attitudes toward Donbas citizens can be glimpsed in legislation like the December 2017 law on policy toward the territories Kyiv regards as Russian-occupied. Commonly known as the “reintegration law”, the document contains no concrete provisions for bringing the breakaway regions back into the fold. Another draft law, on “collaborators”, would potentially apply this term even to rank-and-file civil servants in the separatist administrations. These views are also evident in periodic calls in parliament to isolate the breakaway territories – that is, to close down the five checkpoints where people cross the front to visit family, buy goods and collect pensions – until separatist-held areas weaken to the point where “they either collapse”, as one Kyiv commentator put it, or the Ukrainian army can retake them.

Supporters of these measures often couch their views in humanitarian terms. Yet they struggle to hide their hostility toward the people of Donbas. Last autumn, a parliamentary opposition leader declared that renouncing Kyiv’s responsibility for separatist-held areas would protect their inhabitants, as the international community would be obliged to defend them from rights abuses for which Moscow would have sole responsibility. But he also called the Western preoccupation with “saving the three million people of Donbas” misguided: the priority, he implied, should be European-minded Ukrainians – like the schoolchildren he had visited in the centre and west of the country, whose “shining eyes” showed no trace of what he called Soviet-style servility and suspicion. A top security official who was a driving force behind the reintegration bill has said isolating the self-proclaimed republics would hasten their demise – and their residents’ return to the Ukrainian family. Yet according to a close adviser, this senior security circle is ambivalent at best when it comes to the question of whether Donbas civilians are Ukrainians. “I keep asking [my colleagues]”, the adviser said, “‘do you want to liberate the land or the people?’”

Opinions polls suggest most Ukrainians harbour little animosity for the civilians of the conflict-torn region, whom they see largely as victims. Yet contempt for locals pervades the military and civilian bureaucracy in Kyiv, and even the aid operations in the Kyiv-controlled section of Donbas, where roughly 200,000 civilians live along the front. According to a widespread – and partly ahistorical – narrative, people in Donbas are descended from petty criminals whom the Soviet government imported from Russia after Stalin’s manmade famine of 1933 decimated the Ukrainian peasant population. In conversations over the past autumn, several high-ranking frontline officials, as well as a priest involved in humanitarian work, used variations of this trope to explain their difficulty working with Donbas residents, whose origins they said made them mercenary and often hostile to “native” Ukrainians. This narrative ignores the fluidity of identity in the country’s east, where many people have historically felt kinship both with their neighbours in the Russian Federation and their fellow citizens to the west. It also conveys a perverse acceptance of the Kremlin’s rationale for its invasion – that the values of people in eastern Ukraine are incompatible with those in the rest of the country.

While some Kyiv representatives in Donbas are sympathetic to civilians on the frontline, they often interpret the grim living conditions there as signs of innate immorality. Many frontline residents, who are disproportionately female, have lost their livelihoods to the war: the cities where they worked are in separatist-held territory and the fields where they sowed crops are mined. Prostitution is all too common. During a community outreach expedition, a soldier casually mentioned a teenage girl in an oft-shelled village whose father was “making money off of her”. A brief discussion followed about whether to intervene, which he concluded by saying that “maybe she’s happy”, as she had not yet left.

It was a sad fact, a commander present explained, that many civilians chose to “sit in the village and receive aid” rather than go somewhere else. He did not mention that Kyiv has no mechanism to relocate civilians in frontline areas and no durable solution for the displaced, or that this village, like many nearby, was on a mined road closed to non-military vehicles. A humanitarian volunteer who had previously worked in the presidential administration described frontline residents as people “with a minimum level of human development”, many of them single mothers by choice, content to prostitute themselves and their children to soldiers.

In the name of building a European-style state based on rule of law and respect for life, Kyiv may have chosen to treat millions of its citizens as expendable.

Such perceptions feed the notion that reintegrating the people of Donbas should not be a priority. The humanitarian volunteer, for one, said she could not stomach the idea. Schoolmates of hers from western Ukraine had died in the war, sacrificing themselves “to build an entirely new society”. Making concessions to the separatist-held areas – that is, the self-government and amnesties to which Kyiv has committed itself as part of the Minsk agreements that were supposed to end the Donbas conflict – would be an affront to the memory of her schoolmates. “What did all these guys die for, only for us to live together? It would be a bad peace.”

But for those living near the frontline, rebuilding links with their neighbours is critical and the notion of “bad peace” largely meaningless. Most, regardless of their political leanings before the war, now dream of normalcy and want the war to end through “political compromise” – a phrase that, in light of Moscow’s past intransigence, makes much of the Ukrainian intelligentsia shudder. While frontline residents generally lack the energy for political hatred, their anger is aimed at hawkish attitudes in Kyiv, not people in separatist-controlled territories. A conversation with teachers in a frontline town brought this home. When I asked whether the arrival of new students whose families had moved from separatist-held territories had provoked conflict at school, they let me know the question was absurd. “We knew we were one people before the war, and we know that now”, one said grimly. Asked about her thoughts on isolating these territories, she snapped, “it shouldn’t even be under discussion”.

Russia’s aggression – which many Donbas residents acknowledge – has divided Ukrainians physically and mentally. But the deepest rift is not between “pro-Russians” and “pro-Ukrainians”. It is between those who portray the war as an integral part of nation building for Ukraine – notwithstanding the stalled reforms – and those for whom nation building is moot as long as the war grinds on. The former have the upper hand. In the name of building a European-style state based on rule of law and respect for life, Kyiv may have chosen to treat millions of its citizens as expendable. If Ukraine and its Western backers are serious about the values they proclaim, they must recognise this self-defeating approach for what it is.

Ukraine: Will the Centre Hold?

Can Peacekeepers Break the Deadlock in Ukraine?