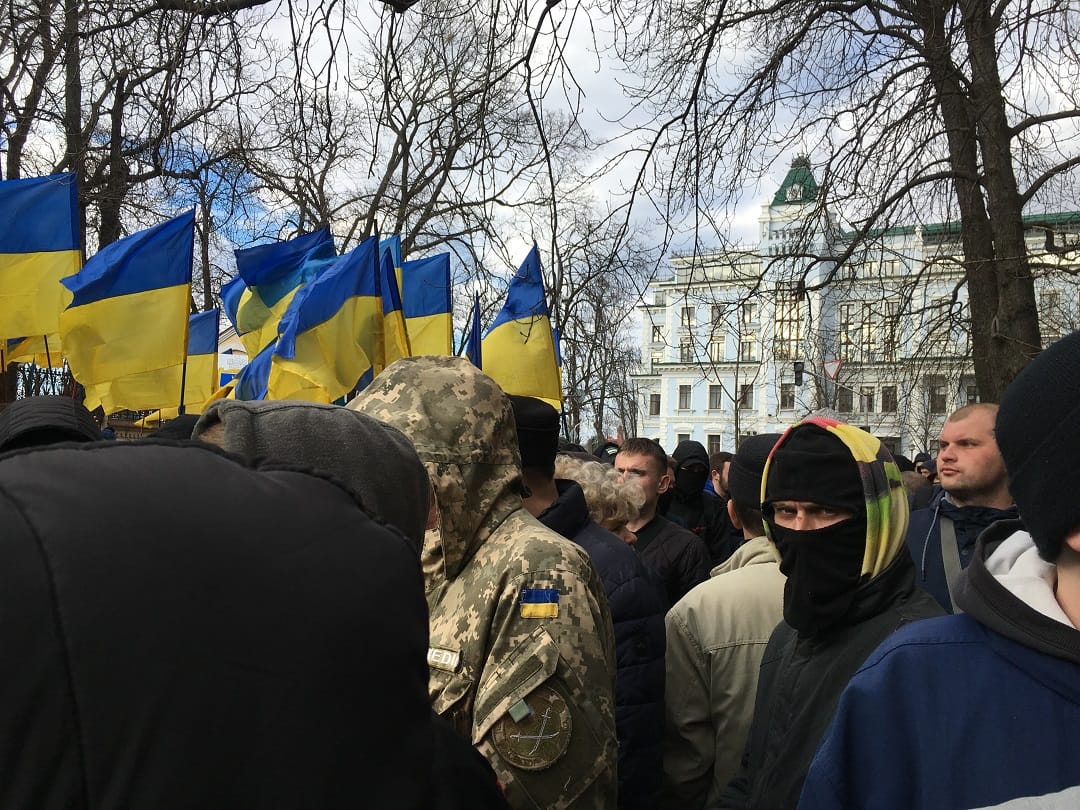 A Shadow over Ukraine’s Presidential Election

With Ukraine’s establishment forecasting doom after the presidential runoff, the far right’s influence on politics is impossible to ignore. Its resurgence is both a symptom and a cause of the country’s ills: there is less daylight between it and the political mainstream than either admits.

On 31 March, Ukrainian President Petro Poroshenko suffered a double-digit defeat in the presidential election’s first round to comedian Volodymyr Zelensky, whose only previous political experience is playing the president on television. The incumbent is widely expected to lose a second and final time in Sunday’s runoff vote. Zelensky’s campaign has hinged on shying away from policy specifics, while appealing to voters who are wary of Poroshenko’s increasingly familiar rhetoric about containing Russian aggression and promises of Westernisation. The comedian blames Moscow for the ongoing war in eastern Ukraine, but says both sides should “just stop shooting”. He says he favours integration with the West, but questions whether European states will ever treat Ukraine as a peer.

Apocalyptic predictions abound about his potential victory. Poroshenko says his opponent is a Kremlin plant who could bring about the death of the Ukrainian state. Poroshenko’s harshest critics, many of them also concerned about Zelensky’s inexperience and flippancy, have claimed that the sitting president could use voter suppression tactics in order to prevail on election day. Some commentators even see a plot by the country’s substantial far right to help elect Zelensky and then seize power in a coup.

Sunday looks increasingly unlikely to bring large-scale violence, as there are no signs of Poroshenko preparing to disrupt voting or rig the results, and the far right does not appear to be planning a show of force. But the dire prognostications and the absurdities of this campaign nevertheless reflect real concerns with which Kyiv and its friends will have to contend. For the past five years, Kyiv has pledged to restore Ukraine’s territorial integrity after Russia’s invasion, fight corruption and adopt European standards of good governance. Yet amid continuing reports of high-level corruption, including in the defence sector, these pledges have increasingly felt like hollow slogans and ploys to attract Western aid. This has created fertile ground for the rise of protest figures – people who, like Zelensky mock the apparent insincerity of these noble goals – or, like the far-right groups that have played such a noisy role in the campaign season, propose unworkable or destructive paths to achieving them.

Though they do poorly in elections, far-right groups’ patriotic credentials and anti-corruption stances strike a chord with large numbers of Ukrainians who might otherwise be lukewarm, at best, toward their views. At the same time, some of the far right’s positions mirror and may influence mainstream sentiments. In that sense, they are both a symptom of Ukraine’s political system’s sickness and a cause thereof.

The Far Right Makes Its Mark

Proponents of Ukraine’s integration with the West tend to downplay the significance of far right groups. But their underwhelming electoral performance obfuscates the major role the various groups and their viewpoints play in public life. The ideas that the far-right parties propagate, from “traditional” values to militarism to disparagement of civilians living in the eastern territories occupied by Russia, are shared by powerful mainstream politicians. The groups themselves are well organised and disciplined; many members own firearms and have combat experience. Crucially, they take visible stands on issues with deep public resonance, from budget transparency to conditions in orphanages, which generates a certain degree of passive support from citizens who may be unaware of their violent, white supremacist, patriarchal ideology – or are unbothered by it.

Ukraine’s far right, in its current iteration, grew out of the 2013-2014 Maidan protests.

Ukraine’s far right, in its current iteration, grew out of the 2013-2014 Maidan protests that ousted president Viktor Yanukovych. Then, right-wing groups stood alongside students and frustrated members of the middle class to bring down a regime that had thumbed its nose at them all. After Yanukovych fled the country and a Russian-backed insurgency erupted in the east, far-right and nationalist groups formed militias that helped fend off enemy troops as Ukraine’s weakened armed forces rebuilt themselves. While Kyiv’s new government fashioned itself as centrist and pro-Western, it welcomed the militias’ support. Meanwhile, Moscow’s feverish characterisation of these groups as fascist all but ensured that Kyiv officials and their Western friends would rally to defend these “patriots”.

While many fighters in the Azov battalion – a prominent far-right militia that came together in 2014 – were partly motivated by a desire to defend Ukraine against corrupt leaders and an oppressive neighbour, it was no accident that they wore crests and used rhetoric that had Nazi echoes. Journalists highlighted how fighters’ professions of love for homeland would sometimes dissolve into approving references to Hitler. The conduct of these militias also raised concerns, as rights groups documented their possible war crimes. Still, many of Ukraine’s international supporters as well as its ordinary citizens have tended to see the rightists as self-sacrificing if confused young men, and criticisms as a product of either Kremlin propaganda or overwrought liberal anxiety.

Though the government took steps to bring the Azov battalion and similar militias under state control, their leaders retained political prominence, and some of the largest groups, including Azov, were integrated into Ministry of Interior forces, often as intact units. National Corps, Ukraine’s largest right-wing party, is led by key Azov figures; its sister vigilante group National Militia is rumoured to have links to Interior Minister Arsen Avakov. (He denies any ties, but has defended the vigilantes’ right to conduct unarmed street patrols.)

It is only recently, when right-wing groups have begun publicly protesting against the incumbent government en masse, that they have faced real pushback.

Protesters from National Corps, which claims it can mobilise 20,000 activists at any given time, clashed with police two weekends in a row in March, compounding pre-existing concerns about election violence. The protests were aimed at Poroshenko and his circle, particularly Oleg Gladkovsky, the former deputy head of the National Security and Defense Council, who was fired in February after press reports exposed his apparent involvement in a defence sector corruption scheme. Activists called on police to arrest him and others suspected of profiting from crooked deals that siphoned off money from Ukraine’s armed forces, even as its members continue to fight and die in the east. The focus on corruption helped the protesters portray themselves as legitimate and cast the government in an unflattering light.

Following the 9 March protest, Kyiv accused National Corps of playing into Russia’s hands – the same charge it had once hurled at the right’s critics. Interior Minister Avakov announced that protesters had injured 22 police and reprimanded them. A handful of National Corps members were listed on Myrotvorets, a self-styled non-governmental database, created by two prominent officials, which purports to name “pro-Russian terrorists, separatists, mercenaries, war criminals and murderers”. The president’s party issued a statement saying the protest was the work of “pro-Russian revanchists and exiled oligarchs” aiming to “bring down the democratic, pro-European government”.

An Uncertain Hold on the Moral High Ground

Despite National Corps leaders’ attempts to draw parallels, their March protests bore little resemblance to the start of the uprising that overthrew Yanukovych. The idealists who formed the core of that movement in its early days were absent from the crowds of young men wearing face masks and well-practiced glares. National Corps is a white supremacist group that talks of “reconquering” European soil and whose members have attacked Roma camps. Its members appear to have ties to American, European and Russian neo-Nazi groups. One of their regional leaders on the morning of 15 March posted the Christchurch mosque shooter’s footage on social media with the words “anti-terrorists win”. That footage showed one of Azov’s favoured symbols, the black sun, on the shooter’s vest.

In Ukraine, the government’s ability to hold the moral high ground over groups like National Corps is uncertain.

But in Ukraine, the government’s ability to hold the moral high ground over groups like National Corps is uncertain: the far right’s accusations of corruption appear at least partly justified. The protesters’ rowdy calls to arrest Gladkovsky and his associates merely channel the anger many Ukrainians feel at having chased out their kleptocratic leaders in 2014, only to see their replacements engage in what appears to be war profiteering. After watching a video of marchers kicking at policemen’s shields on 9 March, a Kyiv intellectual called the footage a vivid embodiment of popular sentiment.

Meanwhile, some – though far from all – of the Poroshenko government’s members and vocal supporters are themselves ultraconservatives with militaristic and exclusionist ideas. For example, active members of National Guard units plug the president on social media while posting hate-filled rhetoric about eastern civilians and rejoicing at attacks on Ukrainians who insist on speaking Russian. One of the country’s top-ranking security officials reportedly refers regularly to eastern civilians as traitors who are now getting their just desserts.

The Poroshenko government and their far-right opponents share a view of the war in the east as a nation-building exercise. They not only recoil at the idea of reintegrating breakaway areas as semi-autonomous entities through which Russia could maintain leverage over the country’s economic and foreign policy – a wariness many Ukrainians share – but behind closed doors, speak of the war in positive terms as a way to forge a national identity distinct from Russia’s. To both groups, the ongoing trickle of civilian and military casualties – as well as losses among the Russia-backed armed groups, where the vast majority of those dying on the front lines appear to be Ukrainian citizens – is a cost they are willing to accept for what they believe history will view as the dawn of the country’s independence.

Sunday’s vote will probably proceed peacefully. But the campaign has highlighted risks that will persist well beyond. Over the past five years, many talented public servants have pressed hard to reform corrupt institutions, make the country safer and hasten its reintegration. At the same time, however, the Poroshenko government has helped legitimise the far right’s ideology by embracing a militaristic brand of nationalism, strengthened its capacity to use force by loosening the state’s monopoly on violence and fed its sense of righteous anger by fuelling suspicion that the government is presiding over war profiteering. Whoever wins on Sunday will need to find a way to remove some of the momentum behind this growing movement lest it further destabilise the country. Convincing the public that the government’s primary aim is to strengthen and reunify the country – rather than merely profit off the promise to do so –would be a good place to start.

“Nobody Wants Us”: The Alienated Civilians of Eastern Ukraine