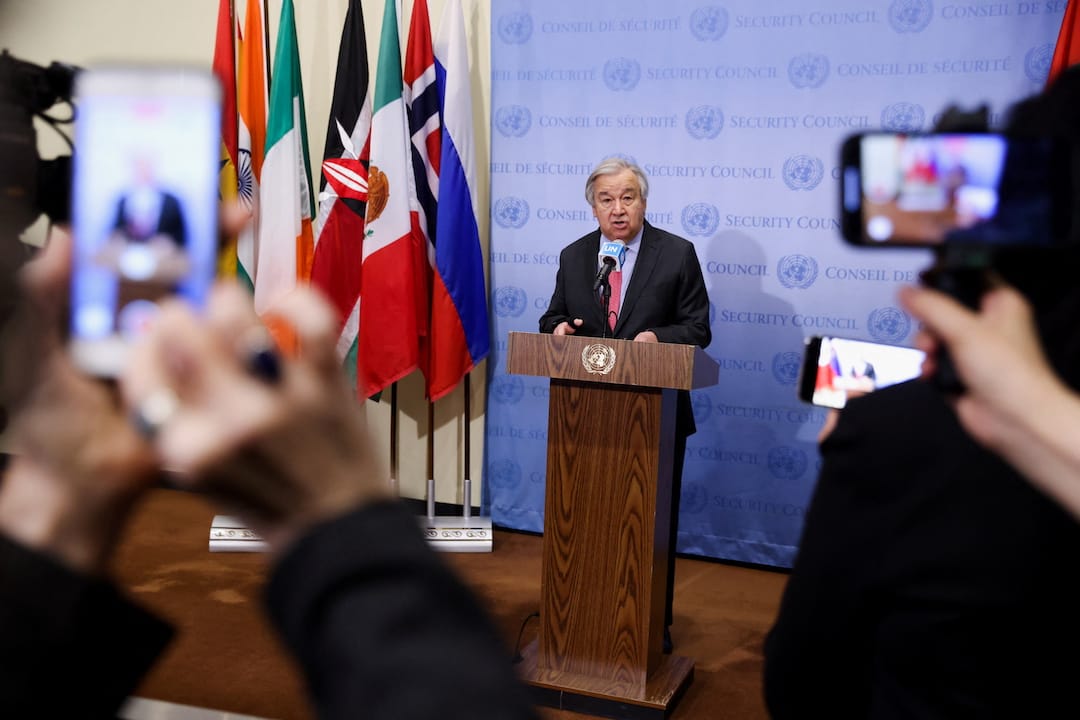 The UN Secretary-General is on his way to Moscow and Kyiv. With fighting still raging, he may find his diplomatic options limited, but nevertheless he should table proposals both for how to save lives now and how the UN might help with future peace talks.

UN Secretary-General António Guterres is travelling to Moscow and Kyiv. He will meet Russian President Vladimir Putin on 26 April, and then with Ukrainian President Volodymyr Zelenskyy on the 28th. The Secretary-General’s visit will take place against the backdrop of the hostilities in eastern and southern Ukraine. He is in no position to act as a peacemaker in the short term, as both sides still believe that they can gain the upper hand on the battlefield and he has no new incentives to offer that would be sufficient to persuade either party to change course. Nonetheless, Guterres can use this opportunity to press for relief for Ukrainian civilians – especially those trapped in the devastated city of Mariupol – and give the two presidents some ideas as to how the UN could facilitate and support credible peace initiatives in the future.

The Secretary-General has had no major diplomatic role in the war to date. Like many other informed observers, he was reportedly sceptical of U.S. intelligence at the start of the year that Russia planned a full-scale invasion. Once the invasion was under way, he condemned it in clear terms and called on Russia to withdraw, drawing accusations of bias from Moscow. Crisis Group understands that President Putin has since turned down a number of requests for telephone calls with Guterres. While it may be a small positive sign that Moscow will host him, the Secretary-General will need to avoid looking like he wants to curry favour with Russia after being on the outs with the Kremlin. President Zelenskyy – who has decried the Security Council’s inaction over the war – has called the Secretary-General’s decision to visit Moscow first and Kyiv second “simply wrong”.

Given his limited diplomatic options, the Secretary-General has tried to address the war’s consequences inside and outside Ukraine from other angles. He has focused on humanitarian operations inside the country – where the UN has over 1,000 staff – and on drawing attention to the war’s impact on global food, energy and commodity prices. The UN may yet play a crucial role in coordinating efforts to mitigate the war’s international economic fallout. But given the central place of peace and security in the organisation’s charter, it is hard to see the Secretary-General giving up on diplomacy while the war rages.

In both Moscow and Kyiv, Guterres is likely to find the atmosphere chilly at best. Russia has said the Secretary-General will “be received” by President Putin on 26 April, adding that he will also have talks with Foreign Minister Sergey Lavrov. This language does not suggest that the Russian leader is open to an extended discussion. Even if he were, it might not make much difference. In March 2014, shortly after Russia annexed Crimea, and with crisis building in eastern Ukraine, then Secretary-General Ban Ki-moon met with Putin for what he called a “very productive and constructive meeting”, but with no observable impact on Russia’s subsequent actions. Zelenskyy’s criticism of how Guterres will sequence his visits suggests that the Secretary-General will also get a sceptical reception in Kyiv.

Secretary-General Guterres should nonetheless aim to table specific proposals to ease the harm done by the war in his meetings in Moscow and Kyiv. He can use his meetings with the two presidents both to lay out immediate humanitarian priorities – to help ensure that he makes the most of this trip to save lives – and also to share some thoughts about how the UN could support long-term efforts to achieve an eventual peace. Three themes that Guterres should emphasise in particular include:

The Secretary-General should avoid pressing for a ceasefire

There are topics that Guterres should avoid. While talking about potential UN support for peace talks, the Secretary-General should avoid pressing for a ceasefire, which both parties will likely reject as playing to the other’s military advantage by allowing breathing space for rest and resupply. He should also eschew premature speculation about what a final settlement might look like. As Crisis Group has noted, it is conceivable that the UN might one day be invited to send military monitors to observe a disengagement of Russian and Ukrainian forces if hostilities cease. But such options remain entirely hypothetical, and it would be distracting to discuss them this week.

The Secretary-General will also have step gingerly around some difficult moral and legal issues. In Kyiv, if not in Moscow, his political interlocutors and the media may press him on whether President Putin is a war criminal, and if Russian politicians and generals should face tribunals. He will have to avoid making pointed remarks on these matters, whatever his own views of their merits. The Secretary-General has already highlighted the war’s illegality and immorality. His job now is to focus on maximising the UN’s humanitarian and diplomatic functions in Ukraine.

Finally, there is an important question concerning the Secretary-General’s itinerary. He and his advisers should consider whether, in addition to visiting Kyiv, he should also go to other parts of Ukraine to see the scale of war damage. The most dramatic move he could make would be to go to Mariupol or its environs to urge evacuation of civilians. Making this trip would send a powerful signal and symbolise that the UN understands the severity of the war’s human costs. The Secretary-General’s security detail is unlikely to welcome the idea of him visiting an active war zone, although his predecessors have taken such risks. (Boutros Boutros-Ghali flew into Sarajevo when it was under siege in 1993 for example.) If it proves impossible to go to such a place, Guterres should take the time to speak in person with civilian victims of the war during his time in Kyiv.

For all the frustrations he is likely to encounter, the Secretary-General’s trip is a welcome development. It may require an international figure of his status and seniority to hammer out agreements to assist civilians in Mariupol and other centres of fighting, even as the war continues. Similarly, there may come a time in the war when the UN’s good offices can help facilitate the de-escalation that cannot come too soon. While the Secretary-General may struggle to make near-term progress, it is essential that the UN continues to look at every avenue for easing the suffering of Ukraine.

Maintaining a Coalition in Support of Ukraine at the UN