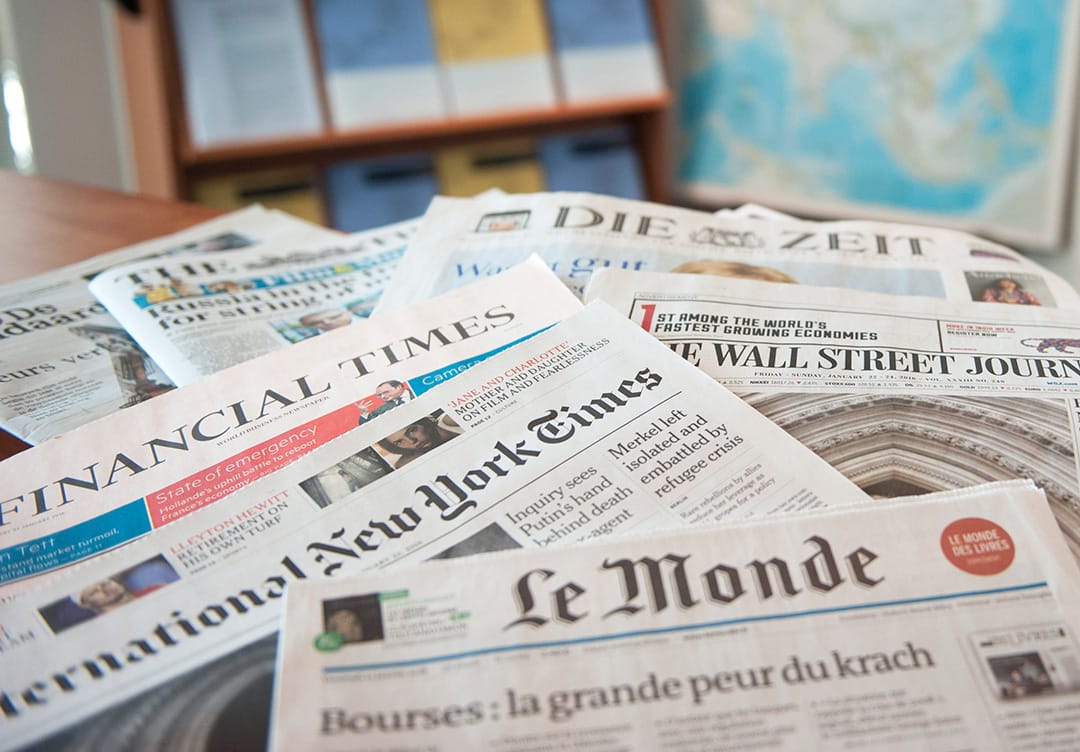 Behind the Headlines with the International Crisis Group

In 2015, Crisis Group logged more than 3,300 times that significant global, regional and local publications quoted our analysts or commented on our reports. This figure is not the tally of 24,000 references to us found in electronic trawls of all digital media and reprints. Nor does it count social media mentions or the publication of 182 opinion pieces, more than one third of them in languages other than English.

In fact, citation numbers are only the visible tip of the broad, deep influence Crisis Group exercises through the media as it seeks to build support among policy and opinion makers for its ideas on how to reach peaceful settlements and end wars.

Many reporters – just like diplomats – read Crisis Group reports as their first detailed briefing on a conflict, often in the plane when flying toward a troubled region. The face-to-face meetings or interviews with Crisis Group’s field experts that frequently follow this introduction further shape the views of officials or correspondents seeking to understand a crisis or conflict.

3 April 2013
There is a maturity about the Kurdish question that was not present 10 years ago. Financial Times

Sometimes this is publicly recognised when reporters use a named citation to signal an intellectual credit, as when an Economist article reproduced many of the main arguments of our 2015 report on Chechnya, the Financial Times assessed Turkey’s south-eastern insurgency in 2013, or a New York Times article analysed a wave of protests in Iraq in August 2015 – a week after our conflict alert on precisely the same subject. The Christian Science Monitor editorial board saw our report on how to ease Muslim-Jewish tensions around Jerusalem’s Holy Esplanade in 2015 and wrote a commentary recommending it to readers, saying “it is refreshing when a respected research outfit, the International Crisis Group, takes a bold and counterintuitive approach”.

1 July 2015
...it is refreshing when a respected research outfit, the International Crisis Group, takes a bold and counterintuitive approach. Christian Science Monitor

Even a small footnote can reflect how our research can have far-reaching impact. Twice now, for instance, the New York Times has tapped our Turkey project for their unique data collected since 2011 on the casualty toll from the country’s south-eastern insurgency. Times staff then turned the figures into infographics that demonstrated how grave and widespread the crisis really was.

Crisis Group’s work can also exert influence behind the scenes, impacting the heart of the comment pages of the world’s most influential newspapers. As well as a reflection of our credibility, this is often thanks to informal, long-term personal connections; in 2014 a Guardian commentator talked for an hour with our Turkey analyst, and the next day her op-ed echoed our view that communication between Turkey and Europe must be maintained.

Our flagship reports and timely commentaries lay important foundations for opinion-makers’ thinking. In 2015, we published a report drawing attention to Bangladesh’s political crisis, the divisiveness of the tribunals set up to try crimes committed during the country’s 1971 Liberation War, and the incipient revival of extremist groups and criminal networks. Three days later, the editorial board of the New York Times wrote a rare column about Bangladesh, picking up Crisis Group’s concerns that the country was “on the edge of political chaos” and pointing to the intransigence of Bangladesh’s political parties, a key criticism in our report. In a letter seeking a meeting with us, the lawyer of one of those parties, Jamaat-e Islami, refuted any link between his party and street violence. But he saw another connection not mentioned in the Times:

“Your report paints an accurate, albeit distinctly bleak picture of the current situation .... The principal concern at this stage is that your report has been used in a New York Times editorial and is being used by the government of Bangladesh”.

It is not uncommon for Crisis Group to have a debate-shaping role but remain anonymous. When some of Libya’s warring factions signed a UN-brokered peace deal in December 2015, Crisis Group was a rare voice warning that the process should not be rushed. The BBC’s report five days later noted the same criticisms, precisely echoing Crisis Group’s language: the deal was a gamble, the absence of a security plan was dangerous, and the accord could simply divide Libyans further. Its source: “some observers”.

On 26 March 2015, we published a statement on Iraq calling for the Baghdad government to pull Shiite militias from the front lines of the conflict with the self-styled Islamic State, and reinforced this with a commentary by our staff published in Reuters Opinion. The New York Times certainly noticed: a Times op-ed editor messaged one of our staff with a light-hearted comment on the title of our text (Defeating the Iraqi State, One Victory at a Time). The next day, the newspaper’s editorial board published a commentary arguing that Iraqi government troops should replace Shiite militias; op-ed pages in the Financial Times and Abu Dhabi’s The National soon followed suit. Over the next two weeks, the Iraqi government, now also under pressure from the U.S., reined in the militias.