This weekend, when NATO leaders meet in Chicago, they will unveil a series of new projects, among them, apparently, a program to develop and expand the use of unmanned aerial vehicles – or “drones” – so as to confront the security threats of the future and make better use of tighter budgets. Used first for surveillance, and increasingly for strikes, drones have considerable operational attraction. But killing with these stealth weapons stretches legal boundaries to the breaking point, and alienates people in Pakistan, Somalia, and Yemen, countries in which neither NATO nor the United States, its most powerful member, are actually fighting wars – unless we count the "war on terror" as having opened the entire world as a battlefield.

NATO’s attraction to drones, almost exclusively U.S.-built at the moment, is understandable. They are relatively cheap, can be deployed quickly in inhospitable terrain over vast distances, and help keep troops and airmen out of harm’s way. But this push-button solution to warfare poses very real risks to civilians, especially as targeting criteria deteriorate to the point where a special rapporteur to the United Nations has described them as a “vaguely defined licence to kill.” The rules for using strike drones should be clarified, and the tests that determine who is a legitimate target should be explicit. The standards that NATO sets and its respect for international law will stand as a powerful example to all, especially as many other governments seek to expand their production and use of drones.

The dangers of slippage are clear. Already under the cover of the war on terror, some states have challenged the fundamental premises of the protection of civilians in the Geneva Conventions, by including more civilians in their definition of combatants, and pushing the boundaries of acceptable “collateral damage.”

After two long and costly wars in Afghanistan and Iraq, the United States is set to double its spending on drones over the next decade to more than $11 billion. This is an understandable choice. Senior defense officials say that remotely piloted aircraft can be flown for hours over treacherous terrain and great distances waiting to surgically shoot Hellfire missiles at enemies visible perhaps only for just a few minutes. The danger to soldiers – and the financial and political costs of deploying them – they argue, is massively diminished. Moreover, it’s a more surgical enterprise: on-board cameras give “pilots” hundreds or thousands of miles away a clear picture of the target and any civilians who might be in the way.

But beyond being of dubious legitimacy under international law, the use of such technologies may be counter-productive. In Pakistan, Somalia, and Yemen, unmanned planes are being flown by the CIA – an organization that clearly lacks the military’s culture and training in international humanitarian law.

Meanwhile, Washington interprets within its rights under the war on terror the use of lethal force against enemies in a foreign country when that state “consents or is unable or unwilling” to act. While Pakistan’s position in the past has been ambiguous, the government said publicly just this month that drone attacks are illegal and violate its sovereignty and territorial integrity. But even this clear expression hasn’t stopped the Obama administration’s use of this tool.

Accountability has also declined as the use of drones has expanded. Top al Qaeda suspects were once carefully vetted for assassination, but the list for these killings has grown; targets now include, for example, drug lords in Afghanistan and militants in Somalia. Operations are conducted in isolated areas under the utmost secrecy, making it virtually impossible to determine who has been killed or injured, and whether the strike complied with the laws of war. Recent studies estimate that one civilian dies for every four to five suspects killed.

Many modern armies claim to be increasingly attentive to their legal obligations. But at the same time, they seem ever more reluctant to account for their actions publicly and transparently. This may be an unintended consequence of their perceived expanded exposure to prosecutions, whether before the International Criminal Court or elsewhere.

For instance, as much as the NATO leadership might be satisfied with its campaign in Libya, there has still been no transparent assessment of the number of civilians who were killed in the U.N.-authorized airstrikes there, which included the use of drones, and of the circumstances of their deaths.

While these strikes are described as clinical and surgical, there is no independent way for the public in NATO countries to evaluate the extent of their impact on civilians. It may well be that the requirement of proportionality in the laws of war – that civilian casualties not be disproportionate to the legitimate military objective of the operation – is satisfied in a given operation. But this cannot be taken for granted, particularly if these supposedly precision operations result in one civilian killed for every five combatants.

As NATO countries prepare to withdraw thousands of troops from Afghanistan and expand their drone programs commensurately, they must carefully weigh the policies and practices for using a weapon that distances them from the human, political, legal, and moral costs of war. Right now, Illinois authorities are doing just that – debating the legal and ethical implications of using drones in non-lethal police work over cities like Chicago. The leaders of NATO member nations might want to look up when they’re in Chicago this weekend and take note. They too must clarify under what conditions these hi-tech weapons should be used, who might constitute a legitimate target, and ultimately ensure that their use respects international law.

Up Next
Commentary / Global 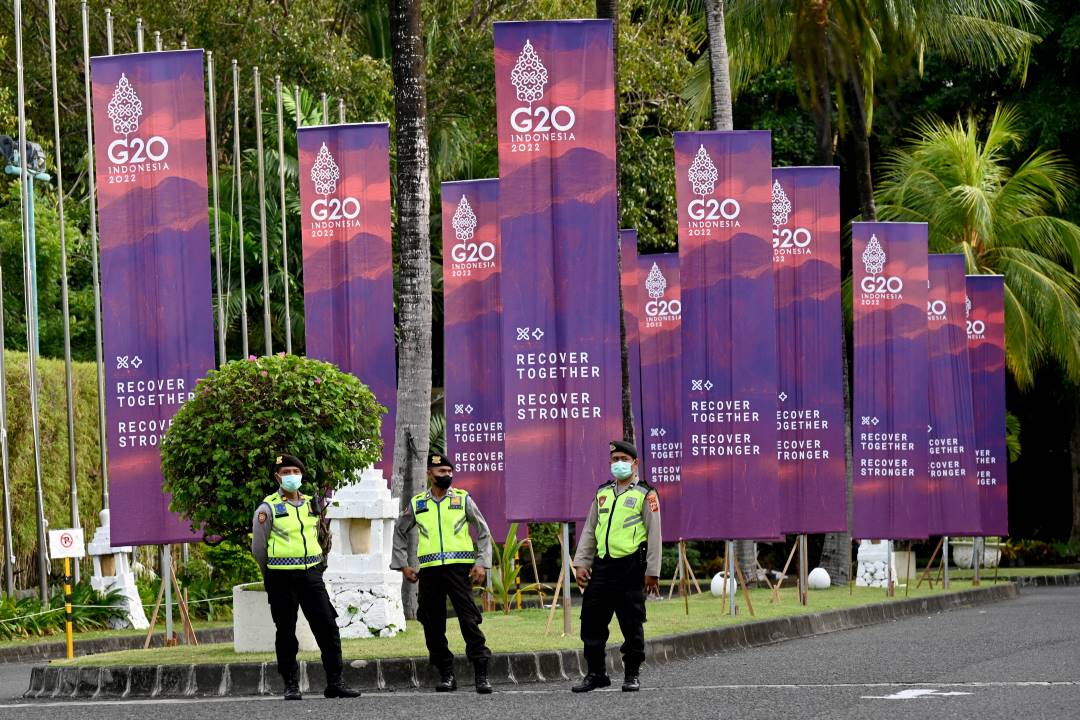 Members of the police stand in front of banners of the G20 summit near a venue for the G20 Finance Ministers Meeting in Nusa Dua on Indonesia's resort island of Bali, on July 14, 2022. Sonny Tumbelaka/Pool via REUTERS
Commentary / Global 10 November 2022