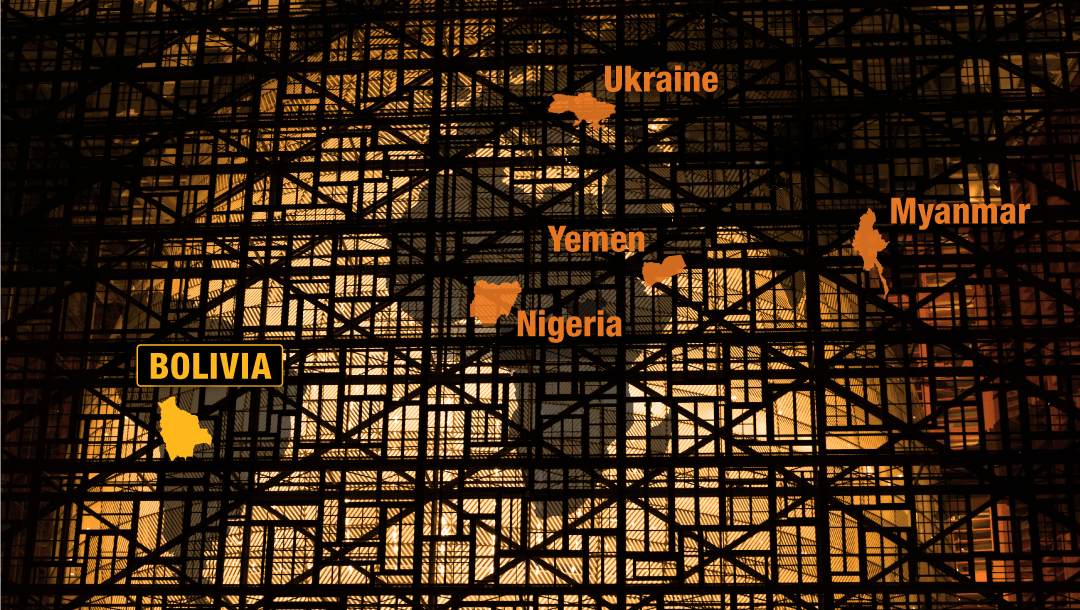 The turmoil that followed Bolivia’s disputed 2019 election has subsided, but the country’s deep political wounds remain unhealed. Credible and largely uneventful polls in October 2020 installed Luis Arce as president and returned Evo Morales’ Movement to Socialism (MAS) to power, laying to rest fears that a fresh election dispute would trigger another round of unrest. But while citizens’ faith in the electoral authorities has mostly been restored, the tensions of the past two years linger on.

Fierce disagreement persists about the 2019 polls, which led to Morales’ resignation and were declared null after a wave of post-electoral violence. On one side of the political divide are those who continue to see that election as an attempt at massive fraud aimed at prolonging Morales’ grip on power beyond constitutional limits; on the other are those who regard it as a coup orchestrated by Bolivia’s white elites, the military and their international allies, including the Organization of American States (OAS). Political polarisation deepened under the right-wing interim government led by Jeanine Áñez, which held power between the two elections, and was widely seen to be persecuting MAS members and political allies. Now that the MAS has come back to power, Áñez and several of her ministers have been jailed, stirring up still more political resentment and mistrust, and reinforcing the perception that the courts are in thrall to the government and bend to its dictates.

The path to reconciliation is hardly clear.

The path to reconciliation is hardly clear. President Arce came to power offering conciliatory rhetoric, and his government quickly unveiled an ambitious proposal to overhaul the politicised judicial system, which is a perennial source of partisan division. But any hope for a new tone disappeared in the rancorous run-up to regional and local elections, in which the MAS fared poorly amid growing internal tensions. Public discontent with the government, meanwhile, is mounting over poor management of the pandemic and a deepening economic slump. Although the EU and UN, as well as politicians such as Vice President David Choquehuanca and presidential runner-up Carlos Mesa, have mooted various plans for political and social reconciliation, their prospects look remote.

In these circumstances, the European Union (EU) and its member states should:

Arce was elected president of Bolivia with 55 per cent of the vote after a turbulent year during which the administration of interim President Áñez was accused of human rights violations and using the pandemic to remain in power beyond its mandate. The election went smoothly. With EU and UN support, and with the widely respected Salvador Romero at the helm of the Superior Electoral Tribunal, the electoral authorities persuaded most Bolivians that the polls were free and fair. But peaceful polls and a landslide victory for the MAS over centrist Mesa (of the Civic Community party) and right-wing radical Luis Fernando Camacho (of the Creemos party) did not mean that Bolivia has united behind the MAS, as the results of March’s local and regional elections proved. The party won only three of nine races for state governor, and it now controls only two of the country’s biggest cities.

There are several explanations for the MAS’s lacklustre showing in the March polls. Back from exile in Argentina, Morales took control of the campaign. He placed his preferred candidates on the MAS slate, shunted aside popular figures such as Eva Copa, the young woman who led the Senate under the interim government, and turned off some traditional MAS voters in the process. The party also lost the support of voters who had expected the Arce administration to chart a course to domestic reconciliation, and who were disappointed when the new president declared a broad amnesty protecting his allies from being charged with serious crimes committed during the Áñez administration’s tenure. Morales found himself openly confronted by disgruntled former supporters, and well-known candidates defected from the party.

The new MAS-led government also faced growing criticism over its handling of COVID-19, especially regarding a lack of vaccines, and the public perception that it is not doing enough to respond to the related economic crisis. These widening divisions within the party as well as the MAS’s loss of support among its traditional constituencies represent a major shift in Bolivian politics. For example, many Aymara, an indigenous group that has historically supported Morales, shifted their allegiance to a new party founded by ex-MAS members, Jallalla. Significant numbers of small-hold farmers and the urban poor, who in the past were core MAS supporters, switched to other indigenous and leftist parties, such as Movement Third System.

At the same time, the opposition has fragmented. The election of Camacho, who in 2019 mobilised thousands of supporters to demand Morales’ removal from office, as governor of Santa Cruz proved his enduring popular appeal among hardline opposition forces in some areas. Mesa’s Civic Community, a more moderate movement, holds 30 per cent of the seats in parliament, but was essentially absent from the local election battle.

Political manipulation of the judiciary, widely known in Latin America as “lawfare”, has become one of the most distinctive and divisive characteristics of Bolivian political life. In the aftermath of the 2019 election, the Áñez administration brought politically tinged charges against Morales and others for sedition and terrorism. In turn, the Arce administration is levelling similar charges at Áñez, leading to her imprisonment since 12 March.

While evidence suggests that Áñez should face trial for grave crimes committed during her administration’s tenure, including the massacres of Senkata and Sacaba where at least nineteen people protesting Morales’ ouster were killed by Bolivian security forces, the way the Arce administration is prosecuting her is likely to increase the public’s sense that the judiciary is politicised. Among other issues, the constitution provides that former presidents are immune from normal prosecution through judicial channels for their actions while in power, and that they can only be tried by Congress. But in the present case, the government has determined that it lacks the votes in parliament to secure a guilty verdict, and admitted that it is therefore building a case against Áñez in the courts (which are widely viewed as lacking independence) based on her alleged role in what the administration characterises as a coup against Morales, despite scant evidence of her involvement.

Human rights organisations issued rapid condemnations of the Bolivian government’s imprisonment of Áñez and apparent use of the justice system to perpetuate a cycle of political revenge. The EU, UN, OAS and U.S. were similarly critical. This outside pressure helped convince La Paz not to file charges against other members of the interim government, but Áñez remains in jail, and some MAS factions have pushed back hard against the criticism, including through social media attacks on a disapproving European Parliament resolution. It is unlikely that these factions will soften their stance.

Efforts to reform the judicial system and break the cycle of revenge justice have thus far made little headway.

Against this backdrop, efforts to reform the judicial system and break the cycle of revenge justice have thus far made little headway. A reform proposal advanced by Justice Minister Iván Lima in December 2020 foundered in the face of lack of political backing from MAS leadership. A proposed referendum that would alter the way in which judges are elected – which now allows the party controlling Congress to decide who is on the slate – has been postponed until after the next judicial election, scheduled for 2023. Several high-profile members of an advisory council formed by the Arce government to pilot judicial reform have resigned, complaining that they had met only once.

Recommendations for the EU and Its Member States

To avoid a repeat of the violence that followed the 2019 elections, it will be important for Bolivian authorities to continue building public confidence in the electoral system. The EU should impress on the Arce administration the importance of maintaining an independent and impartial Superior Electoral Tribunal, and work closely with Dina Chuquimia, who replaced Romero after his resignation, to build on the progress achieved over the last year.

Additionally, the EU, in partnership with the UN, should continue to provide support to the Tribunal to strengthen its ability to run transparent and reliable elections, through technical assistance to improve vote counting; the purchase of better equipment and electoral materials; the design of a communications strategy that explains to the public the vote-tallying process and strengthens faith in its transparency; and the training of Tribunal staff, among other measures. Similarly, the Ombudsman’s Office and others have identified specific weaknesses in local electoral bodies that need to be addressed – in particular better training of local staff, guaranteeing that poll workers speak the indigenous language of the surrounding area and providing election materials that help voters understand their choices. The EU and member states that are already active in this area, such as Sweden, should extend their partnership with the UN and other donors to provide these electoral authorities with the technical and material support they require.

Given the corrosive and polarising impact of perceived judicial partisanship on Bolivian politics, the EU should also work with the Arce administration where possible to advance judicial reform efforts. Even if key parts of the planned reform are on hold, the EU and member states should continue to insist on improving the justice system, and press, among other things, for an increase in spending in this area (currently only 0.38 per cent of GDP) to allow for the creation of specialised courts, the appointment of more judges to ease case delays in the courts, and broader public access. The Arce administration should signal its commitment to ending politicised justice by developing a strategy to ensure that Áñez is treated in accordance with the constitution.

The EU could also support the justice ministry in pushing forward changes it has highlighted as priorities and that have broad political support; for example, modifications to Law 348 to Guarantee Women a Life Free of Violence. Bolivia has one of the highest numbers of femicides on the continent, and high levels of violence targeting women in politics. It could also partner with suitable national institutions and organisations to help modernise judicial bodies and give all Bolivians access to the judicial system.

Finally, together with the UN and Catholic Church, the EU should keep mediating political and social disputes that threaten to spill over into violence, as it has done since 2019. More substantial steps toward political reconciliation of the sort proposed by Mesa – including freeing political prisoners, prosecuting violent acts that took place between October 2019 and October 2020 (which would require reversal of the amnesty), and reinstating the two-thirds majority for certain legislative procedures to encourage greater inter-party cooperation (a threshold abolished in October 2020 by the MAS-controlled Assembly) – have been dismissed by the MAS but should still be on the table.

The EU and member states, together with well-regarded institutions such as the Catholic Church, should additionally offer political and, where needed, financial support for dialogue-based initiatives around specific issues that have established their worth. For example, altercations recently flared among coca growers (controlled growth of the plant is legal in Bolivia) after the government decided to move the location of one of two national coca markets, leading to protests and then a violent crack­down on protesters’ roadblocks. International mediation on issues such as this one could help minimise the chances that local frictions provoke wider unrest and instability, and progressively build the conditions for a national reconciliation process.