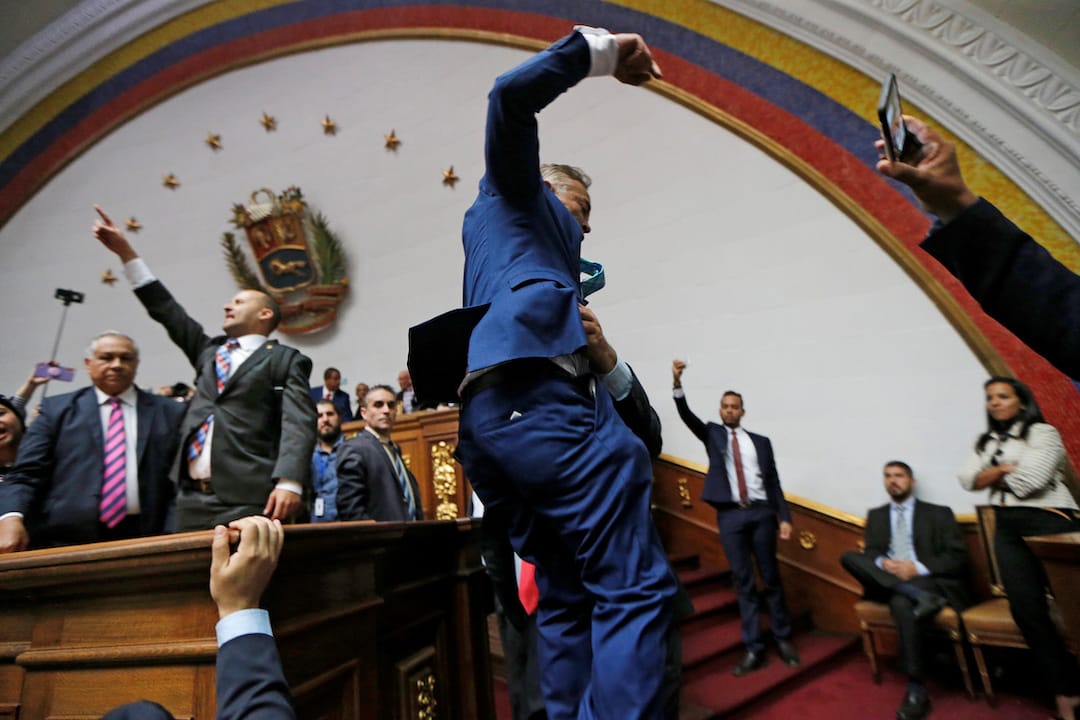 The government of Nicolás Maduro has seized control of Venezuela’s parliament, robbing the opposition of its platform for negotiating a way out of the country’s political crisis. An already long, damaging conflict could drag on if outside powers cannot persuade the government to reverse course.

On 5 January, Nicolás Maduro’s government made a bold attempt to end its year-long standoff with opposition leader and chair of the National Assembly Juan Guaidó, whom dozens of countries – including the U.S. – recognise as Venezuela’s legitimate president. The government ordered the National Guard to obstruct opposition deputies’ access to parliament, allowing government supporters to prevail in a sham vote to impose a new Assembly chair. The move stymied Guaidó’s expected ratification in that post but it did not resolve the struggle over the presidency. Moreover, it came at the cost of further sapping the government’s international legitimacy and deepening the country’s protracted crisis. Unless the government swiftly reverses course, its ploy could postpone, perhaps indefinitely, the negotiated solution that is the only way out.

The Maduro government chose unexpectedly thuggish tactics to seize control of the Assembly.

The Maduro government chose unexpectedly thuggish tactics to seize control of the Assembly. But it had already stepped up its intimidation of parliament as, emboldened by its survival of Guaidó’s challenge to date, it sought to eliminate the constitutional basis for his claim to the presidency. Opposition MPs say government agents have offered them bribes running into the hundreds of thousands of dollars to switch sides. To date, the government has subjected 29 MPs to judicial persecution despite their parliamentary immunity; most are in exile, some are taking refuge in embassies and two are in jail. Meanwhile, Guaidó recently suspended ten deputies from their parliamentary duties amid corruption allegations, after press reports linked them to efforts to launder the reputation of businessmen involved in the government’s graft-ridden food distribution schemes.

Parliament “elected” one of these deputies, Luis Parra, to replace Guaidó on 5 January, though the session lacked a quorum since many opposition members, along with most of the independent press and foreign diplomats, were stuck outside. Maduro celebrated the change of leadership in a television address a few hours later, saying the way was now clear to hold parliamentary elections later this year in which “all opposition parties” would participate. Meanwhile, the opposition majority ratified Guaidó as head of parliament after conducting a legislative session in an auditorium belonging to a newspaper.

The resulting split between a government-controlled assembly of dubious origin and a legitimate parliament stripped of its physical home and legal status is another escalation of Venezuela’s long-running political conflict. Since December 2015, when the opposition alliance retook the National Assembly from the left-wing nationalist movement started by the late president Hugo Chávez, the government has waged a war of attrition on the legislators’ powers. At the same time, it used its influence over the electoral authorities to ensure a string of victories at the ballot box, culminating in Maduro’s disputed re-election in 2018.

On 23 January 2019, Guaidó launched his campaign to dethrone Maduro, declaring himself interim president. Nearly 60 countries, including the U.S., most EU member states and many of Venezuela’s most powerful regional neighbours, granted recognition. Predictions of Maduro’s imminent demise, however, proved premature. Sanctions imposed by Washington have so far failed to dislodge him, and the armed forces’ upper ranks have remained mostly loyal. An initial wave of enthusiasm among opposition supporters, which brought tens of thousands into the streets for frequent mass rallies, subsided, especially after 30 April, when Guaidó called for a military uprising that sputtered out. Even so, the government refrained from jailing Guaidó or closing down parliament altogether.

The cost of this ever more acrimonious battle for power is felt primarily by Venezuela’s people.

The cost of this ever more acrimonious battle for power is felt primarily by Venezuela’s people. The country is in the throes of economic depression combined with hyper-inflation. Gross domestic product has declined by over 60 per cent since Maduro took office in 2013, while a humanitarian emergency has forced almost one in six Venezuelans to flee the country. Public services, including electricity, water, transport and health, are on the verge of collapse, while many parts of the country are dominated by armed groups of various kinds, from criminal gangs to Colombian guerrillas.

Negotiations between May and August last year – held under Norwegian government auspices – showed that powerful factions on both sides recognised the need for a political agreement to break the destructive stalemate. But the differences between the sides proved insuperable, and the talks broke down in September. In conspiring to assume control over the National Assembly, the government has taken a profoundly misguided step toward erasing any possibility of returning to talks. In effect, it has empowered opposition hardliners who dismiss the prospect of a political settlement and deprived the opposition of the platform that enabled it to take part in negotiations.

Foreign governments supportive of Guaidó, as well as regional powers such as Argentina that do not regard him as president, repudiated the government’s actions, indicating that they would recognise neither Parra as parliamentary chair nor the legitimacy of the Assembly over which he presides. Mexico, which has maintained a neutral stance with respect to Venezuela, also called for the Assembly’s new authorities to be democratically elected. Nonetheless, having lost physical control of the parliament building, along with any vestigial protection their status afforded them, opposition leaders are now even more vulnerable to being jailed or exiled. The prospect of a “government-in-exile” looms. Some on the opposition’s radical wing, who believe that force, perhaps including foreign military intervention, is the only solution, welcome this scenario. They showed their enthusiasm for the new situation by voting for Guaidó, having previously dismissed him as a sellout.

At the same time, the prospect of opposition parties taking part in parliamentary elections later this year under a reformed National Electoral Council (CNE), whose notorious pro-government bias has been a major obstacle to free elections, would now seem remote at best. Under the terms of its September agreement with several small opposition parties – the so-called National Dialogue process – the government had made certain concessions aimed at restoring normal political life in Venezuela. These included the return of chavista MPs to parliament, which they had been boycotting, and the promise of negotiating fresh appointments to the CNE.

While the minority parties had made clear that they would take part in parliamentary elections, the mainstream opposition was split. Control of the Assembly, which is charged with appointing CNE board members, opens the way for the government once again to stack it at will. Even if the mainstream opposition parties were to take part in the parliamentary poll, the chances of persuading opposition voters to turn out in sufficient numbers are slim at best. And while Maduro claimed in his speech that the government would immediately meet with its National Dialogue partners, some of them were highly critical of the move to seize parliament.

It seems hard to envisage how negotiations of the sort backed by Norway can resume now.

Finally, it seems hard to envisage how negotiations of the sort backed by Norway can resume now that the government has deprived the opposition of its last domestic democratic foothold. De facto control is now more than ever in the hands of Maduro, who has seemingly opted for a strategy of resistance at all costs. The U.S., Europe and Latin American governments have been virtually unanimous in condemning the government’s power grab. But those seeking a solution to the Venezuelan crisis face a dilemma. There is little or no appetite for military intervention, and even if there were, it would likely prove disastrous. Yet the status quo comes at a heavy price: the exodus provoked by Venezuela’s socio-economic meltdown is placing an intolerable burden on neighbours, particularly Colombia, which has absorbed at least 1.6 million Venezuelan refugees.

The immediate and understandable reaction will be to ratchet up sanctions. But despite assurances from Washington that sanctions will, in time, force the government to capitulate, the fact is that such penalties rarely if ever produce regime change and mainly make life more miserable for ordinary citizens. Insistence on Guaidó’s legitimate claim to the post of Assembly chair is important; outside powers should also refuse to respect any acts ratified by the parliament headed by Parra. But foreign supporters of the opposition should also quash the notion of mounting a government-in-exile, which would do little to bring relief to the Venezuelan people or to broker a lasting political solution.

Venezuela badly needs a political settlement that can begin to lay the basis for the recovery of its economy and the reconstruction of its institutions.

For the moment, Maduro has fended off the challenge from Guaidó and his foreign allies. The economy stumbles along, helped out by the de facto dismantling of price and exchange controls, the increasing use of the dollar as a medium of exchange, and assistance from Russia and others with sanctions evasion. But only a fraction of the population has access to dollars, and there can be no economic revival without an end to sanctions and a comprehensive reform package. Even those foreign powers willing to help out, such as Russia, may be privately unimpressed by the way the government seized control of parliament and disinclined to regard the legislature in its new guise as a legitimate body for the purposes of ratifying treaties, contracts and other international documents.

Venezuela badly needs a political settlement that can begin to lay the basis for the recovery of its economy and the reconstruction of its institutions. But as a result of the government’s thirst for unassailable power, the possibility of a longer and more ruinous conflict has arisen, while the case for negotiations has suffered a debilitating wound. Only concerted pressure from as broad a spectrum of nations as possible and a rapid about-face from Caracas can restore hopes of a political settlement.

Video - Conflict and Compromise in Venezuela: The Two Sides Speak

Peace in Venezuela: Is There Life after the Barbados Talks?