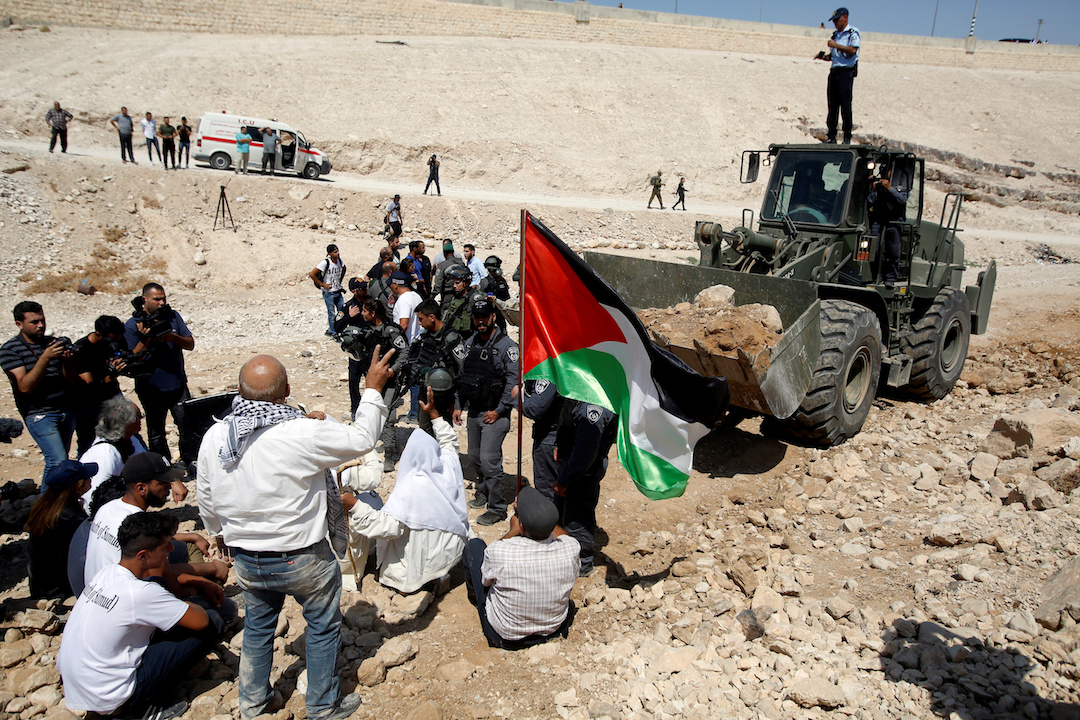 Palestinians gather in front of an Israeli bulldozer as they protest against Israel's plan to demolish the Palestinian Bedouin village of Khan al-Ahmar, in the occupied West Bank on 14 September 2018. REUTERS/Mussa Qawasma.
Statement / Middle East & North Africa 15 December 2020

Three Pillars for a New U.S. Approach to Peace in Israel-Palestine

Come January 2021, the Biden administration will face the responsibility of mitigating harm caused by President Trump’s destructive policy toward the Israeli-Palestinian conflict. Its challenge will be to undo Trump’s legacy without merely rewinding the tape to the situation that existed prior to his presidency.

This publication is part of a joint initiative between the International Crisis Group and the United States/Middle East Project (USMEP) to help resolve the Israeli-Palestinian conflict.

The Israeli-Palestinian conflict is unlikely to be a priority for the new U.S. administration, but the conflict’s trajectory and its implications for U.S. interests should nonetheless concern U.S. policymakers. The new administration should learn the lessons of the past: it should be both ambitious in terms of seeking to change the terms of debate and modest with regard to the possibility of ending the conflict anytime soon.

Over the years, U.S. policies have had the unfortunate – at times unintended – effect of facilitating entrenchment of Israeli control over Palestinians. The unintentional became clearly purposeful under the Trump administration, which has encouraged settlement construction and released a “Peace for Prosperity Plan” that tilted decisively in favour of Israel’s continued occupation. U.S. engagement should at a minimum aim to mitigate the fundamental asymmetry of power between Israel and the Palestinians; instead, it too often has done the opposite, and the Trump White House did that to an extreme.

What is needed today is not a Nobel Prize-grabbing reach for a final peace deal but rather patiently putting in place those building blocks that are required to steer future generations of Israelis and Palestinians to a more peaceful and just future. Those building blocks include: an Israeli public that understands the consequences of permanent occupation and that the only way to avoid those consequences is to engage Palestinians both individually as equals and as a collective with aspirations to national self-determination; a coherent Palestinian polity with a leadership that can effectively chart a path forward and challenge the status quo by non-violent means and in ways consistent with international law; and a reversal of on-the-ground, legal and political trends that have savaged the diplomatic landscape and failed to ensure Palestinians their most basic human rights.

Focus on these building blocks would help change the lens through which the conflict has tended to be viewed in Washington, away from an emphasis on pursuit of a process for the sake of a process, and toward establishing conditions for meaningful talks while protecting those whose rights are being violated in the area stretching between the Jordan River and the Mediterranean Sea. The incoming administration almost certainly will make clear that a two-state solution is its preferred political framework, along the lines of the international consensus reflected in Secretary of State John Kerry’s 28 December 2016 speech. In this context, the U.S. should also make clear that in the event Israel continues to obstruct the establishment of a fully sovereign and viable Palestinian state, any alternative will have to respect the right to full equality and enfranchisement of all those in any space controlled by Israel.

Accordingly, the point of departure for a new Israel-Palestine policy should rest on the following three pillars:

There are other elements, of course. President-elect Biden welcomed normalisation deals between Israel and several Arab countries and his administration can be expected to pursue more. But in doing so, it should ensure such deals contribute to, rather than detract from, the well-being of Palestinians and resolution of the conflict, and more broadly advance regional de-escalation and peace. Too, a Biden administration should embrace a multilateral approach to the conflict, coordinating with Europe and actively reintegrating Jordan into its efforts.

The broader point is this: the Biden administration could be tempted to limit its engagement on Israel-Palestine to mitigating the Trump administration’s damage and restarting negotiations. That would be understandable but ineffective. The likely outcome of such an approach would be consolidated Israeli control over Palestinian territories, further Palestinian fragmentation, and rising frustration and despair. To steer the parties back to a place where a forceful diplomatic push might be productive, the Biden administration would be better advised to pursue a policy that is faithful to its stated commitment to international norms, respect for human rights, multilateralism and diplomacy.

The views represented in this report do not necessarily reflect the views of the members of the USMEP’s International Board and Senior Advisors.

Israel, the UAE, and Normalisation