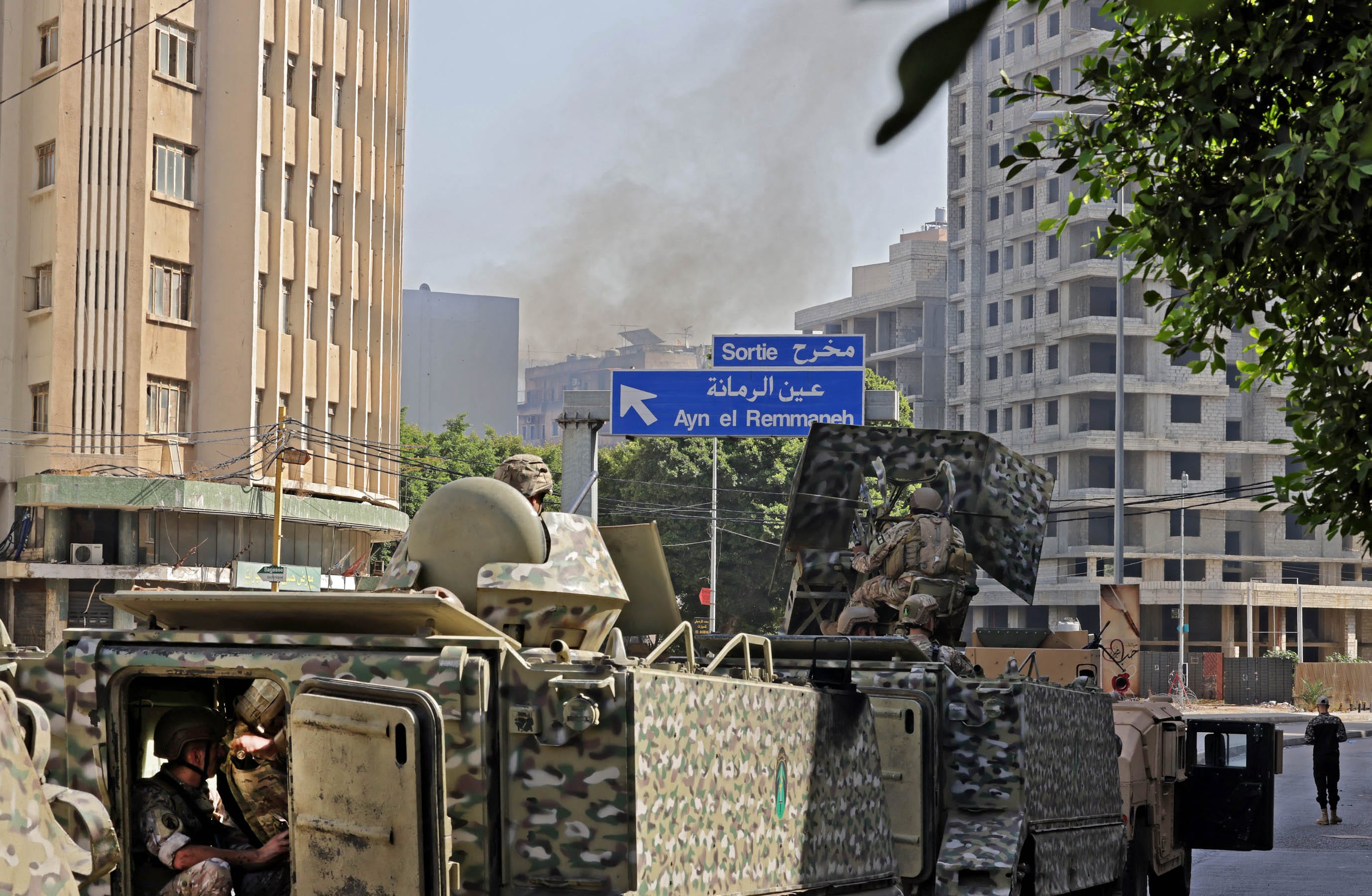 Smoke billows as Lebanese Army soldiers take a position in the area of Tayouneh, in the southern suburb of the capital Beirut on 14 October 2021, after clashes following a demonstration by supporters of Hezbollah and the Amal movements. JOSEPH EID / AFP
Alert / Middle East & North Africa 18 October 2021

Clashes on 14 October over a judicial investigation into the 2020 Beirut port blast evoked the sectarian divisions of Lebanon’s civil war and threatened what's left of the rule of law. Hizbollah must allow the investigation to proceed or risk further weakening of the state.

A new round of violence in Lebanon has claimed seven lives and called into question the viability of an independent judicial investigation into the causes of the devastating August 2020 Beirut port blast. Shooting broke out in Beirut on 14 October when supporters of the Shiite parties Hizbollah and Amal marched to the Palace of Justice, located in a Christian neighbourhood, to demand that a judge investigating the port explosion be replaced. Resort to arms by those parties, as well some of their opponents, and the increasingly sectarian nature of violence in Lebanon evokes the divisions of the country’s 1975-1990 civil war. Hizbollah, which has the capability to lower the flames, should do so, and allow judicial institutions to do their work. External actors should use their leverage over Lebanon’s political leaders to persuade them to respect the rule of law and let the investigation proceed if the country is to emerge from its compound crises.

Crucial facts about the 14 October incident – who fired first and who shot to kill the seven victims who lost their lives that day, all Shiites and most of them supporters of the two Shiite parties – remain furiously disputed. Clear answers to these questions are likely to remain elusive. What is clear, however, is that the conflict over the port investigation is pushing Lebanon further down the road to state collapse.

Hizbollah and its allies have made clear that they want the judge, Tareq Bitar, removed at any cost. Three of the four former ministers he has called in for questioning are prominent members of their political camp. Hizbollah claims that the investigation is biased and reportedly expects to be incriminated, in its eyes unjustly. Already, several ministers aligned with the pro-Hizbollah camp have threatened to suspend their participation in the new government of Prime Minister Najib Mikati, which took office barely a month ago after a thirteen-month stalemate over government formation that saw the Lebanese economy and people’s living conditions plummet precipitously.

The unrest puts the Mikati government in an impossible position.

The unrest puts the Mikati government in an impossible position. Yielding to Hizbollah’s pressure will enhance the perception, already held by many, that Mikati is little more than a front for the Shiite party’s unfettered domination. It would cast great doubt on any hopes that Lebanon could return to a place in which officials are bound by law and held to account when they violate it. The idea that international financial institutions and governments would entrust authorities and a political elite that cannot uphold the basic rule of law with the massive assistance that Lebanon so desperately needs is plainly unrealistic.

Yet the prospects for what may happen if Judge Bitar persists in his investigation and events continue on their current course are chilling too. Attempts to execute the subpoenas and arrest warrants he has issued may set branches of the security sector that lean toward different political camps against one another and against Hizbollah. The party may call for more protests against the investigations and would likely stage these with a heavy security presence, citing the earlier violence.

With tension running high in a continued stand-off, Hizbollah may also decide to move against the Lebanese Forces, a Christian party it accuses of orchestrating and directing the killing of its supporters on 14 October. Hizbollah adherents quote “incontrovertible” evidence of the Lebanese Forces’ involvement and claim that the party is training cadres in order to rebuild some of the military capacity it had during the Lebanese civil war, when it ran one of the most powerful militias in the country, accusations that the Lebanese Forces reject.

Given the low trust Hizbollah evinces in the Lebanese legal system, it is not implausible that it may decide to hunt down the alleged perpetrators and organisers of the 14 October shootings, and teach its opponents a lesson at the same time. Worked up by an incendiary media campaign against the Lebanese Forces in pro-Hizbollah media, heavily armed followers of Hizbollah and Amal may decide to act even without orders, taking aim at a real or imagined Lebanese Forces presence in areas close to their own neighbourhoods. Judge Bitar, who is now routinely smeared as a U.S. agent in pro-Hizbollah circles, may himself be in danger, along with relatives of the port explosion’s victims, who have persistently held rallies to press for the investigation to continue but may now have reason to fear attacks on such gatherings.

The prospect of such developments may be enough to convince a growing number of Lebanese, in particular in areas adjacent to a strong Amal and Hizbollah presence, of the necessity to arm themselves or accept the presence of armed groups in their midst that promise protection. This puts Lebanon on a path to recurrent, violent security incidents, and worsening divisions reflecting those of the 1975-1990 civil war, that would indefinitely delay an escape from the crippling economic crisis.

More than any other actor, Hizbollah, given its outsized political and military clout, is driving the country down this path by throwing its weight behind the resistance of Amal and others to the investigations. Right now, the party appears determined to double down on the demand to depose Judge Bitar and feels aggrieved over the killing of its supporters in what it claims was a peaceful protest. Yet while the grief of the victims’ relatives is real, the party’s position is disingenuous. With its own displays of force, occasional outbursts of violence and disregard for the authority of the Lebanese state, it has nourished the belief among some of its opponents that taking up arms is appropriate, and indeed the only way to push back against perceived injustice. Its overmatched opponents are unlikely to put up a meaningful challenge, but the cycle of violence this may initiate has the potential to become enormously destructive, with the country disintegrating into areas controlled by rival security actors riveted by recurrent bouts of violence.

With the country at increasing risk of collapse, the decision Hizbollah needs to take is whether it wants Lebanon to have a functioning state.

With the country at increasing risk of collapse, the decision Hizbollah needs to take is whether it wants Lebanon to have a functioning state – a state in which it would still be the dominant force. This requires a minimum of respect for others, and for the workings of its institutions. The key criterion for the soundness of the ongoing port blast investigation can only be the quality of the evidence and the impartiality of the proceedings, not whether these are politically beneficial or damaging. Helping allies to obstruct the pursuit of justice arguably harms Hizbollah before anybody else. Not only does it put the party itself in the circle of suspicion, but it could push Lebanon further down a destructive path that will erase the party’s past political successes and preclude it from realising some of the future ambitions it may have.

Hizbollah must dial back its campaign against Judge Bitar and, at the same time, the judicial system conduct a thorough investigation into the violence on 14 October. The families of the seven killed that day deserve truth and justice just like the relatives of the more than 200 killed in the port blast, but any attempt to obtain justice outside the framework of Lebanon’s legal institutions can only lead to more violence, destabilisation and chaos.

External actors seeking to support Lebanon should make it clear to the Mikati government and all parties involved that basic respect for the rule of law and the port blast investigation will be a key condition for any substantial assistance to Lebanon. At the same time, they should use whatever forms of pressure they have, potentially including the threat of targeted sanctions, to deter politicians from obstructing justice. Hizbollah will likely remain impervious to such pressure, but many among its allies seek to be seen as respectable political players rather than being publicly relegated to the ranks of rogue actors. They, along with anybody else who is in or may come into the spotlight of the investigation, need to be reminded that they, too, face an important choice.